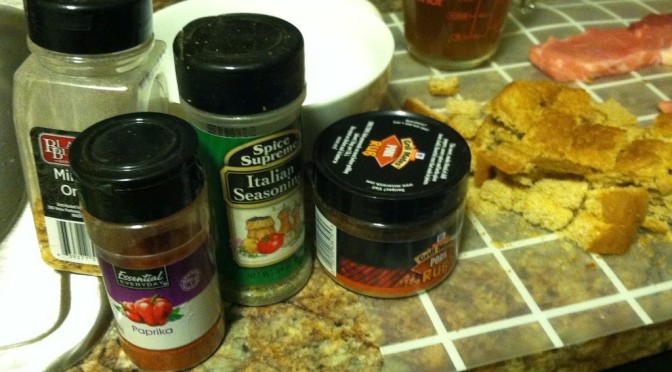 What would Thanksgiving be without stuffing? Incomplete, in my opinion. I had never made stuffing myself before (I know, pause to gasp in shock) and so as per usual, I turned to multitudes of online recipes, compared that to what I had in my kitchen, and then just dove in with both feet. Hands, actually. You’re welcome. To prepare for next week’s big day, I made some stuffing and wrapped it in a slab of pig. Because ‘Murica.

Stuffing is also called ‘dressing’, and rarely ‘forcemeat’ (because who wants to eat bread mush with a name like that?); it is a mixture of carbohydrates and occasionally other meats, sometimes with eggs mixed in. It is usually stuffed inside the body cavity of an animal (hence the name) and baked within it, then served alongside the meat. Records of various stuffing recipes exist as far back as the Roman Empire, which published a kitchen anthology titled Apicius which lists thousands of Roman recipes. An article from Kitchen Project goes more into detail about the history and evolution of stuffing if you’re interested or want to try something different this year. But if you love the old easy standby, Stove Top, don’t feel bad. Introduced in 1972 and now owned by Kraft Foods, they sell nearly 60 million boxes every year around Thanksgiving. That’s a lotta stale bread.

So with that in mind, let’s get to the stuffing of meats! For stuffed pork chops, I made the stuffing, pounded the meat thin, then rolled it around a gob of the bread mush. It tastes way better than I’m making it sound, trust me! This recipe can also easily be doubled, tripled, whatever, depending on how many you’re feeding. It can also be a great way to use up leftover pre-made stuffing in the days after Thanksgiving when you’re tired of just having it with turkey. 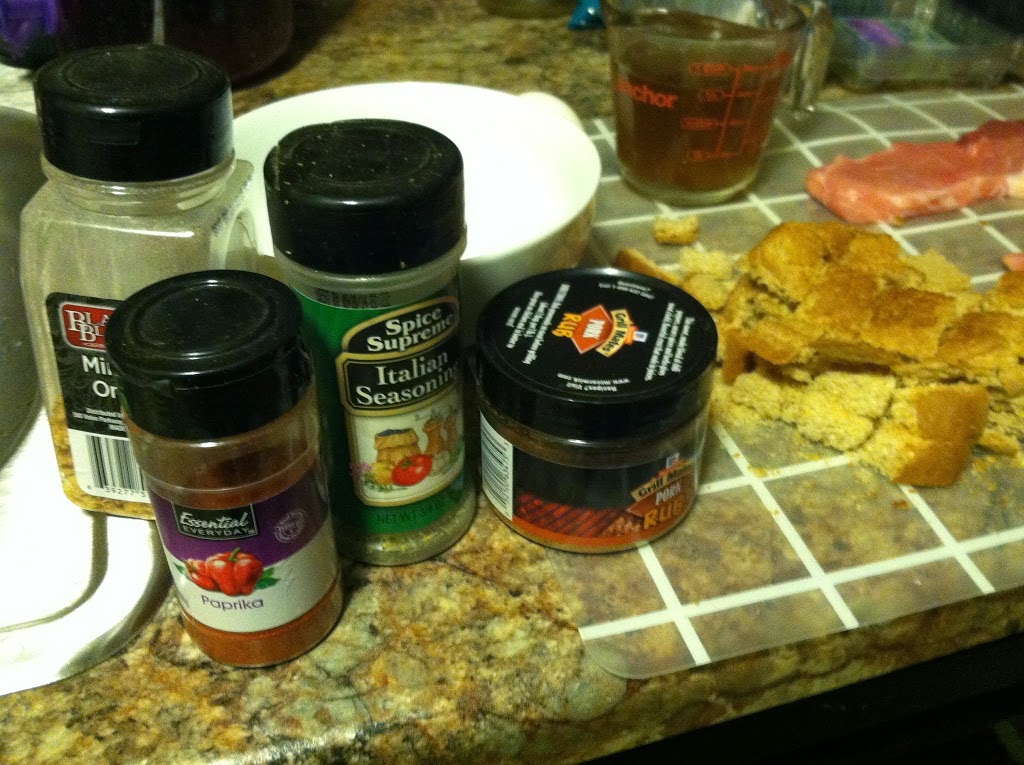 Step 1: Use fresh pork chops, or thawed if frozen. You’ll need to cover them with plastic wrap, then using a rolling pin or other such heavy, blunt object, pound the meat until it is about 1/4-1/2 inch thick. Ideally your chops will be wide yet long, so they can close around a cups’ worth of stuffing. 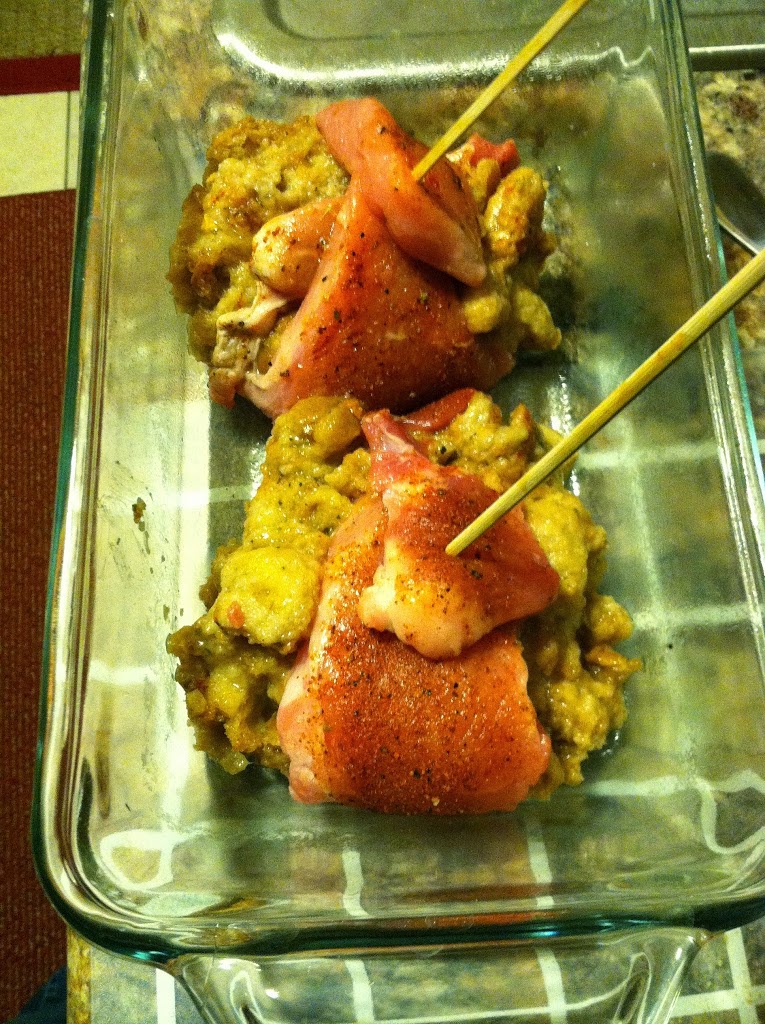 Step 2: Chop up the stale bread slices or lightly toasted bread into inch cubes. Put into a medium bowl, and mix in the broth and seasonings. You want the bread wet but not soupy. Finally add the egg to bind and mix it all well. This should make about 1 1/2 – 2 cups.

Step 3: Divide the stuffing between the two chops, and scoop a handful into the center of one. Roll up both sides so they touch or cross on top and secure with a toothpick or twine. 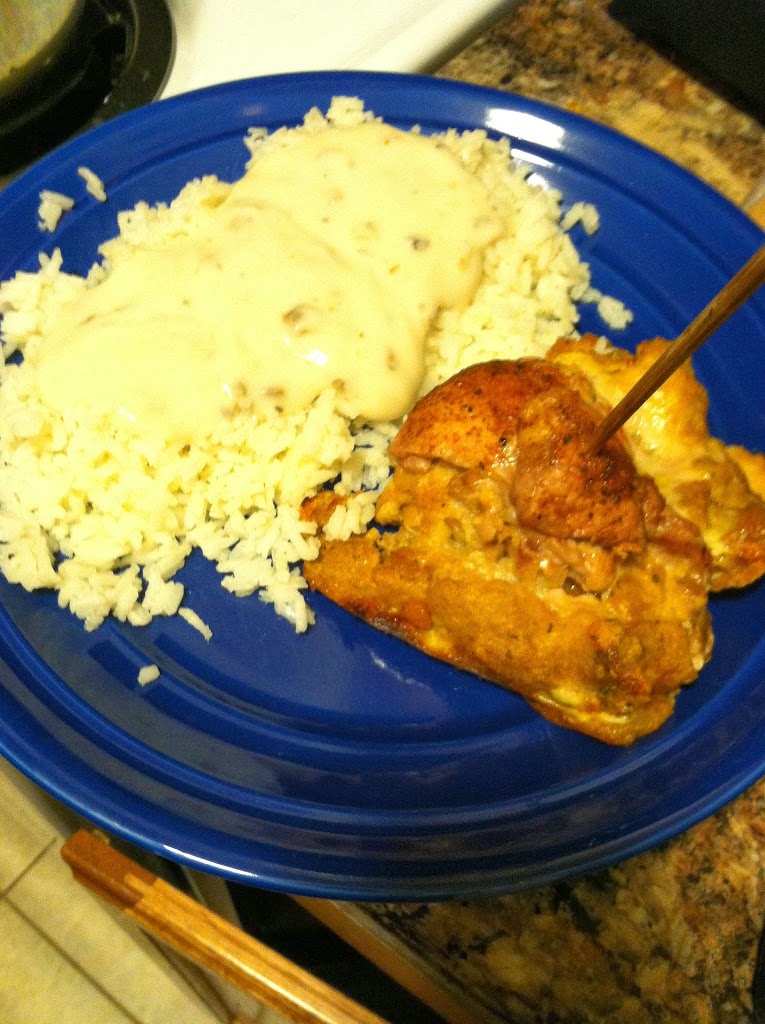 Step 4: Put the stuffed chops in an oven-safe pan and bake at 350 for 45-50 minutes, until pork is totally done, at least 145 degrees. The chops should be nicely golden and tender, the stuffing soft inside and crunchy without. Serve with side dishes of your choice. I made some rice and poured my ‘special’ mushroom gravy over it. (Secret: It’s a can of cream of mushroom soup. For reals.) 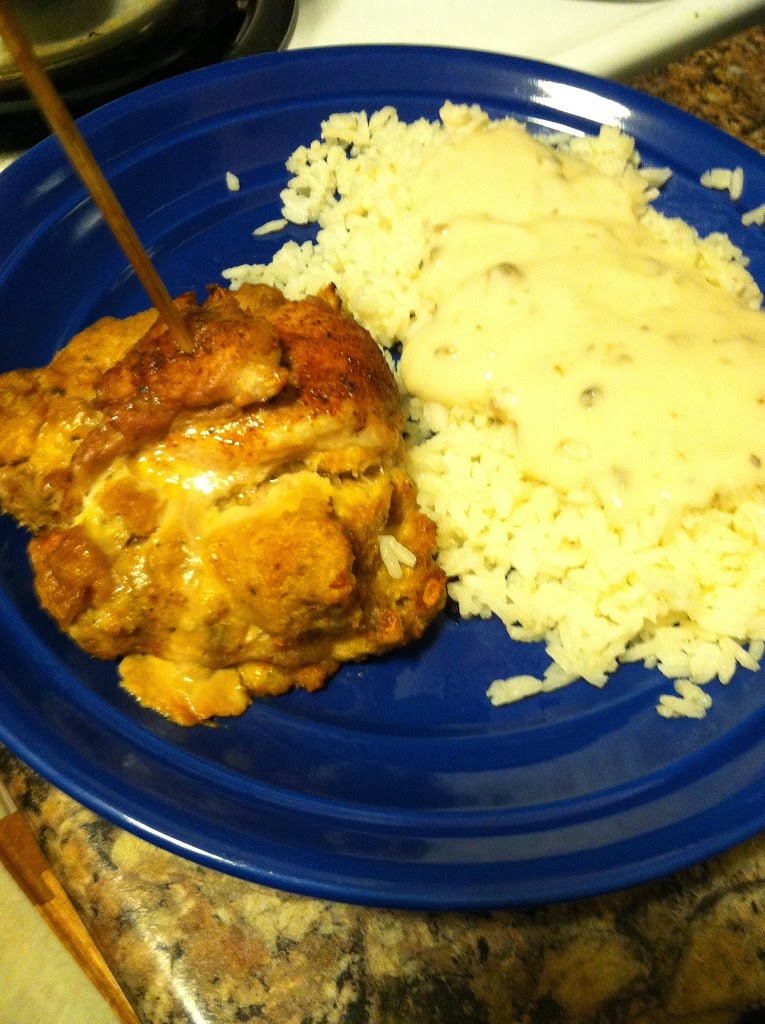 If you have a favorite recipe which uses up leftover stuffing after Thanksgiving, please share!