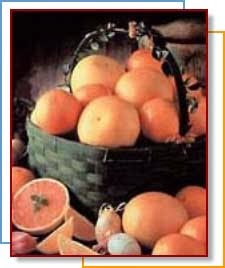 History of the Grapefruit

A grapefruit is indeed a fruit, but is definitely not like a grape. Nor is it purple. So how did it get its name? People who dedicate their lives to studying fruits are a subset of botanists called “pomologists”. According to the Library of Congress website, most pomologists agree that the grapefruit is a hybrid between a sweet orange and a pummelo.

The largest citrus fruit, the pummelo is native to Southeast Asia and it has white, pink, or red flesh and a thick pith. Learn more here. The original orange was likely crossed with a pummelo having pink flesh, as most grapefruit varieties are pink inside, though there are white and red varieties as well.

All citrus fruit are what is called “Hesperidum”, a large, modified berry with a thick outer skin called a rind. The rind is what you ‘zest’ on lemons and limes.

Grapefruit trees usually grow 16-20 feet tall, though they can reach up to 50 feet. The fruits tend to grow in clusters, which has been suggested look like a bunch of grapes, leading to the name grape-fruit. The rind is yellowy-orange and the fruit is largely a sphere, with segmented flesh. The redder varieties are typically sweeter, but all varieties have that acidic tartness for which the fruit is known.

In the USA, Texas is the state most known for producing commercial grapefruit. TexaSweet Citrus Marketing, Inc. has a page dedicated to the history of the grapefruit industry in Texas. In it they state that the first reported planting of a grove (large group of similar, fruit-bearing trees) in Texas was 1893. Those first trees were of the white varieties, followed soon after by the pink varieties. A developer from Omaha, Nebraska felt that these crops were the future of the state, and thus John H. Shary began combining his knowledge of the latest irrigation techniques with a determination to produce citrus commercially. Now known as the “Father of the Citrus Industry”, he shipped his first commercial crop in 1920.

Right around the Great Stock Market Crash of 1929 the first red grapefruit was accidentally discovered. In 1929 the first grapefruit patent was issued for the “US Ruby Red” of the Redblush variety. Many new mutations were found producing varying degrees of redness and sweetness, causing confusion in the market. Further laboratory breeding and experimentation lead to even more varieties. Finally Texas decided that to differentiate its red, sweeter fruit from others on the market, they would market crops under only two trademarked names, the Ruby-Sweet and the Rio Star.

My favorite way to eat grapefruit is just slice it in half, and sprinkle some sugar or sweetener over the halves. Cut along the white part to separate each chunk of flesh. Then dig each piece out with a spoon and enjoy! It’s an interactive healthy breakfast. You can use the peels to make Grapefruitcello, a super easy infused alcohol, too!

Benefits and dangers of grapefruit

As grapefruit became more popular, pop culture obsession with dieting created many grapefruit juice cleanses, grapefruit concentrate pills, and of course diets in which your main food is the grapefruit. WedMD has a breakdown of the classic grapefruit diet and considerations if you’re thinking of trying it. The benefits of grapefruit include:

While grapefruit may be a nutritional powerhouse, it can also cause health problems. Certain types of drugs become more potent when combined with grapefruit juice. Depending on the type of interaction, the drugs can become more or less bioavailable, accumulate in the blood or organs, or fail to metabolize. Certain compounds in grapefruit juice slow the body’s normal detoxification and metabolism processes in the liver and intestine. Grapefruit may inhibit cytochrome P450 enzyme, an important metabolizing enzyme, or P-glycoprotein, a drug transporter which shuttles chemicals into and out of the intestines.

Currently at least 85 drugs are known to interact with grapefruit compounds. Statins in particular can build up to toxic levels, which may result in the serious statin-associated disease rhabdomyolysis. This disease affects muscle tissue, and can cause temporary weakness or paralysis. These interactions may also be more severe in elderly patients. Doctors should be aware of these interactions and education patients about their particular risk, as each individual patients’ situation is variable. Check with a healthcare provider before starting a diet which regularly incorporates large amounts of grapefruit and/or juice.

For many other facts about grapefruit, including history, ways to use it in cooking, drug interactions, and nutritional facts, check out Vegetarians in Paradise, the Kitchn blog, 3 fat chicks on a diet, Wikipedia, ABCNews, or Health.com.

For a PDF of the Review article
Medicinal importance of grapefruit juice and its interaction with various drugs by Jawad Kiani and Sardar Imam.

Click if you’d like to read this article: The grapefruit: an old wine in a new glass? Metabolic and cardiovascular perspectives by Peter Owira and John Ojewole.