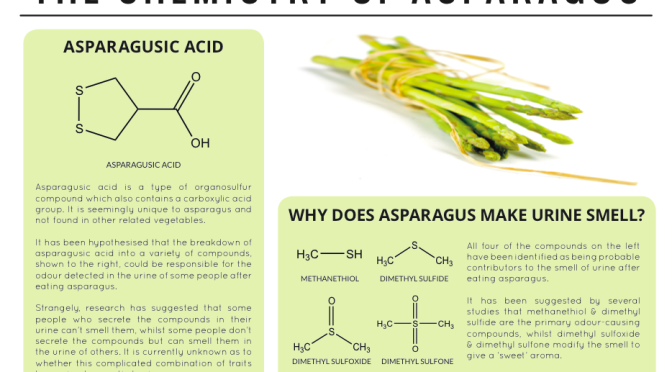 A common occurrence among those who eat healthfully or adventurously is finding certain foods have strange side effects. If you’ve ever eaten asparagus, in however small an amount, you may know what one of these side effects are. If you are not affected by asparagus after-effects, congratulations!

There are two possibilities: either you do not metabolize asparagus in such a way as to create the smelly compounds, or you cannot smell the compounds once created.

Both of these are true, the most recent study in the Oxford Journal of Chemical Senses found differences both among those who did or did not produce smelly urine, and among those who could and could not smell the difference. The authors state “The biological basis for the inability to produce the metabolite in detectable quantities is unknown, but the inability to smell the odor is associated with a single nucleotide polymorphism (rs4481887) within a 50-gene cluster of olfactory receptors”.

The Chemistry of Asparagus

Going from smell-less veggie to smelly urine is a chemical process. According to Dr. Roshini Raj, MD, assistant professor of medicine at New York University Langone Medical Center and author of What the Yuck?!, “Your body breaks down asparagus during digestion into sulfur-containing chemicals that give your urine a distinctive odor.” The mysterious pre-smell compound is called asparagusic acid, because as far as we know, it is only found in asparagus. When metabolized, it produces several sulfated volatile chemicals.

For a chemical to be “volatile” means that is has a low enough boiling point that it is a gas at room temperature. This means that the chemicals can leave the liquid urine and travel through the air to your nose. The original asparagusic acid is not volatile, so that’s why the vegetable itself doesn’t have the same “cabbage-y” smell. This smell has been noted for centuries, by some as famous a Ben Franklin. As yet, there is no way to eliminate this side effect other than by not eating this spring delicacy. But you don’t want to do that!

Whether you grow your own or buy it at a store/farmer’s market, asparagus is a great choice when it is early spring and in season. It is very low in calories, with only 20 calories per 100 g (about 4-5 spears). It also takes your body more calories to digest it than you gain because it is high in digestion-regulating, LDL-reducing fiber. Fresh asparagus is a great source of anti-oxidants like carotenes, lutein, and xanthins, as well as vitamins like thiamin, niacin, riboflavin (all the Bs), C, A, and E.

One cup of asparagus contains just over 100% of your daily recommended vitamin K, which helps prevent bone damage and neuronal harm, helping avoid neurological diseases like Alzheimer’s. It is also high in folate, which some people struggle to get enough of, especially pregnant mothers. Folate is necessary for DNA synthesis in all of your cells. Finally, it has several trace minerals and electrolytes our bodies need for blood pressure regulation, enzyme function, and respiration, like copper, iron, calcium, manganese, and potassium.


How to Grow Asparagus, or Choose it at the Store

Asparagus plants are slow-growing annuals that blossom in spring. Plant asparagus crowns by early spring, after the last frost. They will grow into tall, branched stems with fine, fern-like needles called phylloclades. A fully-grown plant can reach five feet tall! The edible spears we all know and love emerge from the extensive root system, and are harvested yearly in early spring.

The first year after planting seeds or seedlings you should not harvest, but allow plants to grow. The following year and up to 25 years beyond, enjoy fresh asparagus every spring! Typically, young shoots are harvested when 7-9 inches tall. Don’t cut them below the soil, or pull them out with your hands, as they need to regrow next season. You can create “blanched” or white asparagus by mounding soil around shoots as soon as they emerge, preventing sunlight from allowing photsynthesis. They will have a lighter, delicate flavor but no chlorophyll benefits.

While asparagus may be found in stores year-round, it is in season and at its peak in the early spring (Jan-June). Select stalks which are plump, not withered, and a vibrant green (unless you buy the white kind). Make sure the tips are tightly closed. Avoid wide ridges in the stems, dull color, or dried-out looking ends. This indicates old, tough stalks or too long in storage between harvest and shelf.


How to cook asparagus

Asparagus can be eaten raw, and often is alone or with part of an appetizer. There are several methods to cook: gently steam for 10-15 minutes, bake, or pan fry with a bit of oil. Italian dressing makes a fantastic marinade to fry stalks. You could also drizzle on olive oil, seasoning, and bake them in an oven at 400 for 20 minutes. Sprinkle with some fresh Parmesan cheese to really make them sing. Try it in Vegetarian Stuffed Peppers, as a topping baked on a pizza, or in a Breakfast Strata.

Boiling is the least favorable option, only because it pulls some of the beneficial minerals and vitamins out and you lose those in the cooking water. But you will still get a lot of the nutrients as well as the fiber. However you cook your asparagus, enjoy it now while it’s at its peak!