Ahhh, the humble potato. This starchy, much-maligned root vegetable that is a darling and then an outcast, depending on which way the media winds blow. The reason Ireland didn’t completely starve to death. The bearer of cream cheese, chives, and chili.

Origins of the Potato

The potato is the world’s fourth largest food crop, following rice, wheat, and maize. There are many many different types, or cultivars, or potatoes, from blue to red to yellow to the hardy workhorse russet.

The Inca Indians in Peru were the first to cultivate potatoes around 8,000 BC to 5,000 B.C. Then in 1536 Spanish Conquistadors conquered Peru, discovered the wonderous flavors of the potato, and carried them to Europe.  Before the end of the sixteenth century, families of  sailors began to cultivate potatoes along the  coast of northern Spain.  Sir Walter Raleigh introduced potatoes to Ireland in 1589 near Cork.

Eventually, Europeans found potatoes easier to grow and cultivate than other staple crops, such as wheat and oats. Most importantly, it became known that potatoes contained most of the vitamins needed for sustenance, and each acre of land cultivated could provide a year’s worth for nearly 10 people. Talk about an agricultural feat!

In the 1840s a major outbreak of potato blight swept through Europe, wiping out the potato crop in many countries. The Irish working class lived largely on potatoes, so when the blight reached Ireland, their main staple food disappeared. This famine left many poverty-stricken families with no choice but to struggle to survive, starve, or emigrate out of Ireland. Over the course of the multi-year famine, almost one million people in Ireland and Europe died from starvation or disease. Another one million people left Ireland, mostly for Canada and the United States. 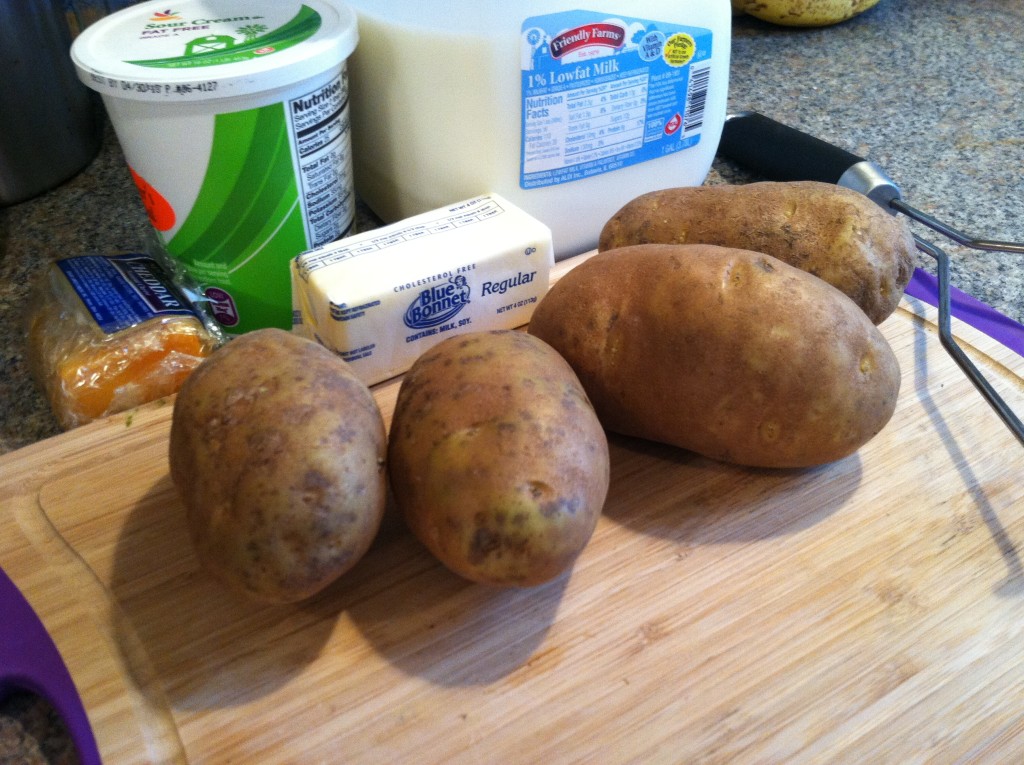 Potatoes arrived in the Colonies in 1621 when the Governor of Bermuda sent two large chests containing potatoes and other vegetables to Governor Francis Wyatt of Virginia at Jamestown.  The first permanent potato patches in North America were established in 1719 in New Hampshire.  From there, the crop spread across the country.

Idaho, the present-day largest producer of potatoes, did not begin growing potatoes until 1836, when missionaries moved west in an effort to teach the native tribes to grow crops instead of relying upon hunting and gathering methods.  However, it wasn’t until 1872 when the Russet Burbank variety was developed, that the Idaho potato industry began to flourish.

The original Russet Burbank potato clone was discovered in the 1870s by Luther Burbank and was called “Burbank’s Seedling”. It developed from a first generation seedling of an open-pollinated cultivar “Early Rose” in Massachusetts. In the late 1800s, he marketed this special seedling to Western states, under the name “Burbank”. The Russet Burbank potato became and still is the major cultivar grown in the USA, especially in the Pacific Northwest. – Read more here.

French Fries were introduced to the U.S. when Thomas Jefferson served them in the White House during his Presidency of 1801-1809.  Collinet, chef for French King Louis Phillipe unintentionally created soufflés (or puffed) potatoes by plunging already fried potatoes into extremely hot oil to reheat them when the King arrived late for dinner one night. To the chef’s surprise and the king’s delight, the potatoes puffed up like little balloons.

In 1853 railroad magnate Commodore Cornelius Vanderbilt complained that his potatoes were cut too thick and sent them back to the kitchen at a fashionable resort in Saratoga Springs, NY. To spite his haughty guest, Chef George Crum sliced some potatoes paper thin, fried them in hot oil, salted and served them. To everyone’s surprise, Vanderbilt loved his “Saratoga Crunch Chips,” and potato chips have been popular ever since.

The good historians at “potatogoodness.com” supplies this list of fun facts about the humble, yet oh-so-popular spud.

The Incas had many uses for potatoes other than dinner: 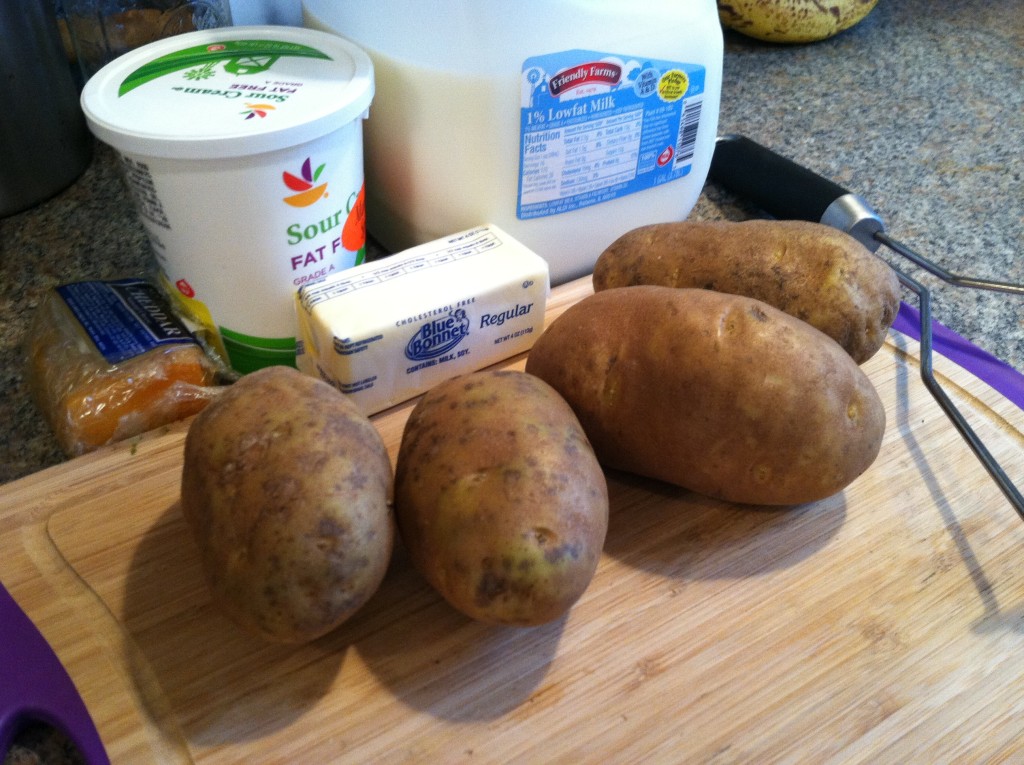 Step 1: If you really want to, peel your potatoes. I just give them a good rinse, because the skin is where the gorgeous vitamins are most concentrated. Dice the potatoes, and boil them for 15-20 minutes. Drain and put back into the pan. 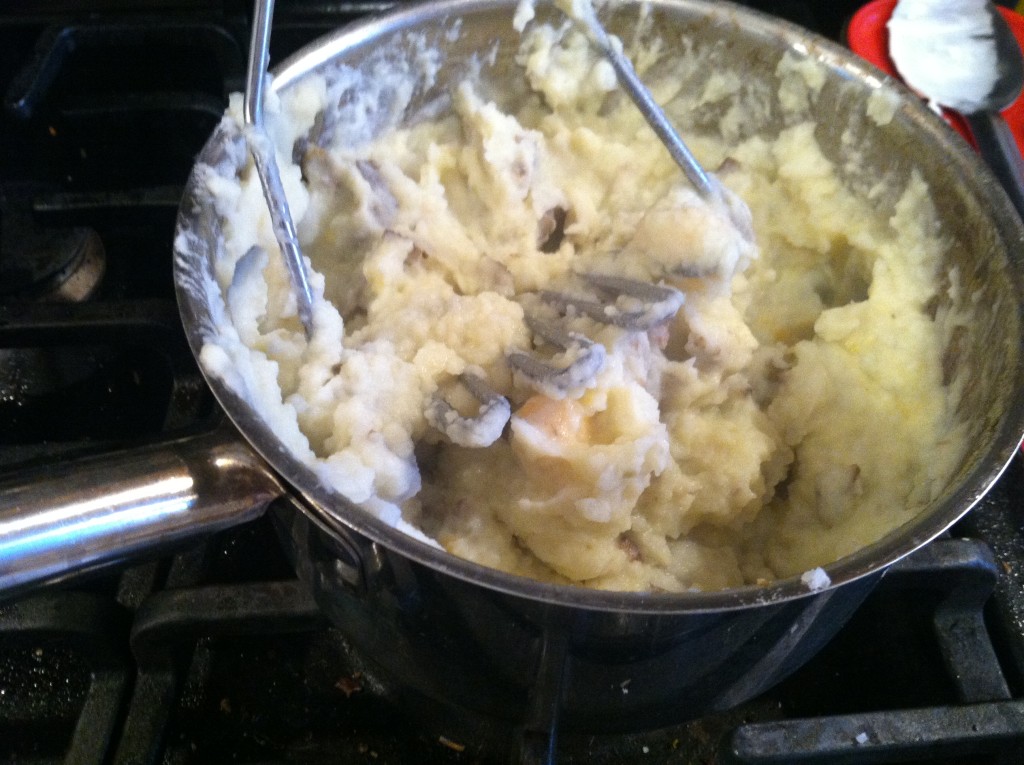 Step 2: Using a fancy potato masher (or a simple spoon, fork, your hands, a wooden spoon…) mash up the potatoes. This part will take a little elbow grease, but think of how toned your bicep (at least, one of them) will be afterwards!

Step 3: Add in the butter while the potatoes are still hot. Continue mashing, and add in the sour cream and milk. If you like your potatoes super runny, add more milk. If you like them thicker, use less. Mash until your desired consistency (I love just a little bit of chunks still left). 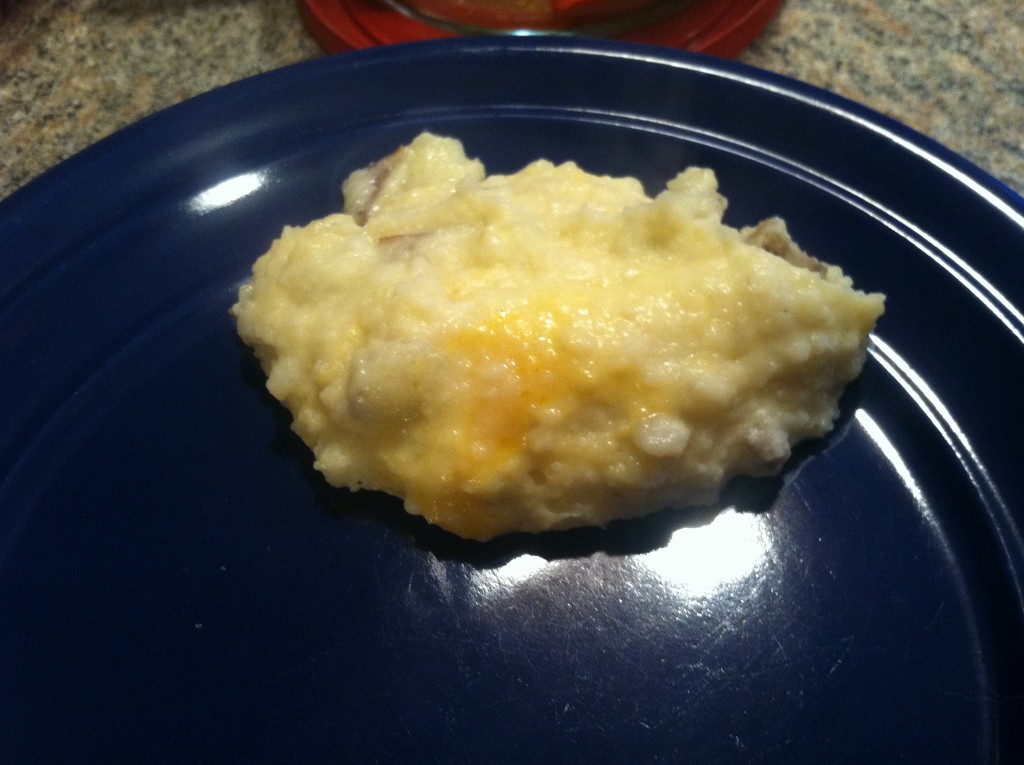 Step 4: If using, sprinkle on some sharp cheddar cheese, and add garlic salt to taste. (Add some, mix it well, taste a little spoonful. Then add another 6 tablespoons, stir again, and taste…repeat as necessary)

Your potatoes are ready to roll! Top with some fresh chives or herbs, more garlic salt, chili, gravy, sauce, whatever…

These are an amazing, down-home side dish. Goes great with meatballs, meatloaf, ribs, steak… pretty much any meat thing. If you make a whole lot extra, you can use the leftovers to top shepherd’s pie, or use it as a filling in classic potato pierogi.