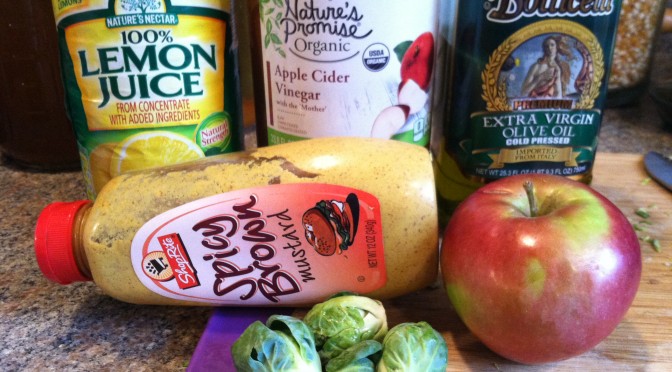 Ahhh the tiny but mighty Brussels sprout.  The divider of nations.  The cruciferous ruiner of relationships.  You get the idea.

Brussels sprouts tend to be a very polarizing vegetable.  For as many veggie lovers that swear by the carmelized candy that is roasted sprouts, there are another 1-2 sad souls who have been turned off by less-than-ideal preparations of boiled, rubbery, or wilty sprouts and swear off these delicate nutrition-packed powerhouses.

Brussels sprouts grow on stalks up to three feet tall, and each bud resembles a miniature cabbage, with a diameter of 1/2 -2 inches.  Typically sold in grocery stores removed from the stalk, they can be found in farmers markets and some specialty stores still attached.  They also are offered canned or frozen, though I cannot vouch for their nutrient content or flavor in such preparations. 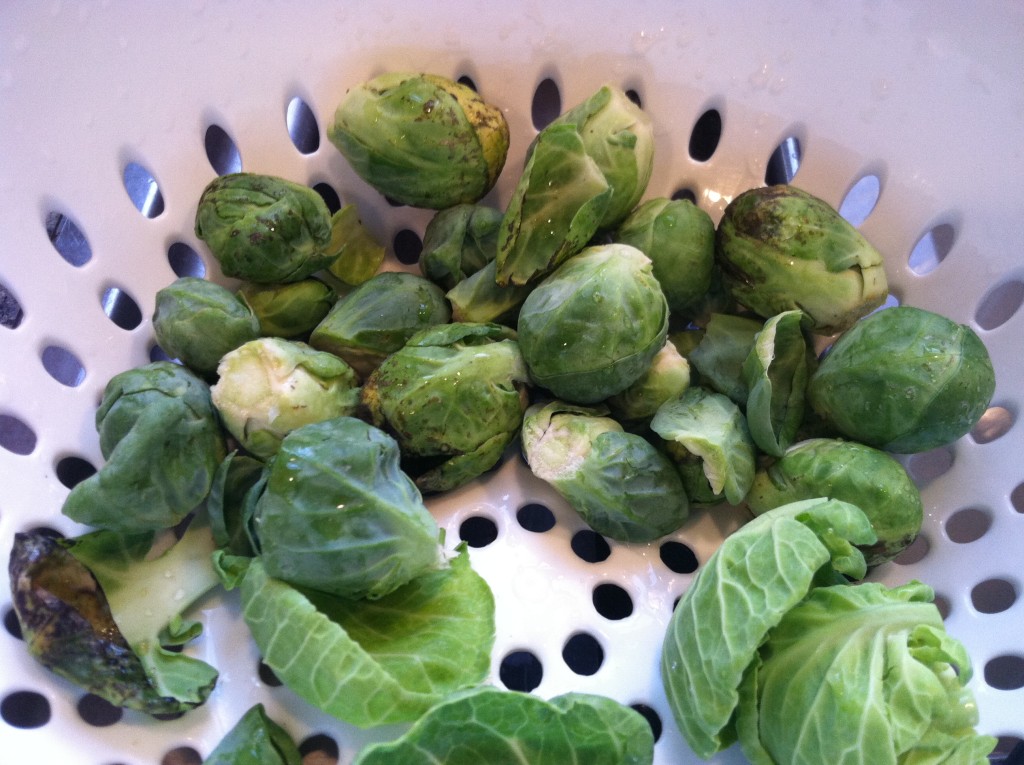 Brussels sprouts are members of the family which includes broccoli, cauliflower, and cabbage, known as Brassicas.  These vegetables are lauded in nutrition circles for their hefty doses of vitamins A, C, and K, folate, and anti-inflammatory and potentially cancer-preventing compounds. 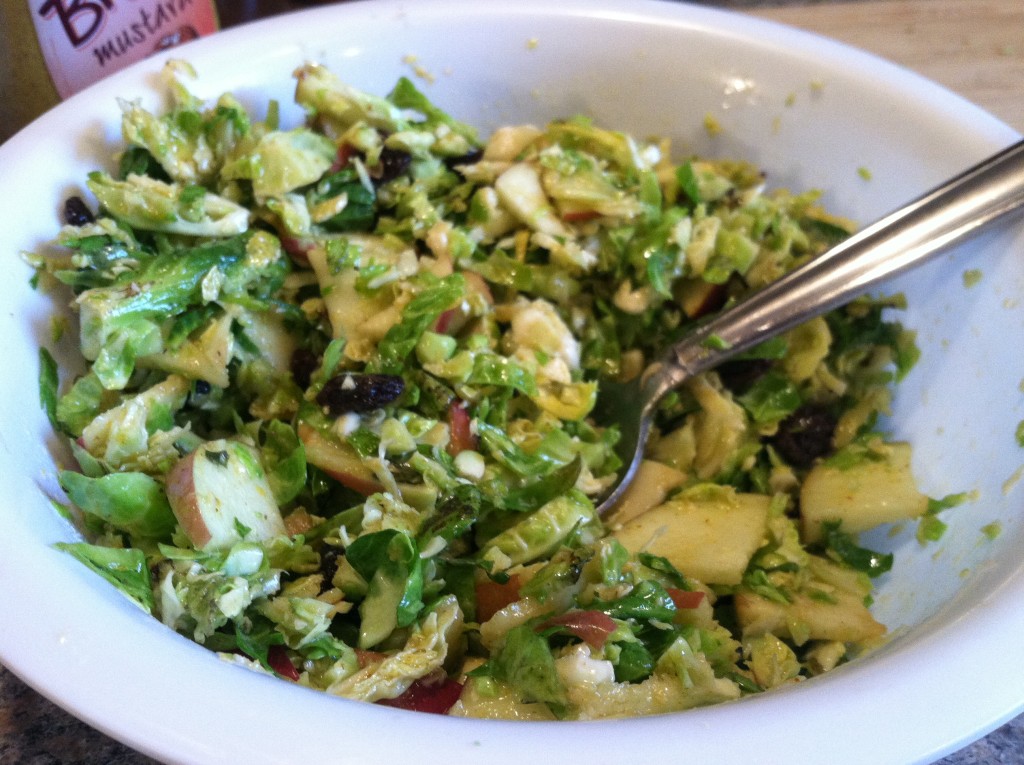 For those who are wary of Brussels sprouts, from past experience or a lack of experience, try this salad to introduce them.  Finely shaved sprouts are mixed with naturally sweet fruit (apples and raisins) and coated in a mixture of sweet and tangy dressing to produce a side salad, or even main dish, of healthy intent sneakily hiding under the guise of almost-dessert.  Everyone can feel good about eating this.  Try it at your next picnic, potluck, as a Thanksgiving or Christmas side dish, or just because it’s Tuesday night. 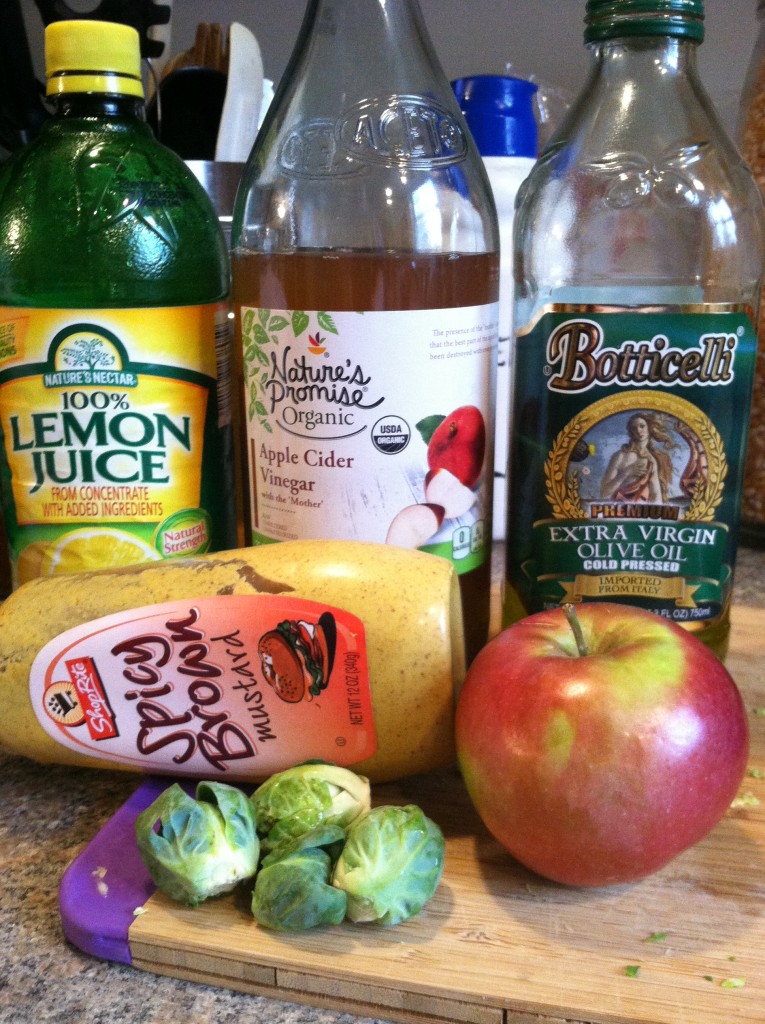 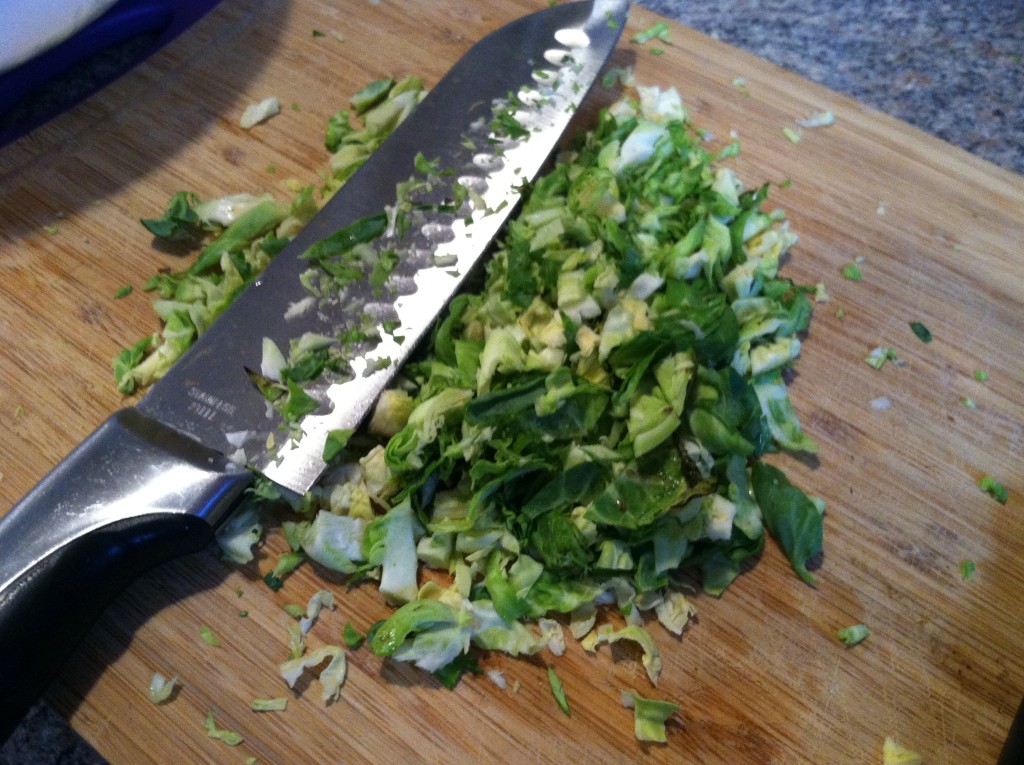 Step 1: Rinse your sprouts, and either use a shredder or a sharp knife to finely dice them, and put in a large bowl. 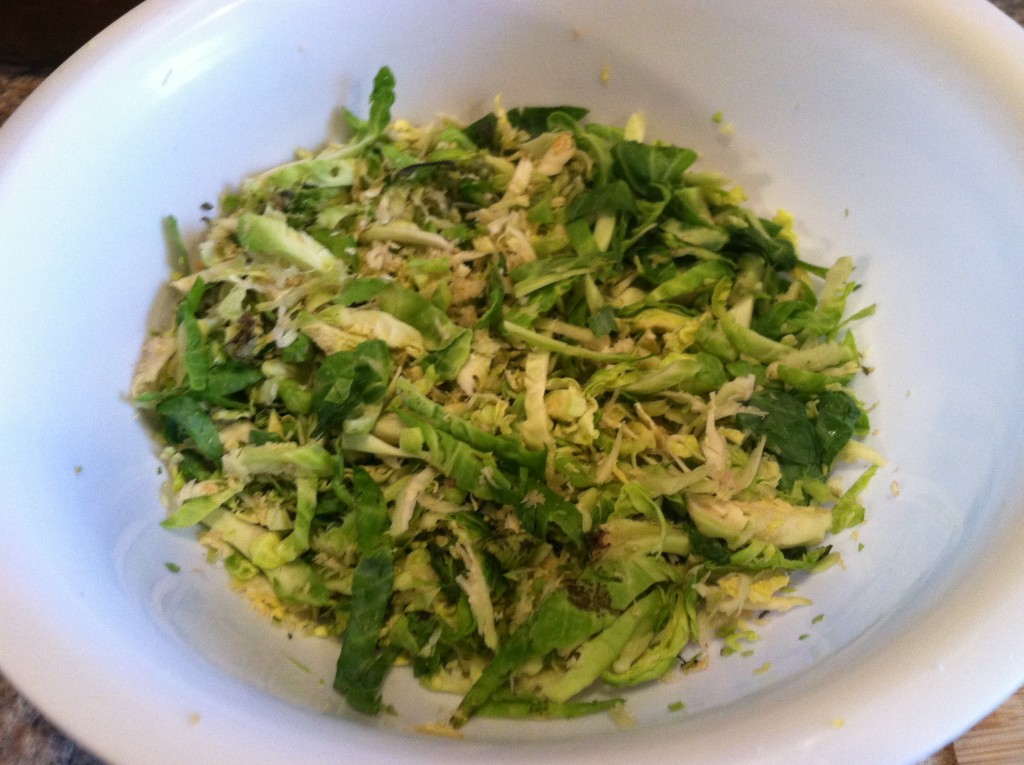 Step 2: In a separate bowl, mix the lemon juice, honey, mustard, vinegar and olive oil.  Use as high quality an oil as you are able. 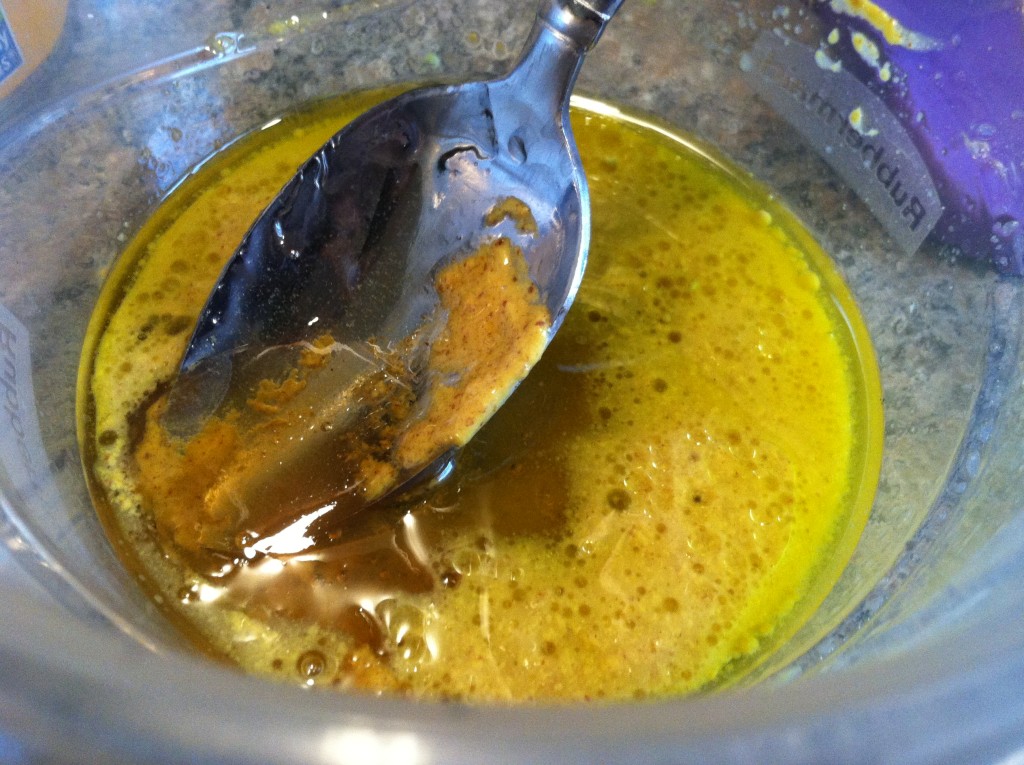 Step 3: Very finely dice and slice the apple.  The best & quickest way is to rinse the apple, then slice into fourths.  Cut out the middle core & seeds and discard.  Then lay each quarter on a side, and thinly slice.  Slice each of those in half and you should have very thin, bite-sized slivers of apple. 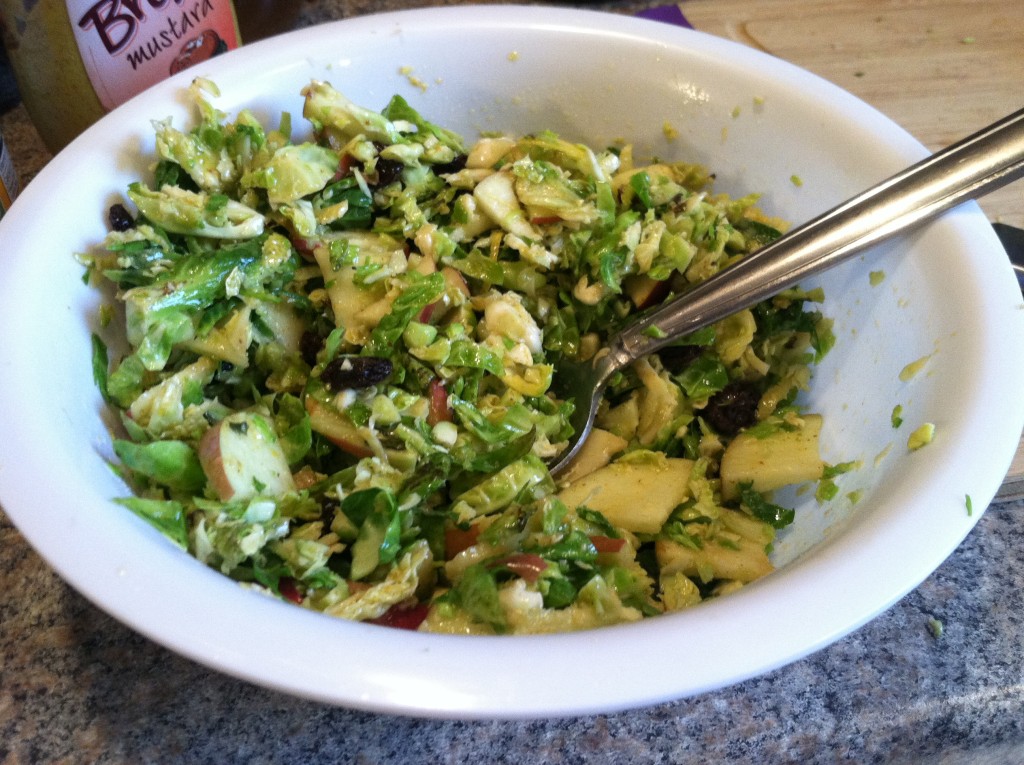 Step 4: Mix the shredded sprouts, apple slivers, and raisins in a bowl.  Pour on the liquid dressing mixture, and toss well to coat.  You can serve hot, cold, or room temperature.  You can serve immediately, or let it sit in the refrigerator up to three days for the flavors to mix.