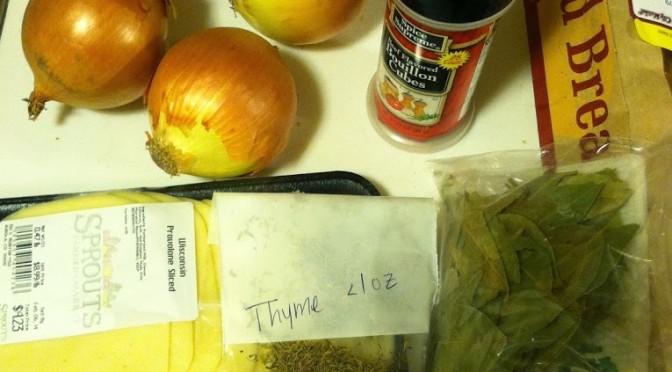 Soups have been around since fire was invented and we figured out water could be boiled. It is no surprise, since there are endless combinations and variations, and soup is the simplest method of cooking a filling, healthy meal in one pot. Onions have also long been a cooking staple: they grow well in most soils, they are easy to store long-term, they are cheap and filling and versatile. It was only a matter of time before onions in soup became popular, at least as early as the Roman Empire. The most popular version is a meat-broth-based soup with carmelized onions, most often topped with some sort of bread and melted cheese. It is rumored that the version of French Onion Soup as we know it was invented in the 18th century by King Louis VX of France. Hence the name “French” Onion Soup.

The most commonly accepted version involves carmelizing the onions in butter by cooking them for a long time to make them soft, translucent, and sweet. Then a broth is added, most often beef broth. A crusty bread, or ‘crouton’ is placed on top, and covered in cheese, most often gruyére. The soup is then gratineéd, meaning it is baked in a ramekin, then served immediately. However there are of course infinite variations, some add brandy or sherry or wine, some recipes use plain water rather than broth, the type of onion and amount may differ, you could use a Crock Pot all day rather than boiling on the stove, any type of bread or cheese may be used, or bread and/or cheese could be omitted entirely. This version is what I had handy and the flavors that I most wanted.

Legend has it that the first French Onion Soup was created by King Louis the XV of France when all that could be found in the pantry of his hunting party’s lodge was butter, onions and champagne.  It is said that he combined these ingredients to create the first French Onion Soup.  It is unclear if this story is myth of fact, but it is a good story none the less!
Onions have been a popular staple in preparing meals from at least as far back as the Roman Times.  Onions are easily grown in most soils they are cheap abundantly available and have a long shelf-life.  For this reason onions were seen as The Poor Man’s food.
The modern version of the soup has evolved from a basic recipe where onions were sliced, fried and then cooked in water and would typically be served with bread and capers.  It was only in the nineteenth century that cooks started adding flour, salt and pepper and topped the soup with cheeses such as Gruyere.
Today French Onion Soup Recipes is often made with caramelized onion in a meaty broth.  This is often served in individual ramekins and topped with grilled Gruyere cheese.  Try Chef Billy’s take on this time-honored dish – ideal for keeping the chills at bay on those cold winter nights!
– See more at: http://kitchen.net/blog/the-story-of-french-onion-soup/#sthash.4qSbyr89.dpuf 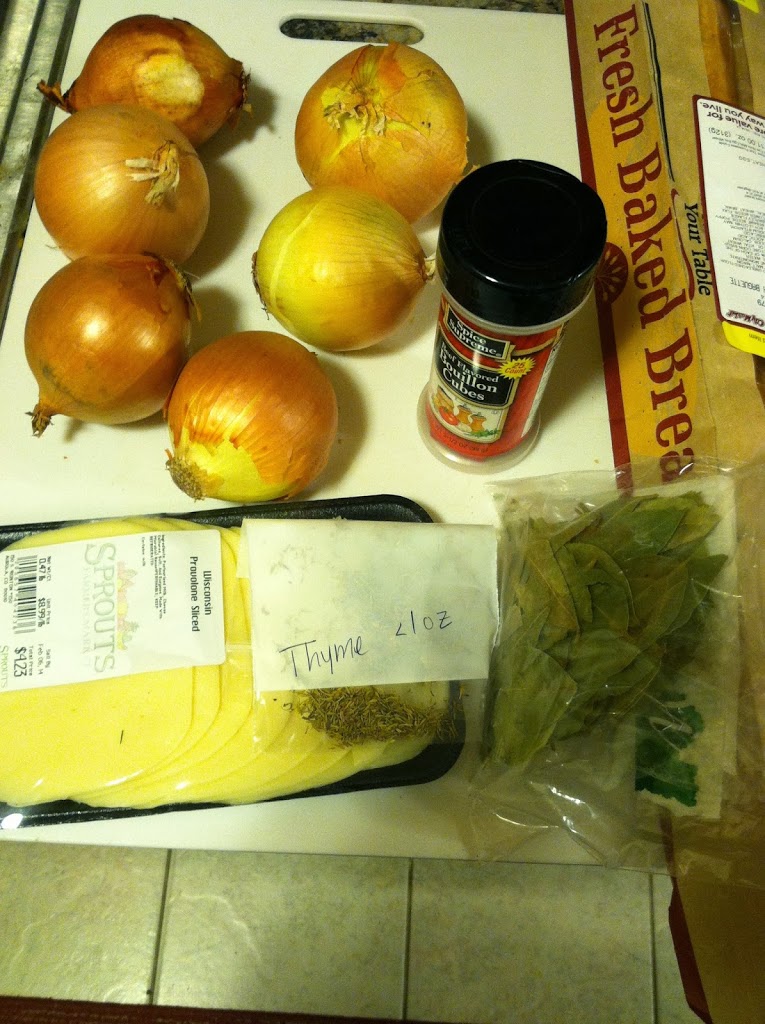 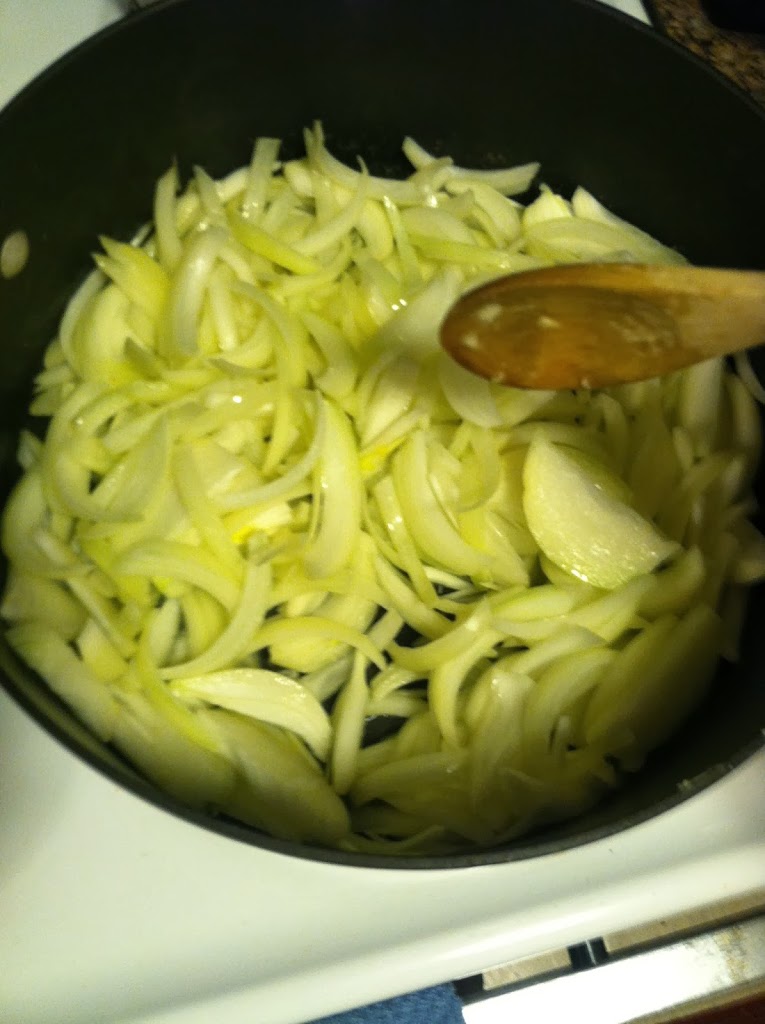 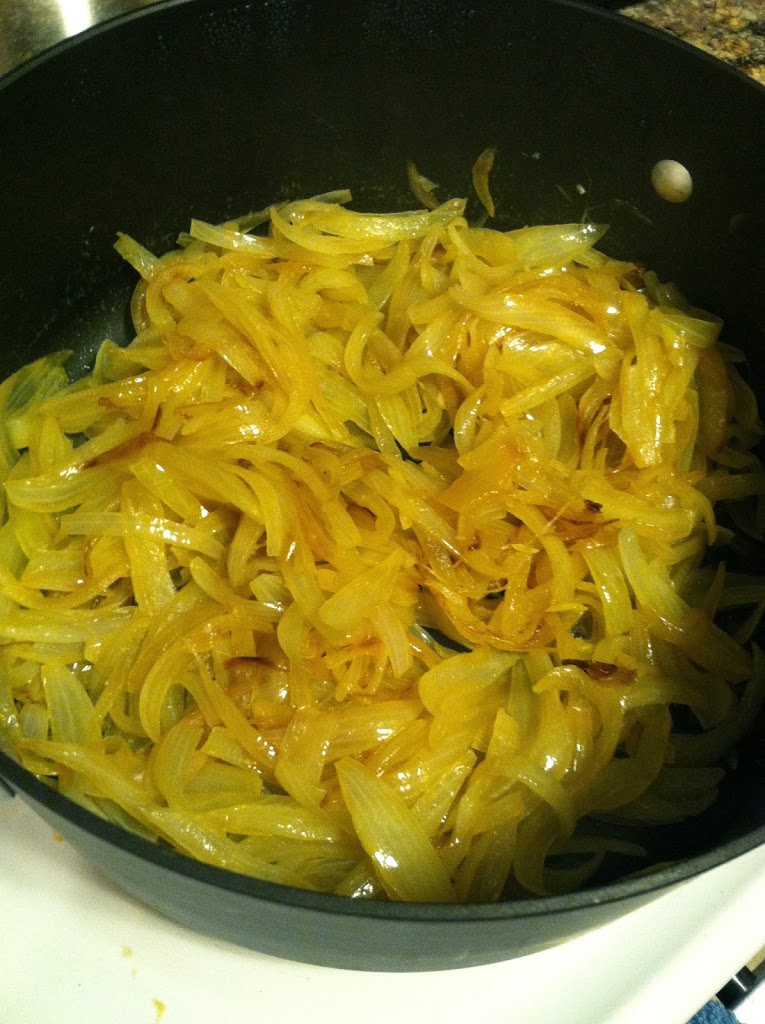 Step 2: Add the water broth, bay leaves, sauce, sugar, and other seasonings. Bring to a boil, then simmer for 1-2 hours. 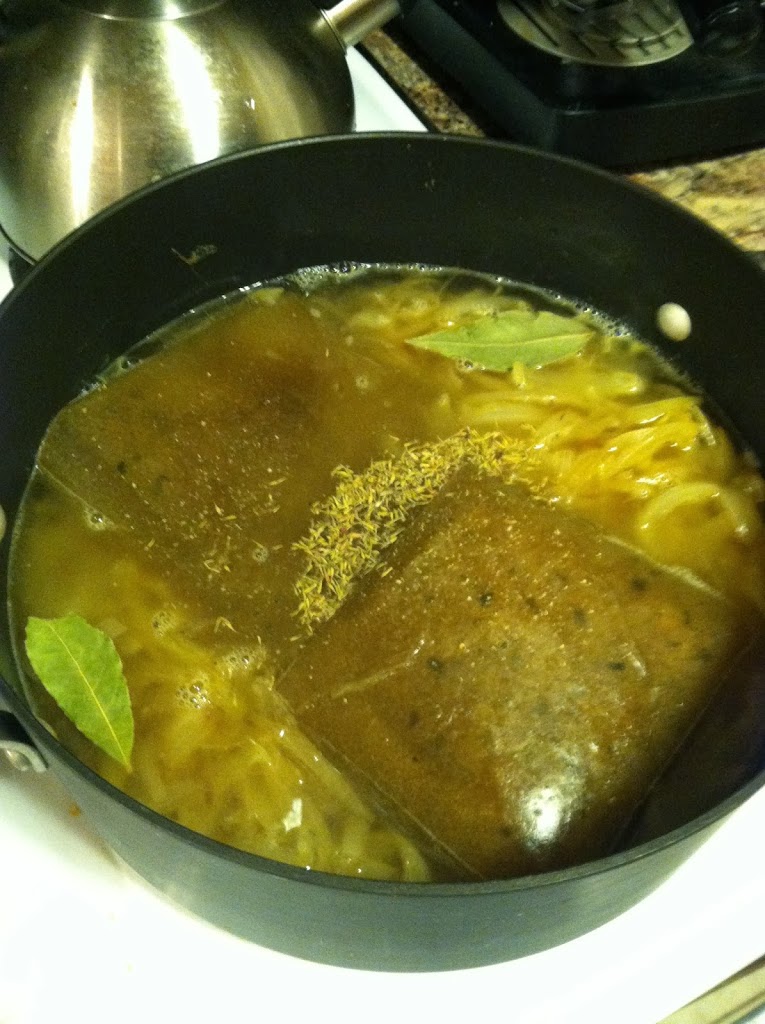 This smells fantastic. At this point if you wanted to add some white or red wine, sherry, or brandy you could. You could also simmer for pretty much all day if you want the flavors to melt together more. 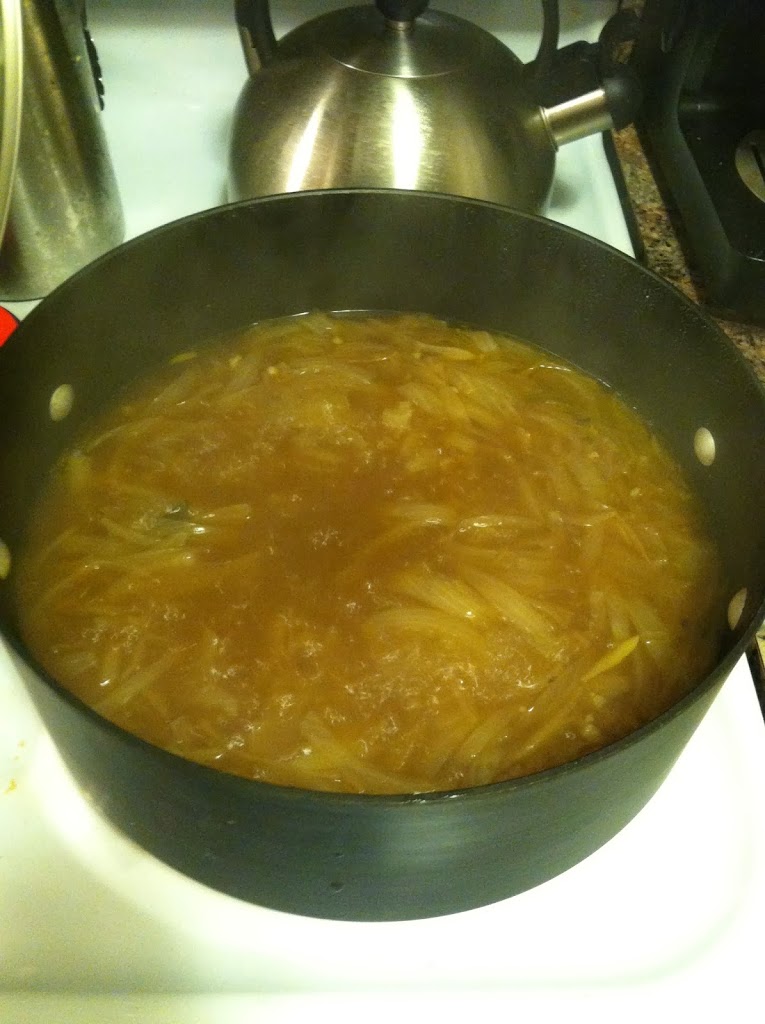 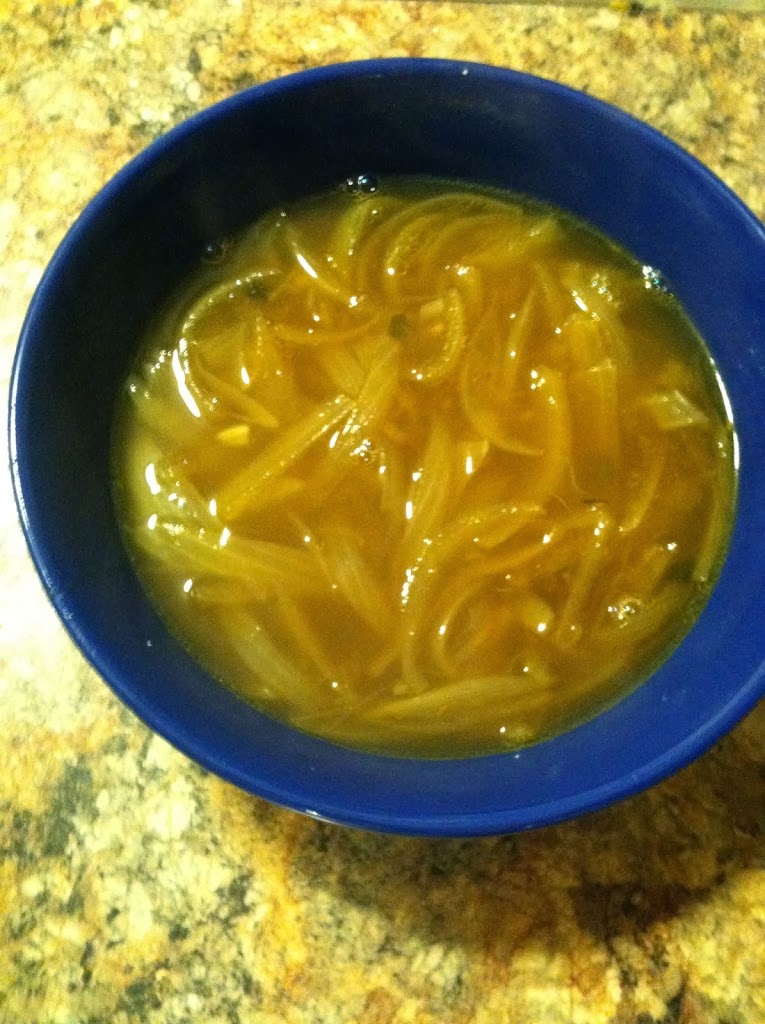 Step 3: Put a slice (or 2 or 3) of crusty bread on top, and cover with cheese. If you have oven-safe ramekins, you can bake at 350 for 10-15 minutes, until cheese is brown and bubbly. I didn’t trust these bowls in the oven, so I just microwaved 30 seconds to get the melty-cheese effect. 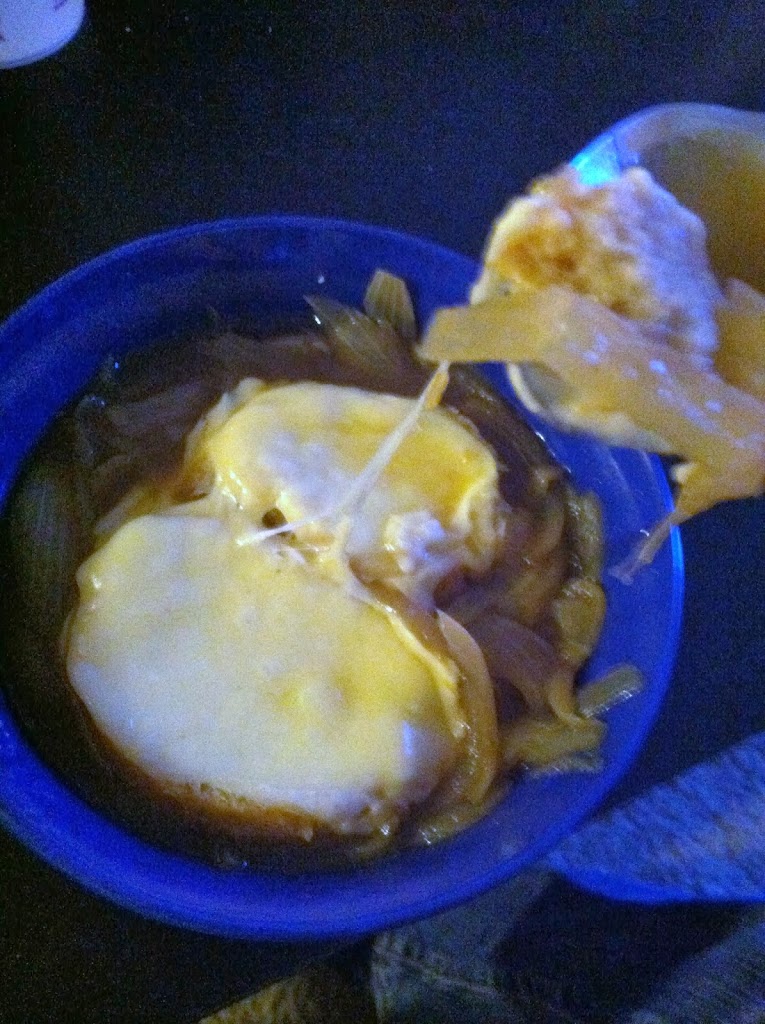 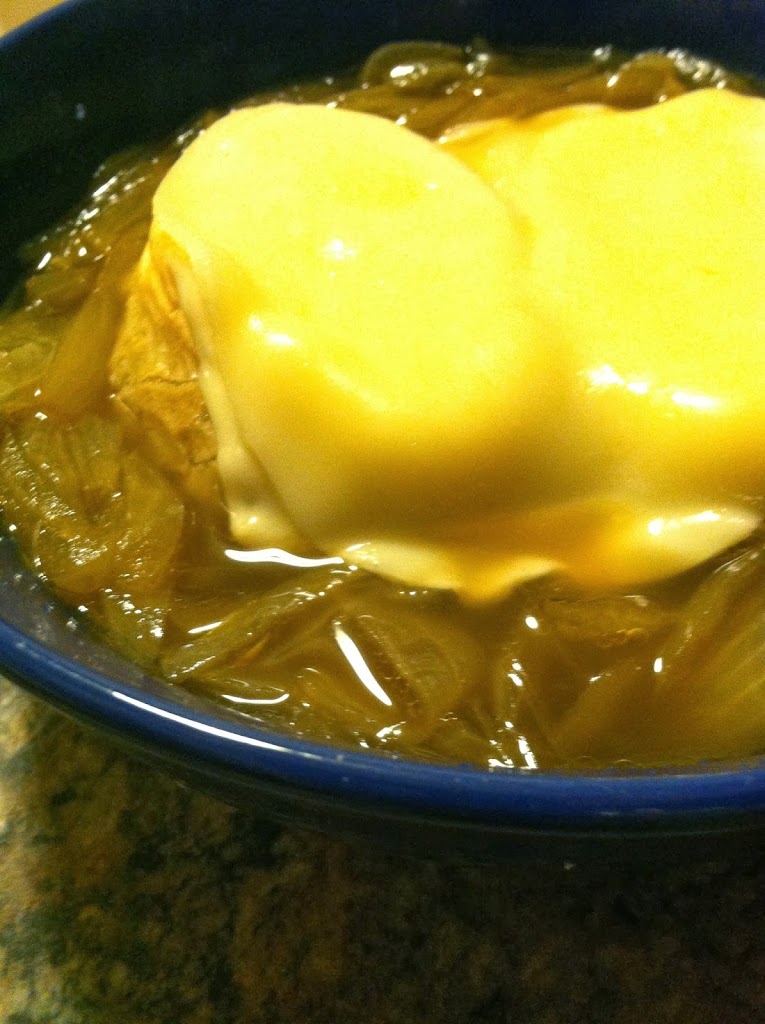 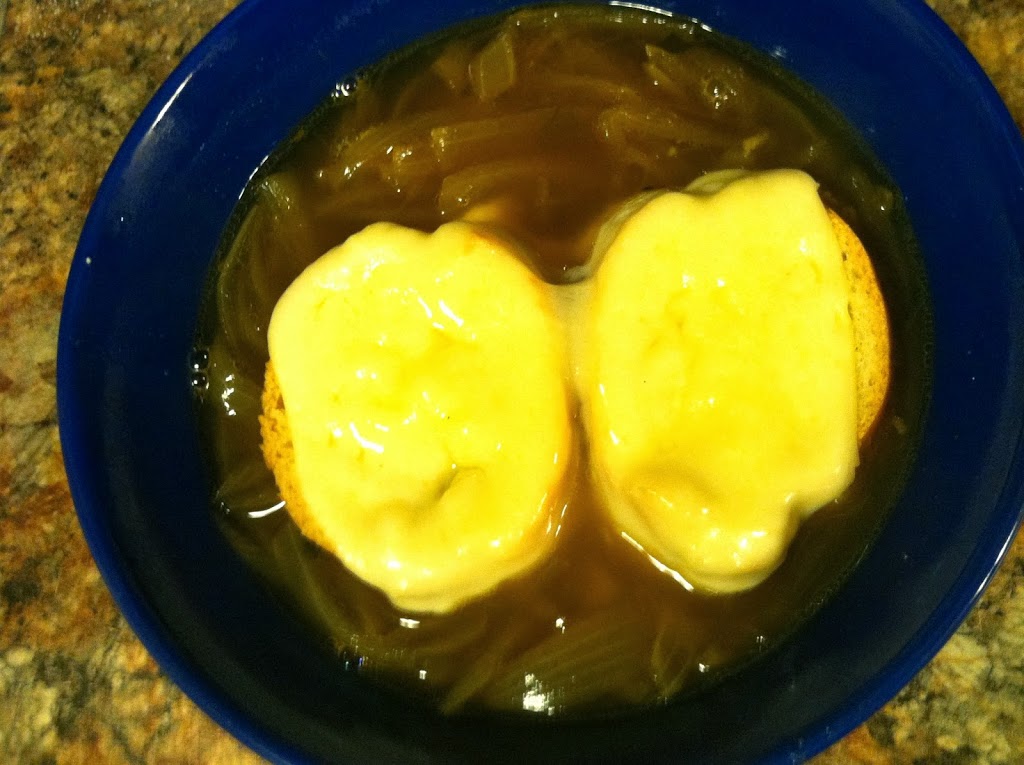 This soup is complex, warm, and delicious, perfect on a cold night. Depending on what you want to add and how long you let it simmer, a hot, impressive dinner could be on the table within an hour.

Don’t forget to check out my ecookbook, 7 Souper Soups, and get your free copy! The next edition will have to include this recipe…