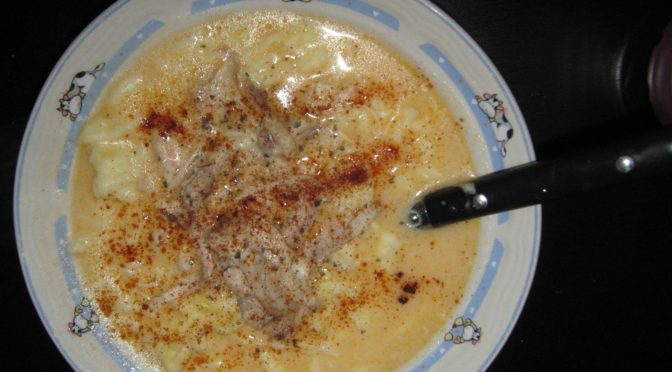 This is in my top 5 favorite meals of all time!

A Hungarian (or maybe Slovak?) recipe handed down from my grandmother and mother. It is simple to make, just a few ingredients. It does take a bit of time and some labor-intensive steps, however the end product is so worth it! 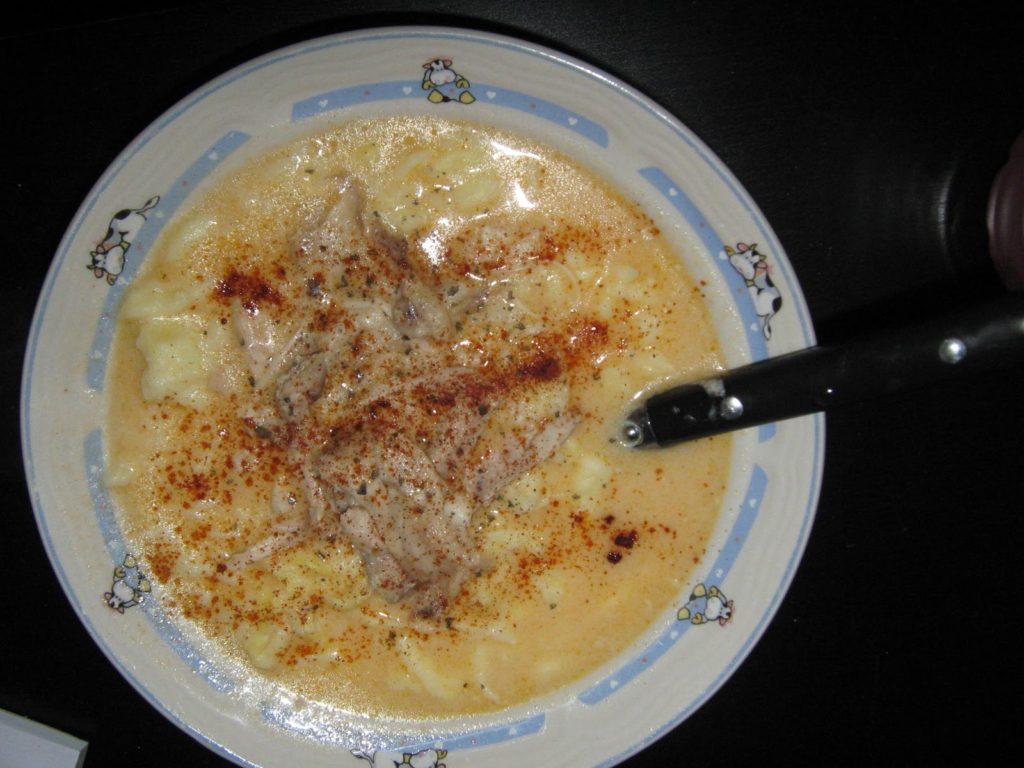 The noodles can of course be bought, but making your own noodles is well worth the effort. They taste so much better than any store bought noodles ever could.

For this I used 4 chicken leg quarters, because dark meat gives the soup a richer flavor. You can use white, dark, or a mixture of both. Put the chicken in a pot and cover it with water plus a little bit extra. Maybe a gallon and a half of water.
.
Boil for at least 2 hours or until chicken is no longer pink at all. Take the chicken out and pull all the meat off the bone. Throw the bones, skin, fat, and any other non-edible parts away and return the meat to the pot. I did this step the night before and refrigerated it until the next day but you can also just continue right into the next step.
.
The second step is creating what I think is called a “zapraska”. 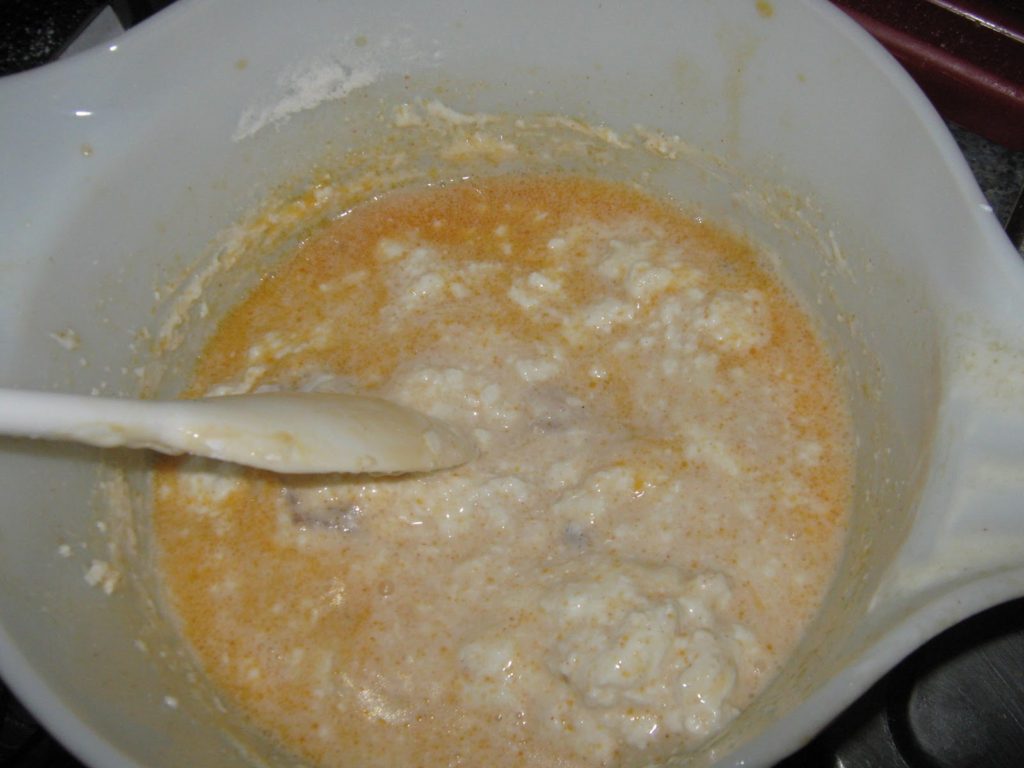 This is how you mix in the sour cream without it curdling. The sour cream should be left out at room temperature. Mix about 1 cup sour cream with 2 tbsp. flour (omit the flour if you want watery soup) in a separate bowl. Then slowly add soup to it while mixing continuously.
.
The soup will slowly warm up the sour cream. Continue adding and mixing well until it is warm. Then you add the zapraska to the main soup bowl and mix it all together. Add paprika, salt and pepper to taste. 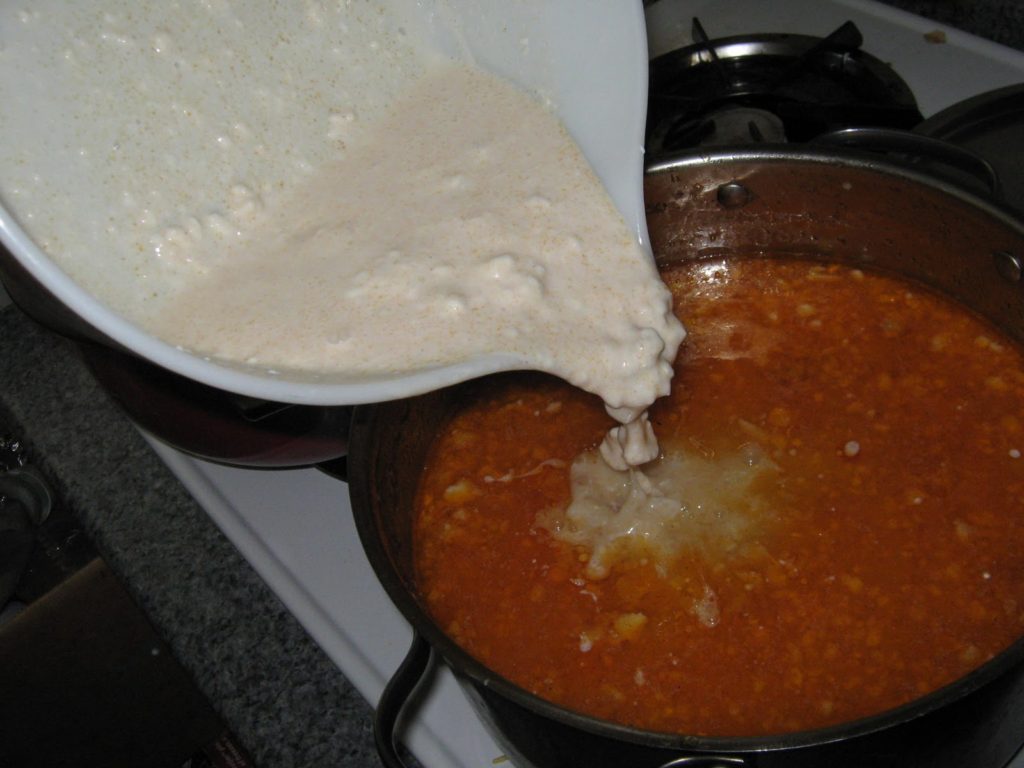 And now for the fun part! You get to make your own noodles. Trust me, it is super duper easy. Honestly, cleaning up afterwards probably takes longer than making them.
Noodles:
The ratio will depend on how many noodles you need to make. I only needed a small amount, so I used 6 eggs and approximately 1 cup of flour.  You will also need a noodle maker, we call it a “shusher’. I don’t know what it actually is called. If you don’t have one of those, you can always drop the dough with a spoon into the water; this will create larger dumpling like noodles.
Scramble the eggs in a large bowl. Mix the eggs and flour together a little bit at a time. Keep adding flour until it has a doughy consistency. A spoon left in it should basically be able to stand upright.

Get a big pot of water to a rolling boil. Then pour the dough into the top basket of the shusher. Push it back and forth so the dough drips through into the boiling water. 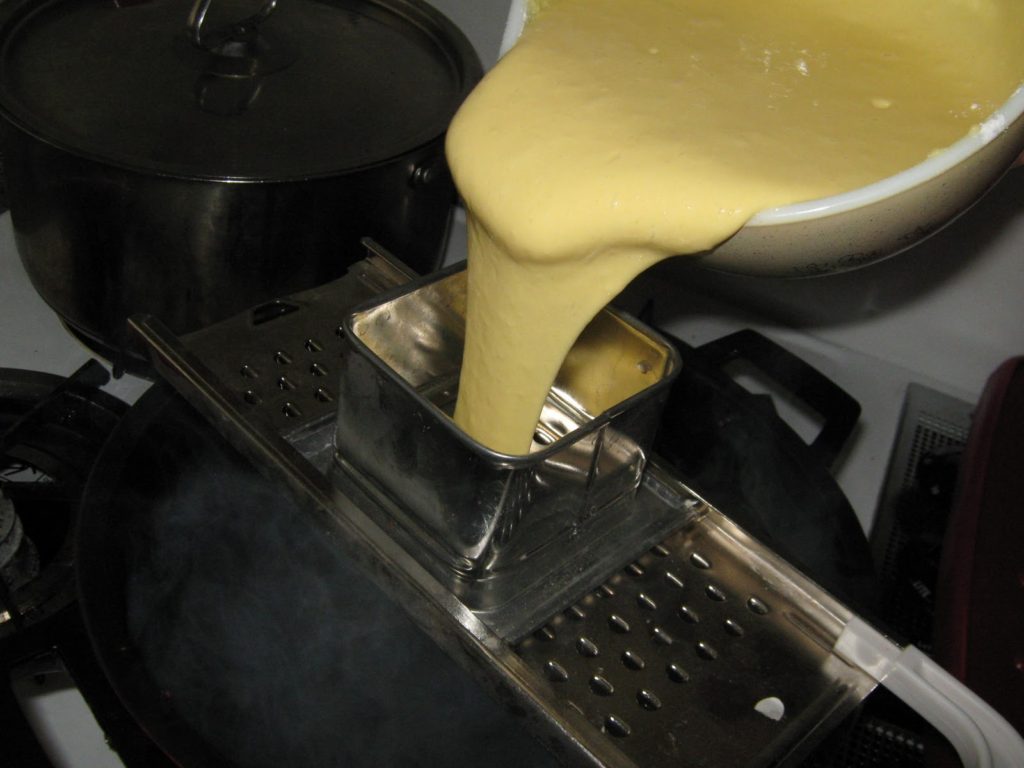 Make sure to stir a few times throughout so that the noodles don’t all stick together. Keep going until all the batter is used up. Drain the noodles completely.
These will be the sweetest, saltiest, most eggy and delicious noodles you may ever have had! Put some into a bowl, and pour the soup and chicken on top. You can add some extra paprika or salt to taste.