A vitamin is defined as an organic compound that living organisms need in small amounts. Vitamins are essential for vibrant health, along with minerals and the main cellular building blocks of carbohydrates, proteins, and fats. We only need tiny amounts (usually under 100 milligrams or less, though there are a few exceptions) and as long as you eat a varied diet it should be no problem to get all you need daily.

Vitamins are usually classified by whether they are fat-soluble or water-soluble. Fat soluble vitamins dissolve in lipids, like olive oil or butter. These vitamins are best absorbed when paired with something containing a small amount of fat, however they can also be stored in fat cells and build up to potentially toxic levels. These vitamins include A, E, D, and K. 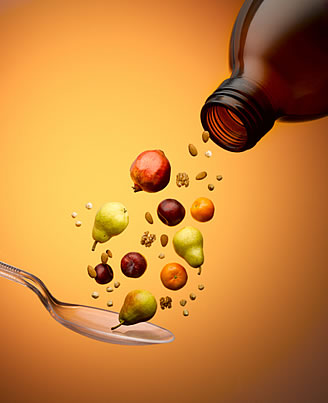 Water soluble vitamins are of course able to be dissolved in water. This makes eliminating excess from the body quite easy. However it also means we cannot store them as we can the fat-soluble kinds, so we need a daily supply.  It is difficult to reach toxic dosages of these vitamins, though it can be done. These include the B vitamins, folic acid, and vitamin C.

How much of each vitamin you need depends on a variety of factors such as gender, age, activity level, pregnancy, and more. There are RDAs (Recomended Daily Allowance) which is the average recommended amount, however you should consult your physician before beginning any new diet or supplement routine.

This post will cover all the vitamins which are not part of the “B complex”, the eight B vitamins you often hear of are B1, B2, B5, B6, B9, and B12. We will cover that in a later post: The B Vitamins.

Here we will discuss Vitamin A, C, D, E, and K. When vitamins were first discovered, Vitamin A was isolated first from butter and was named “factor A”. The next similar substance, isolated from rice, was named “factor B”. Discoveries followed in alphabetical order until “factor K”, which was named for “koagulation”, the German word for coagulation, because it helped blood to clot.

Vitamin A — fat soluble; this vitamin has two forms, retinol and beta-carotene. Retinol is the active form of Vitamin A, while beta-carotene is pro-Vitamin A which your body can activate. This vitamin is necessary for healthy skin and teeth, vision, growth, and a healthy immune system. It can be found as retinol in oily fish, liver, egg yolks & dairy, or as beta-carotene in  yellow, orange, and green fruits and vegetables.

If you don’t get enough vitamin A, you are more likely to get infectious diseases and have vision problems. If you get too much vitamin A, you can become sick. Large doses of vitamin A can also cause birth defects. Vitamin A poisoning usually happens when an adult takes supplements exceeding several hundred thousand IUs (International units). Infants and children may experience poisoning at smaller doses. Beta-carotene cannot make you sick, however excessive amounts may turn the skin yellow or orange in color. When you reduce intake, skin color will return to normal.

RDA for adult males = 900 mcg/day (micrograms) and females = 700 mcg/day, and twice that amount if breast-feeding.

Vitamin C — also known as Ascorbic acid, L-ascorbic acid, or simply ascorbate, is one of the best-known vitamins thanks to very effective marketing of the orange juice companies. It is an extremely important vitamin as it is involved in at least eight different enzymatic processes, helps the body absorb iron, and acts as an antioxidant. For the majority of people, if you ask them how to get the most vitamin C, they will probably say to drink orange juice or eat an orange.

However, the world’s best sources of Vitamin C are likely all things you’ve never heard of, such as the billygoat or Kakadu plum from Australia,  the camucamu tree of the Amazon, the acerola or West Indian cherry which is native to South America but is now grown as far north as Texas in the US, the Indian gooseberry, or the sea buckthorn which is actually a shrub and does not grow under water.

Most fruits contain around or more than the UK RDA of 40 mg for adults, which is good news. Surprisingly, several vegetables rank higher than the majority of fruits, including broccoli, kale, brussels sprouts, and peppers. It is water soluble, and excesses in the blood are rapidly excreted in urine; as such it has a very low toxicity. However, a deficiency leads to the horrific, painful, and thankfully rare disease scurvy.

Vitamin D — vitamin D is actually a group of fat-soluble steroid-like molecules which enhance the absorption of calcium, iron, magnesium, phosphate, and zinc in the intestines. Vitamin D has a significant role in calcium homeostasis and metabolism and can be obtained through the diet or through synthesis in the skin upon exposure to sunlight. Specifically D3, or cholecalciferol, is the form which the dermis synthesizes when hit with UVB rays.

You don’t need much, likely only 15-30 minutes per day, of direct sunlight on your skin to make enough vitamin D. The synthesis is regulated by a negative feedback loop which prevents over-accumulation and toxicity, so you can sunbathe without worry. However, in the winter months or countries near the poles, deficiency becomes more common, leading to sadness, lethargy, and fatigue.

Extreme lack of Vitamin D leads to the bone under-mineralization disease rickets, most commonly seen in children in developing countries. Beyond its use to prevent osteomalacia or rickets, the evidence for other health effects of vitamin D supplementation in the general population is inconsistent.

Vitamin E –– is also a group of compounds which includes both tocopherols and torotrienols. Their most commonly known and perhaps most important function is as an antioxidant, but they also are involved in enzymatic activities, cell signaling, gene regulation, and neurological pathways.

A deficiency of vitamin E leads to many different nerve disorders, such as arrhythmia, muscle disorders, myopathies, and anemia; yet vitamin E at high doses can act as an anticoagulant and lead to excessive bleeding, and universal upper limits for safety are set at 1,000 mg/day. Vitamin E may also counter-act Vitamin K, and in combination with other blood thinners like aspirin, overdose can become lethal.

RDA = varies for children beginning at 6mg/day through 11 mg/day, for adults it is recommended 15 mg/day.

Vitamin K — yet another letter representing more than one molecule, vitamin K refers to a group of structurally similar fat-soluble vitamins required for protein synthesis. K1 is also known as phylloquinone and is made by plants, specifically green leafy vegetables. K2 is the main storage form in animals, and can be made from K1. There are also 3 synthetic forms, K3, K4, and K5.

Vitamin K is important in the process of blood coagulation, binding of calcium in bone. Low levels of vitamin K weaken bones and promote calcification of arteries and other soft tissues. As mentioned above with its interaction with Vitamin E, without vitamin K, blood coagulation is seriously impaired, and uncontrolled bleeding occurs. It is not recommended to take vitamin K along with anticoagulants such as warfarin.

While vitamins are necessary for health, and you may feel you are not getting enough of one or another, it is always best to obtain our vitamins from diet rather than individual supplements. This is because vitamins exist in food in concert with hundreds, or even thousands of other trace compounds and in multiple active and inactive forms. 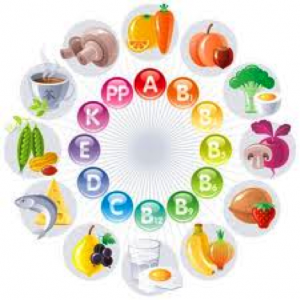 What is put into a pill may not be the exact conformation your body needs. Or it may be at too high a concentration. Perhaps it is lacking a key partner or two which makes it function at its best. This is why you should aim to eat a colorful, varied diet every day. Always consult your doctor or licensed health care professional before beginning a dietary supplement, changing dosage or frequency, or stopping a supplement.

If you are lacking a particular vitamin one day, you may eat a bell pepper the next and make up for it. Just try to do something active each and every day, and fuel your body with plenty of fresh, whole, plant-based foods with minimal processing and you should live a full, long, thriving life.

2 thoughts on “What are Vitamins?”