As I was browsing some old cooking magazines one slow day at work, I came across a recipe for wedding soup that sounded absolutely wonderful. Seeing as I had most of the ingredients (though the list is super short anyways) I decided to try it out. Here is my version of it. 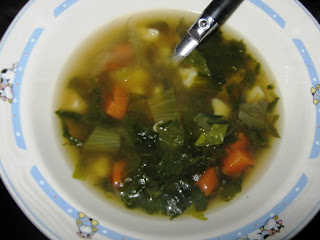 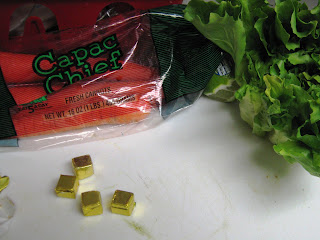 Here’s the ingredients laid out on a cutting board.
. 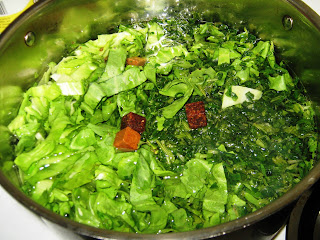 Step 1: Put a half pot of water on to boil and open up the bouillon cubes and drop them in.
Step 2: Cut the end off the head of escarole and chop into thin strips, maybe 1/2 inch. No real science to it. I diced up the carrots into small pieces, put that in, and added the spinach and the escarole to the pot. I opened the chicken and added in about 1 tbsp black pepper.
.
Step 3: Put that on medium-high and let it come to a boil. Then put it on to simmer while I made the noodles. (Yes, I made up for frozen meatballs by making my own noodles!)
.
To make the noodles, I mixed about 1 cup flour and 2 eggs in a bowl until dough-like. I then pinched off tablespoon-sized balls of dough one at a time and rolled them with my hands into logs. Then I sliced those into tiny dumplings and boiled them for about 5 minutes.
.
Seriously, making your own noodles tastes a million times better than the store! Although it is quite a bit of work. I got maybe a pound out of 2 hours’ work. The final step is to add the meatballs, put it all together in a bowl and enjoy! It is super healthy (besides the probably astronomical sodium…) and pretty cheap overall to make quite a bit. You should definitely sprinkle some Parmesan cheese on top! Next time though, I will add 2 or 3 times as much chicken, because 1 can into a gallon or so of soup gets lost easily.