Since I have no oven in my current apartment, I have been looking for new and creative recipes to try in the slow cooker. I found one for enchiladas on Allrecipes.com and decided to use that as the basis for dinner tonight. Of course, I am terrible about measurements, so maybe you’ll want to look up their recipe if you want exact amounts.
Ingredients:
~1.5 lbs ground beef
1/2 cup taco seasoning
1/4 cup water
1 can cream of chicken
1 cup salsa
handful of fresh cilantro (because it was on sale 0.74 a bunch!)
Corn tortillas
Shredded cheese
Step 1: Brown the ground beef in a skillet. Drain off as much of the grease as you can. Add the taco seasoning and water, and cook the seasoning into the beef until most is absorbed. This is the second layer over the tortillas. 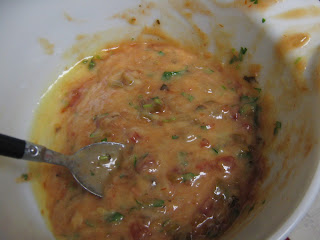 Step 2: Mix the chicken soup, salsa and diced cilantro in a bowl. This will be your third layer. 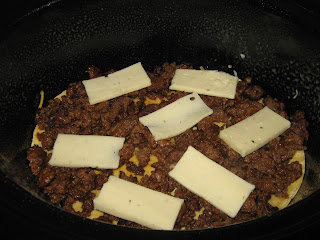 Step 3: Spray the inside of the crock pot so hopefully there will be no burnt-on mess later. Put down a layer or 2 of tortillas. Then a layer of meat. Then the cheese mixture. Over the topmost layer of beef, I added some slices of pepper jack to give it an extra little kick. 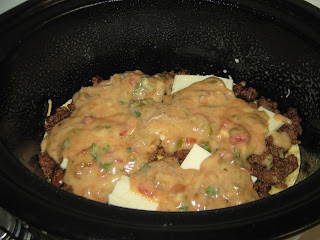 Keep layering until you use all the beef and soup mixture. Put a top layer of tortillas on and sprinkle with more cheese. 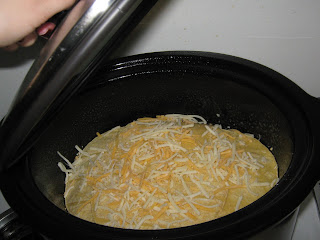