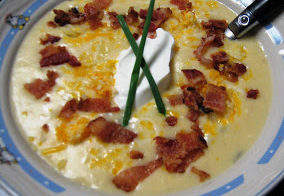 As stated previously, cold weather is made for soups and stews. But you can only throw meat, vegetables, and some kind of stock together so many different ways. Sometimes I need a soup of a different texture.

Given that the days of grilling and baked potatoes are slowly fading, I decided to make the soup adaptation of baked potatoes. It is creamy, cheesy, thick and filling. Not to mention it is relatively cheap to make (especially if you skip adding the bacon, but I wouldn’t recommend it). 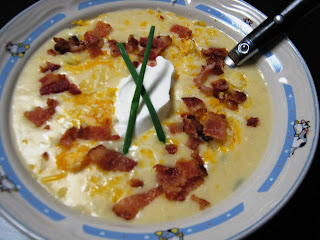 The way I made it, you will make the mashed potato base, and then both thin and thicken it with the broth and dairy and add-ins.

Step 1: Wash and peel the potatoes. Cut the potatoes into quarters and add to 3 cups chicken broth. Either boil for 1 hour, or put on hot in a slow cooker for 4 hours. Then liquefy the cooked potatoes in a blender and put into a soup pot on the stove. Add the cheese and cream cheese and put on low.

Step 2: While the soup simmers, combine the milk, chives, bacon, garlic, onion and the rest of the cream cheese in a blender. Liquefy all of the ingredients, and then add to the soup pot. 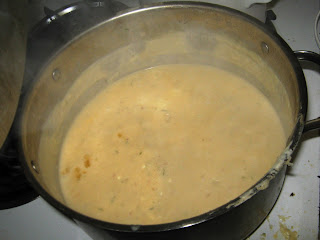 Once the soup simmers and begins to thicken, taste the soup and adjust to your liking. Then if you want to be all fancy, you can serve it with a sprinkle of cheese and bacon, a dollop of sour cream and a piece or two of chives.