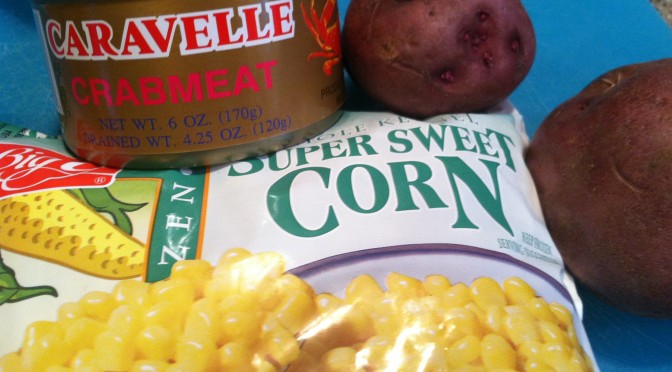 Since I live on the East Coast now, things like clam chowder are a given. But one day when I had a craving for it and called around, I found out it costs about $20 per quart to order from a restaurant. Of course my frugal self was all “say what?” I knew I could make something just as delicious for far less. Then one night the significant other, when asked what he’d like for dinner, said “something like soup, but thicker, to dip bread in”. 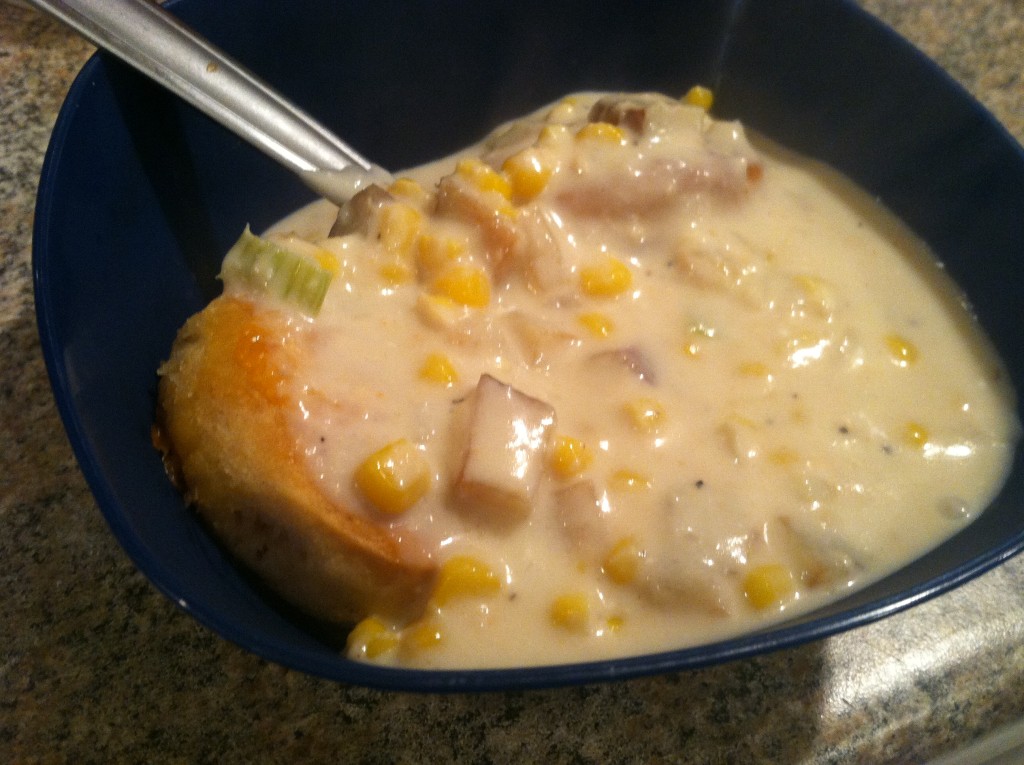 I went to the pantry, and surprise, have not stocked anything with clams in it yet. A quick google search revealed that corn chowder and potato chowder are both popular options throughout the midwest and east coast. I love incorporating extra veggies into just about everything, so that sounded good.

But I still wanted that coastline-eqsue “fishy” taste. Not the “I hate salmon forever because this is gross” taste, just the salty, reminds you of the ocean flavor. Anyways.

To my delight, I did have some canned crab meat on the shelf!

Jackpot. Combined with a teeny bit of fish sauce from my favorite Asian market, that should do the trick. A bit of creative dairy and thickening, and this turned out far superior to anything I’ve had in a restaurant. I was quite pleased, and it definitely satisfied the ‘soup-like but thicker’ and dipability requirements. 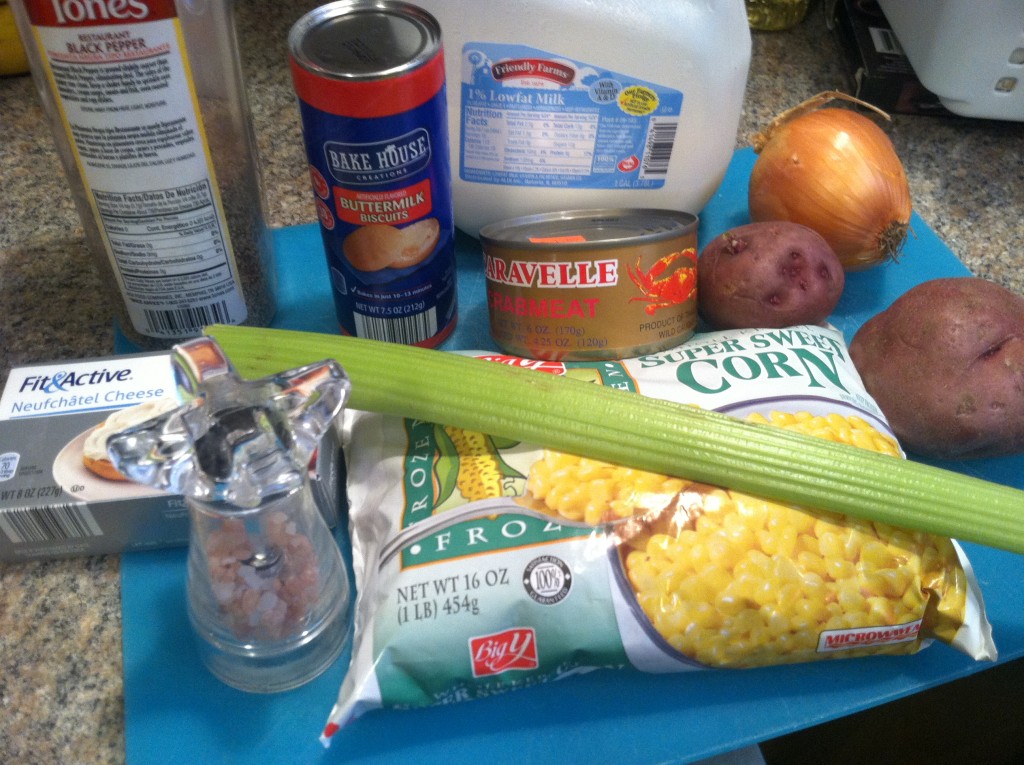 Step 1: In a large pan, add the oil, potatoes, celery & onion. Cover and cook for 5-7 minutes. Give it a good stir, then add in the corn and cook another 10 minutes, until everything is softened. 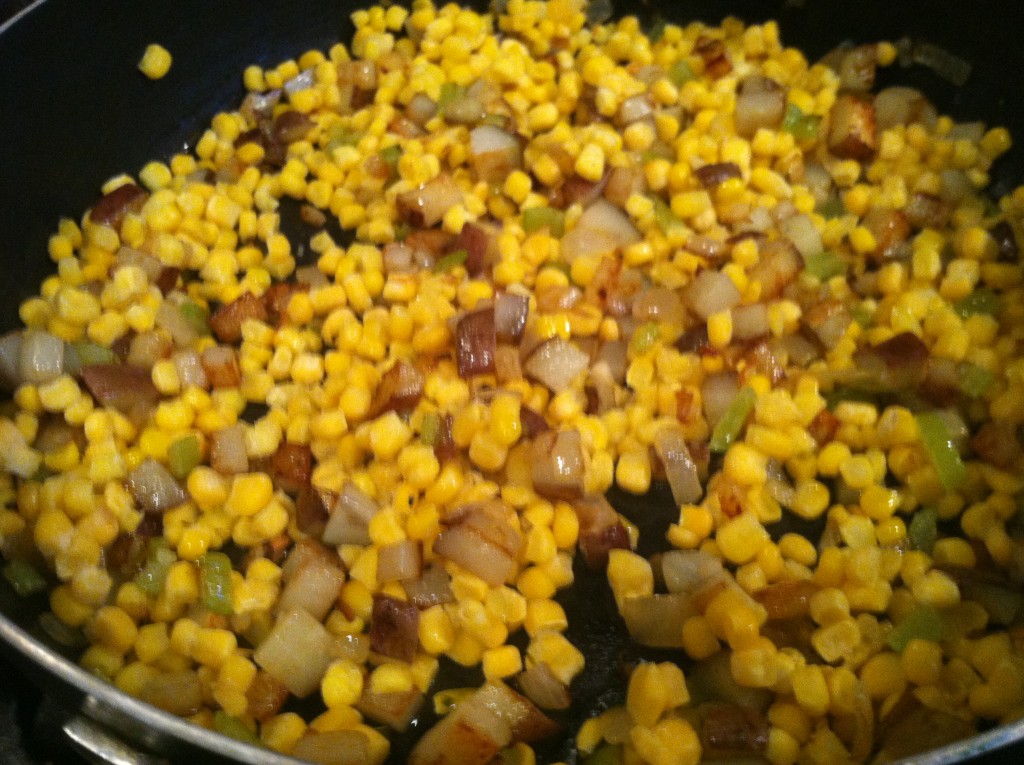 Step 2: Add in the water, fish sauce, and milk, adjusting to suit your tastes.

Step 3: Bring to just a simmer, and add in the cream cheese. Continue to stir as it dissolves. 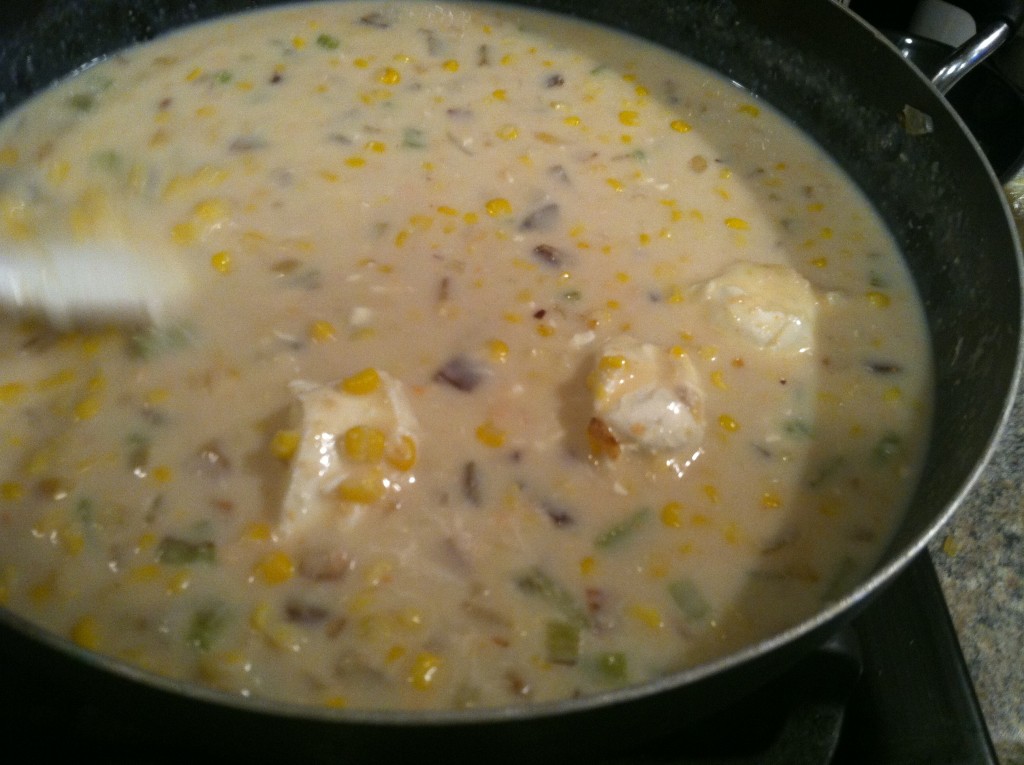 Step 4: Taste and add in the crab, black pepper, & salt. Let simmer until it reaches the desired thickness. 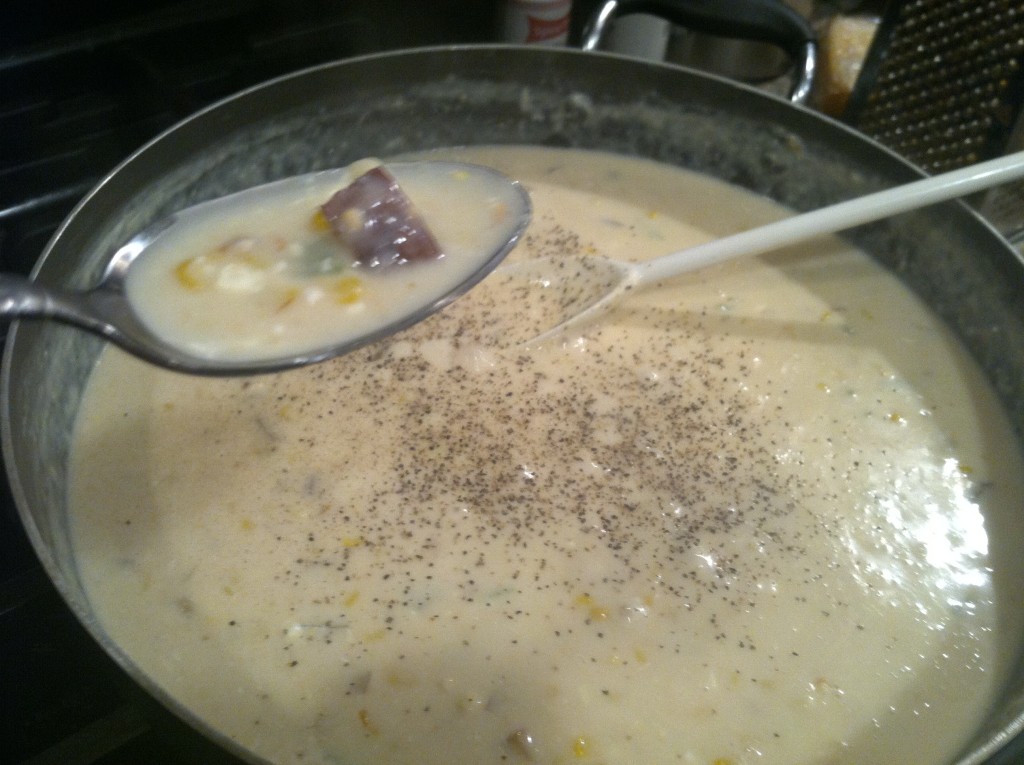 Step  5: If you made/bought biscuits to go along with it, place those in the bottom of a heavy bowl, and cover with a healthy scoop or two of the chowder. You could also use those little oyster crackers.

This stuff just smells divine, and is actually packed with tons of diced cooked veggies!

To thicken even more, you could add a few tbsp flour to the veggies after cooking, just before adding in the water and milk. 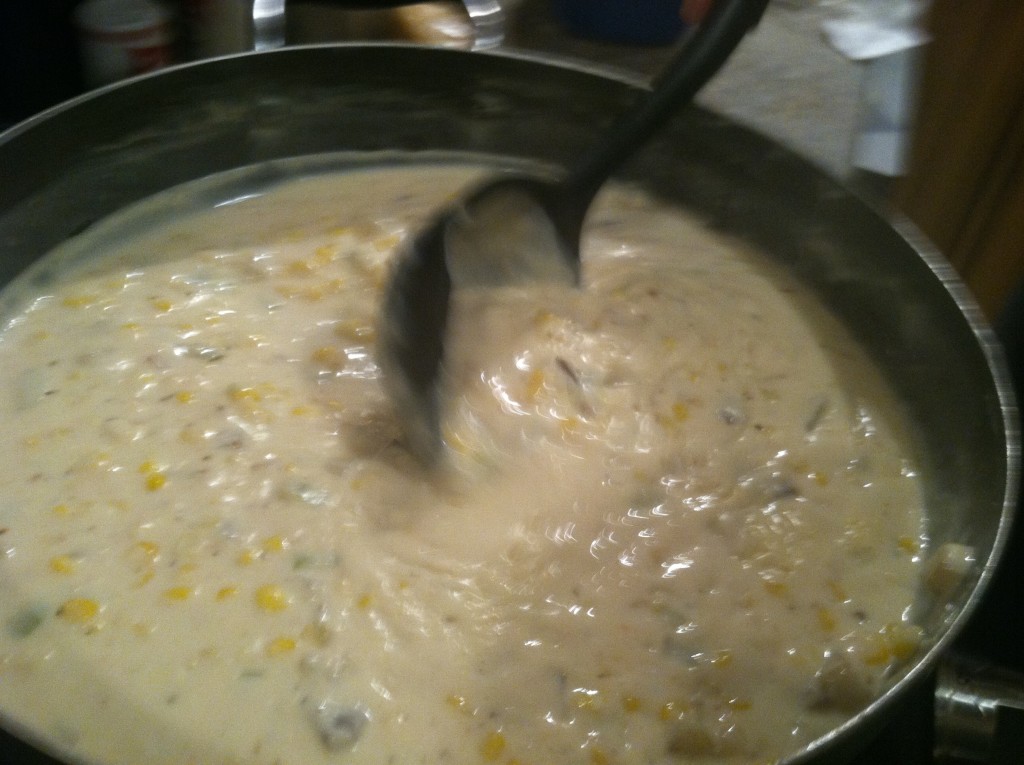 And if you don’t have skim milk, you could use any dairy really, half & half, whole milk, sour cream… Or just don’t use dairy &  keep it vegetarian. 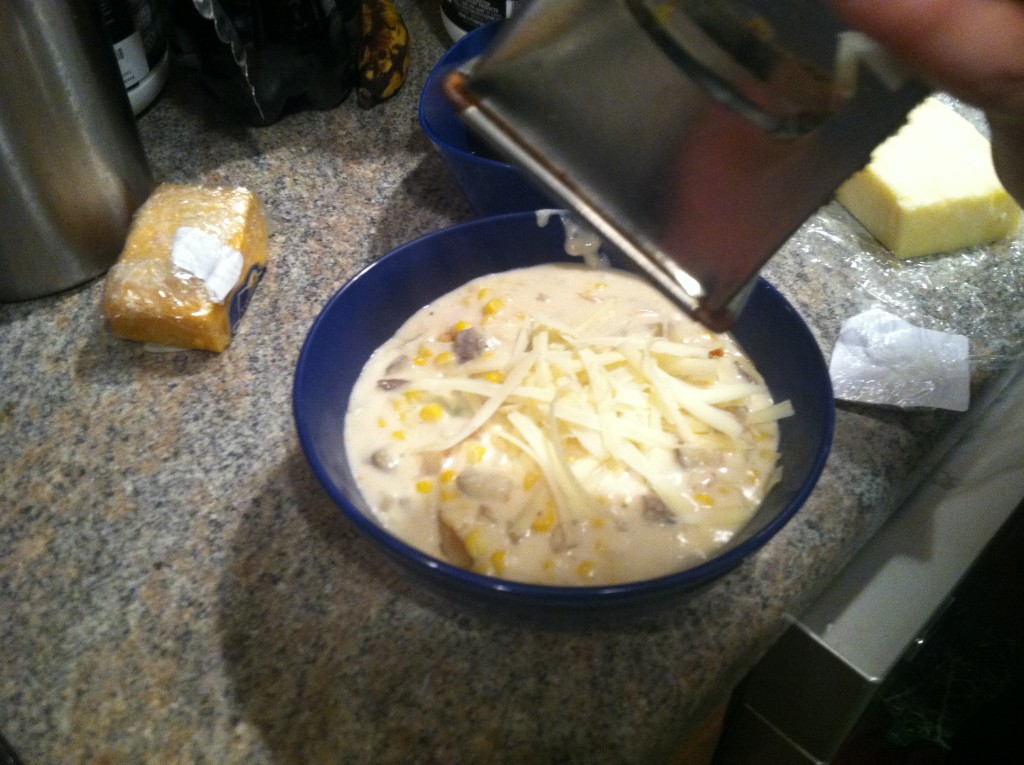 We grated some sharp white NY cheddar on top.

Absolutely delicious! And far healthier than restaurant versions as long as you control the dairy content.