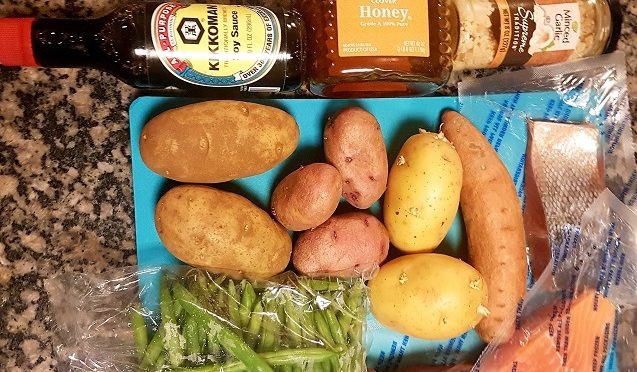 I love each and every one of you reading this. If you want a fabulous last-minute dinner idea that is drop-dead easy, I’ve got you covered.

How about we make everyone happy and start with the recipe, huh? 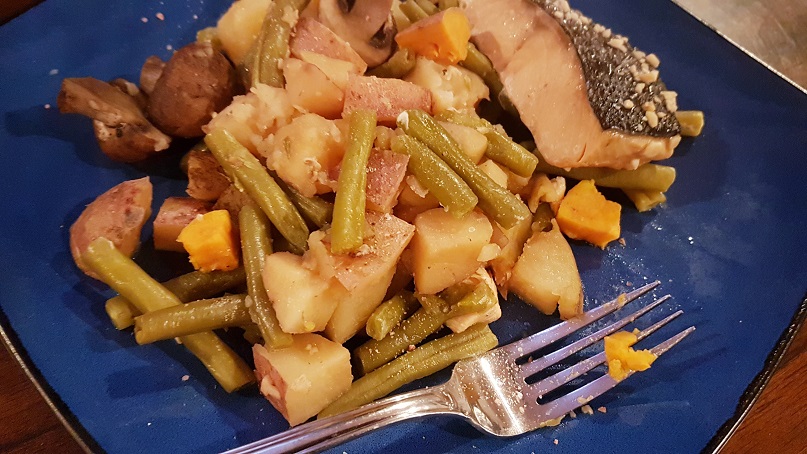 This recipe is very flexible! If you don’t like potatoes or green beans or just want some extra variety, add some carrots, onion, radishes, grape tomatoes, mushrooms, collard greens, or whatever suits your fancy.

This can easily be made vegetarian/vegan if you skip the fish and use tofu/tempeh or just a medley of veg instead. And you can adjust the cooking time, I have done 6 minutes (perfect) and 10 minutes (a little too much).

Step 1: Dice the potatoes into a medium size, add to the pot. I’ve used russet, sweet potatoes, redskin, and Yukon gold, and a combination of all of them, they all work well here. 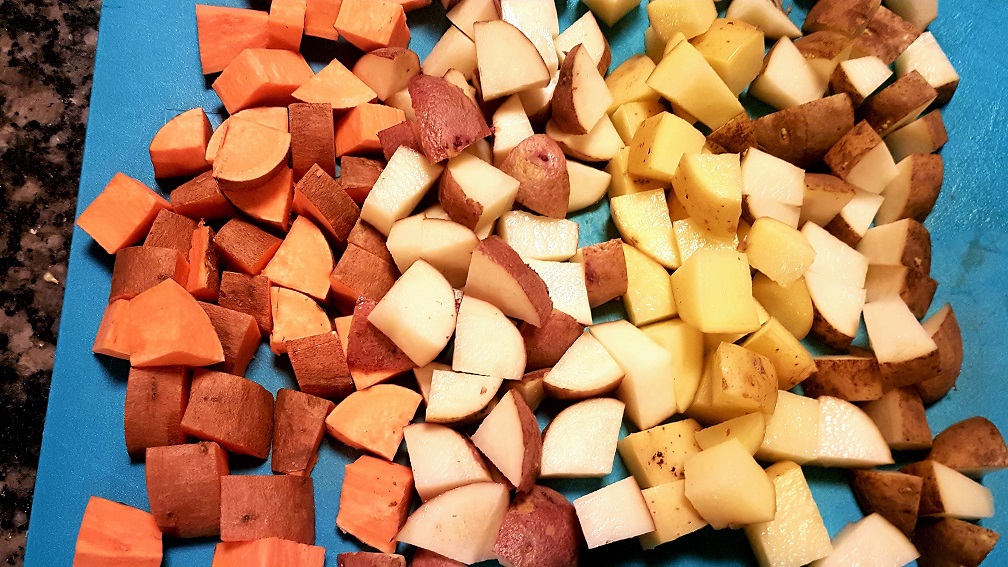 Step 2: If using fresh green beans, cut the ends off, discard any black or rotting beans. If using canned or frozen just toss em in. Add to the pot on top of the potatoes.

Step 3: Add the fish filets on top of the green beans, if they have skin, skin side up. I had salmon filets that were 3-4 oz each.

Step 4: Mix the rest of the sauce ingredients, and pour over everything. Set your cooker to 6 minutes. Then go do something else while it comes up to pressure and cooks.

This is a full meal in one pot, one dish to clean up! If you want a little more, you can serve it over rice, with crusty bread to sop up the juices, with a side salad, or over a bed of wilted spinach.

We had plenty for dinner for 2 with enough for 2 more containers of leftovers for lunch the next day.

Obviously this doesn’t have to be saved for a special occasion, you can have this any day of the week. In fact I encourage you to have it every day of the week! Just kidding. But I hope you like it, let me know if you try this in the comments!

If you want to adapt this for stove top: 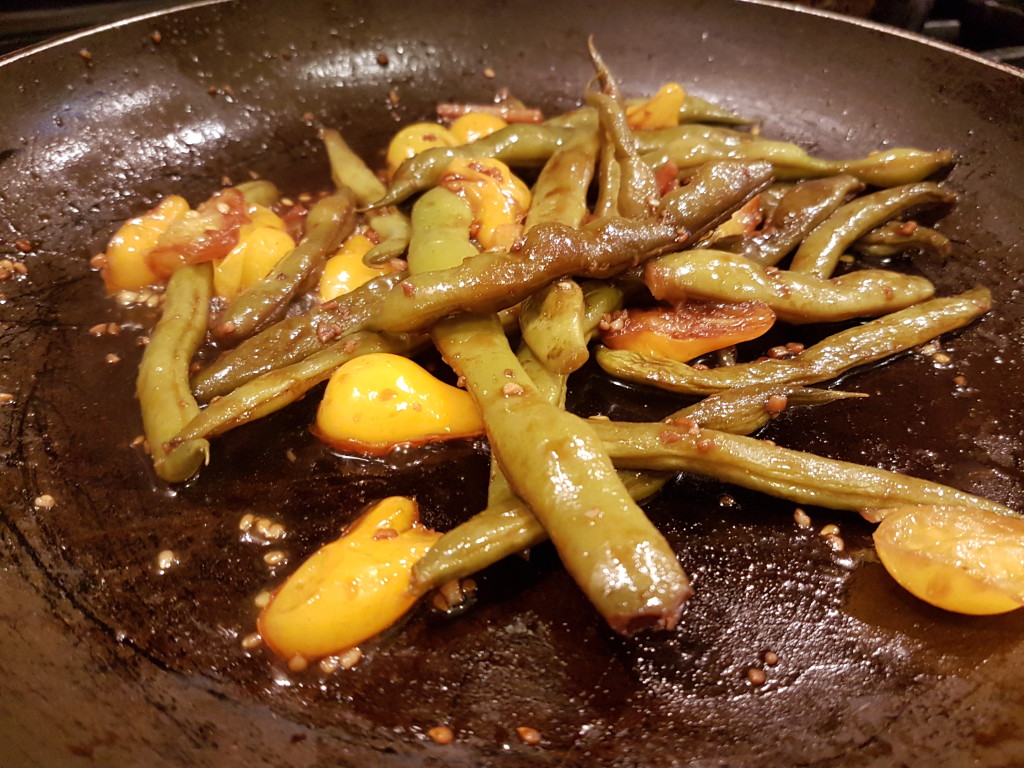 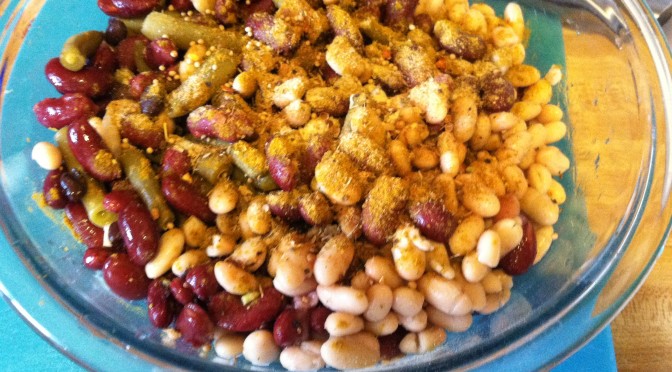 This dish was cooked up (pun intended) for a work potluck I had. I wanted a dish that didn’t take too much time and effort, since I would put it together the day of, maybe even the night before. And it needed to be something that made a lot, to feed a lot of people, but on a penny budget.

In comes my old best friends, beans, to the rescue! Beans are delightful, cheap, and filling. They come in endless variety too, so when you put several kinds together you get a healthy, hearty, and also pretty dish.

This is a very easily customizable adaptation of your typical “three-bean” salad, in that I simply added an extra type of beans. Here I used canned, but you can slash the cost even further by starting with dried beans, and cooking them in a crock pot on low overnight to rehydrate. Then drain and refrigerate until needed.

Step 1: Open all the cans, put the beans in a colander and rinse them several times with cold water. This helps remove some of the excess sodium and any preservatives that might have been in the canned juices. Mix in a large bowl with the peppers and onion. 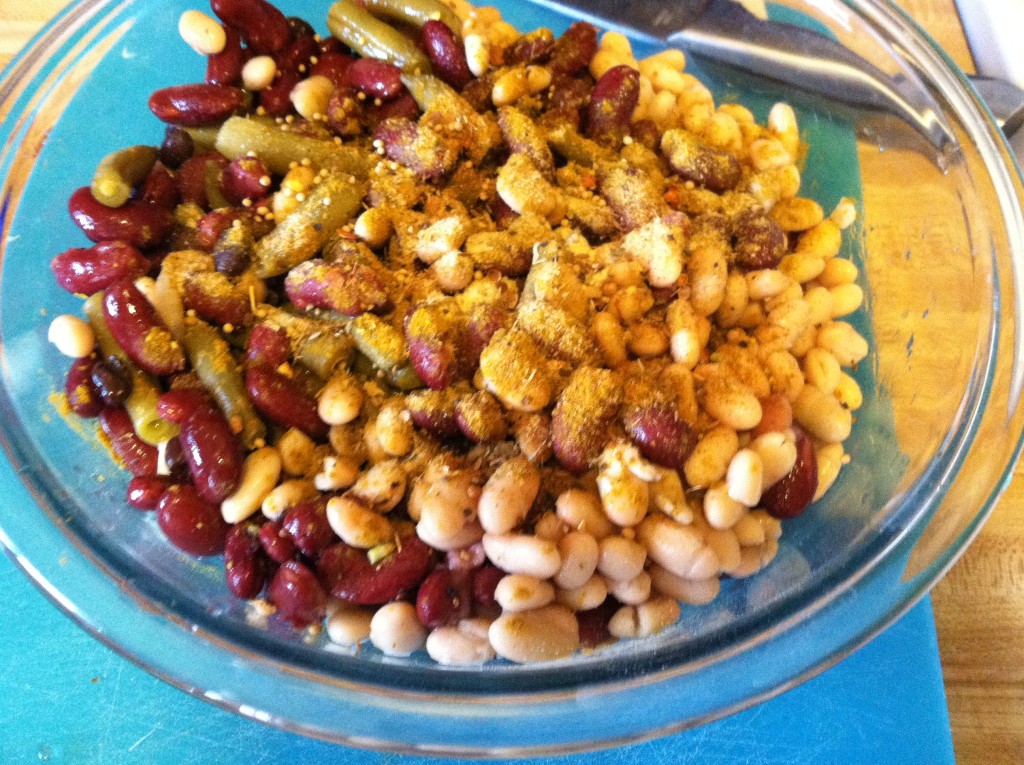 Step 2: Combine the vinegar and oil, and pour over the mixture. Add the spices, and mix everything up.

This post contains links to Amazon Affiliate Products. When you purchase items using these links, I make a small commission to keep this blog going, without affecting the price you pay. Thank you!