So I’ve been tutoring a high school kid in Biology for a year. He’s great, as are his parents. And his mother is a large part Native American. She is an amazing cook, I often show up to tutor and/or leave to tempting smells wafting from the kitchen. They are kind enough to ask me to share their dinner with them quite often.

As I love cooking myself, typically I have dinner already started in the Crock pot or at least plans, so I decline. However, one night she was serving up this thick, red stew that smelled too irresistible. This was my first introduction to pozole. 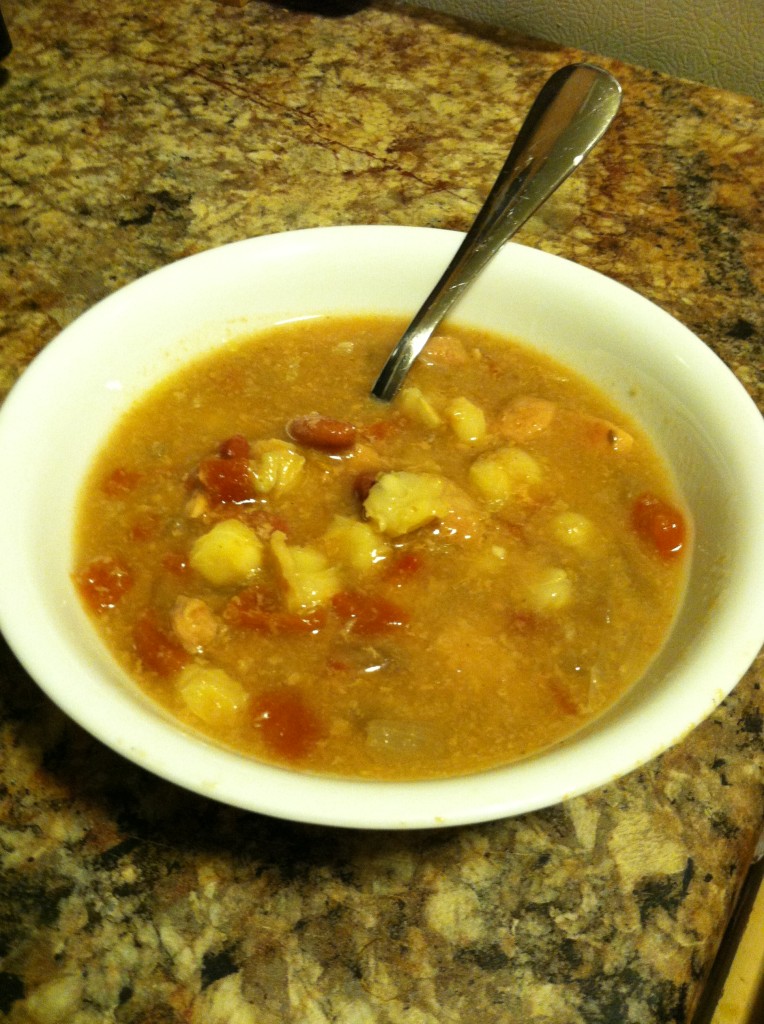 Pozole means “foamy”; also spelled “pozolli” or “posole”. It is a traditional stew originally from Mexico, which once had ritual significance due to its use of maize, called hominy. The word “hominy” comes from the Powhatan language word for prepared maize. (Maize is corn).

Hominy is a very interesting thing. To make it, you take regular corn kernels, dry it, and then treat it with an alkaline agent to break down the cellulose in the corn. The result is puffy, chewy, soft kernels that look a little bit like corn-shaped popcorn.

Well, this tomato-pork-hominy stew was unlike anything I’d ever had, so of course I had to ask for the recipe. She had gotten it from the Denver Post a few years back, and was more than happy to share it with me. 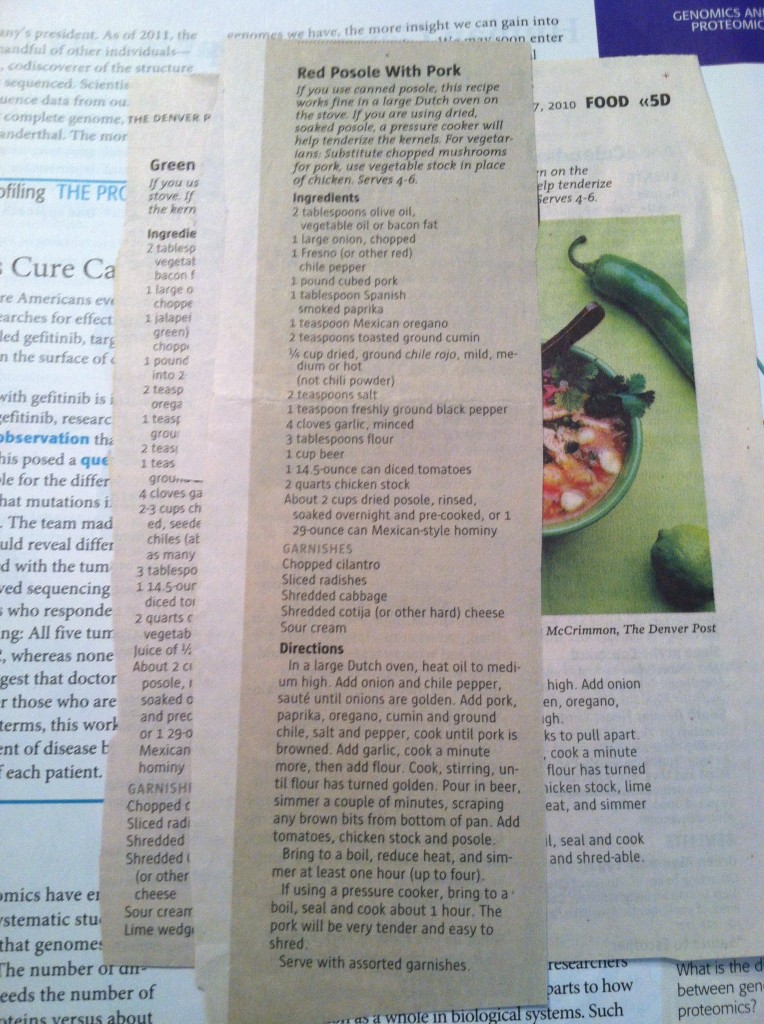 The red pozole with pork is the recipe I used and show here, but there is also one for Green Pozole with Chicken. I’ll save that for another day. 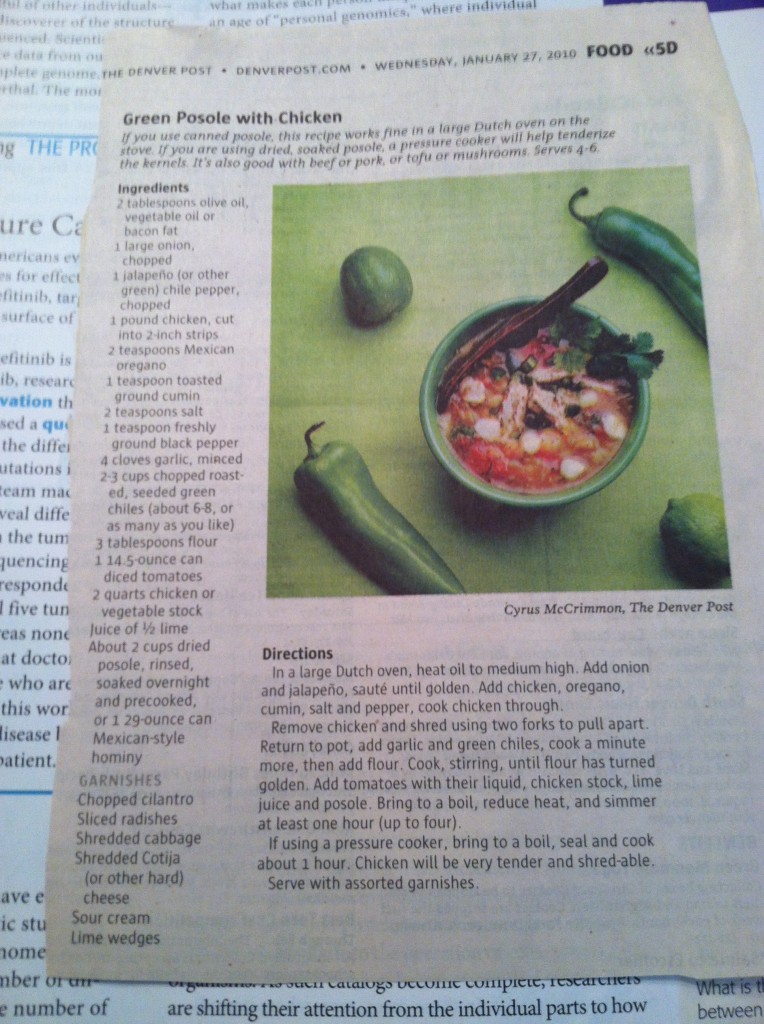 I wanted to try this right away, but I forced myself to be patient. Normally I just center my grocery shopping around sales, but this time I kept an eye out for the ingredients I needed. Anytime I want to make something with a unique or expensive ingredient I try to wait to maximize my food dollars. As soon as I saw hominy on sale at the local Save-A-Lot I snagged a can.

As is my way, I took the recipe, tweaked it a bit to what I like and what I had in the house, and it turned out wonderful! I don’t like spicy foods, so I left out the peppers, but I did throw in a pinch of dried chipotle pepper to keep the Native American feel of the recipe. If you want to go all the way and buy the exact spices called for, be my guest. But I omitted the Mexican oregano, and used regular paprika, not Spanish. I also added a can of red beans for extra fiber and filling power. 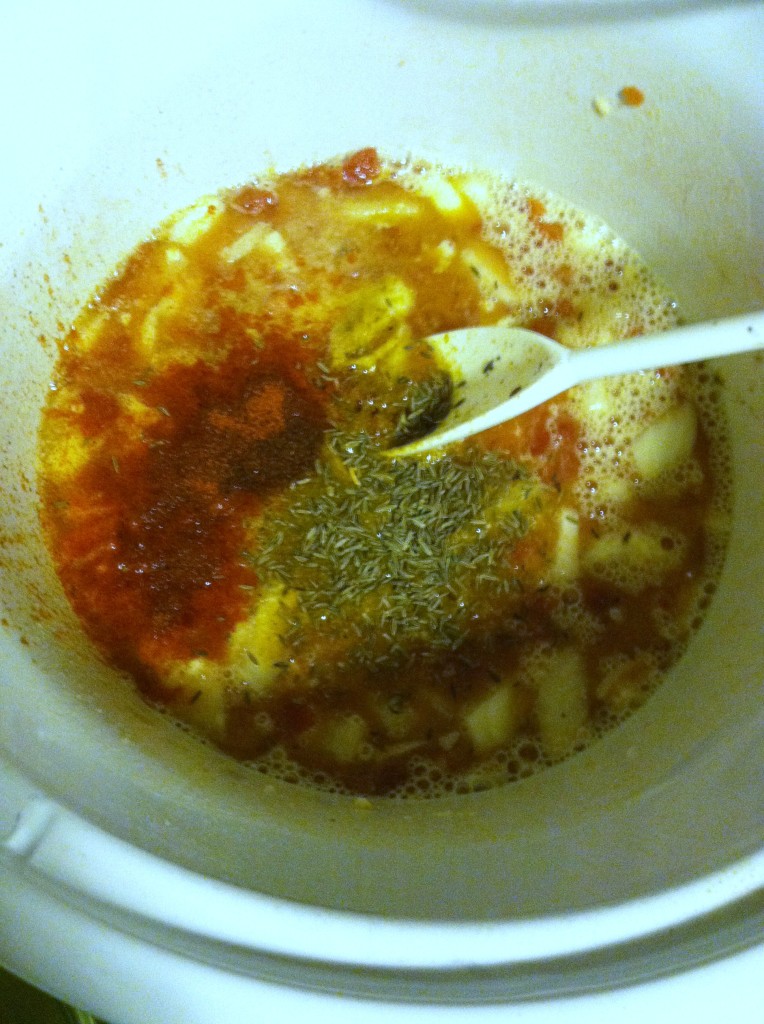 Step 2: Heat water in the microwave for 2-3 minutes, dissolve the bouillon cubes and add to crock pot. Or just use chicken stock.

Step 3: Dice the pork roast into bite-sized cubes. I had a 1.4-pound roast defrosted, so I used that. But you could use chops also.

Peel or cut off fatty pieces to make it more lean. 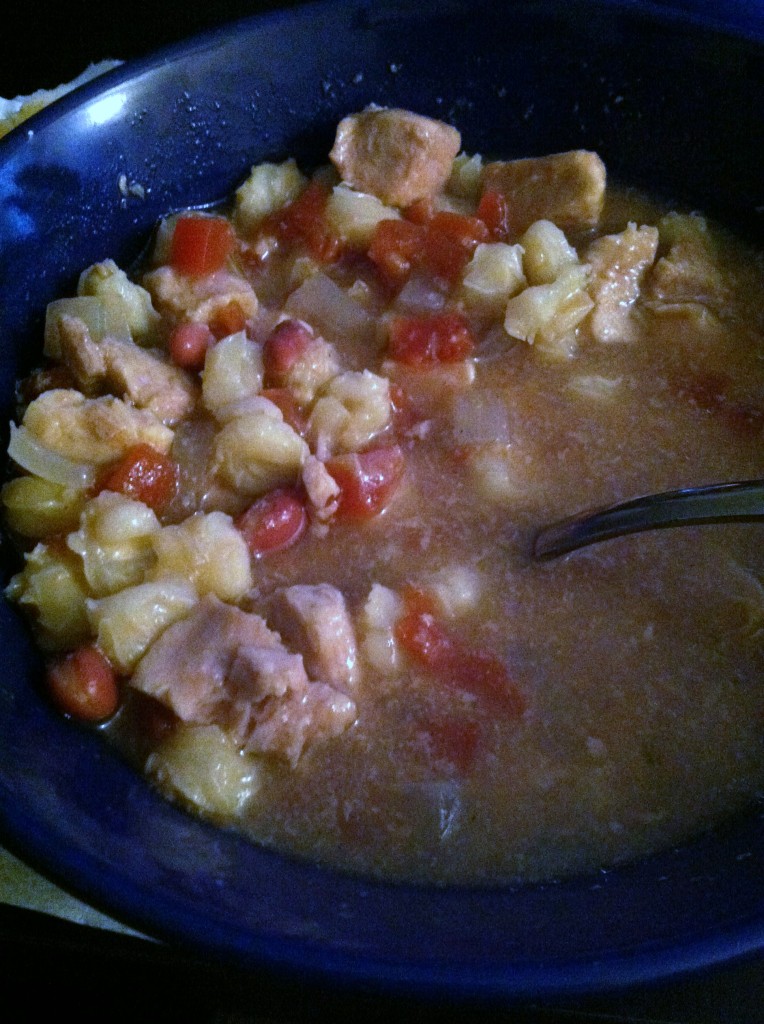 The finished product is a complex but light stew, with an amazing depth of flavor. You can obviously add more spice to your taste, but I loved it the way it was. I also didn’t have ground cumin, so the little pieces were annoying at the bottom, but the flavor they added was worth it.

I made some biscuits to serve with the posole, and my s.o. loved it too. The recipe suggests shredded cabbage, radish, cilantro, cheese, or sour cream as garnishes. If you add extra flour or cornstarch you can make it thicker, add more stock to make it more soup-like.