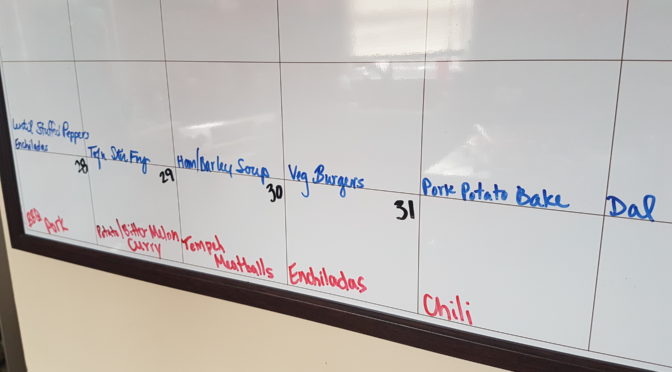 This weekend I was on my A-game with meal prepping. 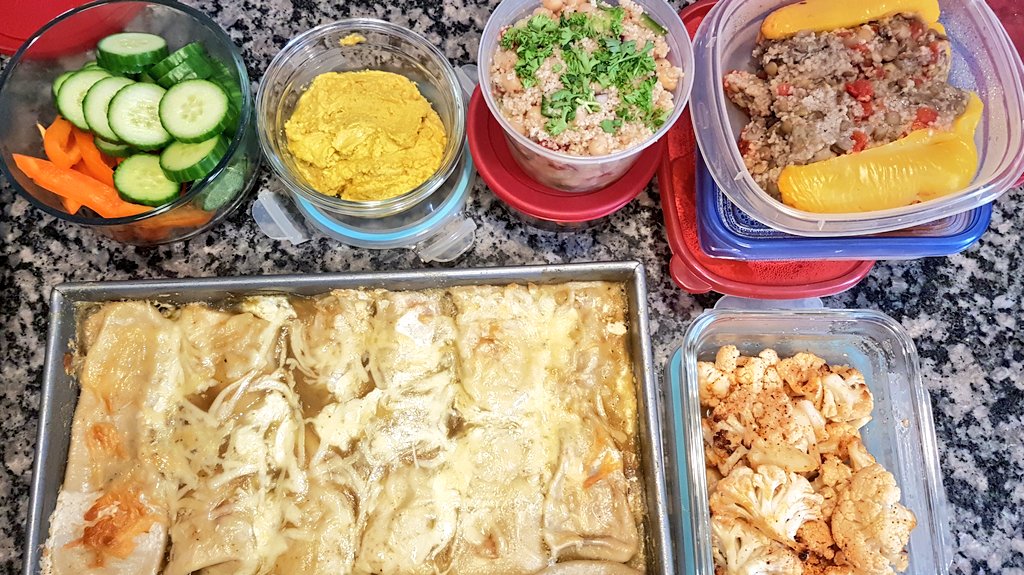 Bell peppers were on sale for 0.99/each, which usually only happens in the height of summer. So naturally I planned on making a batch of stuffed peppers. I’d also been hankering for hummus, so I whipped up a half batch in the blender, and at the last minute decided “why not throw in some turmeric too?” It came out a lovely vibrant yellow! I even used real tahini rather than my usual cheap-o peanut butter. 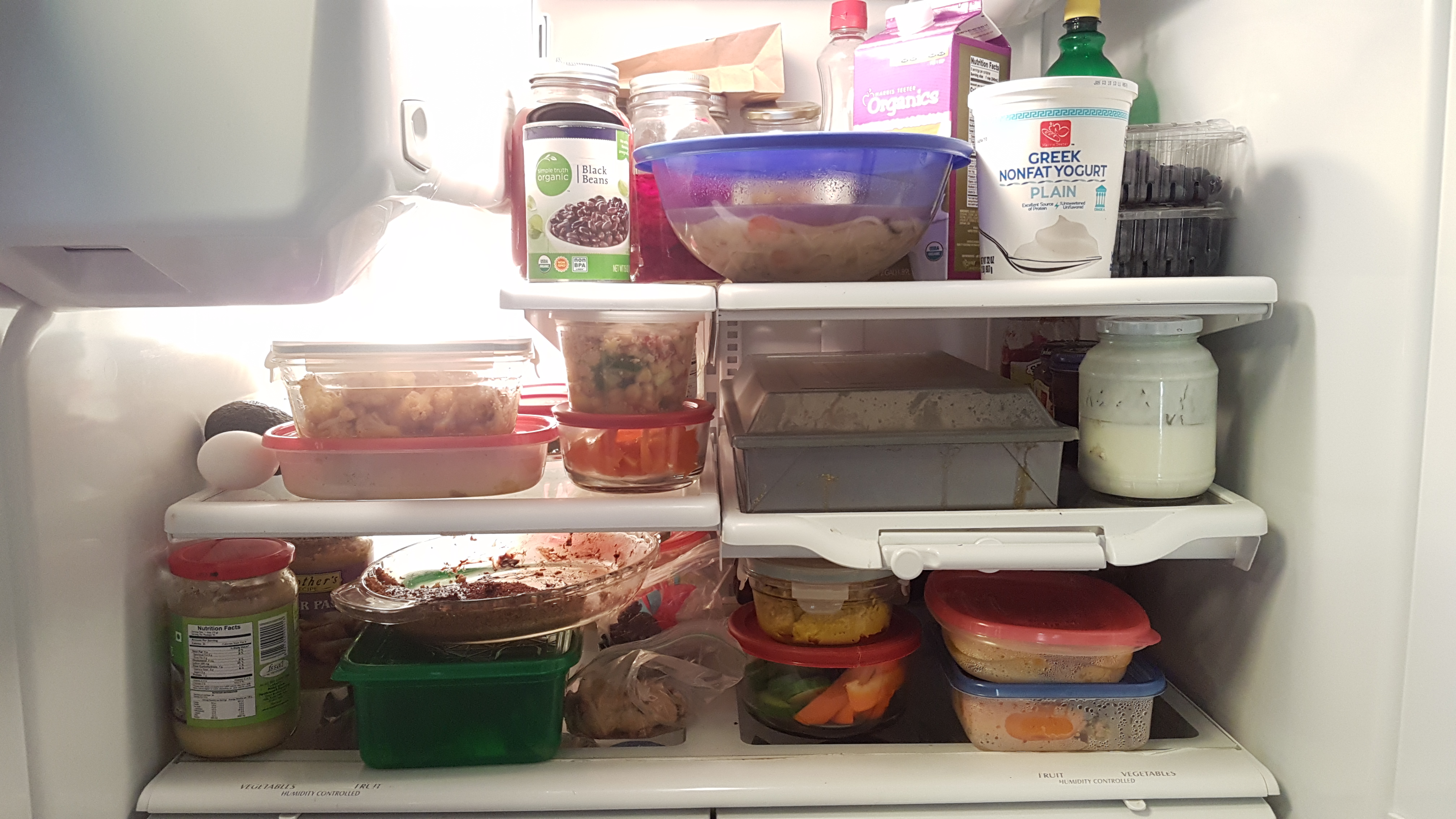 With the other half can of chickpeas I made a Greek tabbouli type salad with cucumber, tomato, couscous, and red onion. (CRAP! I should’ve added kalamata olives too… ah, next time.) Bags of pre-cut cauliflower were cheaper per pound than buying a whole head, so I roasted a bag of that and added buffalo sauce for funzies. And a big ol pan of enchiladas, mostly pork for the boy with two black bean and mushroom vegetarian ones for myself. 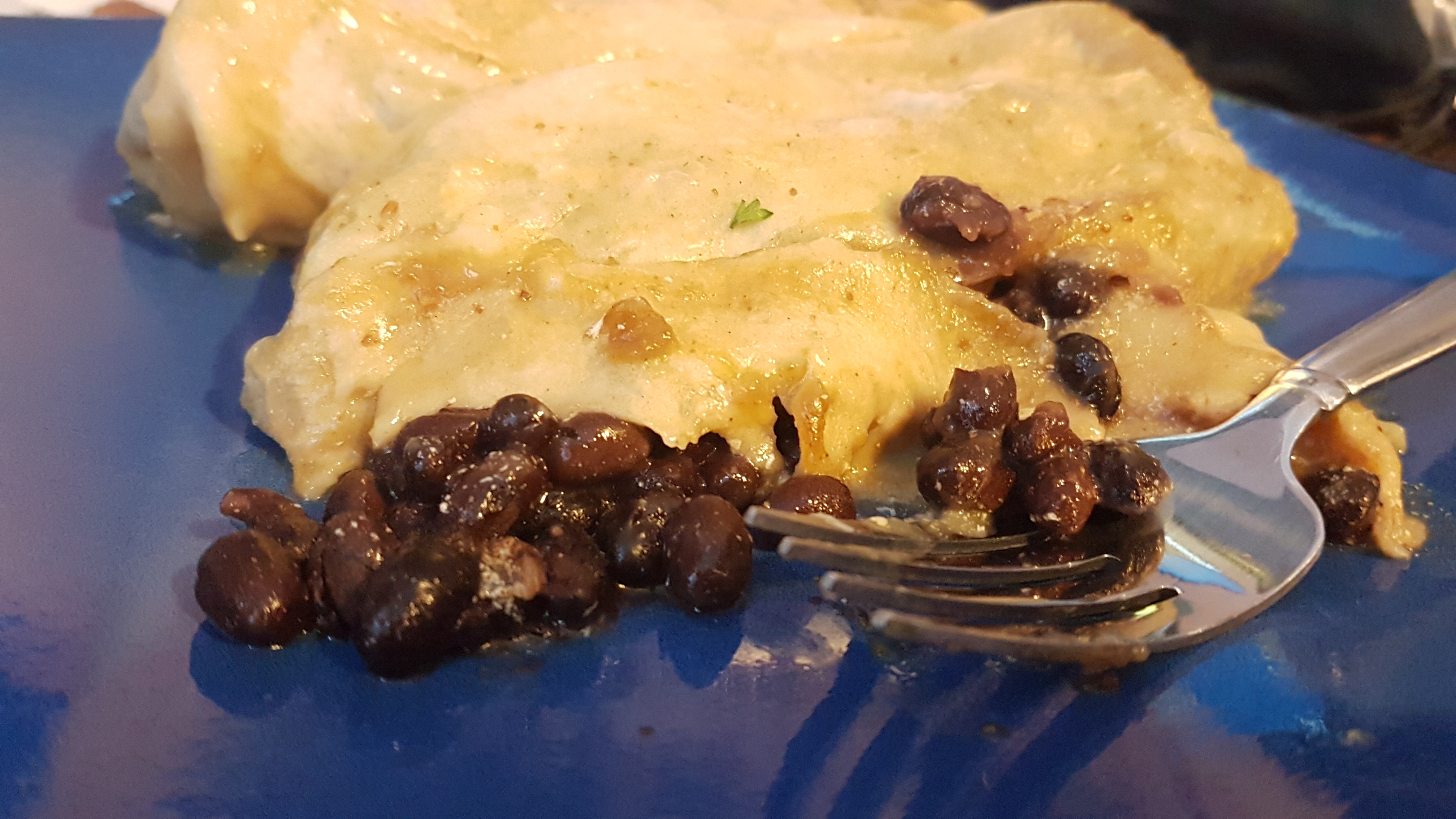 Blueberries were also on sale this week, so I portioned out a few small containers. Whew! Now, on to the week!

Breakfast – a piece of fruitcake from the holiday Food Swap! I had never had fruitcake, since it has such a sterling reputation, but y’all. This lady’s recipe was amaaaaaazing! It was dense and moist cake, and was just bursting with huge chunks of mango, apricot, papaya, and whole nuts. It was seriously addictive. I’m so bummed it is a super secret family recipe, she legit won’t share it! 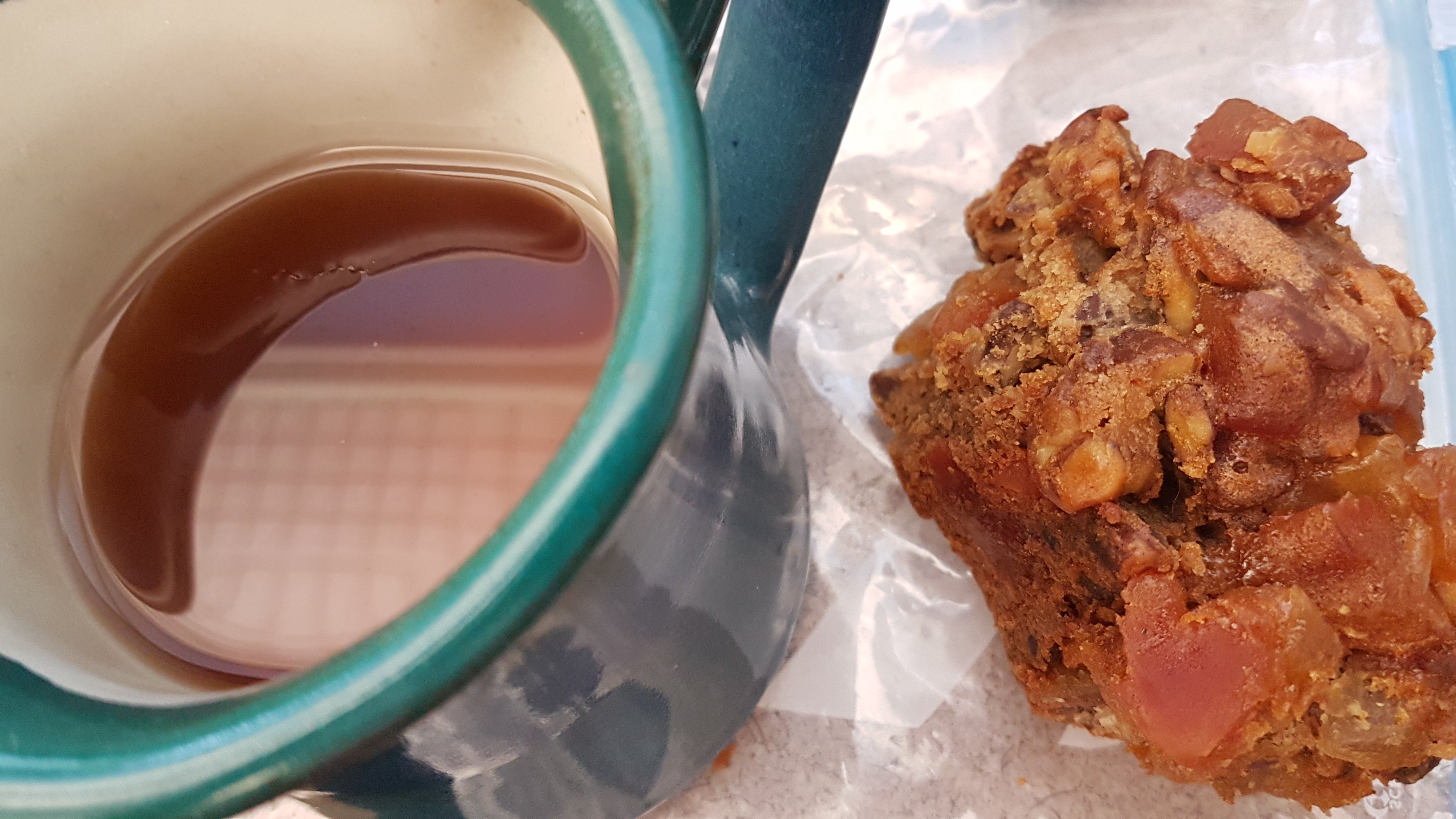 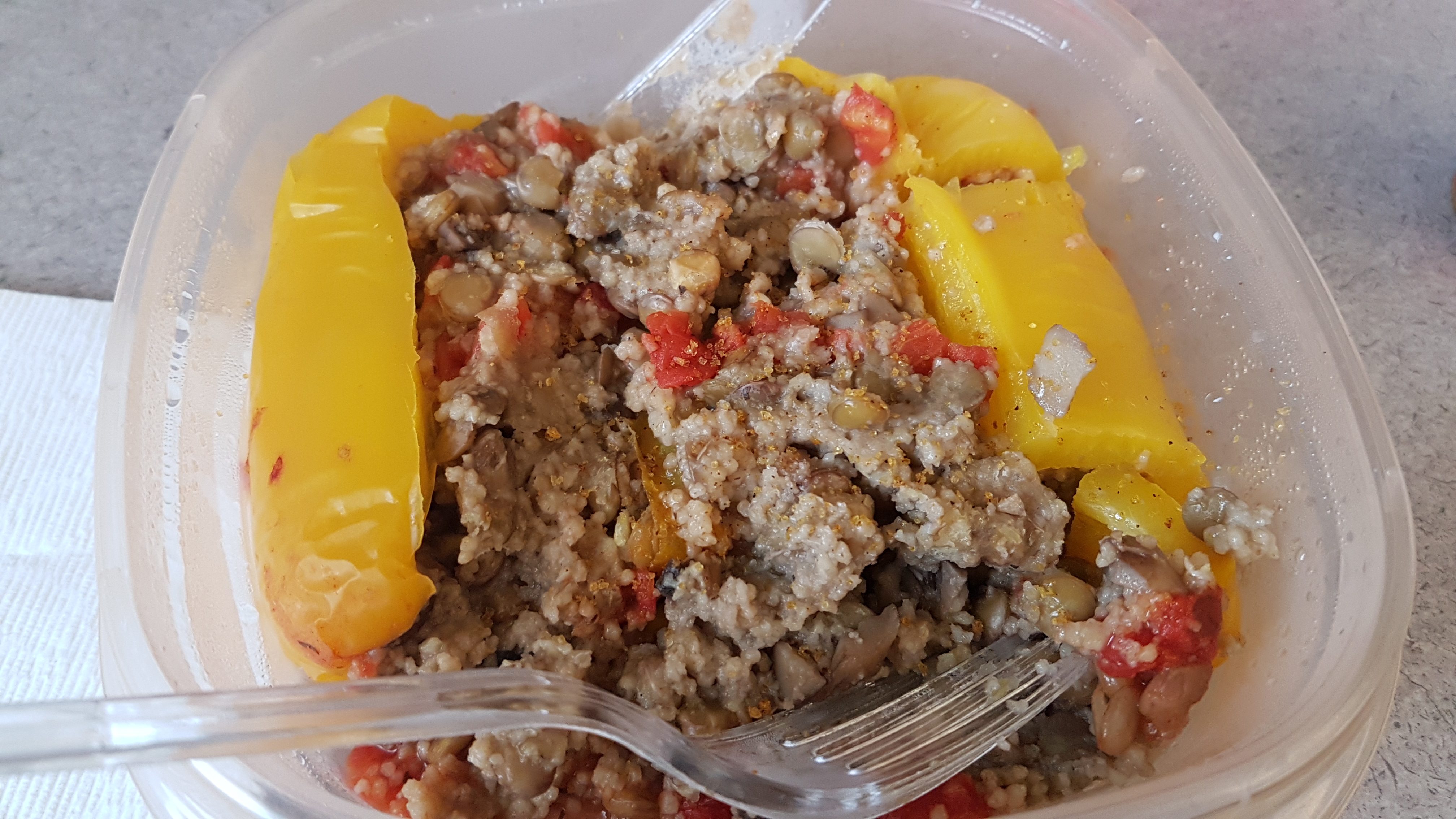 Dinner – Stir Fry! I used some veggies from the fridge and some from the freezer, plus the tofu from the sale a few weeks ago, to whip up tonight’s batch of stir fry. 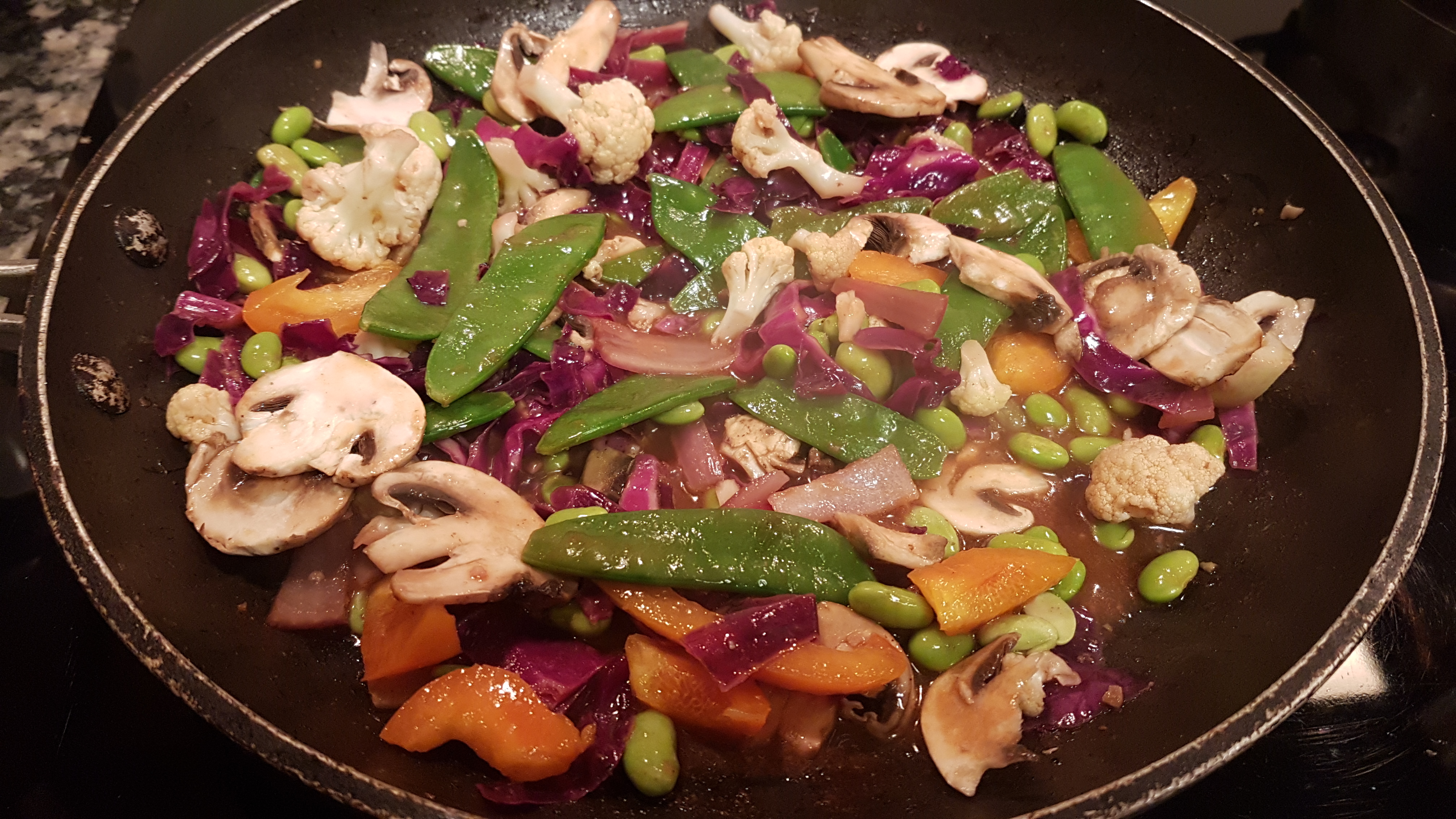 Note to self: when oven-baking tofu, don’t use the pre-chunked kind! The pieces are just too small and stick to the pan something awful. It was still super tasty though. 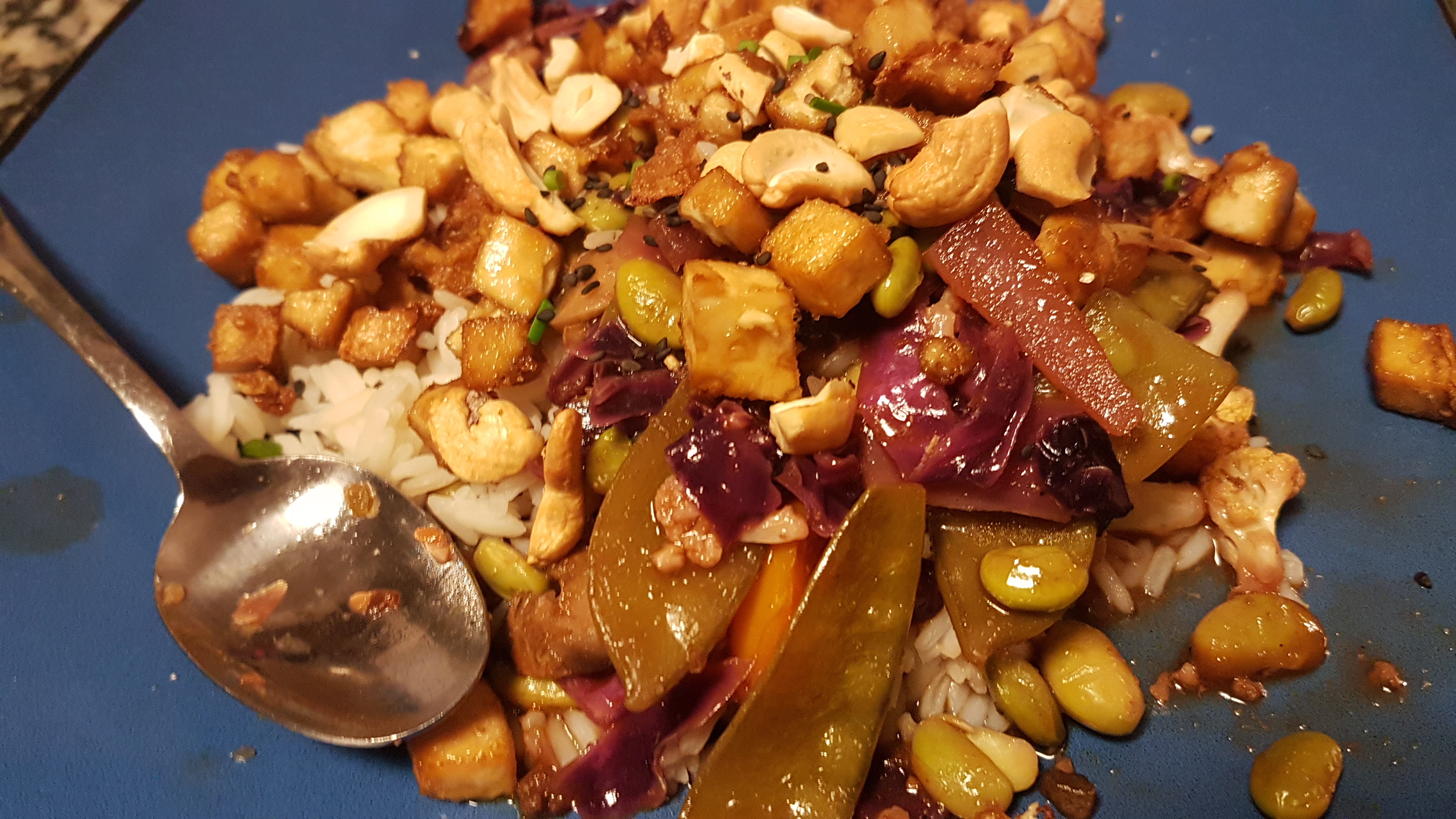 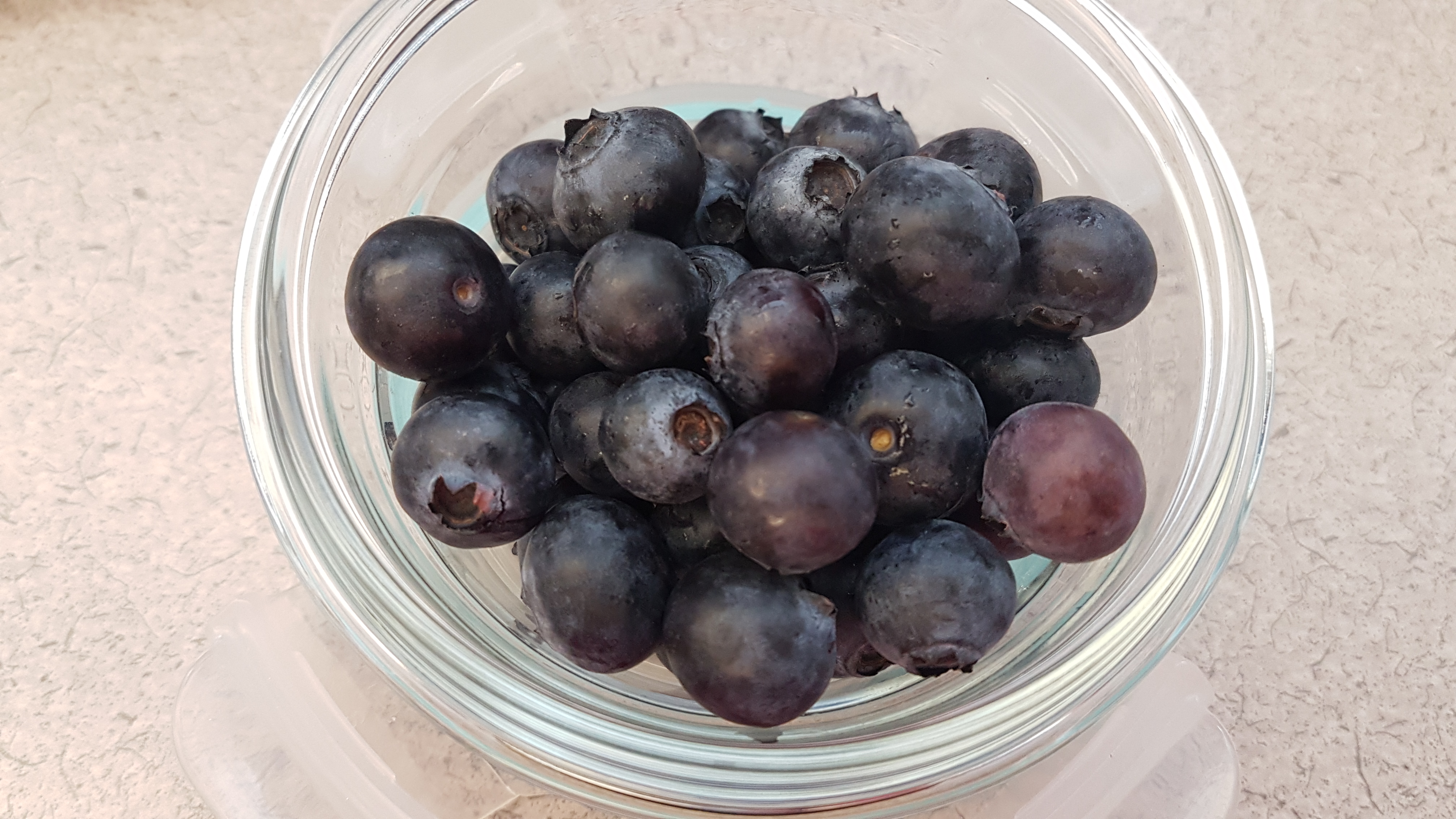 Breakfast – I made some oatmeal with dates, but forgot to take a photo, oops! It was tasty and warm, and very filling.

Lunch – Tabbouli. I like this type of meal because it’s totally fine at room temperature and very portable. I didn’t even need a lunch bag I just threw it in my work bag and went. 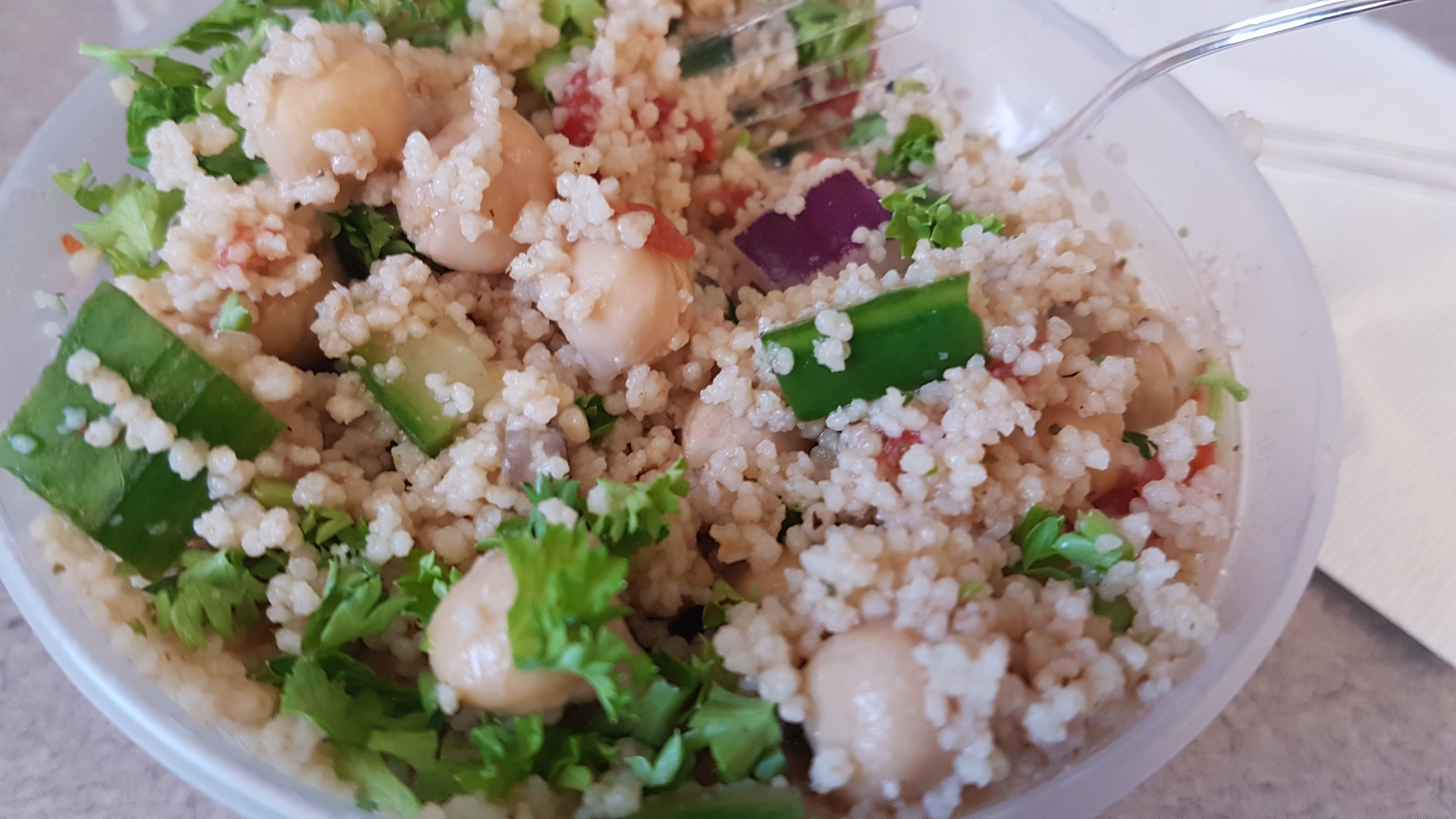 Snack – I had got some protein bars on super sale (like 90 cents) and tried one today. It was horrid. It was hard but chewy, and tasted like basically a caramel with protein powder. And also had chunks of raw coconut. Gag. I swallowed the one small bite and tossed the rest. I hate wasting money 🙁

Dinner – White Bean & Barley Soup – this was a crossover between my Ham & Barley Soup and my White Bean Soup. I didn’t have a lot of ham, just a tiny bag of a few frozen cubes left over from who knows when that we found in the freezer. So I figured, add a can of white beans to bulk it up, and dang, it was a great combo! This might be my new go-to. 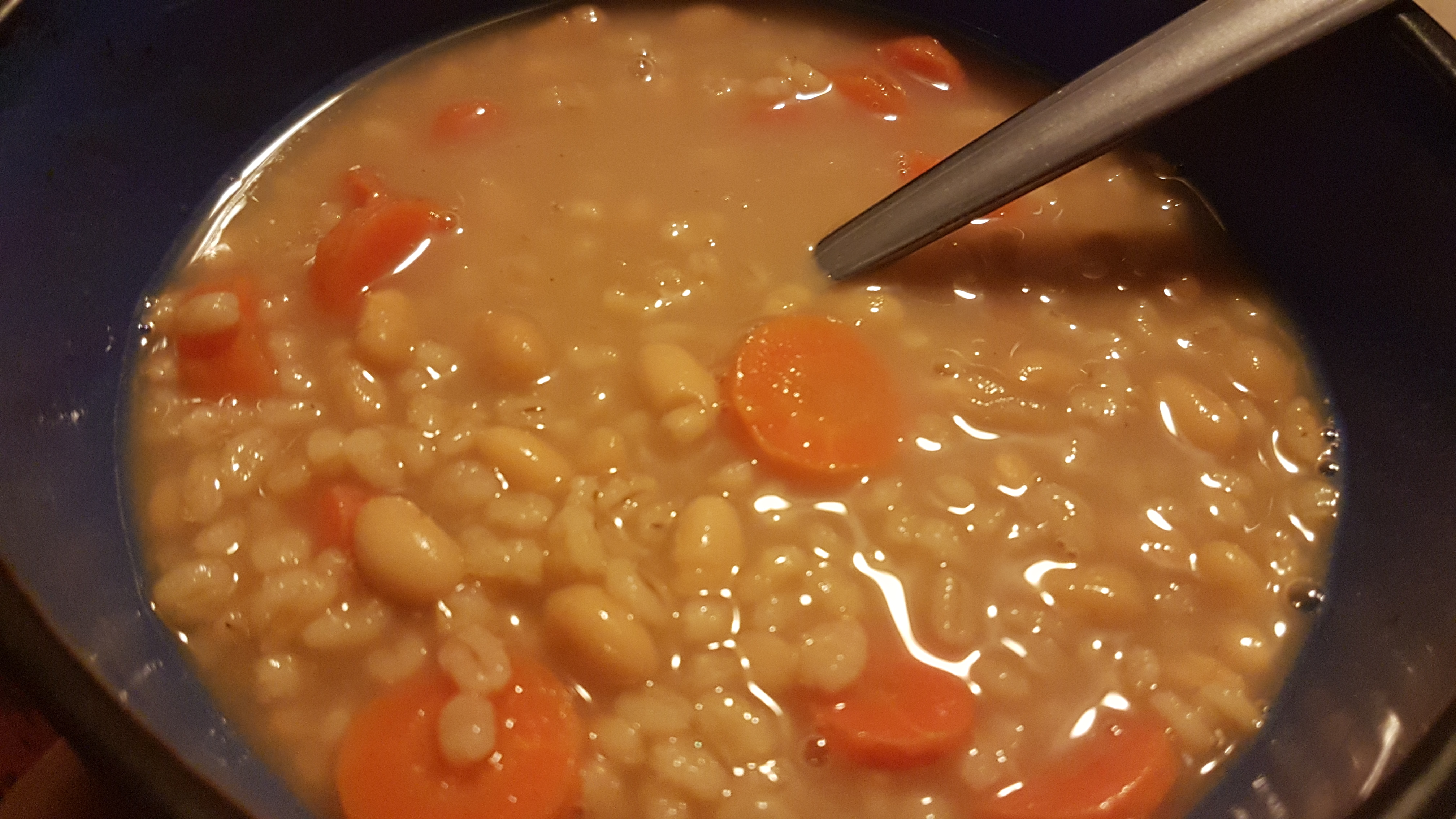 Breakfast – loaded baked sweet potato. I zapped it in the microwave covered in a wet paper towel for 10 minutes, then piled on some black beans, salsa, purple sauerkraut & avocado. Mind blowingly good, and I nommed the whole thing! 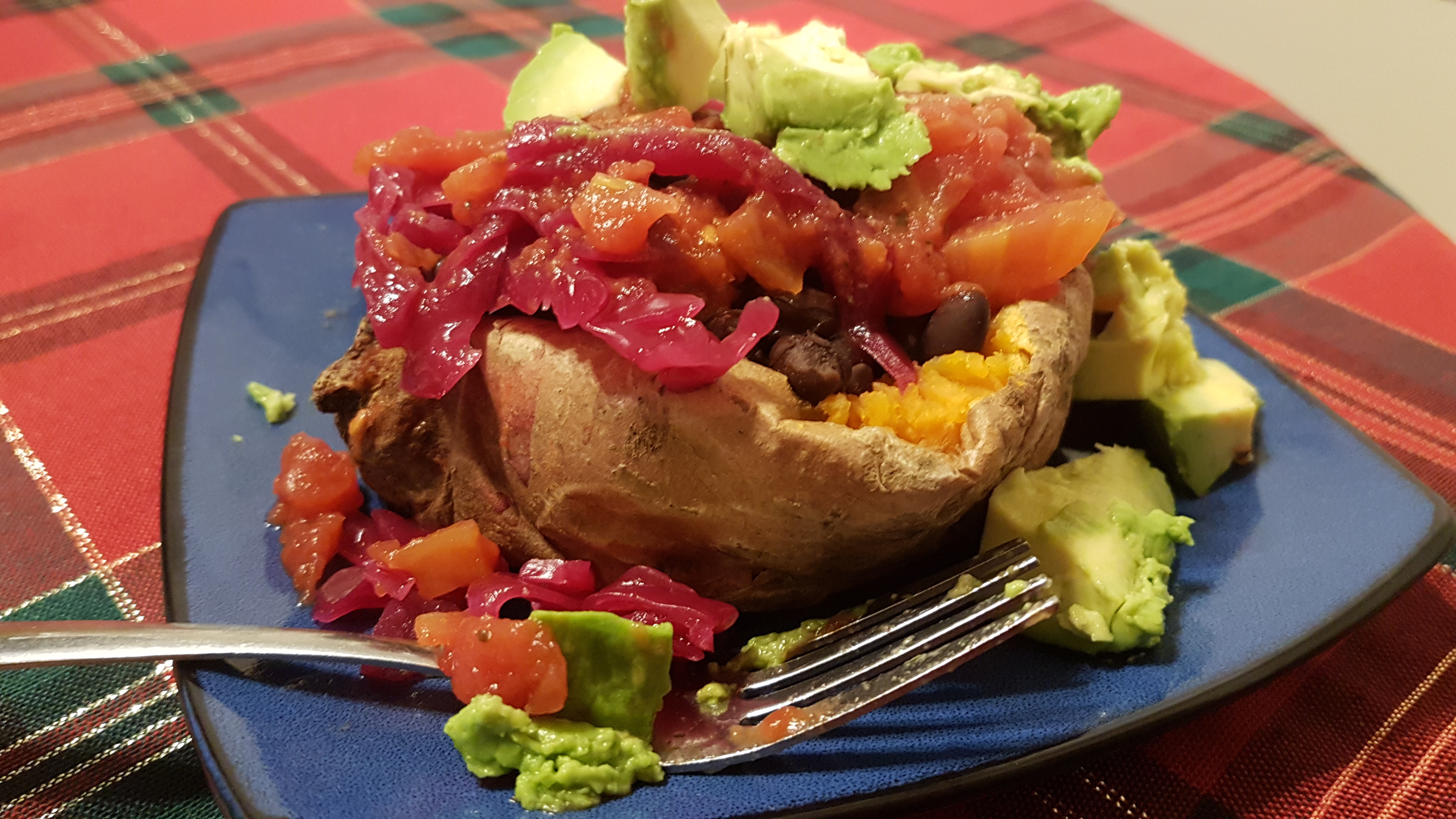 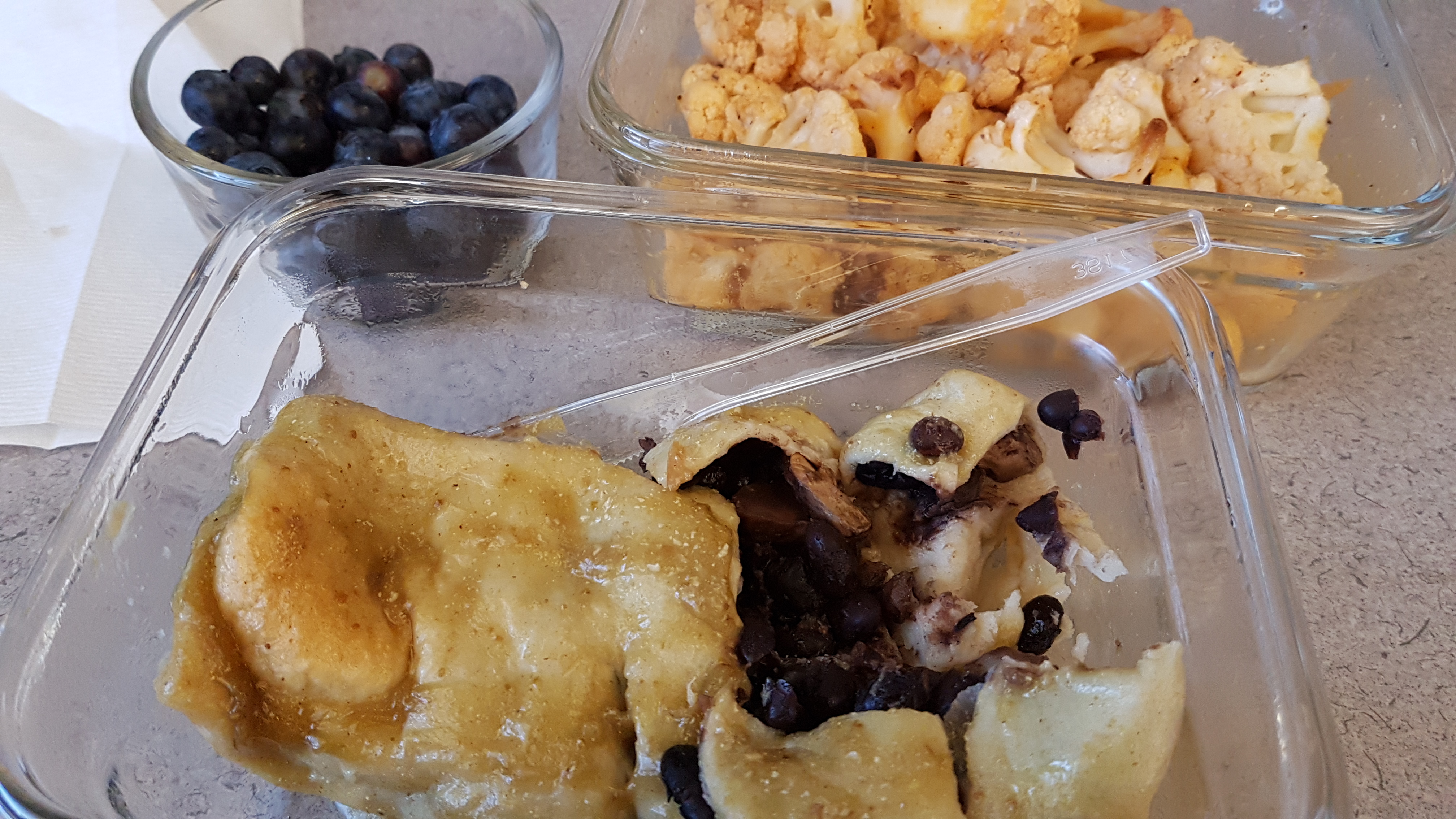 Dinner – Black bean veggie burger with Green Goddess, sauerkaurt, freezer mac n cheese, and veggies on the side. Yes, I know I had black beans at every meal today, and yes I’m quite proud of that fact. 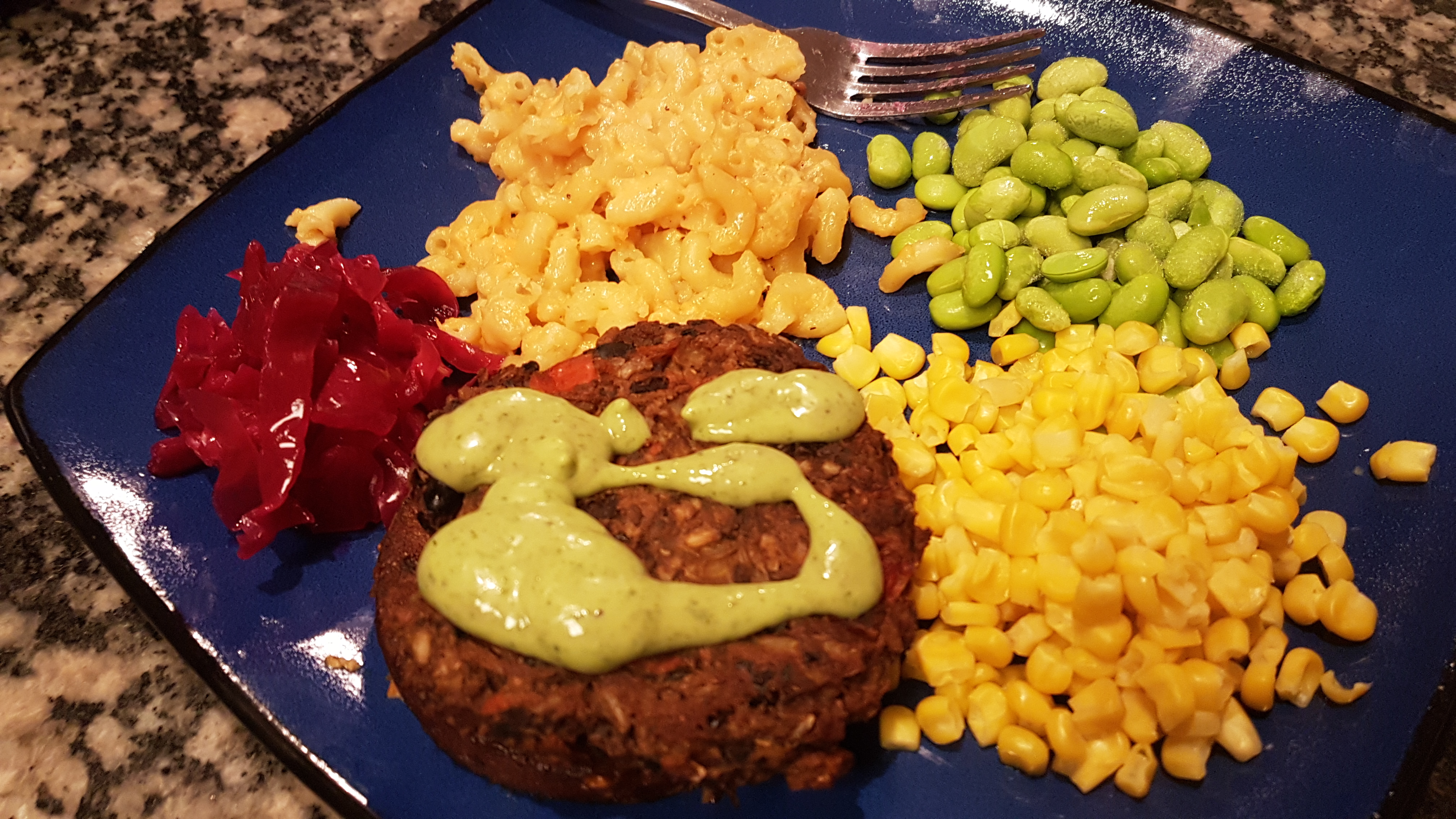 Making our way further into the freezer, I pulled out a box of Aldi black bean patties and an old pre-made mac n cheese, plus some frozen edamame and corn on the side for a colorful, healthy, and super filling dinner. 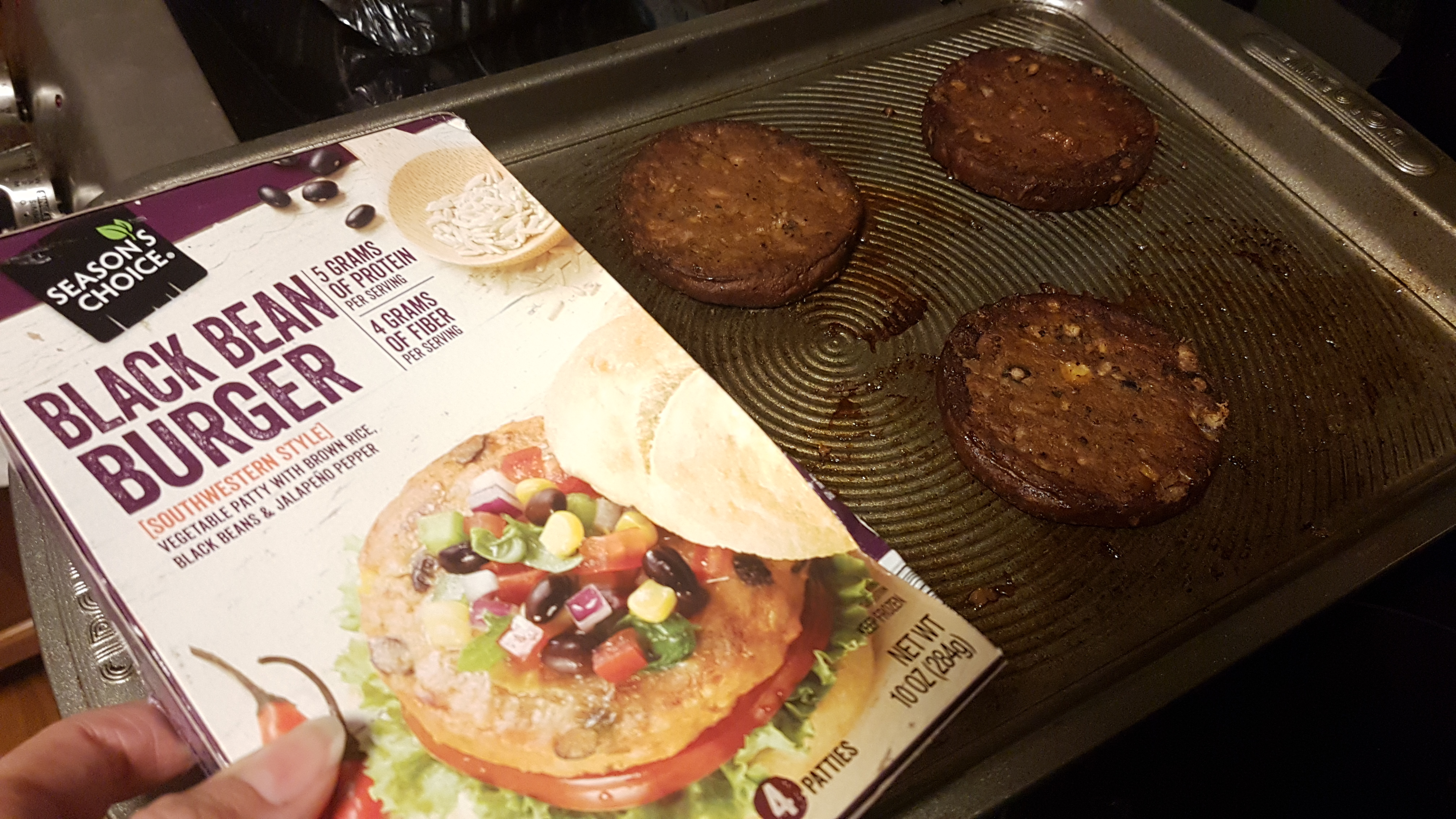 Snack – tea and a Stroopwafel. GUYS. Have you had a Stroopwafel?? It is as much fun to eat as it is to say! It’s a thin, crispy waffel, well, two of them, with a layer of sweet salty caramel in between. It is absolute heaven with a cup of hot green tea. 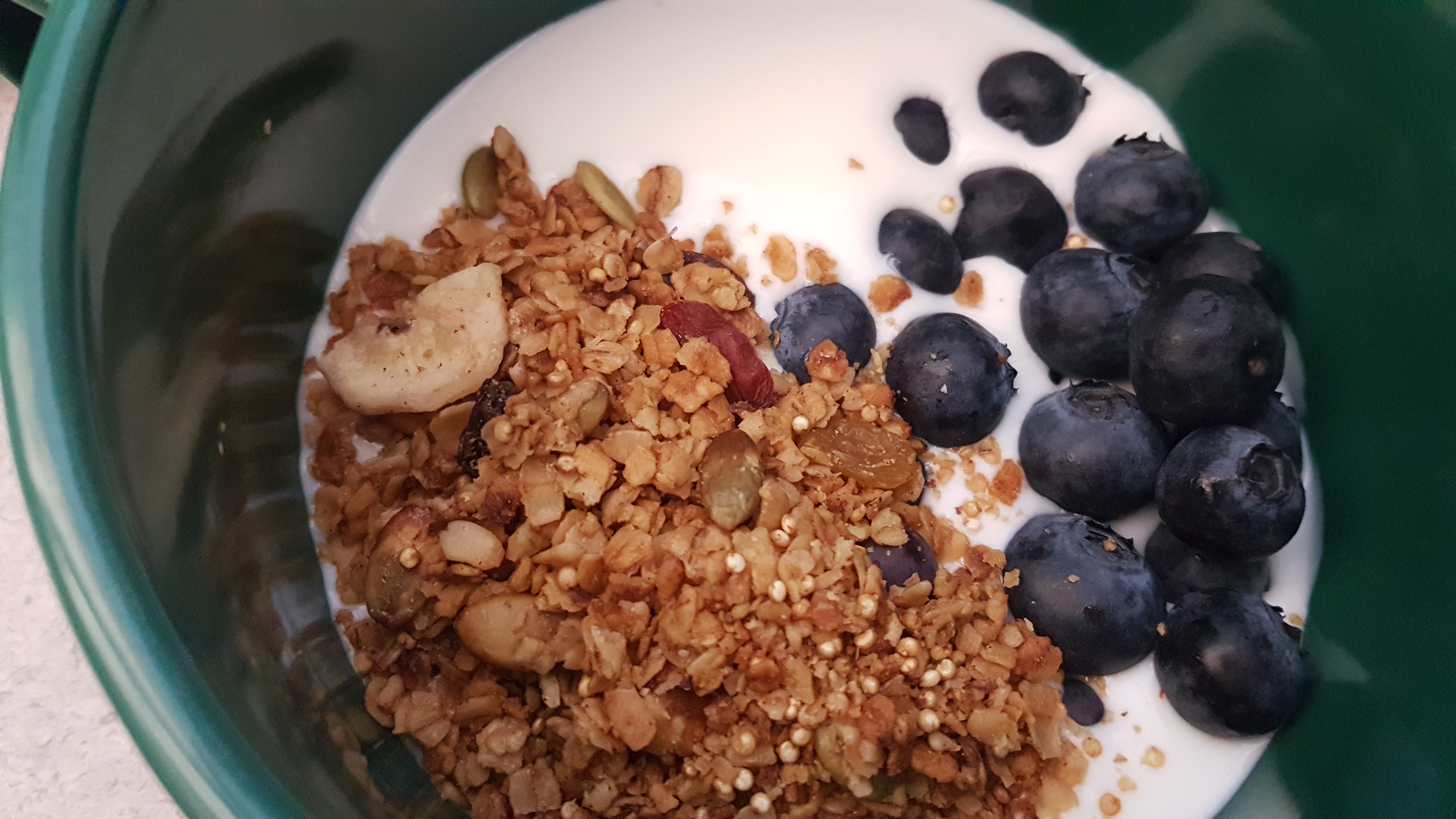 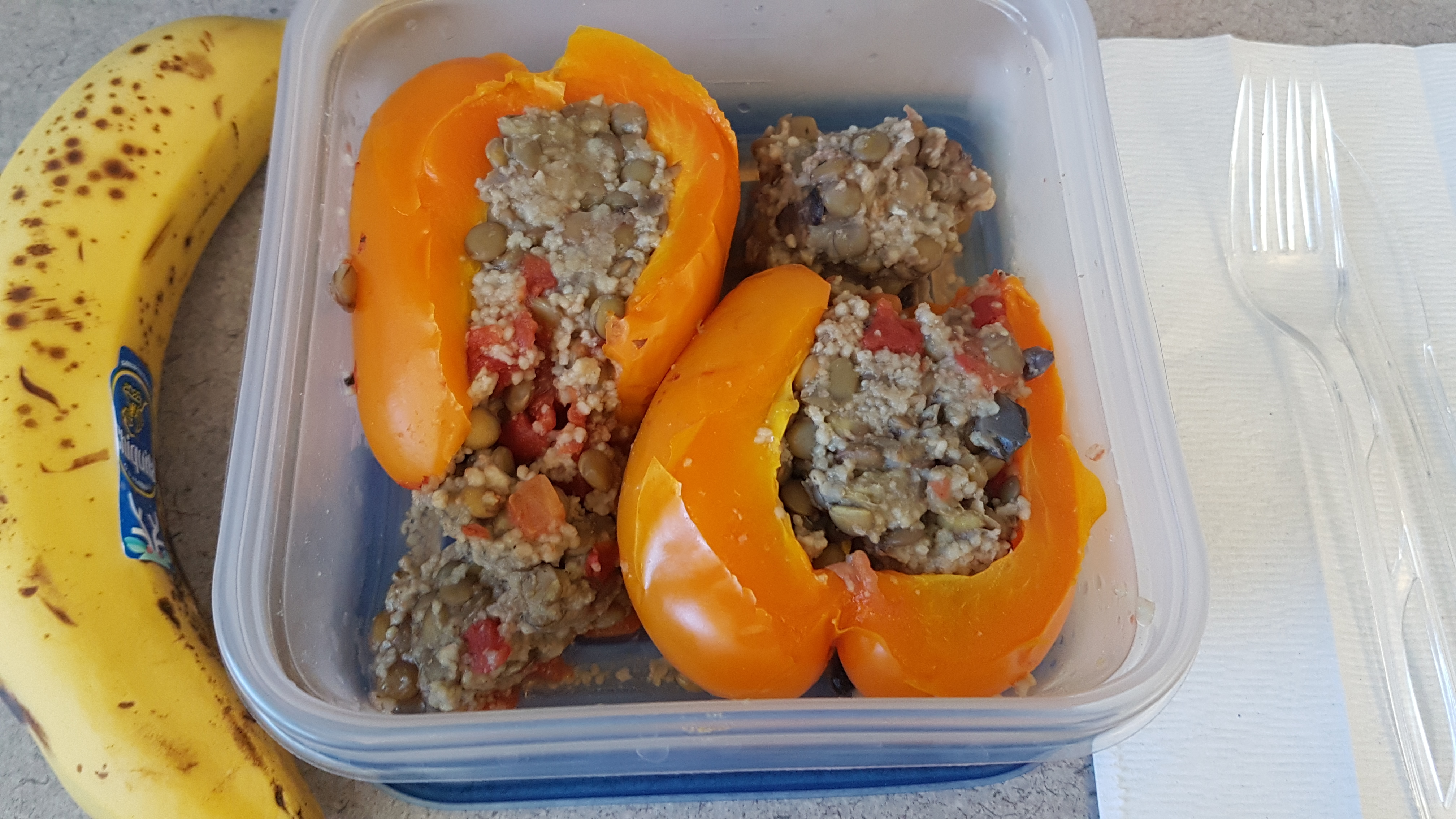 Dinner – The famous One-pan Buffalo Potato Bake, with previously cooked & frozen pulled pork. Have I mentioned my love of freezer meals enough yet? 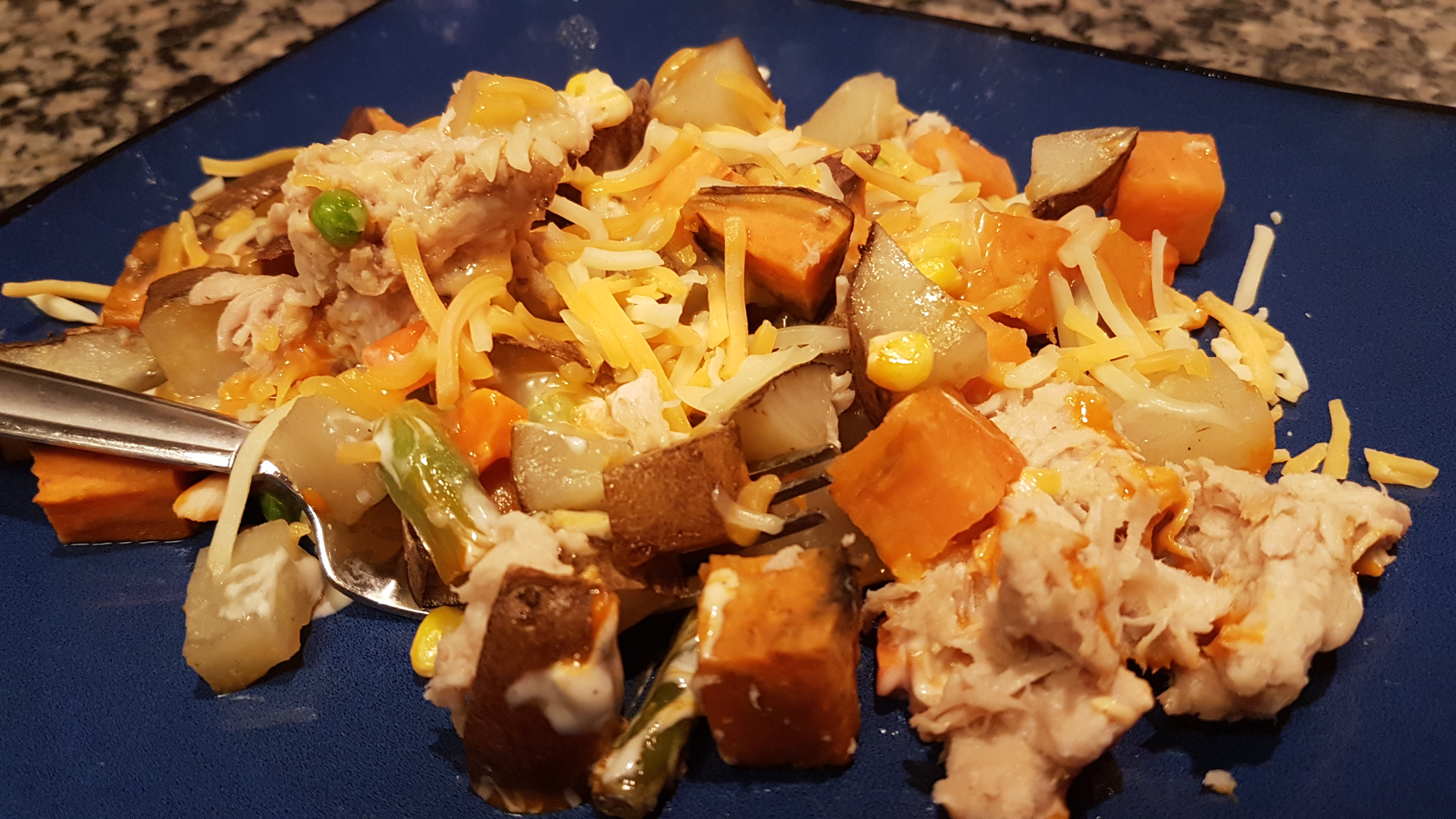 Snack – blueberries and a Sesame bite from Puerto Rico! 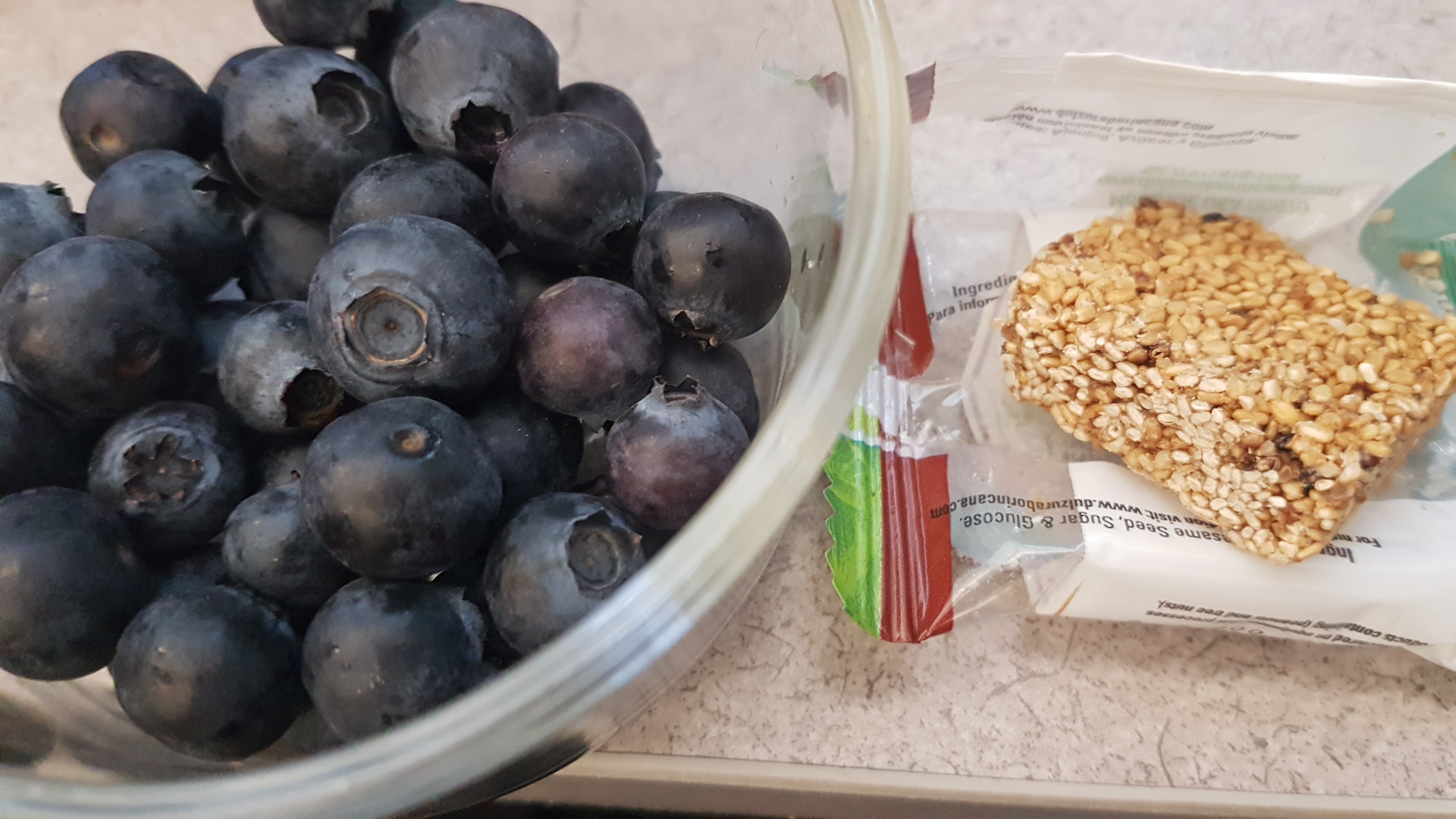 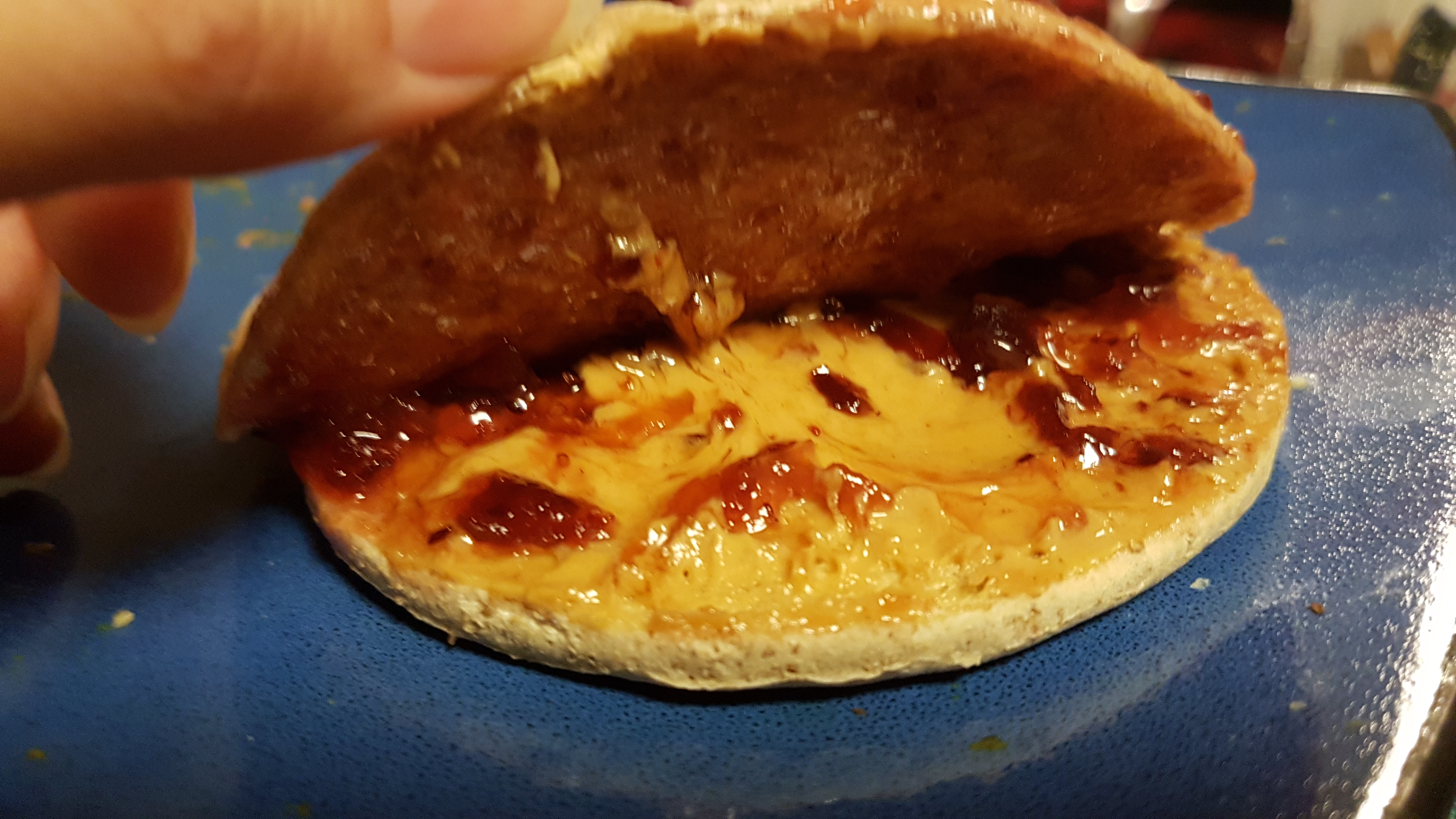 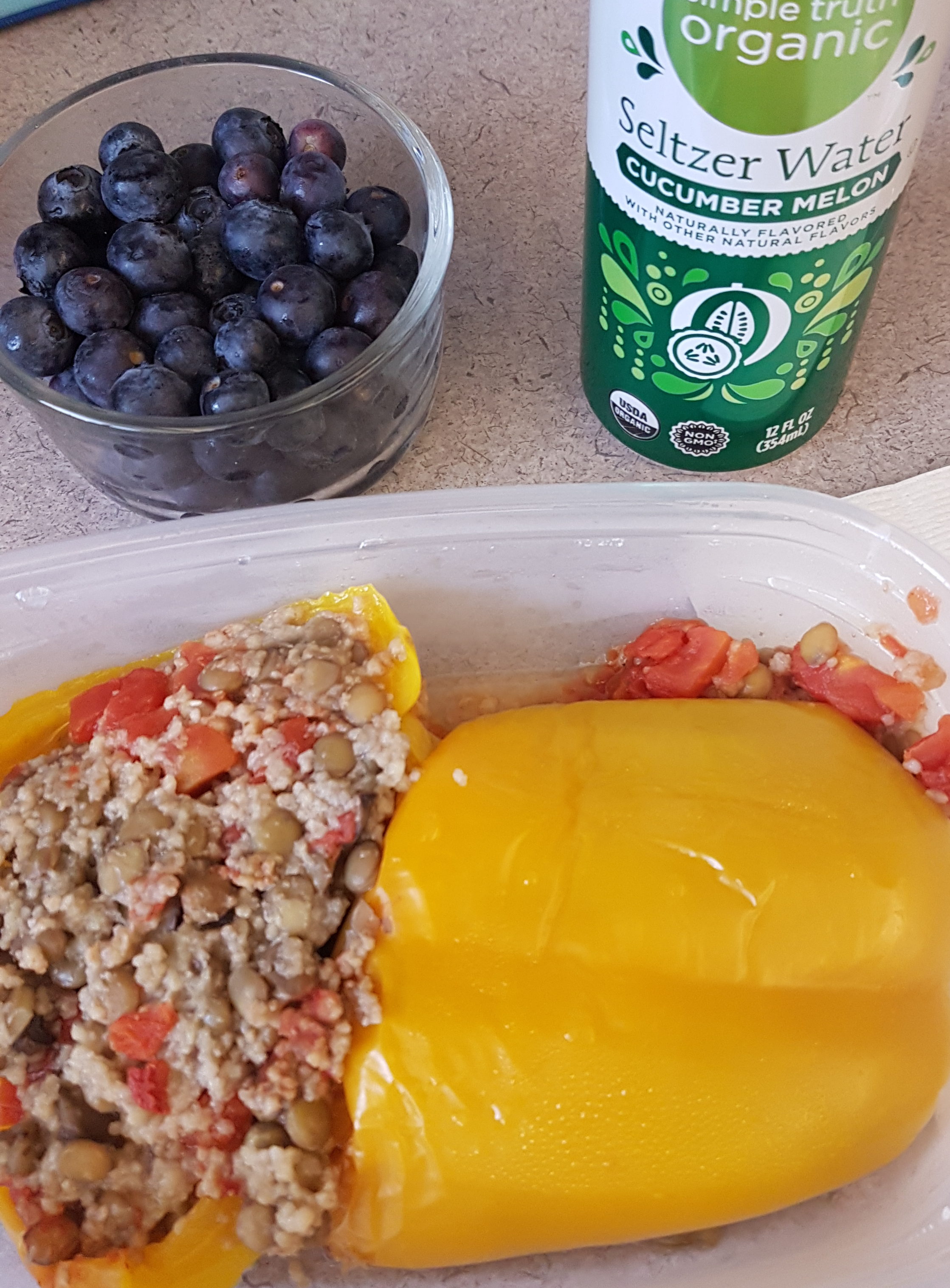 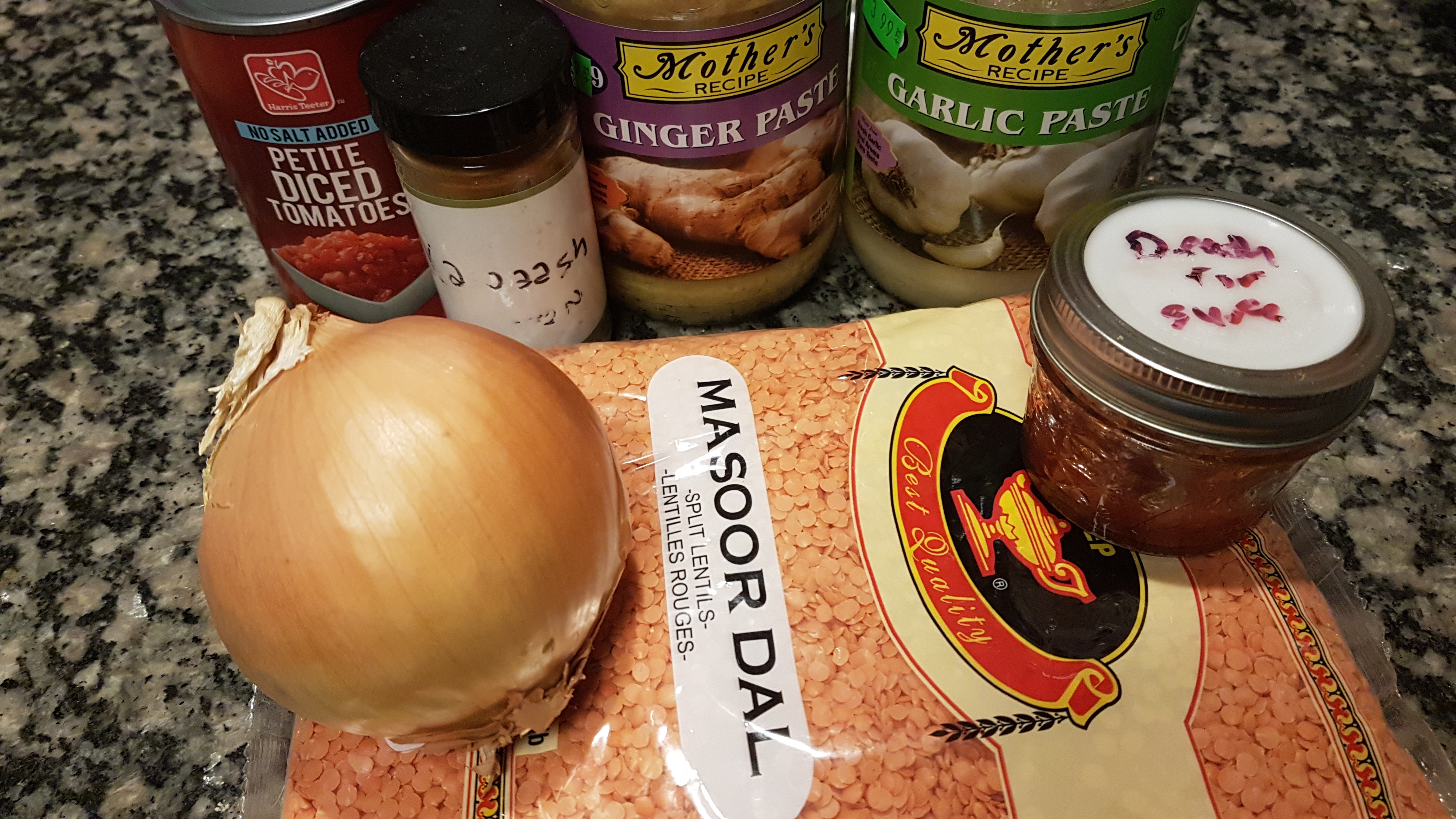 I want to cook more ethnic dishes this year, so I’m easing into it with a super simple dish. Lentils are insanely good for you, and insanely cheap too. Plus all the spices in typical curry are also highly rated on the health-o-meter. 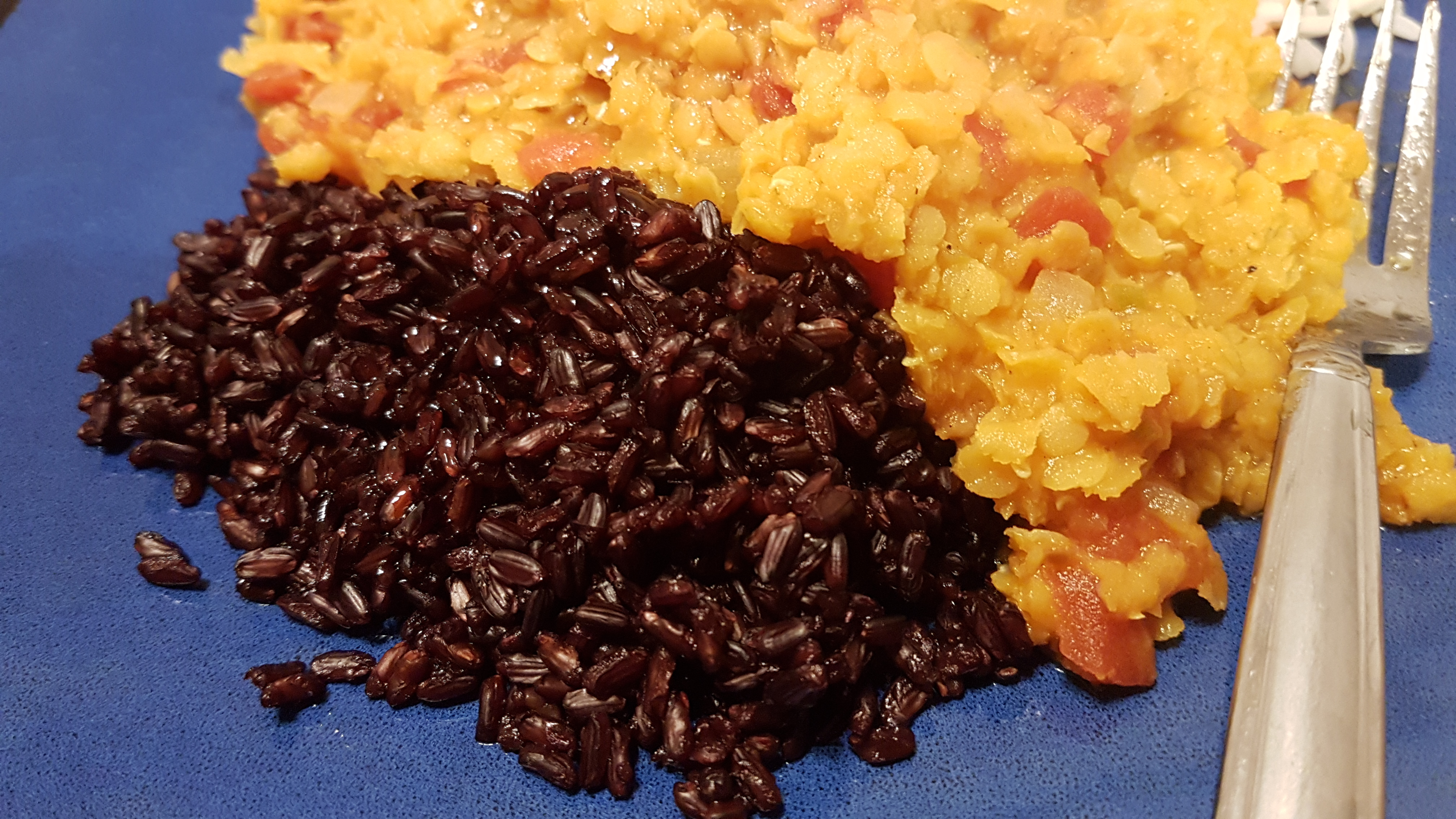 Snack – Turmeric hummus and veggies. How could you not love the neon yellow color?!? I know I did. 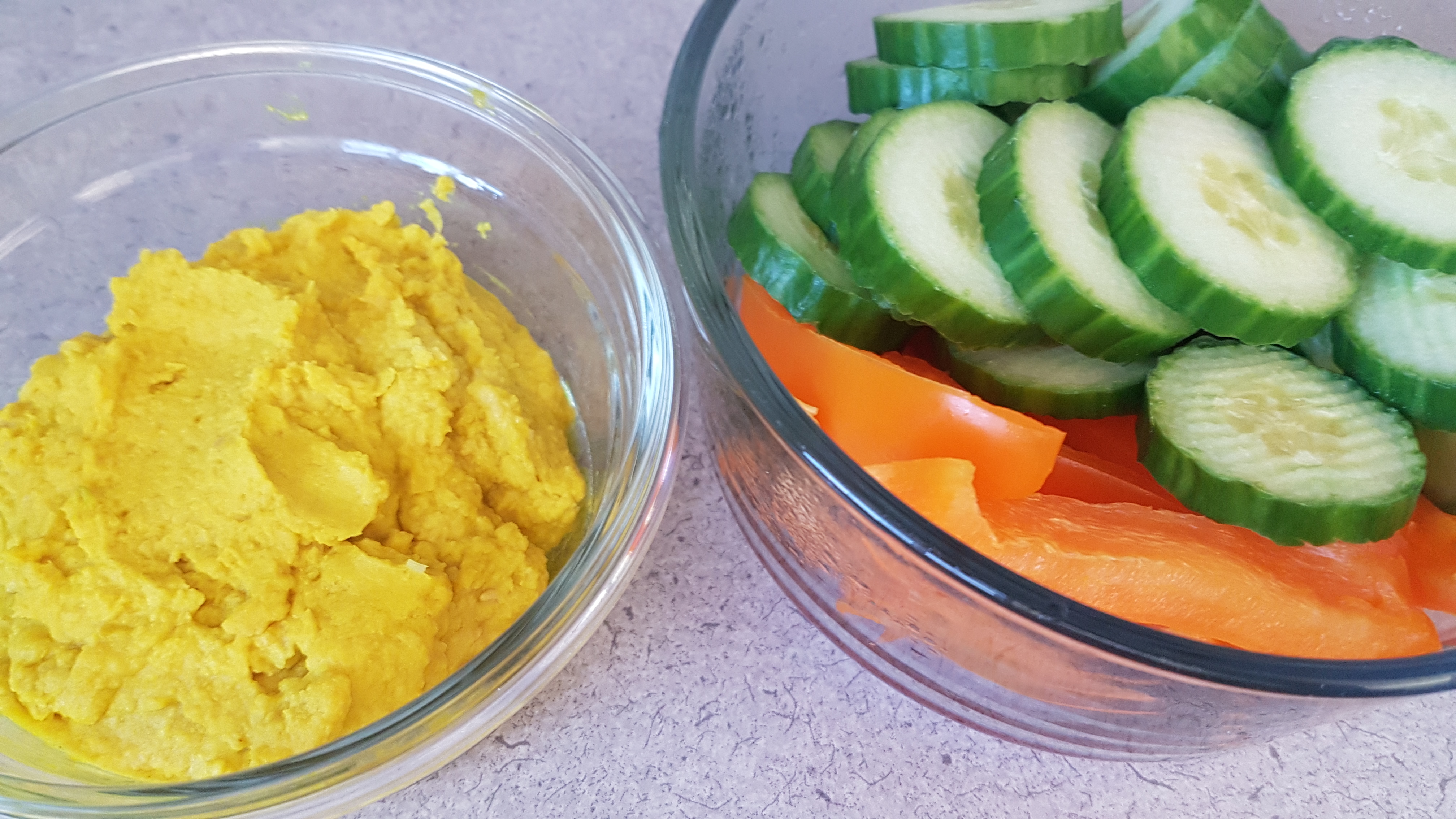 This is another chill weekend, as the boy is still not feeling 100%. I’m planning to head over to Spice Bazaar and pick up some more delish Indian foods and spices, and while I’m on that side of town I’ll hit the ALDI as well. We are running a little low on produce.

Eating healthfully does not have to be expensive!

Meal prepping is such a great time saver! I enjoy cooking too much to make enough for lunches and dinners, I would get bored quickly. But for lunches, it is really nice to already have meal options cooked and packed and ready to go, you just grab the container you want that day. Same thing for healthy snacks.