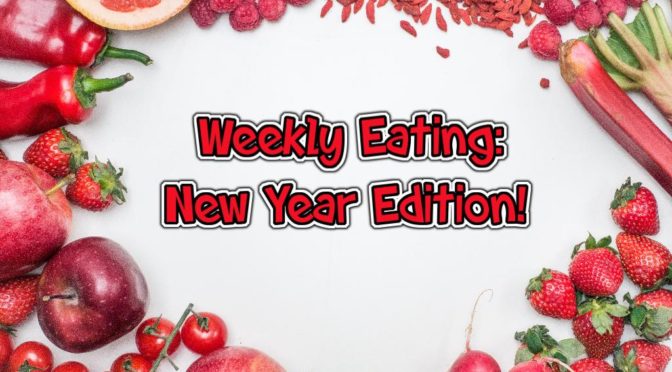 Welcome to the first Weekly Eating of 2018! This series got a bit off track back when I decided to tackle my Holiday Weight Loss Plan for a Christmas/double 30th Birthday/NYE cruise. My eating got pretty boring for a few weeks. (Though, maybe that’s a thing readers want to know? Shoot me an email or leave a comment if you’d actually be interested in that).

For those of you who are used to being on the edge of your seats every Sunday morning, just waiting to drool over the BE family week of goodies, despair no longer, it’s back! There will be some twists this year though. As most people make “eat better” new year resolutions, the BE family will be tackling a big one:

*collective gasp from the audience*

But WHY?! You might think. What about all the flank steak, BBQ pulled pork sandwiches, and bacon wrapped pork roasts? Won’t you develop anemia and deficiencies and die without eating 300 grams of proteins in the form of cooked animal muscles at every meal??

Well, dear readers. Let me first assure you that these are all quite common myths. There are some legitimate nutritional concerns to be aware of, such as getting enough vitamin B12. But on the whole, even a fully vegan diet can supply more than enough protein, vitamin and nutrients for an Olympic pro athlete.

My in-laws got me a book for Christmas which I’ve been desperate to read for some time: How Not To Die. It is a compilation of all the food science and nutrition articles, and what we know about the links between food and disease. And I’ve devoured it cover to cover in under a week. (My husband is not thrilled.) Between that book, Forks Over Knives and a bazillion other blogs, books, movies, and resources, I can fight it no longer.

Science says: to avoid, alleviate, and even reverse disease, it’s super simple: Eat plants. All of them. All the time.

So, that is what I intend to do. I rather like living, and particularly enjoy my hubs being alive too. (Sometimes he hates that I try so hard to keep him around). Unlike myself, who loves a good steak, but wouldn’t die without it, he really does love meat and might die without it in his diet. And he is allergic to vegetables*.
*not really, he just says that so he doesn’t have to eat them

A happy marriage is all about compromise, so to avoid the all-out war and depression announcing we are now vegan would cause, we settled on a bargain. 80% vegetables, 20% meat/dairy. I think we can both live with that, and live with it a whole lot longer to boot! 😉

Without further ado, here’s our first week of the New Year’s meals:

Breakfast – A fun souvenir from traveling is coming down with a cold! I spent the first few days of the new year sniffling and coughing and generally feeling suuuuuuuuper exhausted. I was too tired to bother with actual breakfast, plus we slept in a bit. (We also went to bed by 10:30pm on NYE, woooooo 30s!)

Lunch – Didn’t have the energy to make real food yet, plus the fridge was wicked empty from cleaning it out before traveling. So I just pulled a bag of mixed veg and a frozen bag of beans & rice from the freezer, boiled it together, and called it soup!

Dinner –I did manage to pull a pork roast from the freezer and soak some black eyed peas overnight, so that I could produce the required New Year meal of pork, sauerkraut, greens & black eyed peas. We definitely want luck and prosperity in 2018, so I made sure we had peas & pig for luck, and collard greens & sauerkraut for money. I added just a tiny bit of pork to flavor the greens, and the rest of the roast was just ‘around’ for whenever hubs needed meat.

I got a bit of an energy boost once the DayQuil kicked in, so I meal prepped for the week a bit by batch roasting a bunch of veggies and cooking a big slow cooker full of black beans. They will become lunches, black bean soup, and possibly black bean hummus.

Breakfast – smoothie with banana, blueberries, and some spinach thrown in for greens

Dinner –Falafel balls served over rice with mushroom gravy. They were delish, though not quite the flavor I was looking for. I will keep playing with the recipe until I get it right, and then I’ll share it here.

Snack – RUM CAKE! Erin from ReachingForFI.com and I did a little holiday swap, my famous Cracker Cookies for her famous Rum Cake, and boy was it tasty! Sweet but not too sweet, with just enough rum to know it was there. It’s a good thing it was a small size cake, because I’d eat a whole one without a second thought. 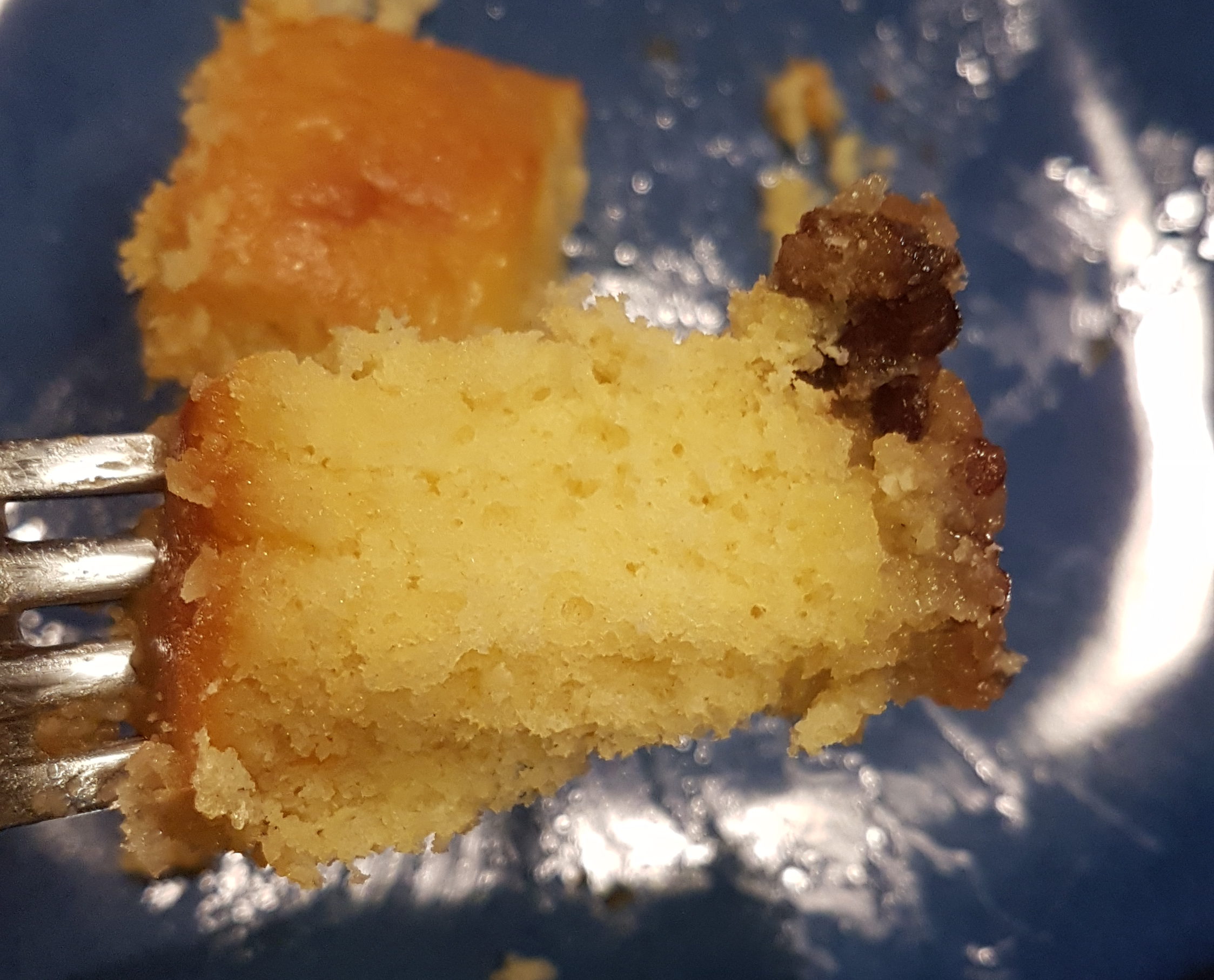 Lunch – Leftover black eyed peas & collards with sauerkraut & a salad with radish sprouts. The greens and peas had a creamy earthy flavor, which was complimented beautifully by the salty tang of the sauerkraut. Plus, since I made it using red cabbage, it was such a lovely bright pink color! I’d eat this on the regular for sure. 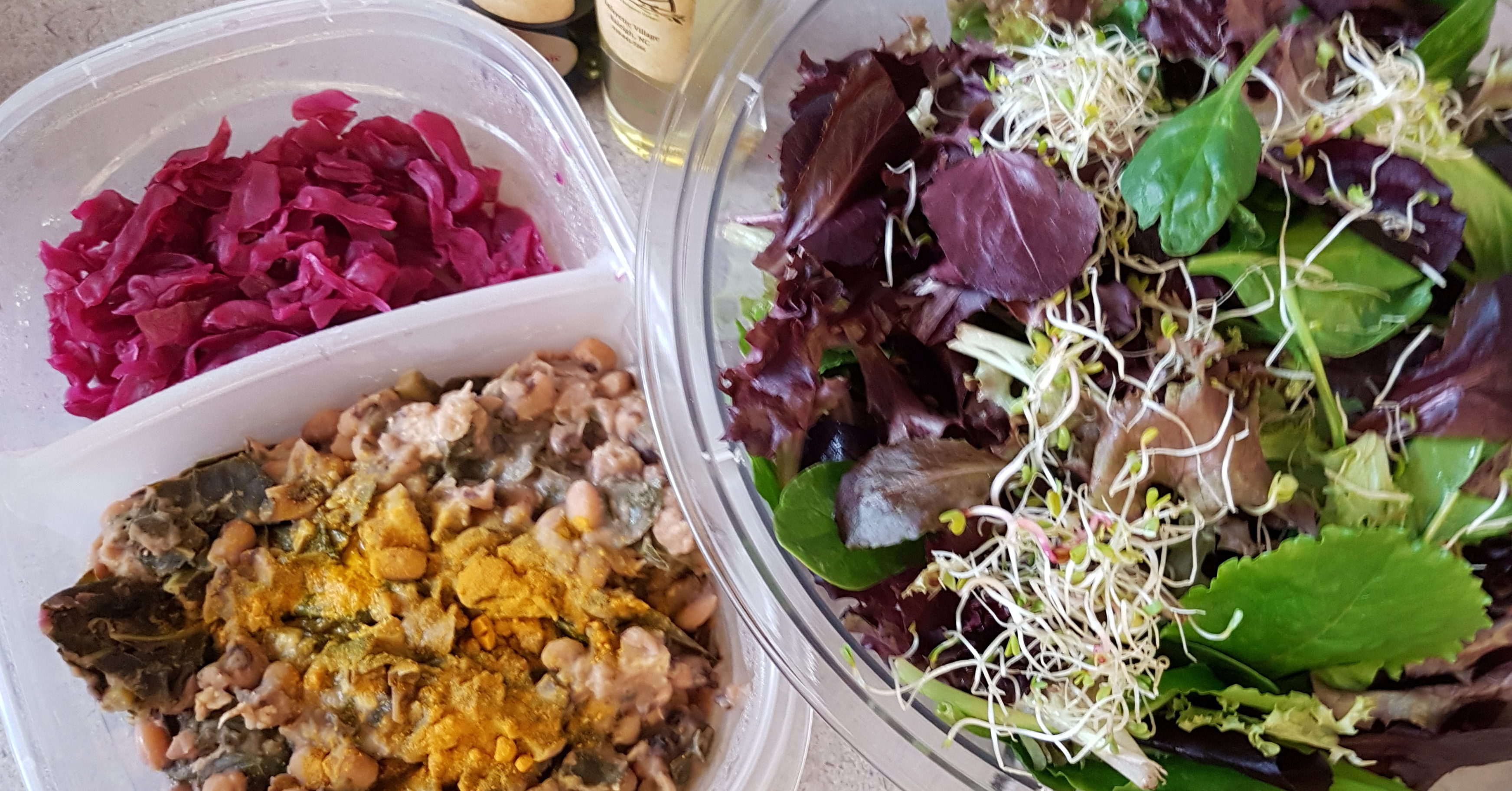 Breakfast – I wanted oatmeal with strawberries and goji berries, but we evidently had some pantry moths. Those little #&@*ers ruined a whole bag of dried goji berries. >:( So I ended up with chocolate maca peanut butter instead, which I managed a few bites of before my stomach was like “nope, you’re done.”

Lunch – I made a big batch of my best black bean soup with the crock pot black beans, and this was an awesome comfort meal on a cold day when also feeling sick. Quite filling too.

Dinner – Mushroom risotto with collard greens. I had a pint of mushrooms and another head of collards still left from NYE that needed to be used up. I also had some barley from the Indian spice store (more below), so naturally I was thinking risotto.

I found this recipe from Williams-Sonoma, and of course adapted it to what I had on hand. It turned out pretty tasty, but be warned, it makes a LOT of food! We each had 2 bowls and there is plenty left for at least another 3 lunches.

Breakfast – I did my trick of putting jam in my yogurt to make natural fruit-on-the-bottom, and topped it with my homemade tropical granola. Delightful! 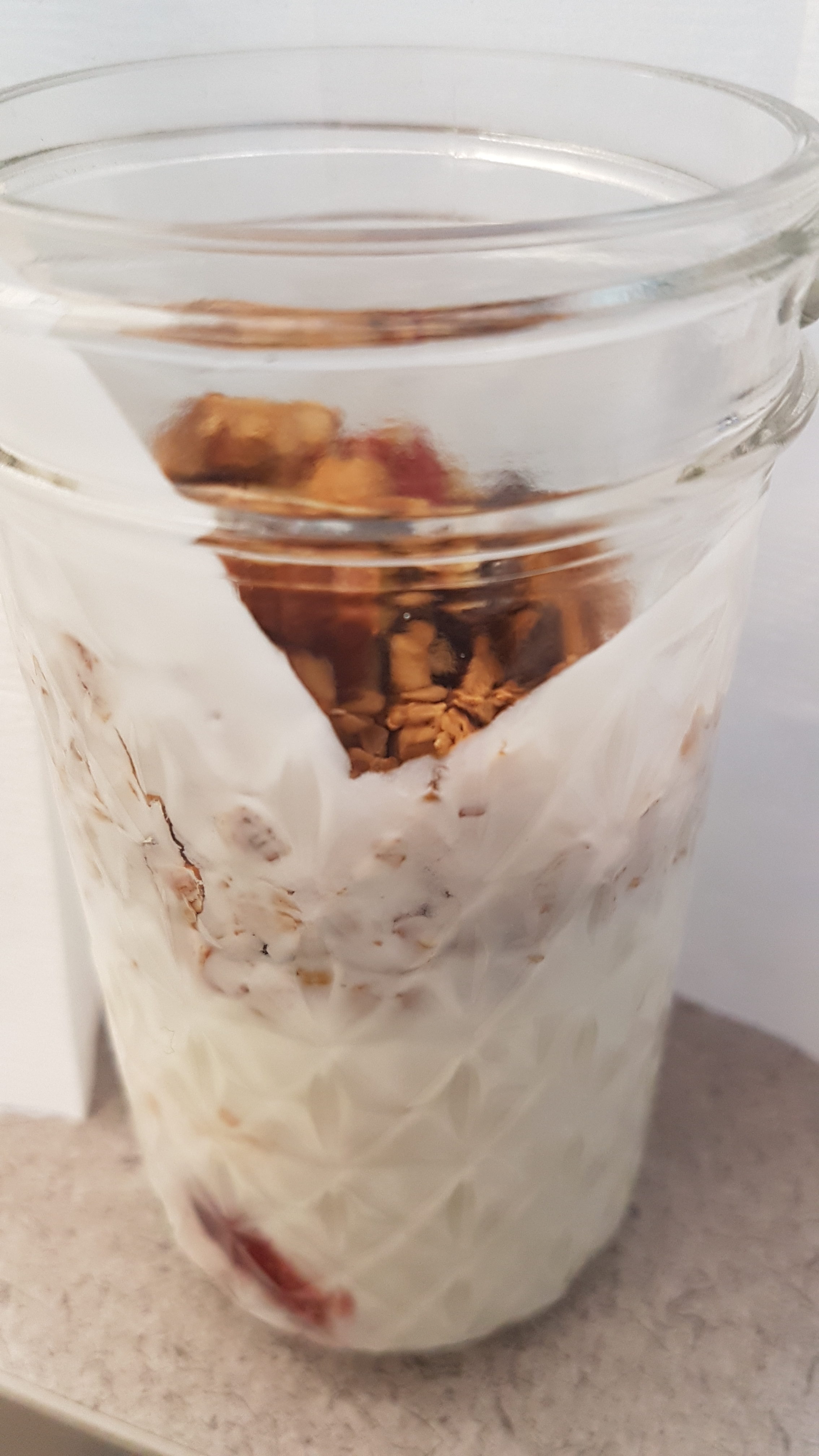 Lunch – Black beans & rice with salsa and a small sweet potato. I added turmeric to the beans, and cinnamon & ginger to the sweet potato for extra antioxidant power.

Dinner – Oh my goodness, so many leftovers!

Snack – A friend at work went home to S. America over break, and brought back fancy chocolates to share. I enjoyed her generosity with a blueberry chocolate bar.

This weekend will be low key since we are both recovering from traveling and being sick. I am searching for tofu & tempeh recipes that will convince the boy that plant based eating isn’t the worst thing in the world. Give me a shout if you’ve any to share! I’ve found several BBQ recipes I’d like to try, so there will probably be some experimentation going on in the kitchen.

We are out of frozen berries, so a grocery run is in order to procure that and some soy or almond milk. Also Kroger is running a 1 day only $0.99 sale on cheese… is it worth it? So torn… I want to cut down on dairy but also burritos are hubs’ source of strength in this world, and that’s a really great price point…

My first adventure of the new year was to visit an Indian grocery nearby to check out the goods. Many cultures around the world have thrived on a plant based diet for centuries, so I assume they know how to do it right. I plan to cook many more Asian, Indian, Ethiopian, Latin American, etc. dishes this year.

I spent $62.61 there, and for the money I got a total bounty! Plant based eating can be super cheap, y’all. The haul included: shredded coconut, soya wadi, sesame seeds, ginger & garlic paste, 3 types of lentils at 2lbs each, barley, bulgur, tahini, golden raisins, turmeric, beets, cloves, and Amla powder. Not a single thing cost more than $5. I would highly recommend checking out an ethnic grocery near you for cheap staples like grains, beans, rice, and spices. 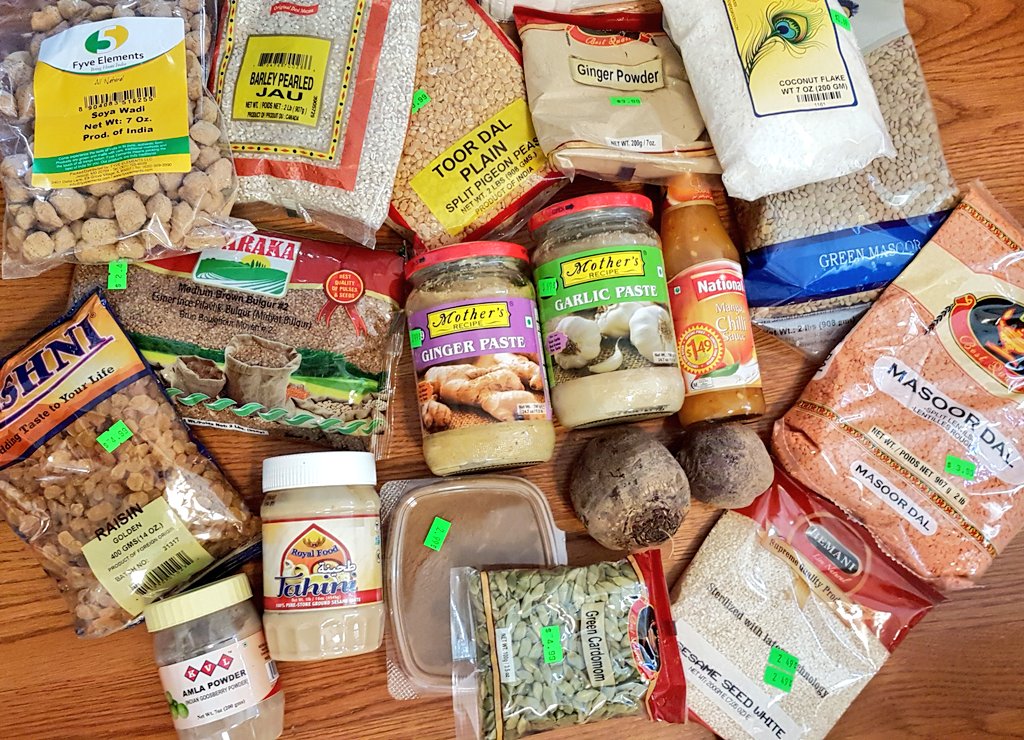 The rest of the grocery shopping was from Harris Teeter, where I stocked up on tons of produce and other healthy staples. They had a surprise sale on tofu and tempeh, which is perfect timing. I also snagged Black Rice at a cheaper price than Amazon offers, along with crazy-cheap canned beans & tomato (4/$1!!). That should be enough produce to last us quite a long time, though I will still have to restock the things that spoil (like greens/spinach, frozen berries, almond/soy milk, bananas) weekly.

So I did basically double my target grocery goal, but I’m hoping that now I am pretty much set for all of January. Except for occasional re-stocks of fresh and frozen produce, yogurt for the boy, and nut milks, we should not need groceries for a very long time. We will see how that plays out in real life. I’m a notorious menace in the “mark down” aisle of a grocery store.

Also, an initiative I’m taking on for this year is to purchase at least one grocery item every week to donate to a food pantry. It blows my mind and completely saddens me how many people in our country do not know where their next meal is coming from. Especially when I am so blessed and spend 70% of my waking hours thinking about food and recipes and meal plans.

Given the hullabaloo of the #BombCyclone this past week, did you even think what impact that has on children and families that depend on free or reduced meals at school to make their weekly budgets work? After much research, I think Urban Ministries of Durham will be the place to which I donate. And hopefully, I will even get to go cook and serve some meals there at some point.