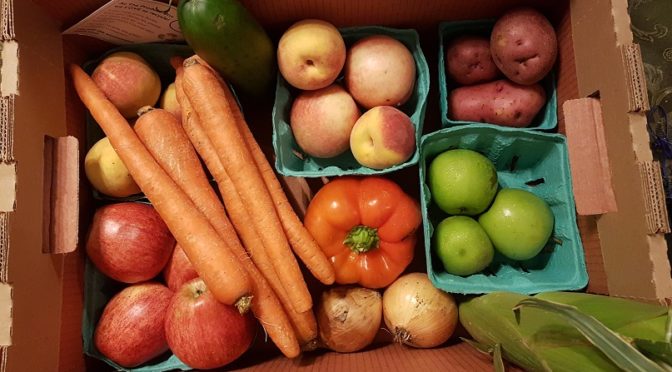 Whoa buddy, what a crazy few weeks! Just as we were recovering from the hurricane of Brofest, where 6 grown men lived in my 3 bedroom house for a week and I fed them all, actual hurricane Florence blew into town, on the eve of my brother’s wedding!

On Sunday, we finally had a quiet, empty house. We did I don’t remember how many loads of laundry, and not much else. The plan was to spend Monday and Tuesday figuring out a cleaning service to deep clean, before flying to Ohio on Friday for the wedding. Well, turned out we spent Monday and Tuesday totally rearranging our plans, and driving to Ohio!

We got the travel alerts on Tuesday morning saying flights were very likely to be cancelled, and there were no penalties for rescheduling or cancelling flights if we did so now. So we talked it out quickly over email and a phone chat, and decided to take advantage of that deal.

I was quite proud of myself over the weekend for making a really nice travel lunch for myself, since Tuesday’s are crazy days at work now. I also re-used the plastic packaging from the Starbuck’s I ended up buying last Tuesday due to craziness, which eases my guilt just a little bit. 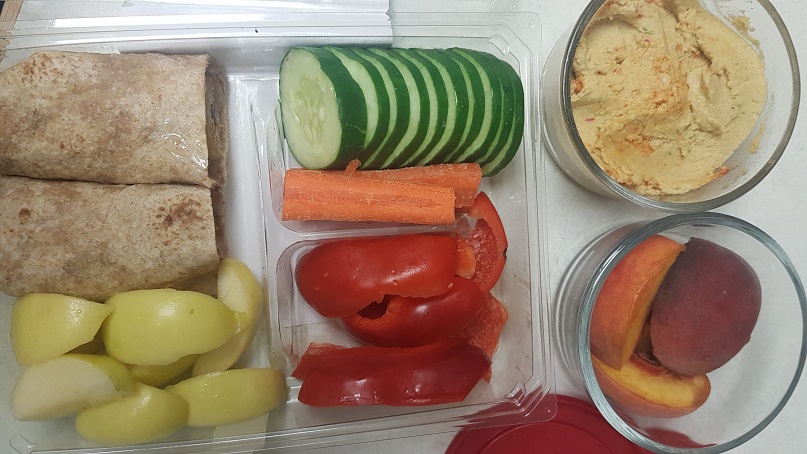 Then we also had our planned puppy sitter back out at the last minute, which worked because we were now forced to drive rather than fly. Now the pups could come with! So we were resigned to doing the drive we swore we’d never do again. In looking ahead at the weather, and the fact that many things were already closing or preparing to close by Wednesday, we made the call to just get the F outta dodge.

I’m very lucky my workplace was supportive of anyone who wanted to ‘evacuate’ and we could choose to work from home. Hubs already works remotely, so as long as we had internet we could still get things done and get a paycheck.

This was my first experience firsthand of how people react to impending disaster. I kid you not when I say that I had to go to three gas stations on Tuesday before I found one that still had gas. And it was completely out of regular, I had to buy premium at $2.99/gallon at that. After waiting in line for like 15 minutes. 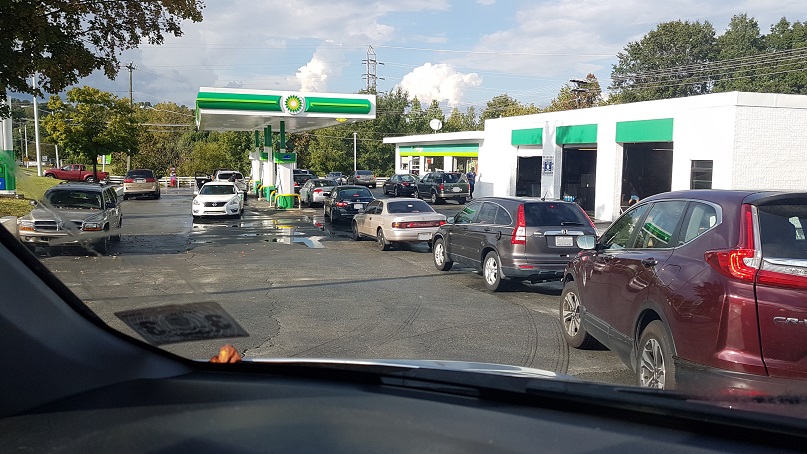 There were lines to get into the ABC store parking lot (the only places in the state to buy liquor. People have their priorities straight…).

A friend I called said they had already gone to 4 grocery stores in the area and no one had any water left. The storm was planned to hit on Friday night. This was Tuesday at 4pm.

I got home to a madhouse of activity. Washer, dryer, and dish washer are going. There are still piles of random things all over the house, the refrigetrator needed gone through to freeze or toss anything perishable, and on top of it all we are now frantically packing to run away from a hurricane and into a wedding weekend that just got unexpectedly doubled in length.

We threw a bunch of things in bags, hustled it all out to the car, and hit the road by 7.

The drive was fine at first but we started getting a little worn out by 10. We had on and off rain, with a good hour of intense downpour on a windy country road, and plenty of traffic. By 11, we decided that stopping around midnight to rest might be a good call, and finish the drive early in the a.m. in time to log in to work.

Second: all booked. Third: no rooms.

No rooms at the inns.

All the way through West Virginia, and Virginia, and by the time we got to the Ohio border we only had 2 more hours left to go, it was 1 am, and we said screw it let’s just get there.

Anywho, then we were finally in Ohio and beyond exhausted. I got almost 4 hours of sleep. I tried.

Luckily we stayed with my sister who is wonderful beyond belief. We both managed to get actual work done, but didn’t really get off the couch all day. I did buy some groceries to fill her pantry and cooked a nice dinner of Bayou Chicken Pasta for them to say thank you. 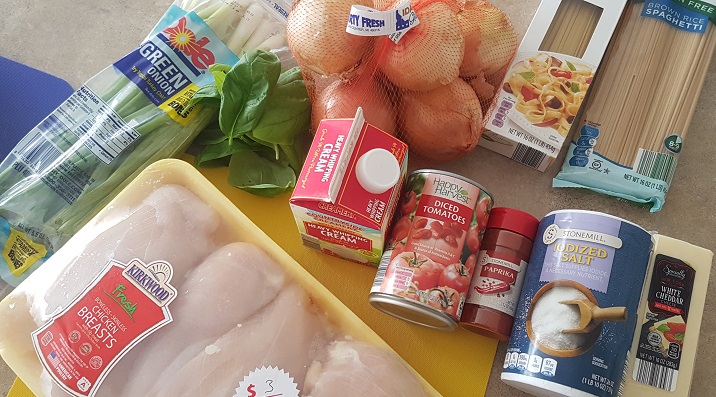 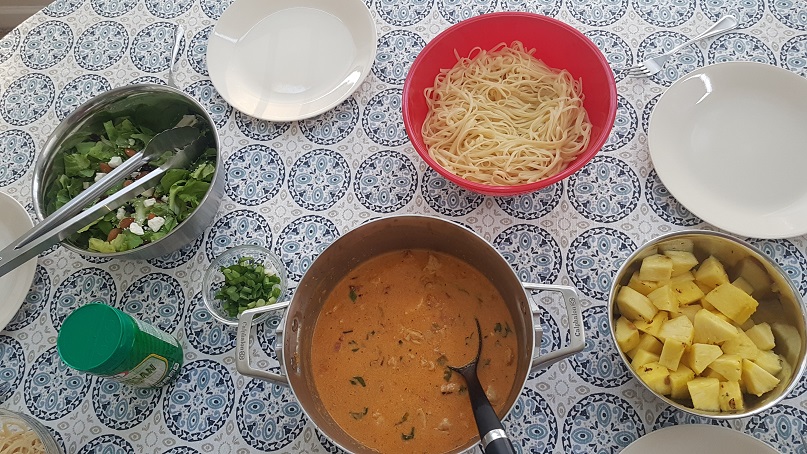 Thursday we were a little more refreshed after a full night’s sleep. We decided to finish the 3-more-hours drive to my parent’s place where we were staying for wedding weekend because we had taken Friday off. I wanted to show hubs a little of my hometown, and it would be nice to sleep in and already be there to start the day.

Before we left, I cooked a 100% vegan meal to balance out the dairy and carb heavy dinner from yesterday 🙂 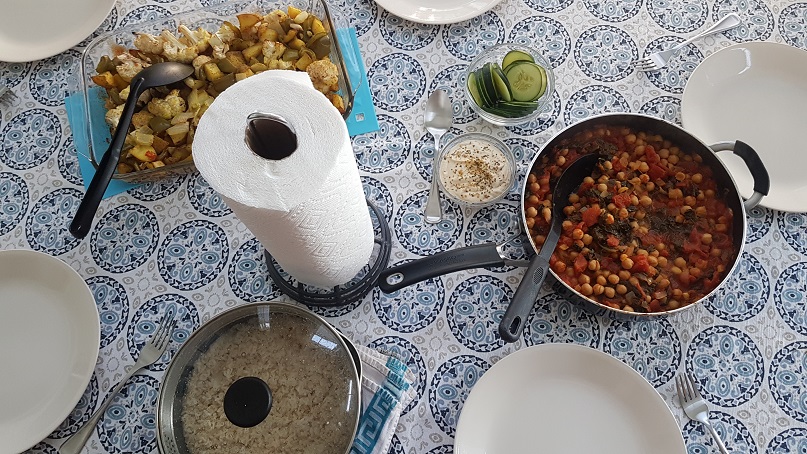 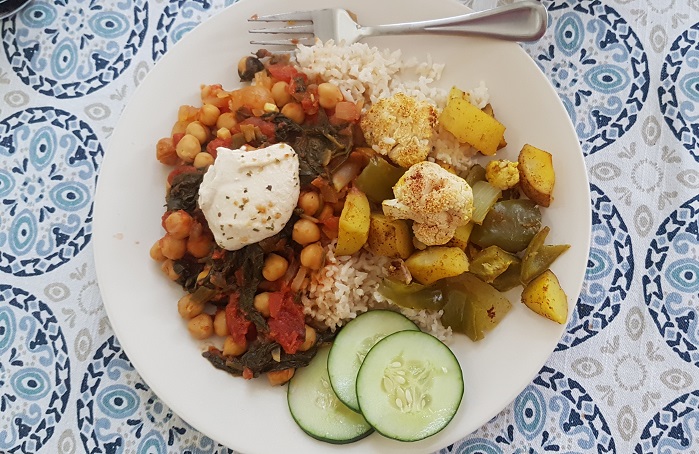 Friday I took the boy to Mill Creek Park, a gem in the middle of Youngstown. It was approved in 1891, and covers over 4400 acres of hiking and biking trails, ponds and streams and waterfalls, and gorgeous greenery. 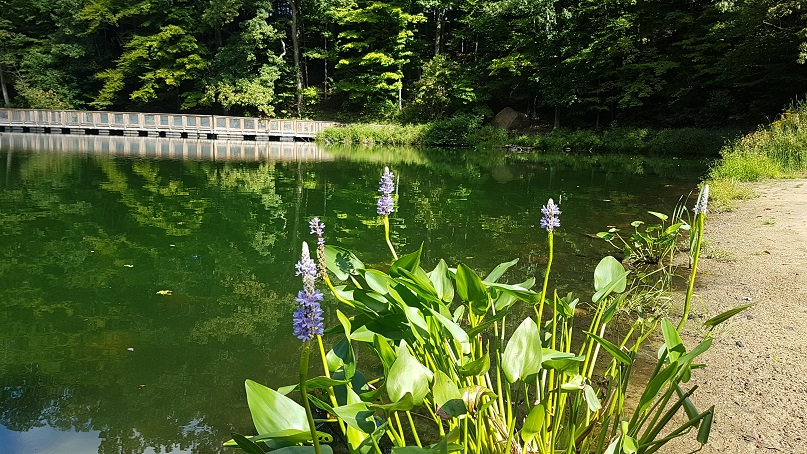 We had lunch at Fellows Riverside Garden cafe, overlooking the lake. It was lovely, and their bagel & lox was divine. 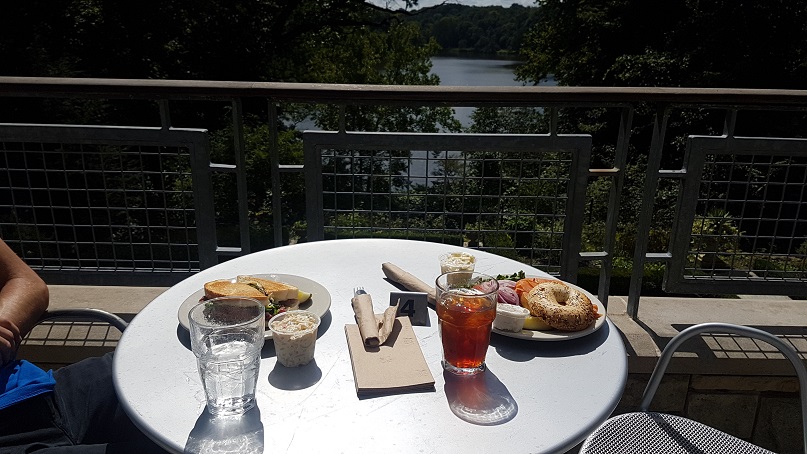 My parents took us out Friday to a vegetarian place that they have repeatedly raved about called the Courthouse Inn & Restaurant. It’s by a couple who live (lived?) in NYC and have a very… unique sense of style. I can’t say I didn’t like it though. And the food was divine. The cauliflower legit tasted like wings, they had the best red wine I’ve ever tasted, and the sweet and spice sauce was delish. The stir fry over forbidden black rice was everything I wanted. And the carrot cake for dessert! Oh mama. 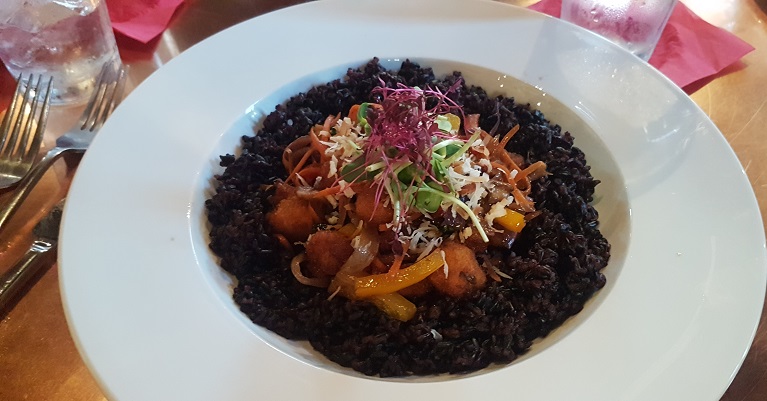 We also got to try a flight of wine at a local winery Sundog Cellars.

At my parent’s, it was pretty much just scavenge and find things to eat. But among the many meals that were “on the house”, so to speak, were the amazing rehearsal dinner that included a 16 oz ribeye steak and the cutest dirt cake of all time (the theme was fishing, because deep sea fishing is the couple’s favorite thing to do) 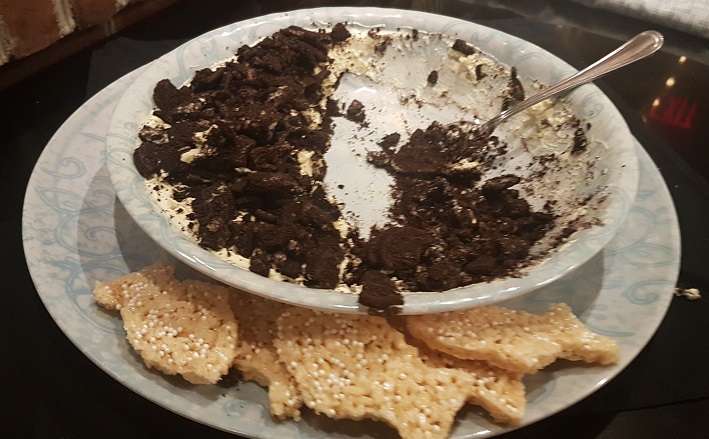 and the wedding buffet itself was BBQ put on by Barry Dyngles, “Authentic Southern BBQ” lol. It was all good, but the brisket! Outta this world. I wish I’d had thirds. 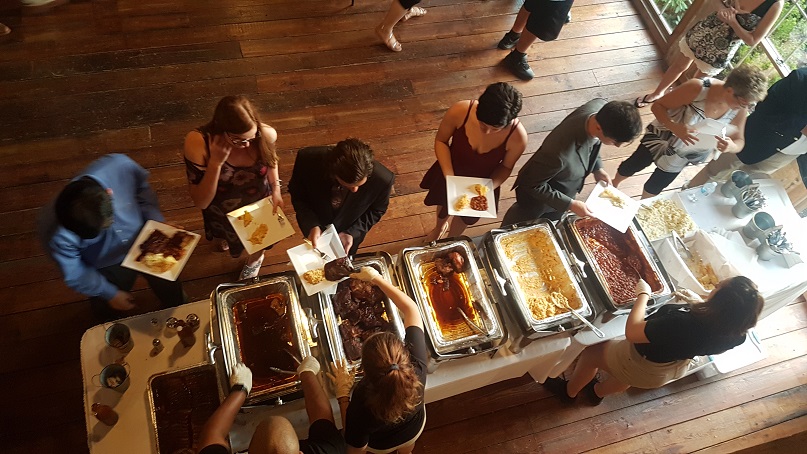 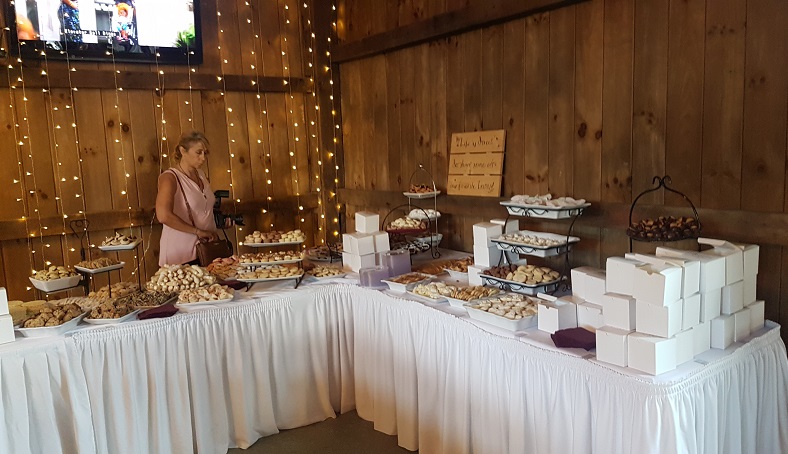 On the road, I had snagged a few sandwiches from a platter that were left over, so we just snacked and drank coffee. It was worrisome seeing all the signs reporting roads closed and to “limit travel in North Carolina”. Evidently there was a tornado and also flash flooding Monday morning!

But it was all fine, and we made it home safely. The boy and I had very different ideas of what qualifies as “comfort food” when we got home haha: Supreme frozen pizza, vs all the veggies stir fry.

The rest of the week was a bit of a blur, with oatmeal frequently the breakfast of choice since it’s easy and I had some peaches to use up in the refrigerator. 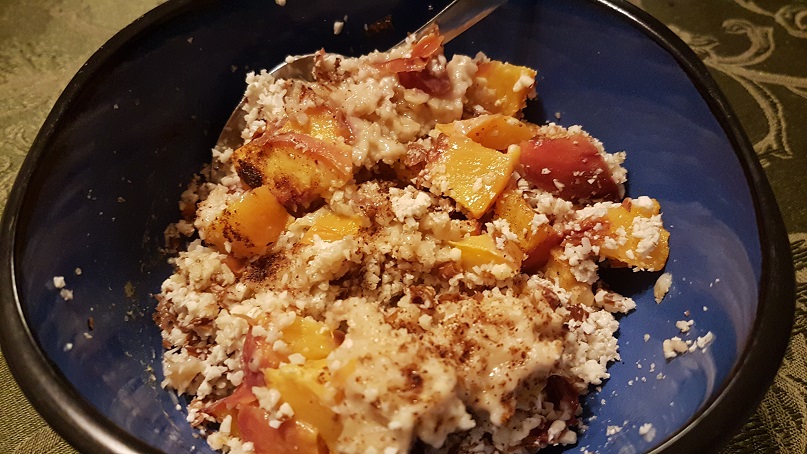 Wednesday the boy wanted to get creative and cook together, so we decided to have a make-your-own-sushi night. He got the rice started and thawed some seaweed salad, salmon & shrimp and when I got home I pulled out the nori sheets and we had fun mixing and matching and rolling. 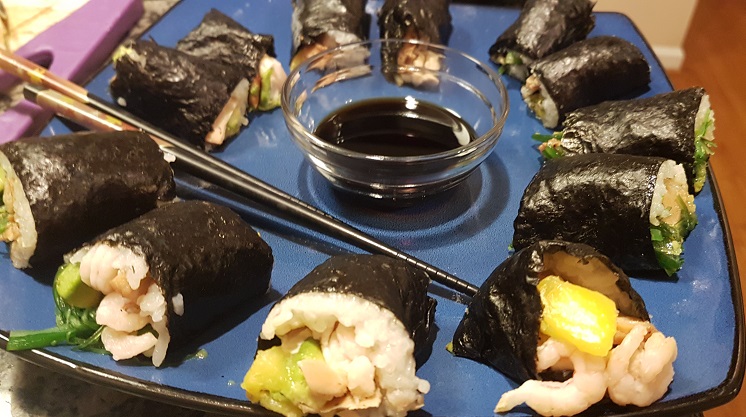 It provided about 10 rolls total, which was plenty for dinner and lunch the next day for me too. 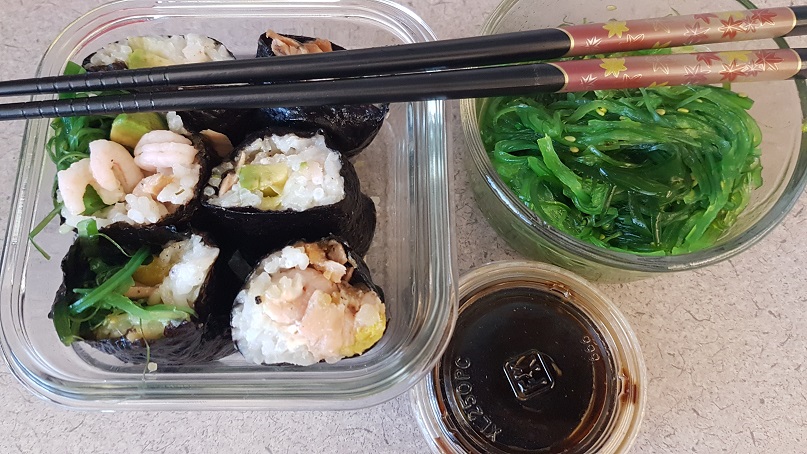 Since I was on an Asian food kick, I also whipped up some quick  soup for lunch the next day with miso, veg broth, cilantro, hot red peppers, and enoki mushrooms. I ate that with the rest of the seaweed salad. 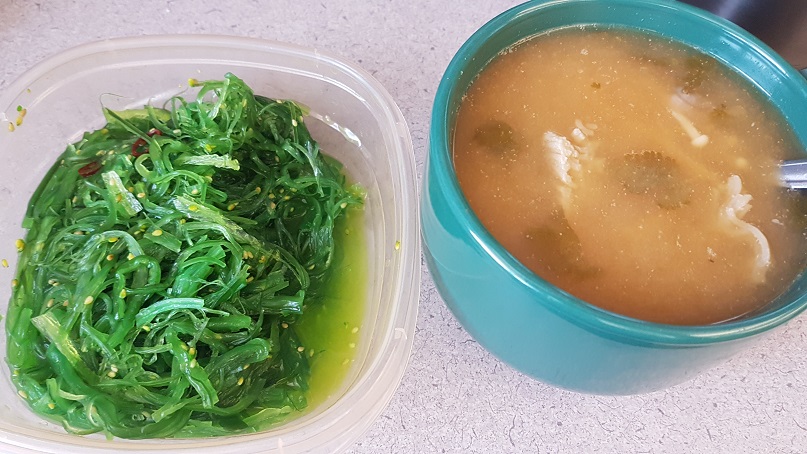 And of course on Thursday I went to the Durham Co-op dinner, which was sausage and peppers and onions. I met up with some friends, and met some new ones. I also got some cans of pumpkin pie filling on sale for an idea I have for next week’s Food Swap items… 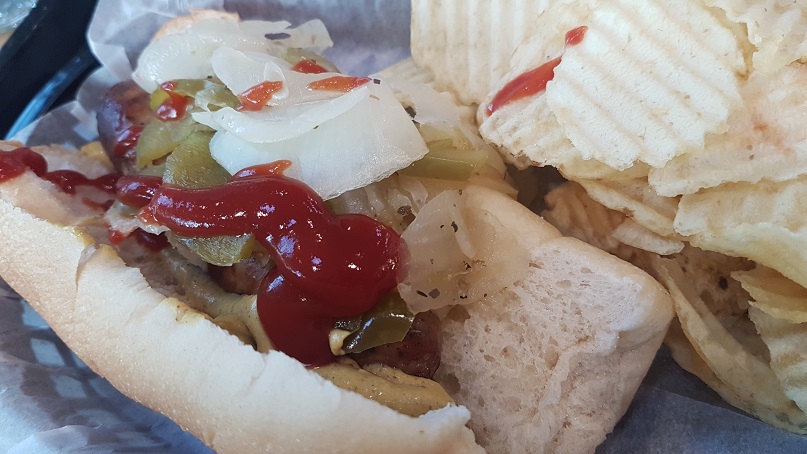 And finally we ran out of almond milk, so I soaked some almonds overnight and made my first batch of homemade almond milk! So easy and so delicious. I think I’m going to try making my own more often so I can stop buying the plastic lined boxes. Plus you can customize the taste a little too, with salt, sugar, or vanilla. I need to find something to bake with the pulp now.

Food Total: uhhh, way too much

I usually keep travel and “entertainment” and groceries separate, but this trip kind of smushed everything together. We had some meals at my parents house (which obviously we didn’t pay for) and a lot of meals out provided (for rehearsal dinner and the actual wedding) but we also went out a few times, and I bought groceries twice for my sister to thank her for letting us stay with them.

Plus there’s the several coffees and sports drinks along the way to keep us awake and happy for ~20 hours in a car that I consider worth the cost in exchange for not dying or fighting.

Sometimes life can throw you curves. No matter how much you plan or think you’re ready, you just never know. We had to totally overhaul our plans and roll with it when the hurricane came to town. Luckily we were refunded for the flights, or this would be a very expensive surprise. As it stands, we did the best we could with limited time. Much of what was in the fridge could be frozen, so we didn’t waste too much. And yes we spent more than we likely would have otherwise, but life happens.