This was an overall quiet week, but it felt like it went by so fast. That’s one of the things I hate the most about getting older, time just keeps speeding up! When you’re 16 you can’t wait for 18, then you can’t wait for 21, then 25, then what? You blink and you’re 30, just knocking on the door of 40.

We did get to enjoy a work-hard-play-hard Saturday, in which we (meaning the boy) did a ton of yard work, and also (me) sat in a hammock and read a book for an hour. The boy chopped down a few more smaller trees, which we didn’t need taken down by the pros with the big guys. Now the yard is SO huge and open feeling and I love it! There are just enough trees left to hang a hammock.

Even with a couple plants lost to disease because of all the rain, the garden itself is looking green, with the sweet potato vines out of control all over the place, several enormous green tomatoes coming along (I got a late start planting this year), beans nearly done, and the cantaloupe/ melon getting bigger everyday. You can eat sweet potato leaves, they taste like spinach.

I harvested my first real edible, a lovely acorn squash! The big compost pile is doing it’s thing, and the compost bin is nearly ready to be spread over the garden in the fall. My homestead dreams are coming true. Now to just convince him that we should get chickens…

And then on Sunday we went over a friends’ house for some grillin and chillin and pool time. I brought a big kale and chickpea salad and a rustic panzanella, and both were a big hit. I love that my friends are at least veggie friendly! I did indulge in a few bacon wrapped cheese stuffed jalapenos because, duh. And they were amazing. I did get a bruise from playing frisbee, which baffled the boy. He still gets surprised with how fra-gee-lay I am.

Lunch – leftover salads from the weekend, kale and chickpea and a panzanella with my homemade bread

Lunch – gazpacho: I took the panzanella from the weekend, which had gotten too soggy to eat, and added some water and olive oil and pureed it into a nice summer soup! Traditional gazpacho started as a bread and oil soup anyhow, the veggies got added in later over time. Turns out it’s not great cold though, I prefer it hot. 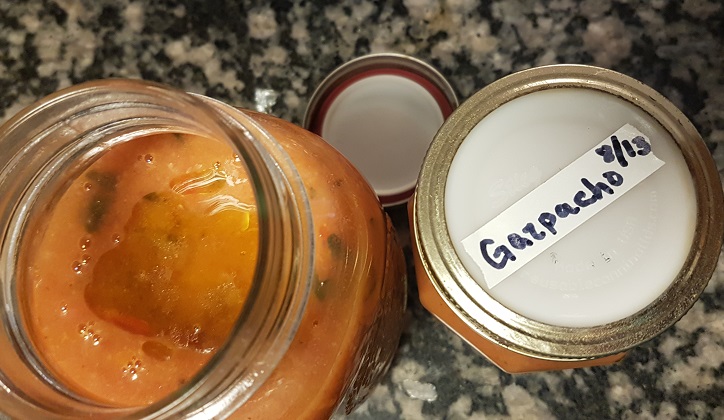 Dinner – Sweet potato chili with some homemade wheat rolls. I took the leftover loaded sweet potato from last week’s Co-op dinner (yeah they are huge, the size of your face, so I brought plenty home) and mashed it in a crock pot with an extra can of diced tomatoes and about 2 cups of pinto beans. It turned out pretty darn tasty and filling. The boy even liked it.

Breakfast – lentils with potato, zucchini, peppers, and mushrooms in a whole grain wrap. 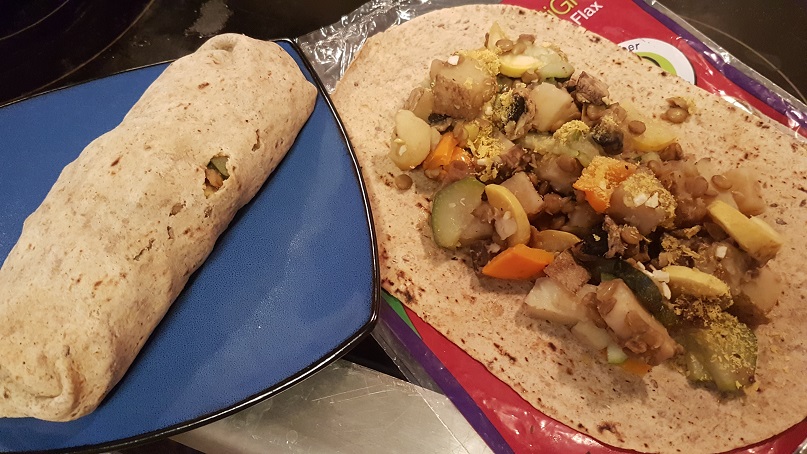 Lunch – red beans and rice with some salsa. I usually batch cook a bunch of one kind of bean each week, for use throughout the week. Then at some point, the beans really need used, and I’ll have them with some rice and salsa. It never disappoints.

I also stopped by a community garden on a lunchtime walk, and discovered a new thing: lipstick peppers! I thought the name was adorable, so I had to take one home. All the peppers were bumpin, so I grabbed a few kinds for salsas and sauces, along with some stevia leaves for afternoon tea.

Dinner – open-face balsamic and soy sauce marinated portobello sandwich with lettuce, purple sauerkraut, and pickles, and a cucumber/tomato side salad 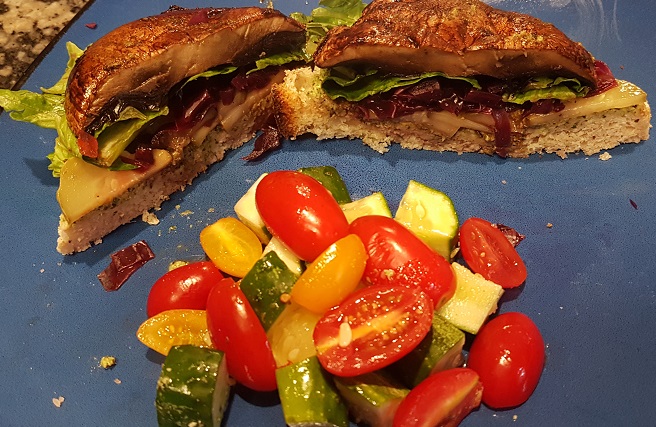 Breakfast – was feeling kinda nauseated, I think I just had some oatmeal and ginger tea

Lunch – leftover summer ratatouille &  a salad. I used a mandoline to thin slice some potatoes, zucchini, and squash, and layered it with tomatoes and bell peppers and baked at 350 for about an hour. So dang delicious! 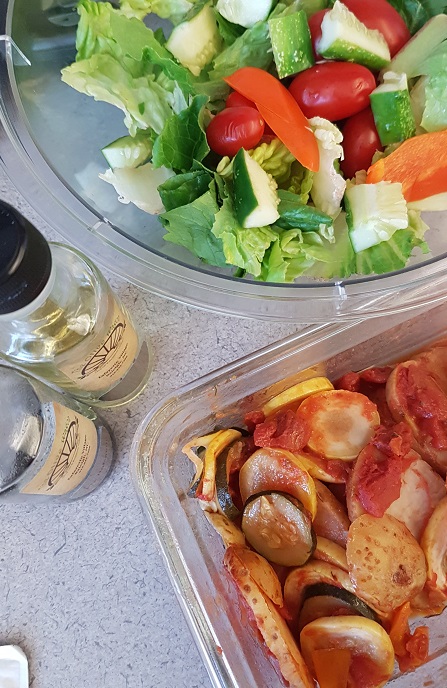 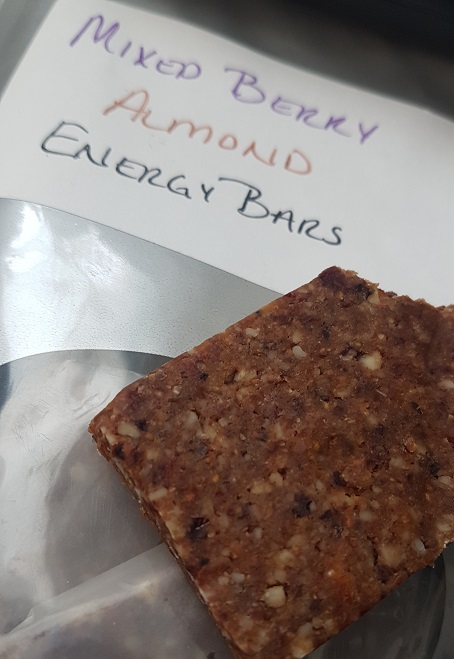 Dinner – Tonight I got weeknight fancy. I had some smoked salmon souvenirs from my trip to Alaska in the pantry, and wanted to do something with them. So I mixed one filet with mashed potatoes, and fried until crispy on both sides to make a salmon latke. 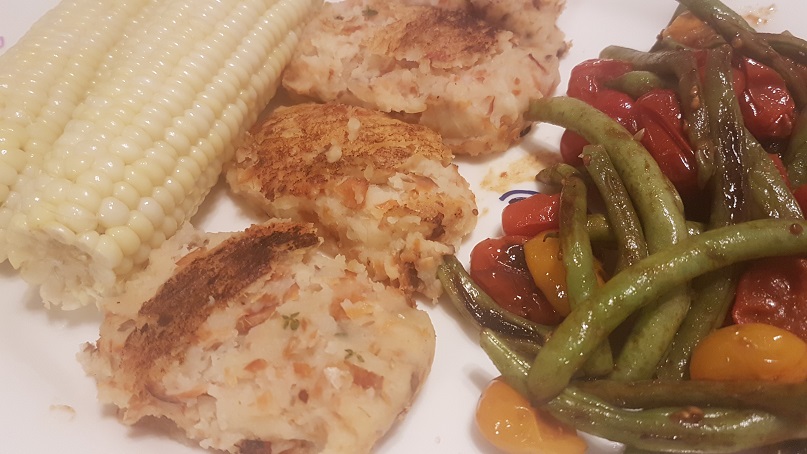 While those were cooking, I blistered some fresh green beans and grape tomatoes and baby peppers in a pan with some lemon juice, and boiled a few ears of corn. At the last minute I stirred together some plain greek yogurt, lemon juice, garlic salt, and cucumber for a quick tzatziki. All together, it took less than 30 minutes and we had a super delicious, very profesh looking dinner for a micro-date night.

Breakfast – there are a few bananas that are getting verrry brown so it’s time to bake. I mashed one up into pancake batter. Then I chopped up 2 fresh peaches and microwaved them with some lemon juice and maple syrup. A quick blitz with the immersion blender, and we had some fresh peach sauce to put on top. 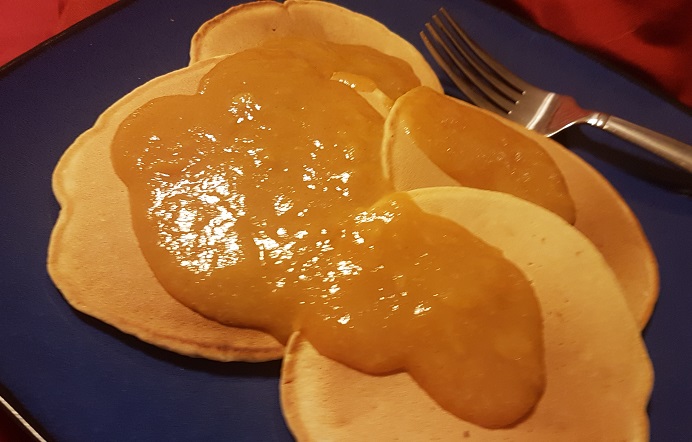 Dinner – Since I was fancy yesterday I went easy mode tonight, and boiled up a pound of pasta with my homemade tomato sauce. 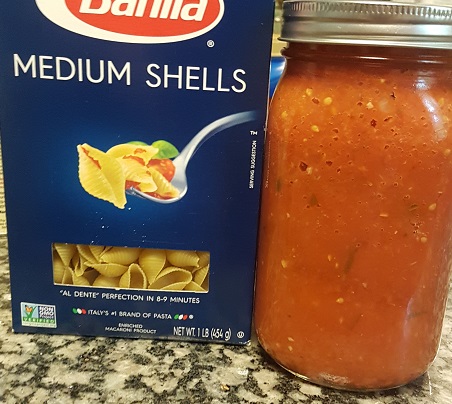 I did get industrious in the kitchen, and made a huge batch of apple cider vinegar. I had an old gallon of cider from last fall that we never got around to drinking. I won’t waste that local apple goodness, so I boiled it to kill anything questionable, and poured it into a bunch of glass jars. 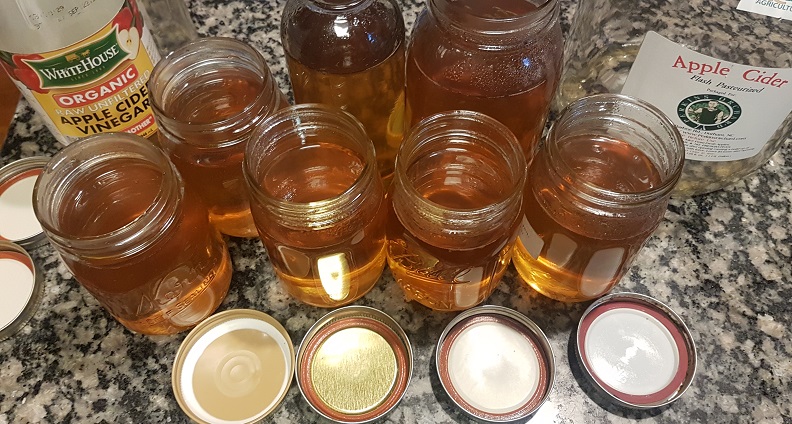 Once cool I added some ACV I already had that has the mother in it, and hopefully in a month or 2 will have a bunch of fresh ACV for cleaning and cooking. Perfect timing, since I’m almost out right now. Making your own pantry staples is so empowering, and fun!

I also shelled the half pound or so of black beans that I’ve been harvesting a handful at a time all summer. These beans were handed down from a neighbor in Connecticut, who originally brought them over from Italy I believe. This is the beauty of heirloom seeds and seed swapping, these plants have a story and a history, and one tiny seed can grow over time to produce enough food to feed you for days. It’s honestly a miracle I can never get enough of. 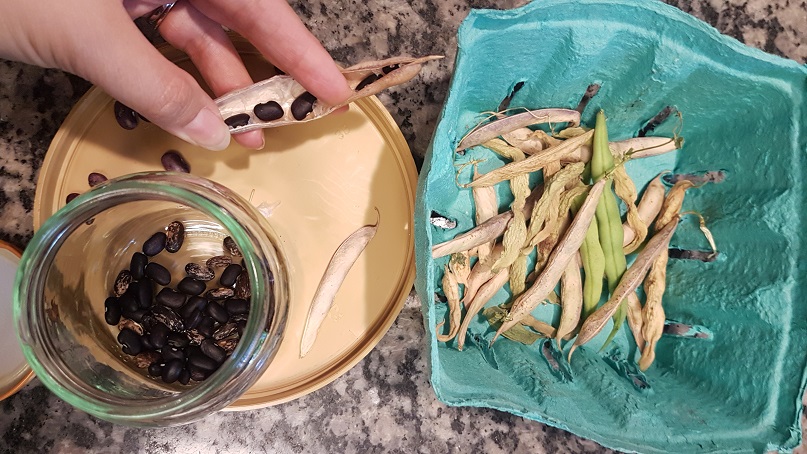 This weekend I have a friends’ 30th birthday, which is a sleepover! I’m excited to hang out with friends, and do a bunch of silly things like manicures and face masks, watch chick flicks and eat popcorn.

I did one trip to the grocery store last Sunday, because canned goods were on stock-up sale, and after working hard outside the boy needed some serious fuel. So I got a big loaf of fresh bread and layered on nearly 2 pounds of deli meat, pickled jalapenos, and condiments for him. It hit the spot. 🙂

It feels really good to make progress on creating your dream life every day. We had been wanting to take down trees since moving in almost two years ago, and now we finally did it. The big, threatening ones were taken down professionally, so I no longer worry about storms knocking trees into our kitchen or living room. And the boy got to play lumberjack and take down the smaller ones, giving him a great workout and now we have a big ol pile of wood for bonfires all fall and winter long.

And making things is always fun! Even if it doesn’t turn out exactly like you think it will or want it to, you still feel a sense of accomplishment, like, yeah I made a thing. It just feels so great to be a producer and not a consumer sometimes.