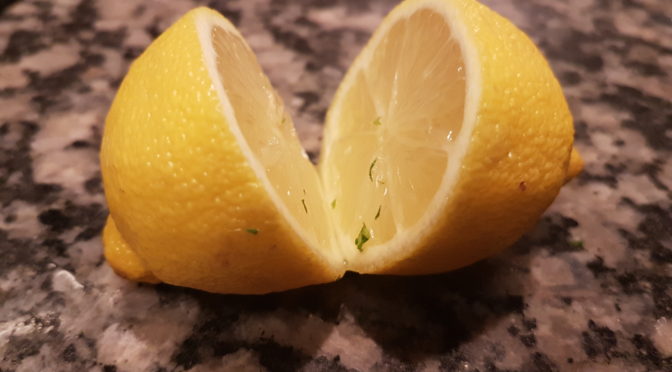 So remember the part where we are eating 80% vegetarian this year? I’d say we have totally nailed it so far! We had some great successes this week, and a few fails too. The week did include an impromptu cross country trip, for a family emergency situation, so that sort of threw the meal plan off the rails a bit. However, it was for good reason, and didn’t damage the budget too badly.

I just adore the bright pink colors going on here! Imagine all those lovely flavonoids running around my bloodstream detoxing and getting rid of free radicals… no, just me? #sciencenerd 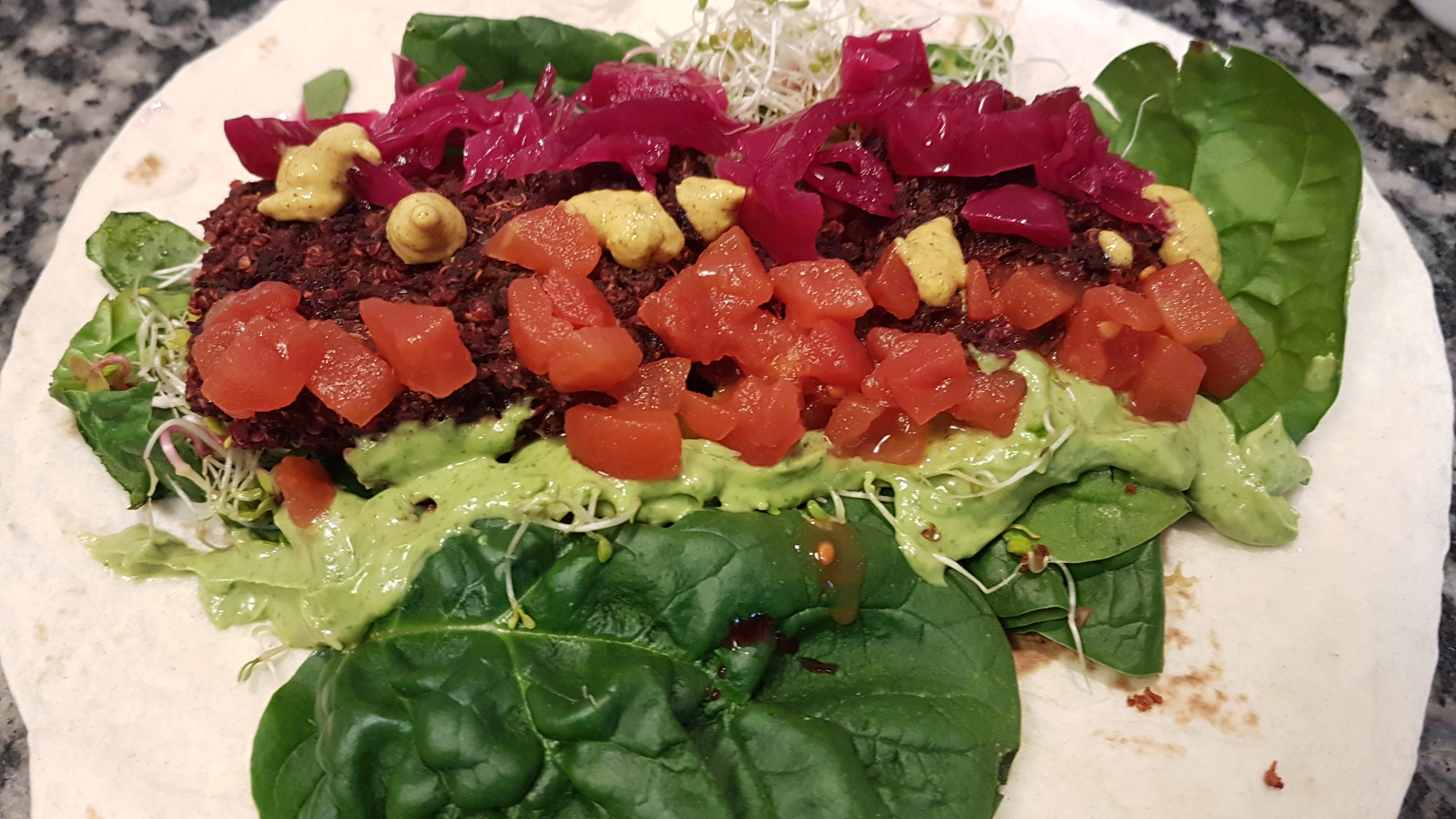 Dinner –Homemade pizzas. I whipped up overnight refrigerator pizza dough on Sunday so these were easy breezy. The boy had pineapple, ham and mozzarella on his, while I added handfuls of veggies to mine. 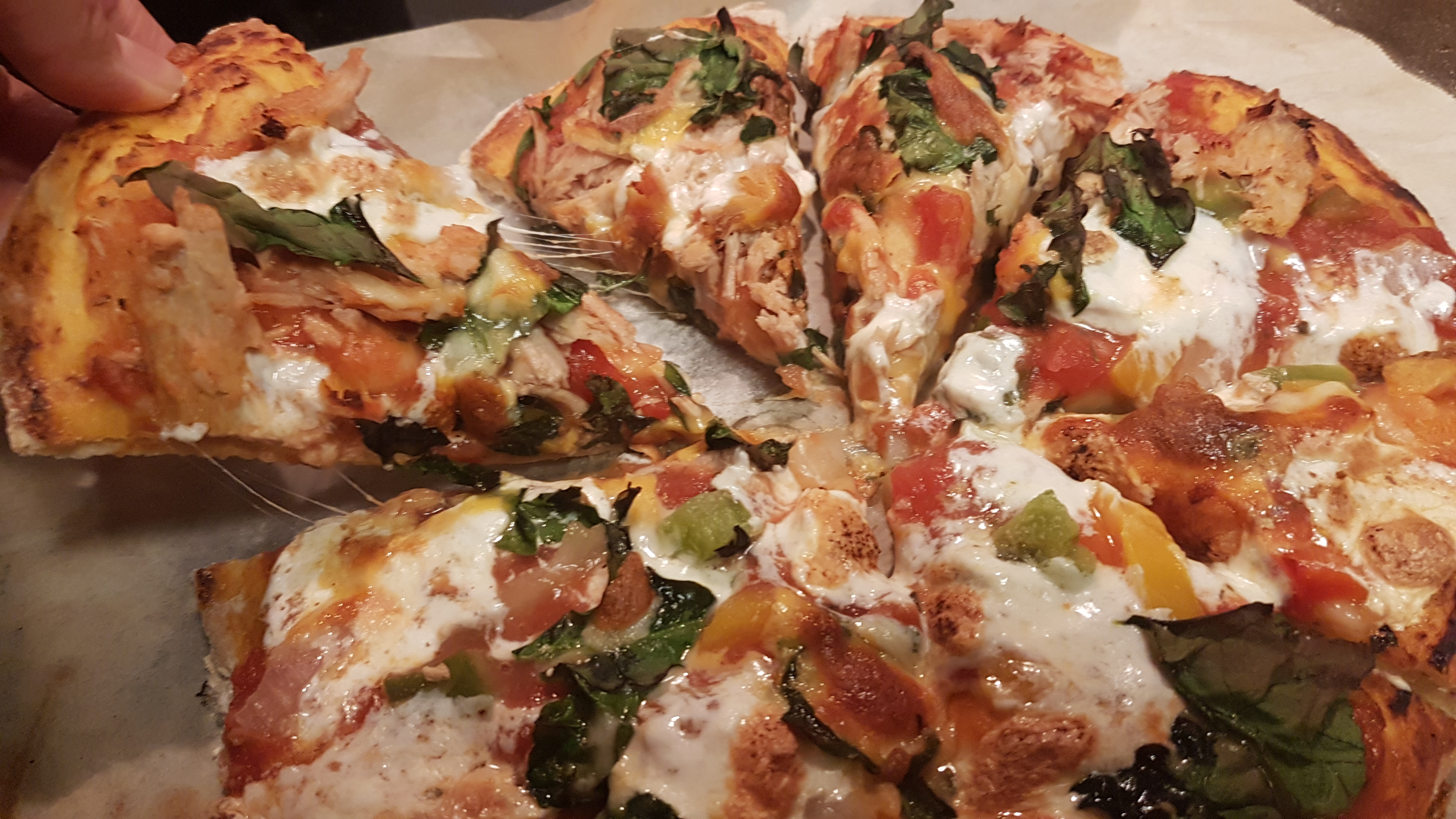 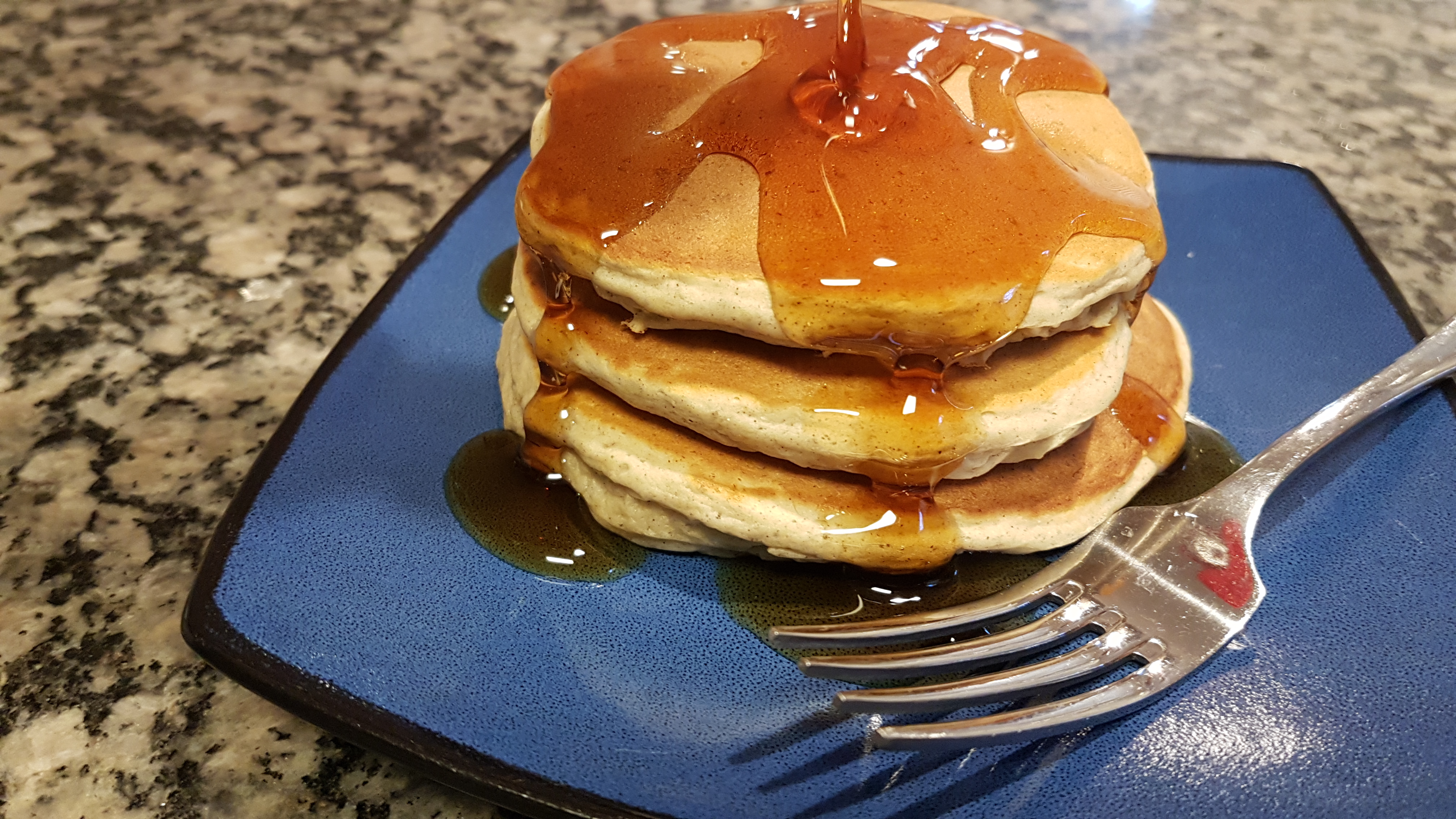 Dudes, I had never had cardamom before (I think) but it’s one of the highest antioxidant spices so I’m trying to incorporate it into my cooking more. This pancake recipe was so simple, I whipped up the batter in a blender and poured it right onto the griddle. Easy peasy, and they came out fluffy and perfect. #winning 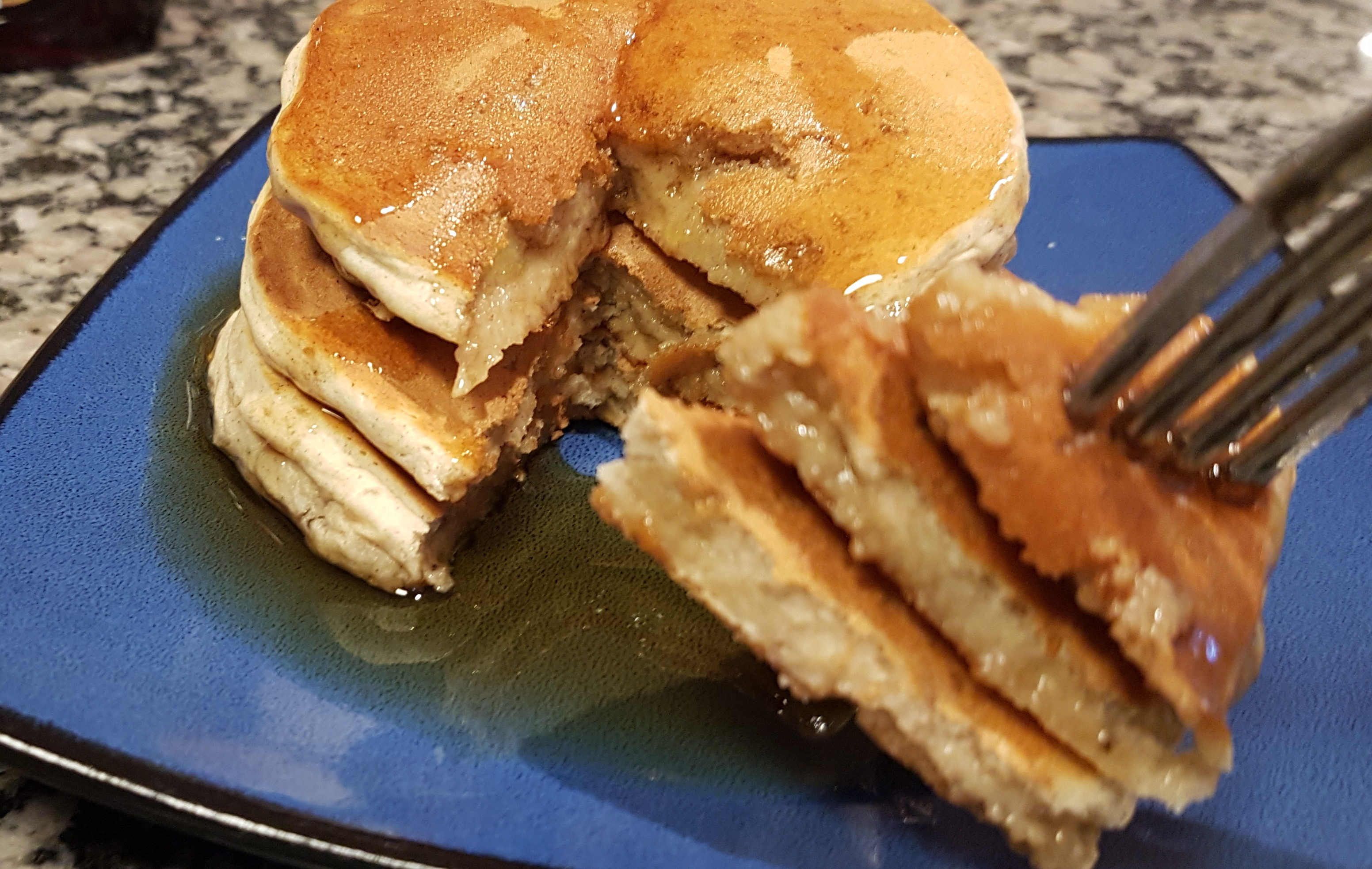 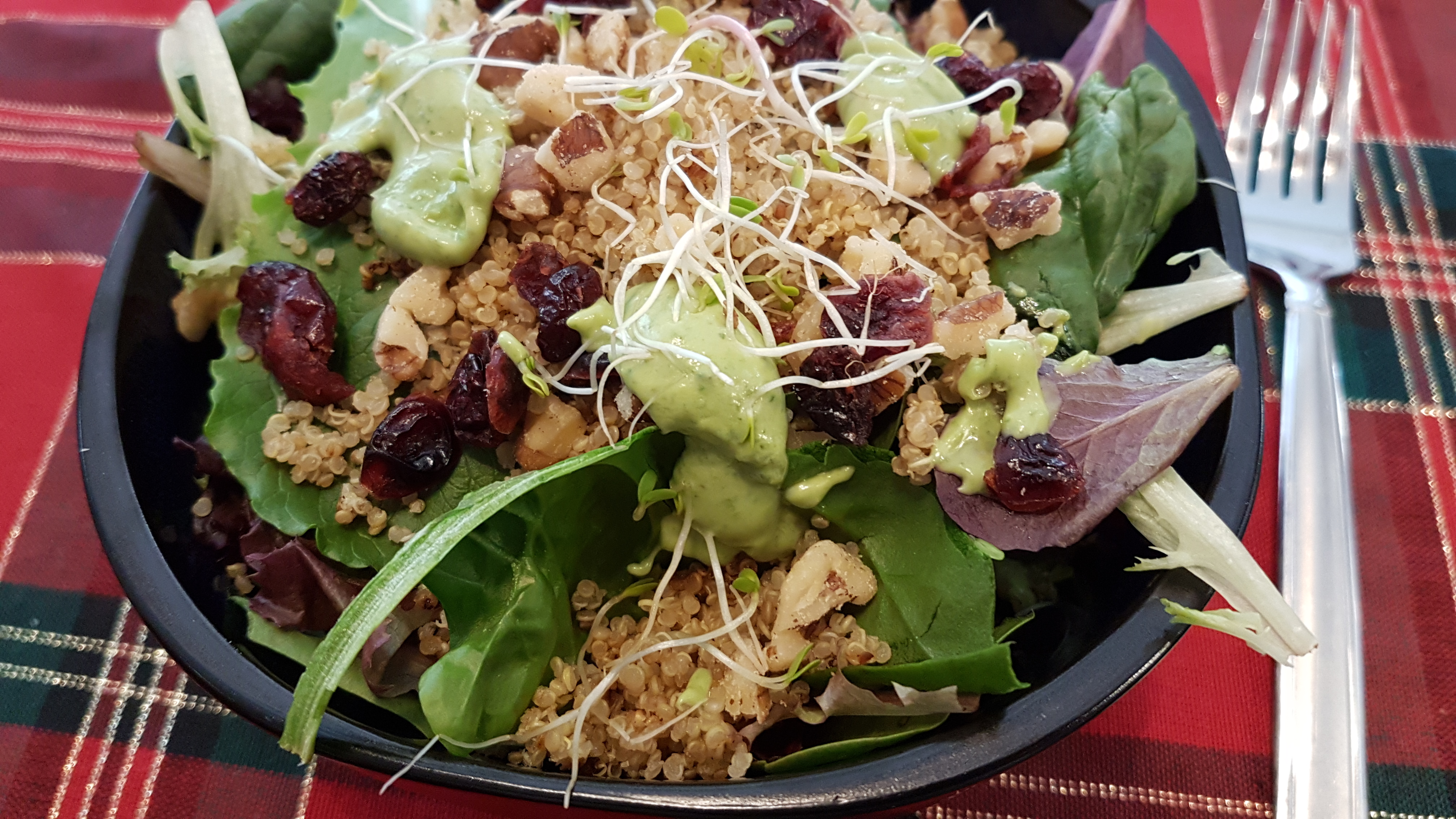 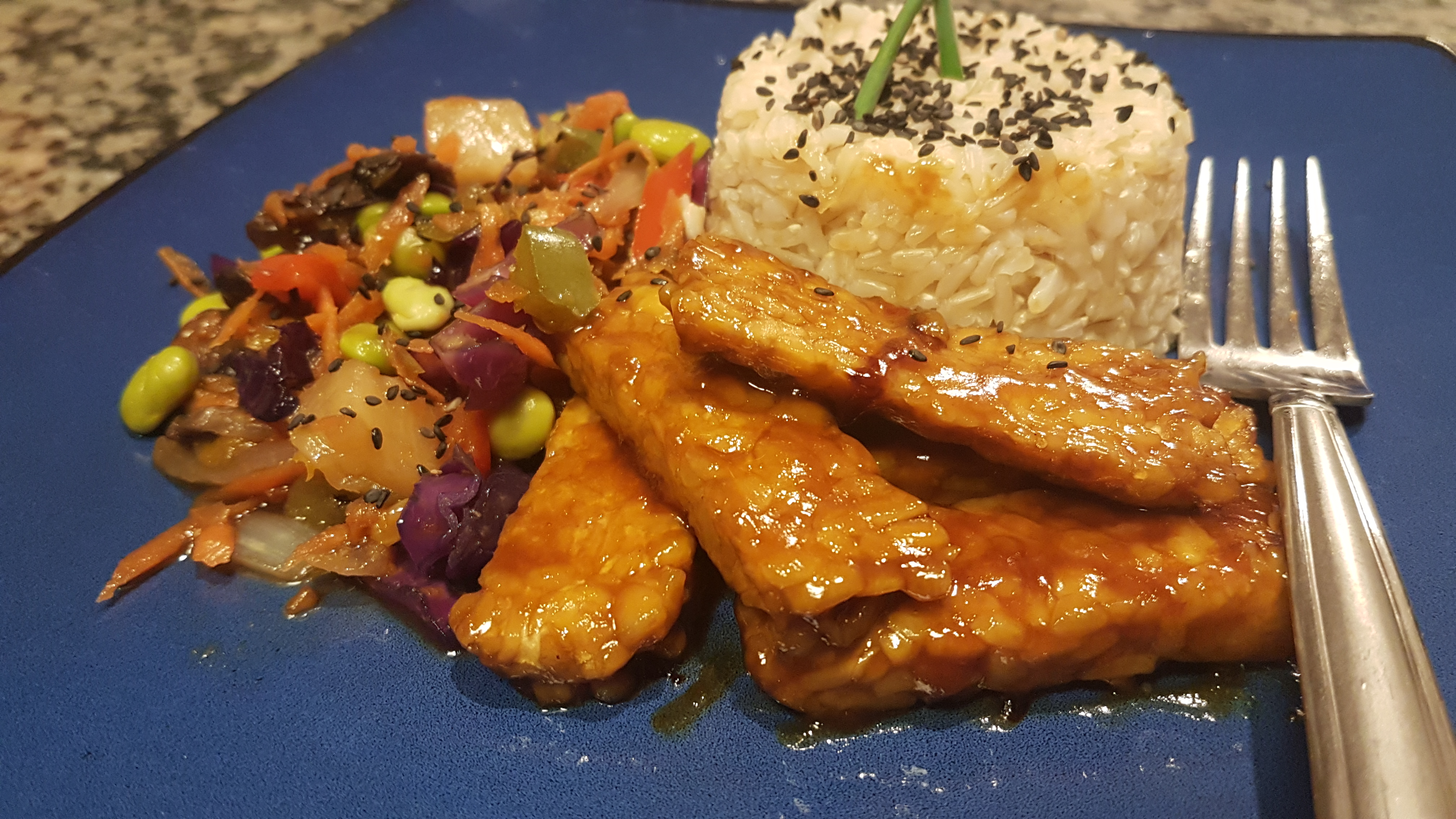 Guys. Guys, I made a vegan meal that the boy said he loved and would eat again! That’s a huge win! TBH it was super tasty, I would eat it again, and also I nailed the plating. (Pats self on the back)

Lunch – leftover mushroom risotto from last week. There was a lot left and we were leaving town, so I wanted to eat it up. However, after sitting for a few days, it became thicker and… blah. I forced down a few forkfulls, but couldn’t come close to eating it all. That led to a starving afternoon of snacking… 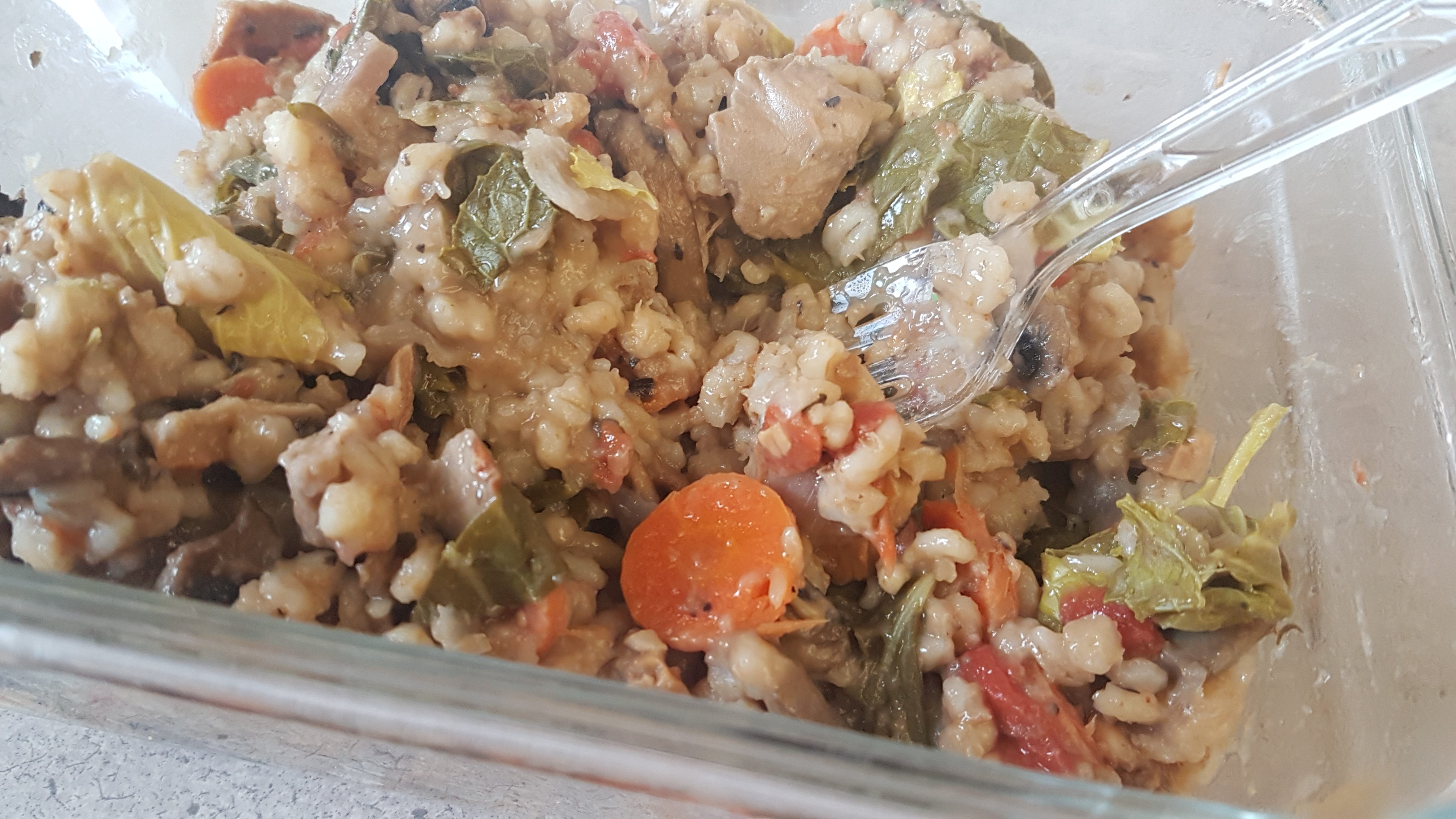 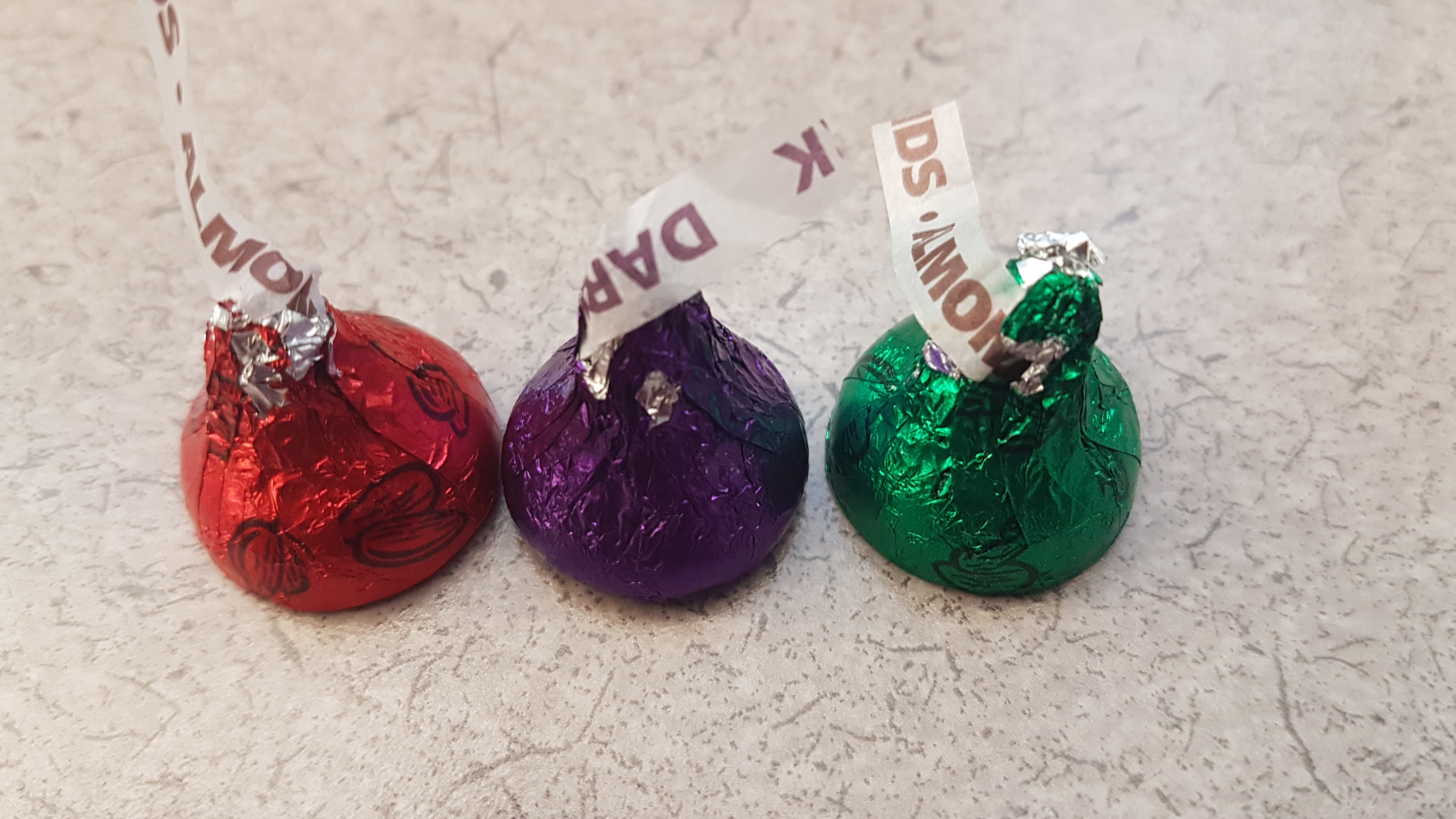 Well apparently 3 almonds isn’t enough protein to satisfy, so I was rooting through my desk drawers about a half hour later. I did bring this vegan banana bread that I swapped at last month’s Bull City Food Swap… sad to say, it also was “meh”. But when I found a tiny peanut butter packet, and was also getting hangry, it was like sweet mana from heaven, and I ate half the loaf. 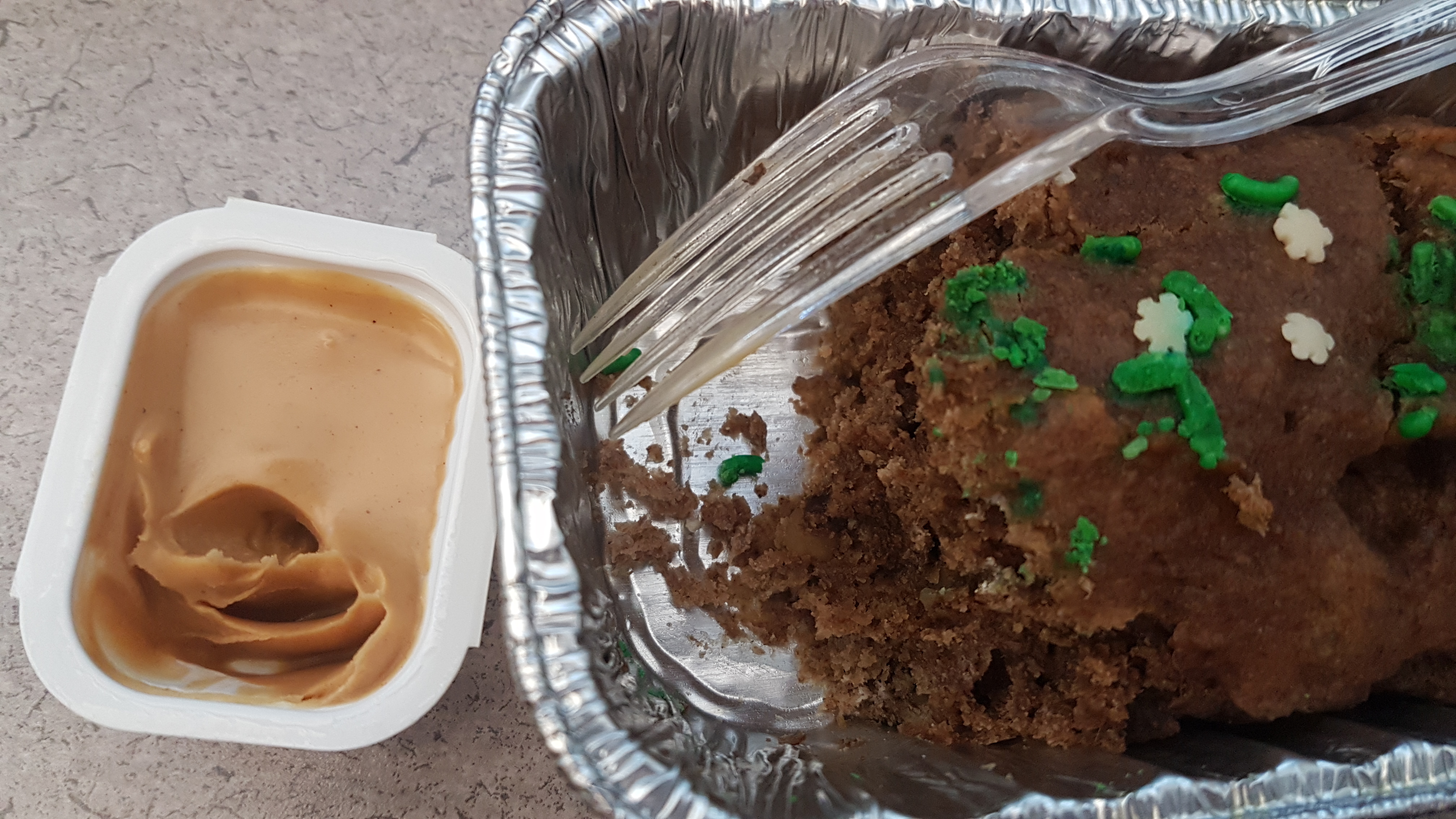 Dinner – Lemon Garlic Parmesan Pasta with a salad. I needed to use up several lemons, so I whipped up a super simple pasta dish. 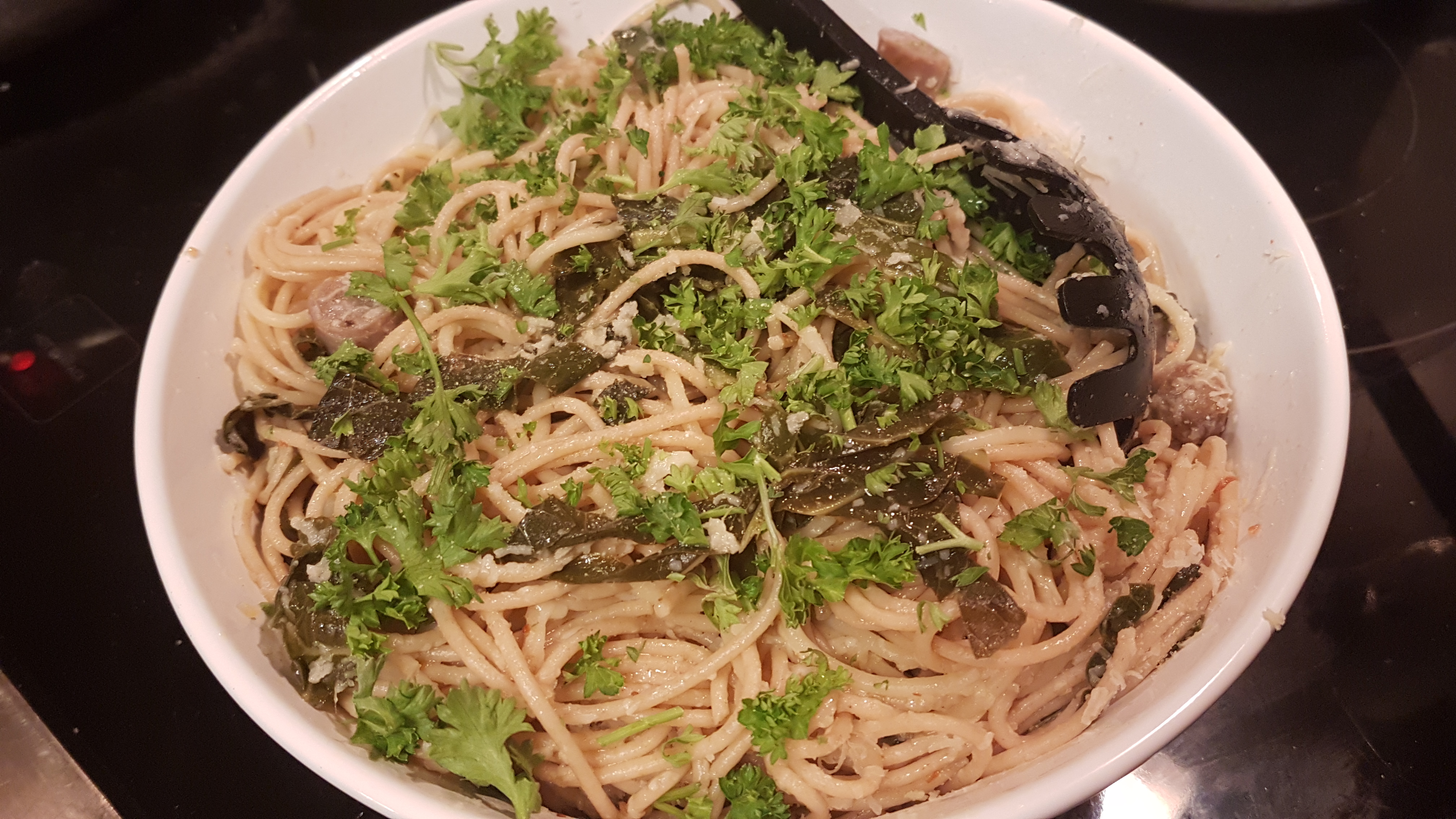 Breakfast – stressful morning getting to the airport and literally making our flight by ONE minute… so, breakfast was coffee and airplane snacks.

Lunch – stopped by a BBQ place, and they had a Thursday Special: $2 pulled pork sandwich! We were totally in, and they were delicious. The pork was so moist, and the BBQ sauce flavorful. 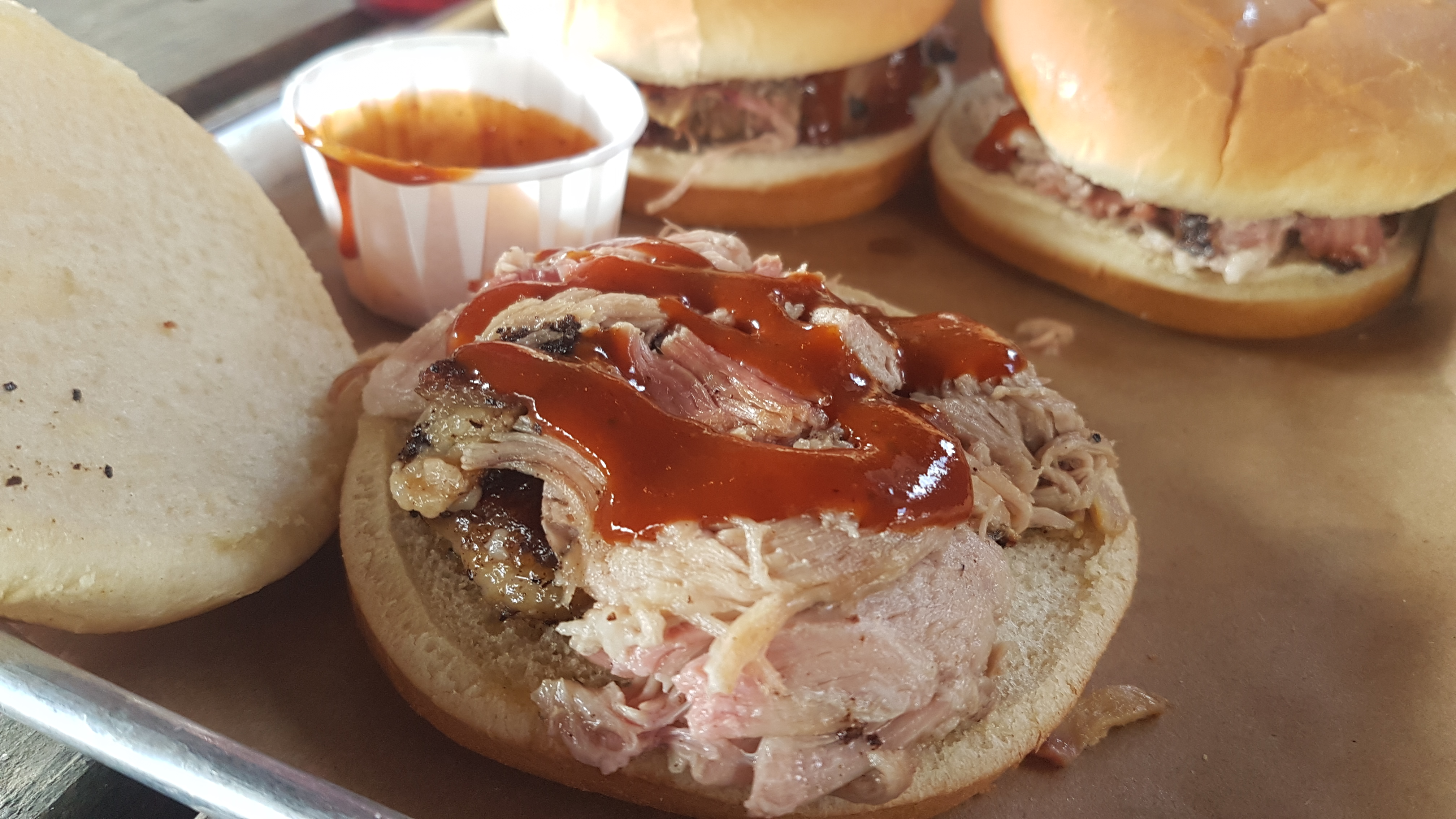 Dinner – a local pizza joint is a favorite here, so we had to indulge when in town. I got the Brussels sprouts one, which had sweet hot pepper jelly on it and was super tasty, while the boy got a meaty spicy one and compromised with a bacon jam covered in arugula as well. They were all amazing, and we ate nearly the whole thing! 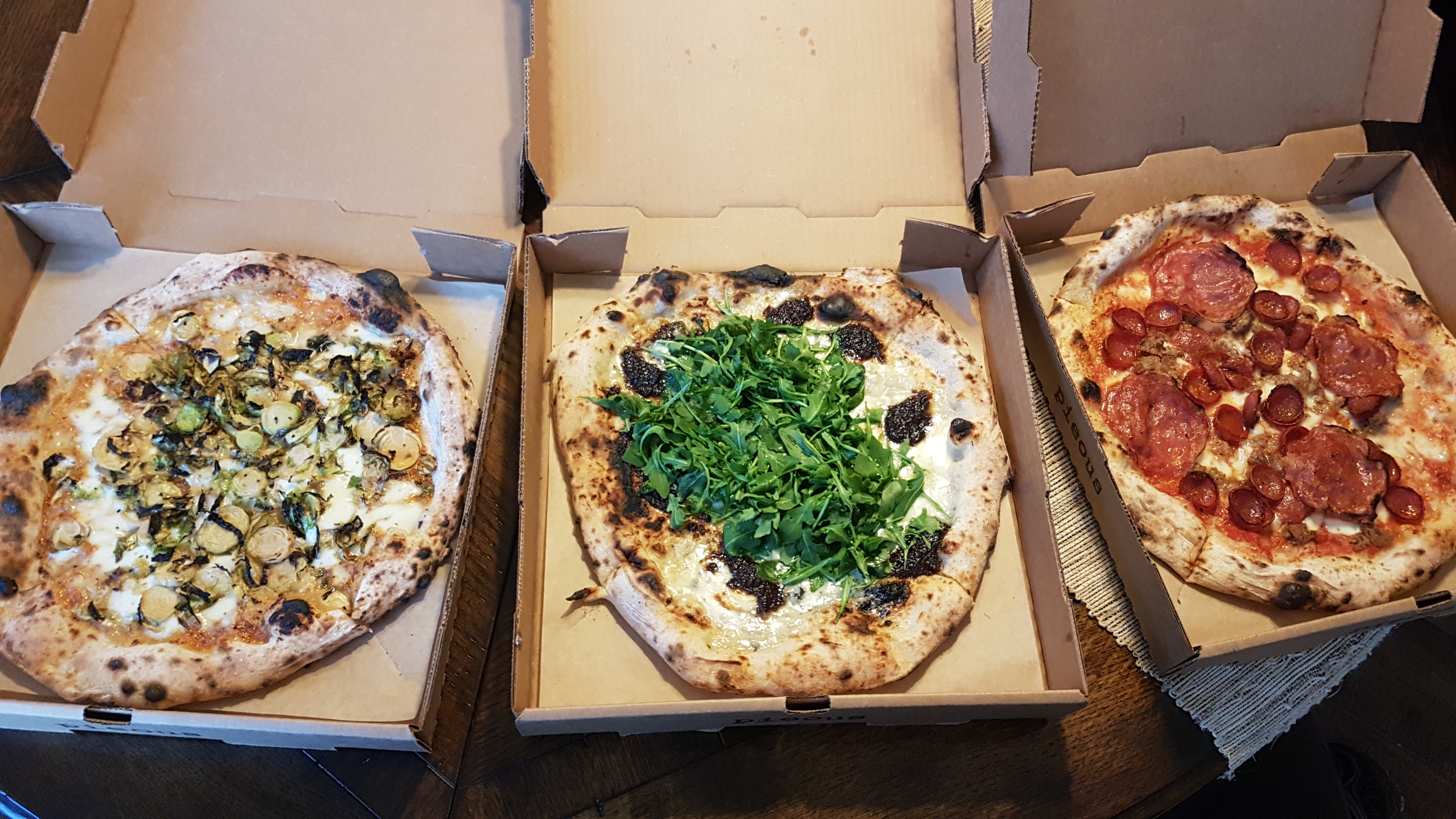 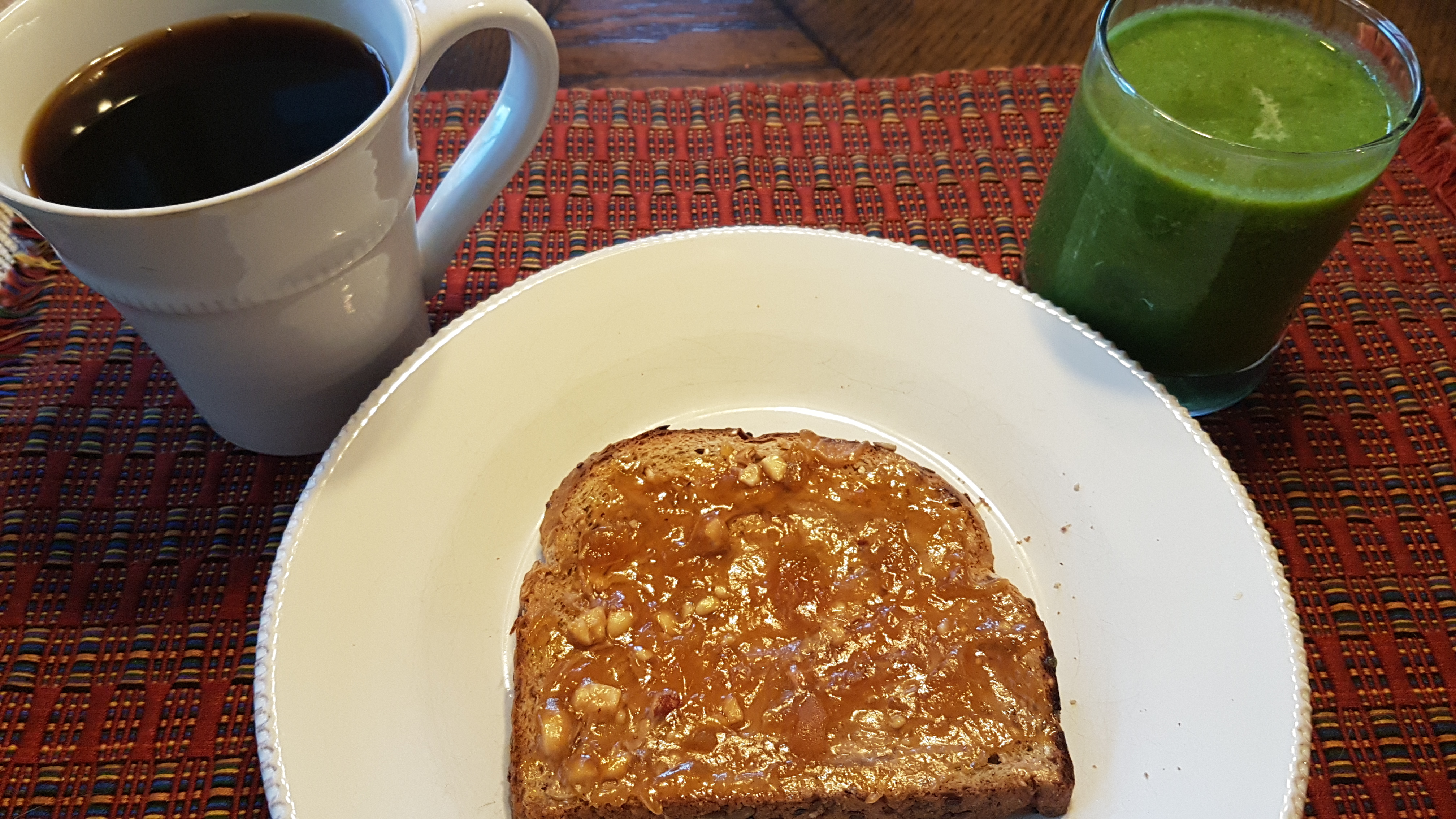 Mom in law is obsessed with this smoothie which includes pineapple, spinach, coconut water, and jalapeno. It is fruity with a hint of spice, which is strange but definitely tasty. 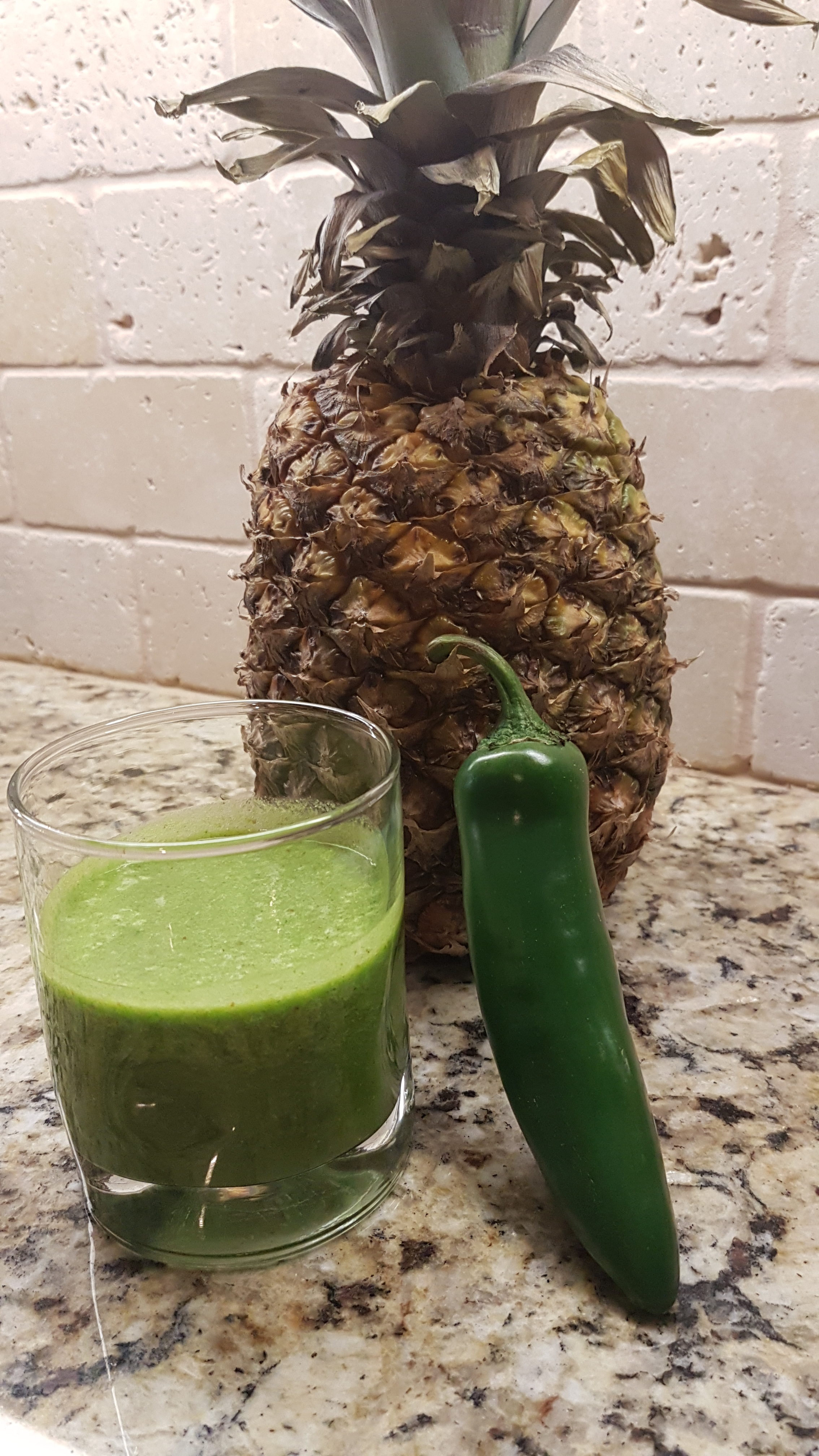 Lunch – Leftover pizza, which I threw a handful of salad greens on top of to make myself feel better about eating pizza for at least 4 meals this week… 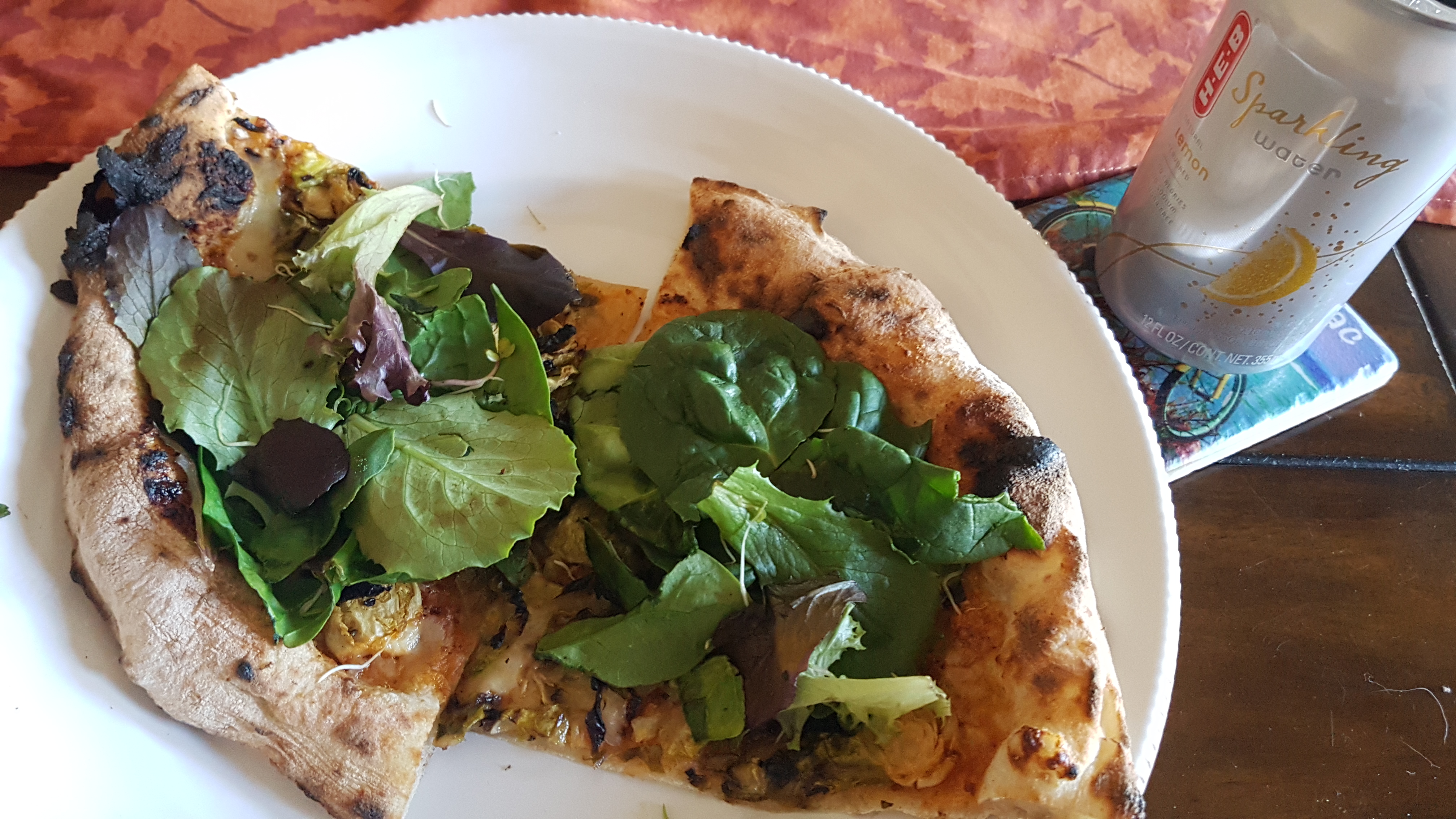 Dinner – Korean tacos. It is super simple, a crock-pot beef roast with sweet sauce, a fresh crunchy slaw, and a peanutty dressing. They were really tasty, and I need to get the recipe. 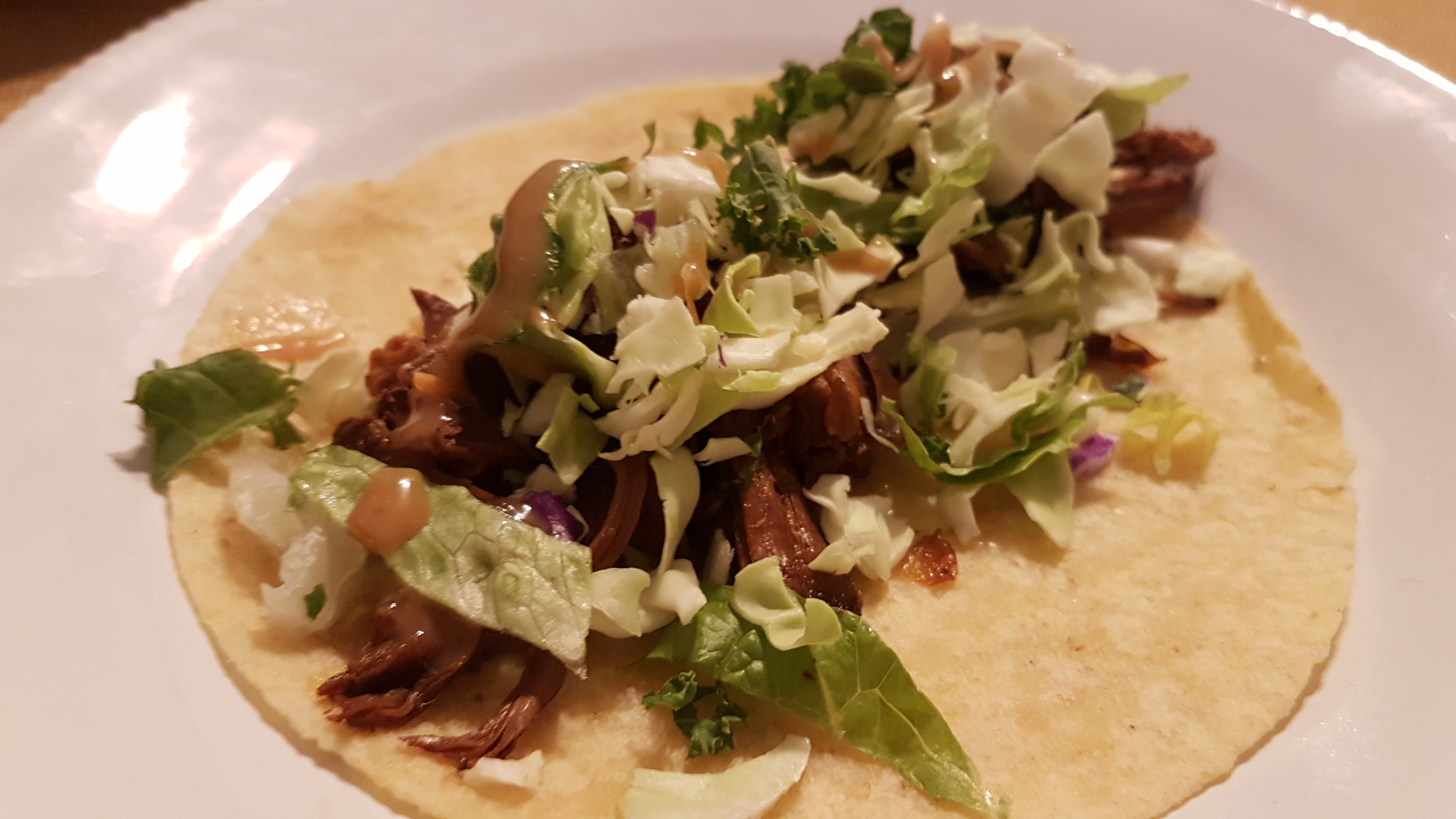 Snack – Chips & salsa. I cut up half an avocado, and mixed it with a half cup of salsa for a satisfying snack. 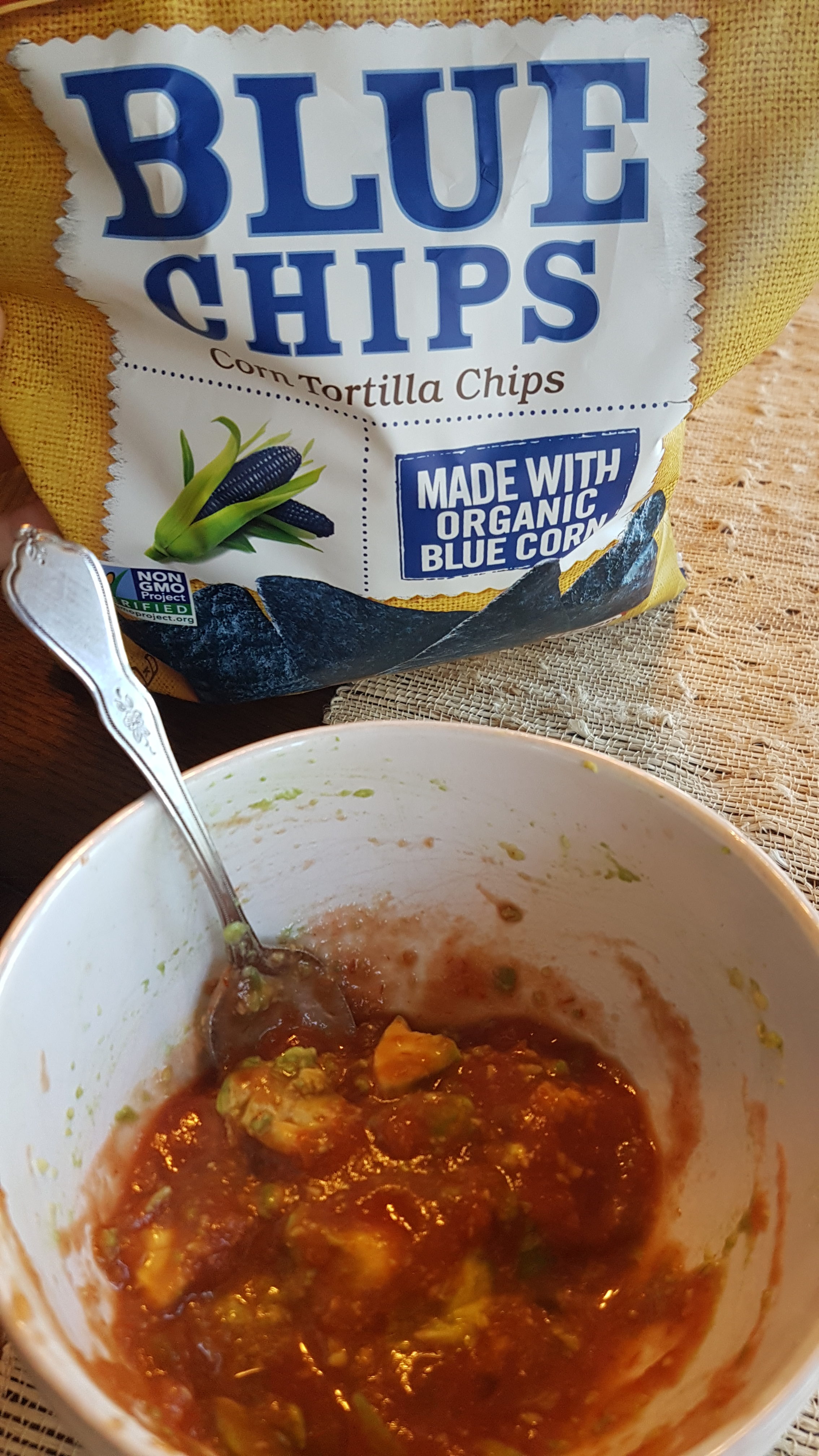 This weekend will be spent relaxing and spending time with family. We may get to go out and explore a little, and perhaps see some of hubby’s friends. The in-laws are great and are covering most of the groceries, so for food we will only spend on anything we go out for.

This week was just stocking up on frozen berries because we were out, and some other staples like soymilk, produce, and boxed wine. Don’t judge me, tons of people love boxed wine, even frugal folks and hard core wine lovers!

Thanks to last week’s big stock up, and tons of food still hanging out in the freezer and pantry, we should be set for at least another week (with the exception of a produce run). Maybe I need to do another of my own January Pantry Clean-Out challenges.

How was your week? Are you flexible with meal plans, or how do you deal with surprise travel?