Happy Easter, if you celebrate!

Well, to balance out last week’s super frugal food spending, I way over spent this week! I cannot be trusted in grocery stores, even with super detailed lists, it seems.

Also, the boy was out of state on a work trip all week, which means I got to go out and party with friends on a work night, twice! Woo hoo, the crazy life of a 30 year old. 🙂 I did basically 2/3 of my eating-out for the year in one week. I don’t ‘go out’ a whole lot since I like cooking so much.

But, it was really nice to finally get a lot of one on one friend time with several different people, and try out a few new food spots. I’m always on the hunt for new stand outs, and good places to take people who visit from out of town. I’d say there are a few new names on the list now.

Breakfast – Last of the sweet potato biscuits with honey. Hoping to make a new batch of these over the weekend, they are seriously the perfect breakfast.

Dinner –Last of the tortilla soup.

So I thought I had already finished this, but I tricked myself! I put some away in regular containers, but then also one mason jar full. I found it when trying to rearrange the fridge, and had that for dinner. Just as satisfying as I remember. 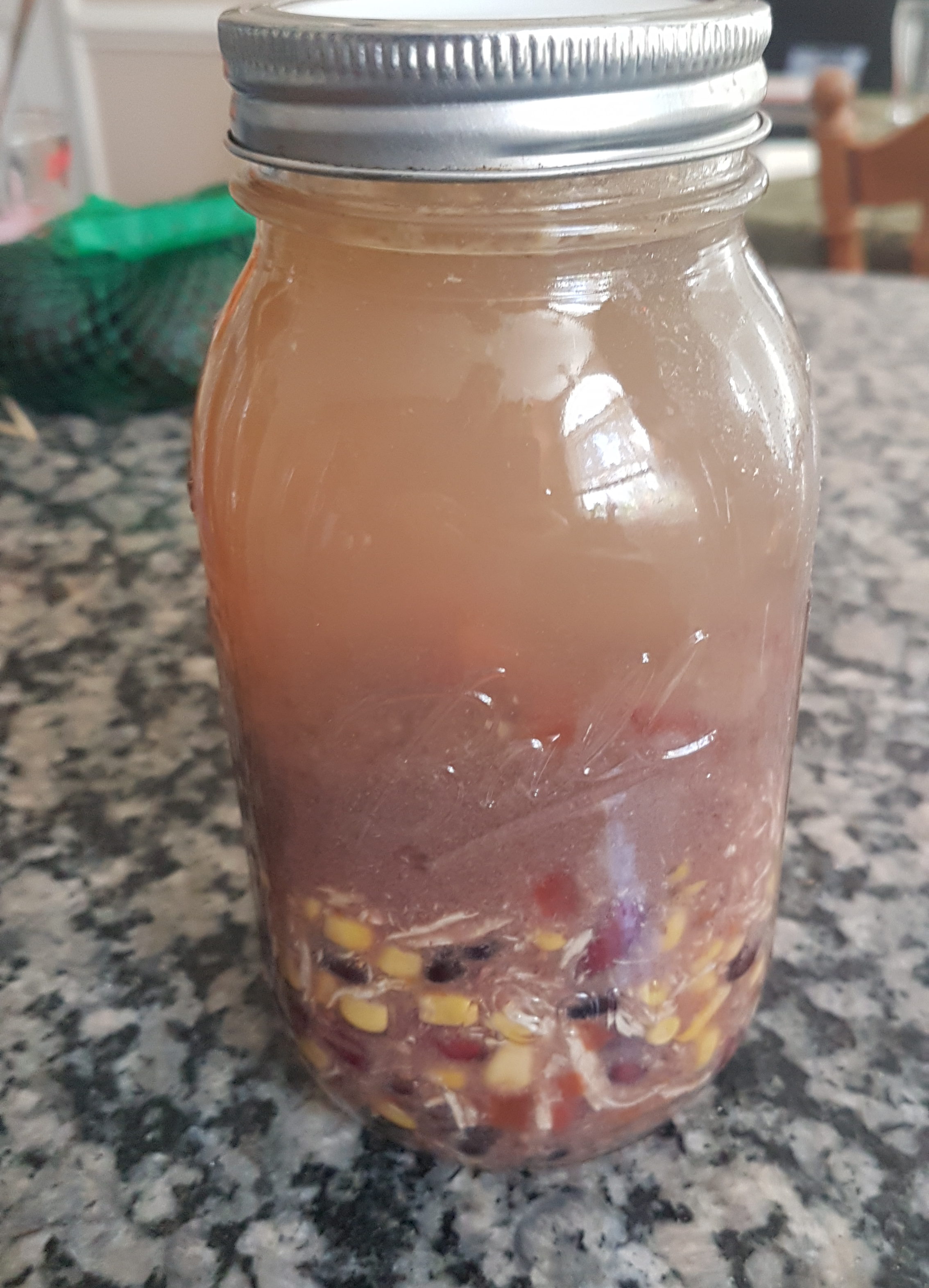 Breakfast – The last slice of my banana bread loaf. Found it in the bottom of the cheese drawer for some reason… and, I have 2 bananas turning a darker brown every day on the counter, so it might be time to replenish the supply.

Lunch – The rest of the Spring Green Creamy Gnocchi

Snack – Cut up pineapple and honeydew 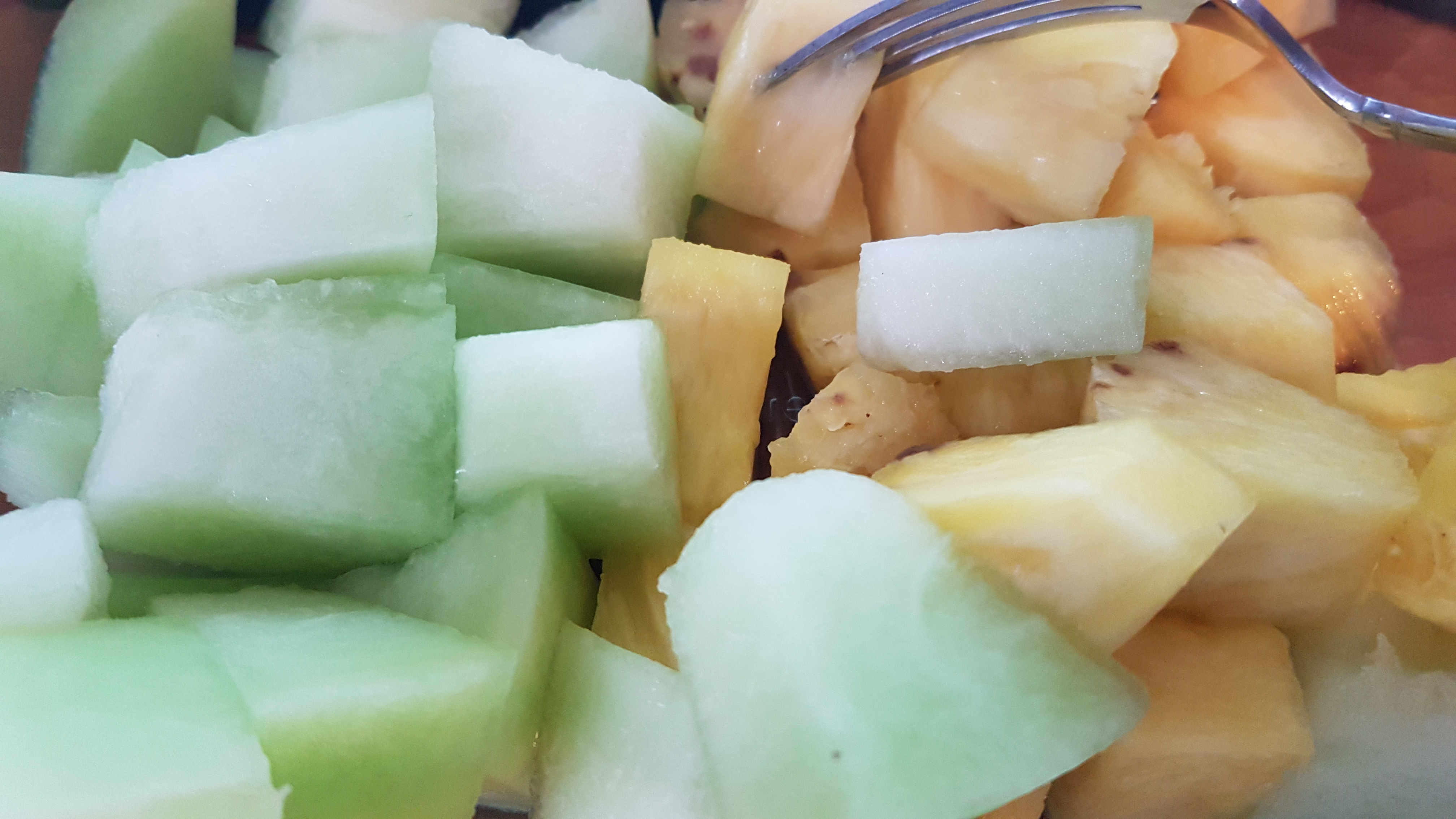 Dinner – Out with a friend! We went to a place in Durham called Juju, which is a pan-Asian tapas bar. The menu is all fancy small plates meant for sharing, and they have half off wine on Tuesdays! Of course, I’m totally frugal, and not their target audience at all. When I see $45 for a bottle of wine, my first thought is I could get like 9 liters of boxed wine for that price!

We ended up with the house special red in a carafe, and the waiter actually made a dig about it (because it is the cheapest wine on the menu). But I don’t care, it still was enough for us both to have 2 glasses and that was actually quite enough, thank you very much. I gotta drive my butt home, sir. 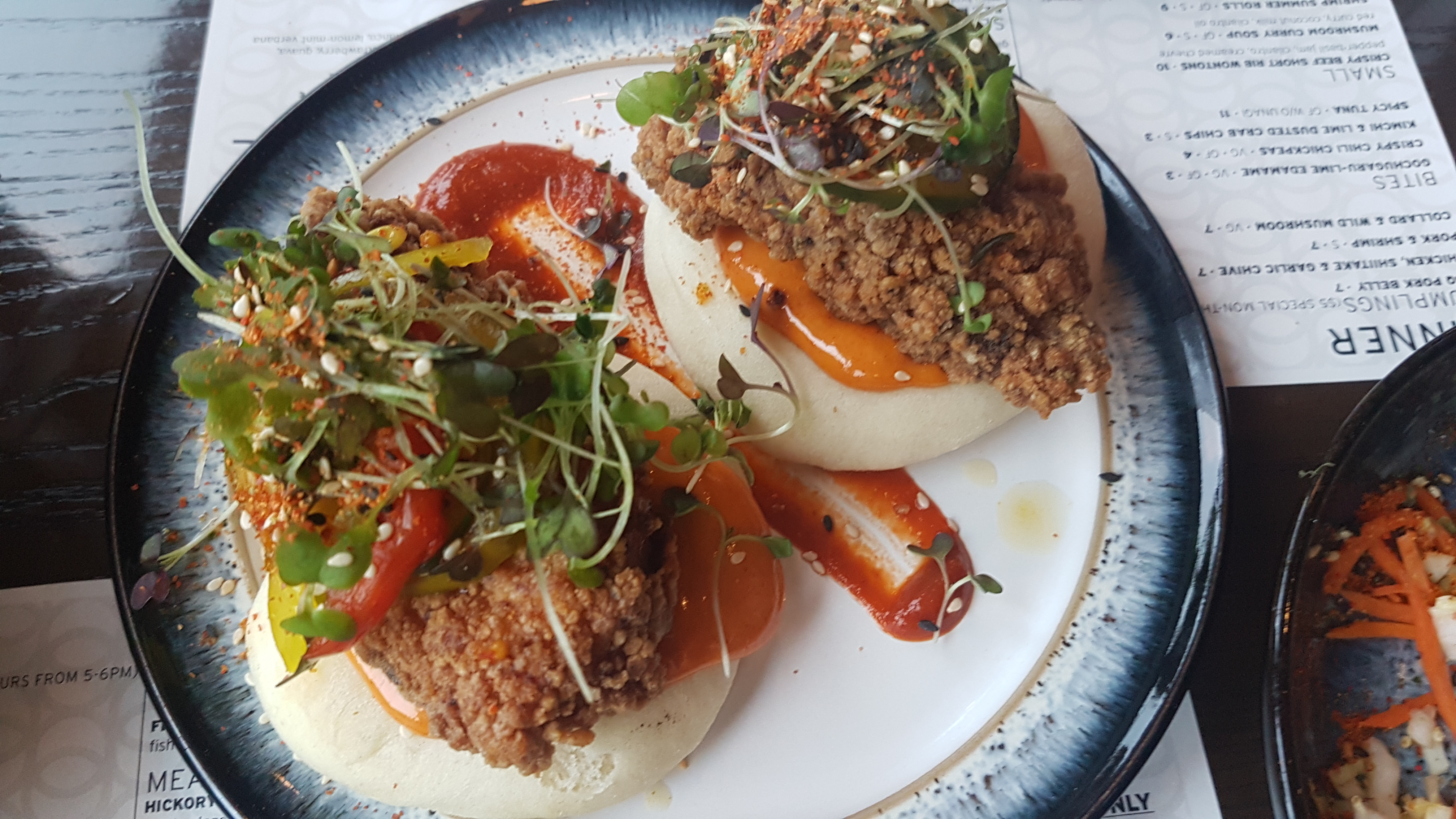 We each chose 2 things, and split everything. The plates looked smallish, but the presentation was on point, and everything was tasty. It was actually really filling, we were struggling to finish it all by the last course. The duck fried rice (below) was excellent, and the fried chicken buns (above) were definitely the star of the show. 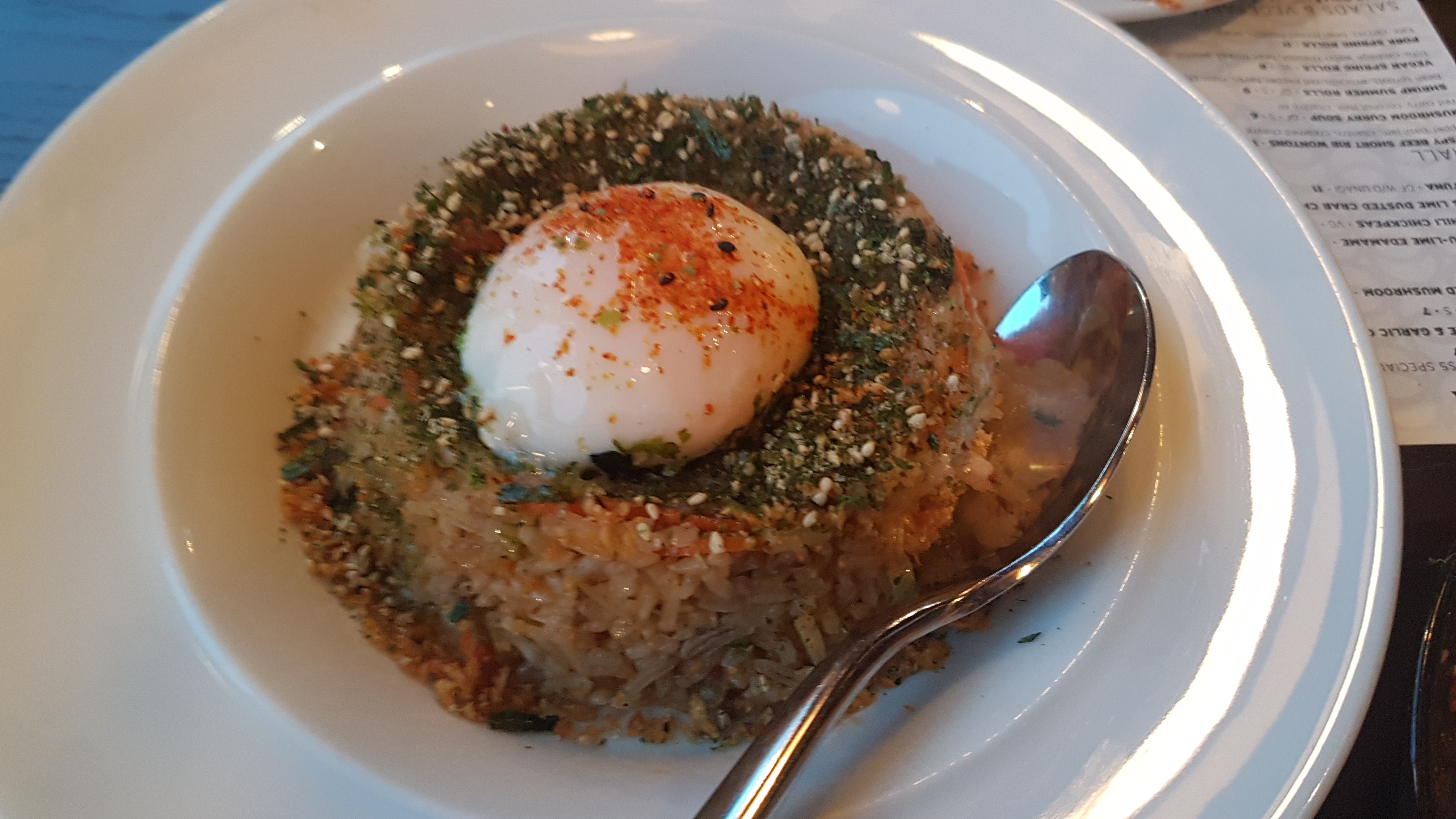 I was surprised by the vegan spring rolls, since they were fried. I thought spring roll meant the cold rice paper wrapped kind, but oh well. It was a lovely night, and even though it was pushing $40 for one meal, it was worth the time spent chatting and enjoying myself. 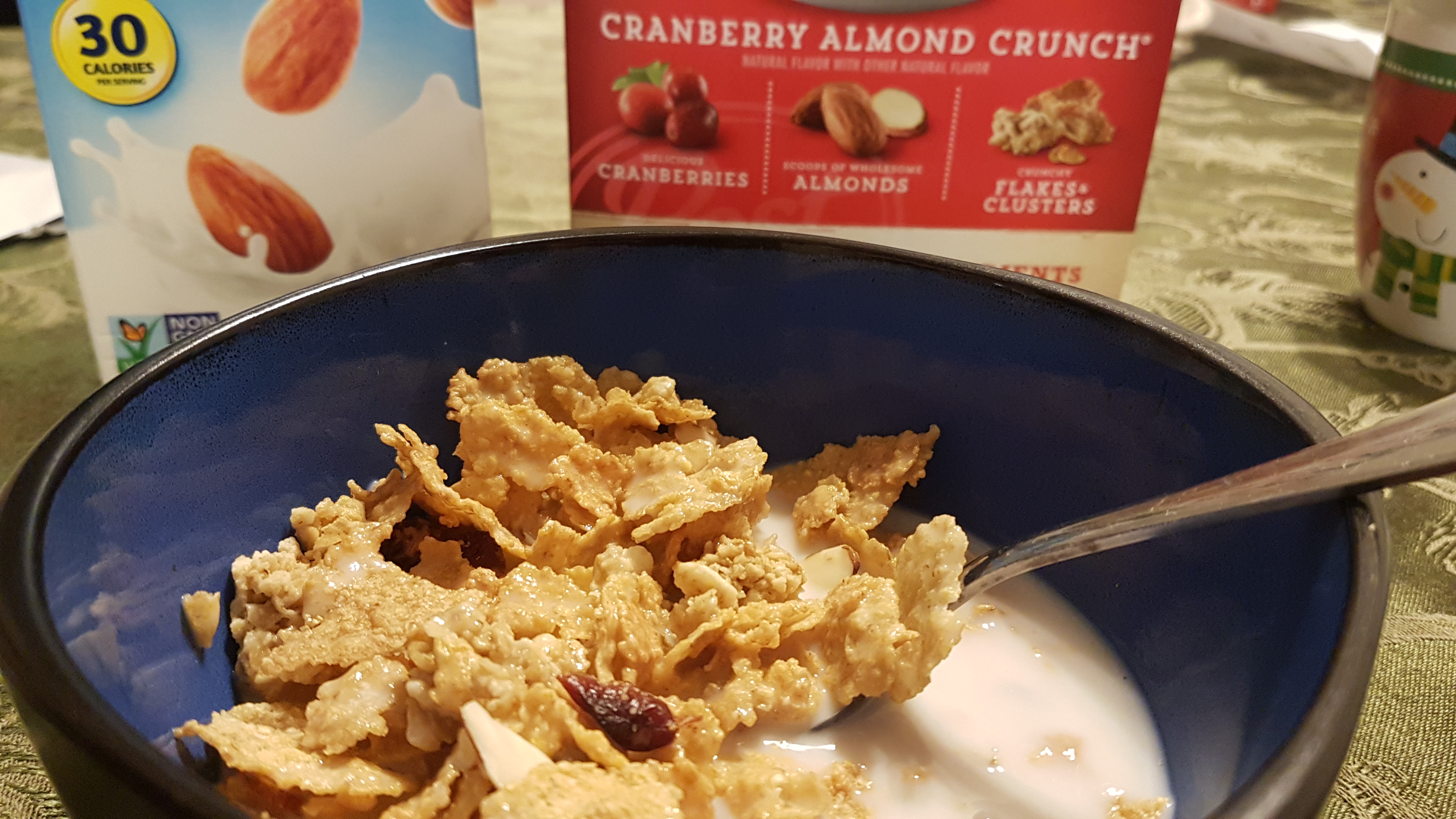 Lunch – A big mixed greens salad, and a slice of leftover pizza from the weekend. 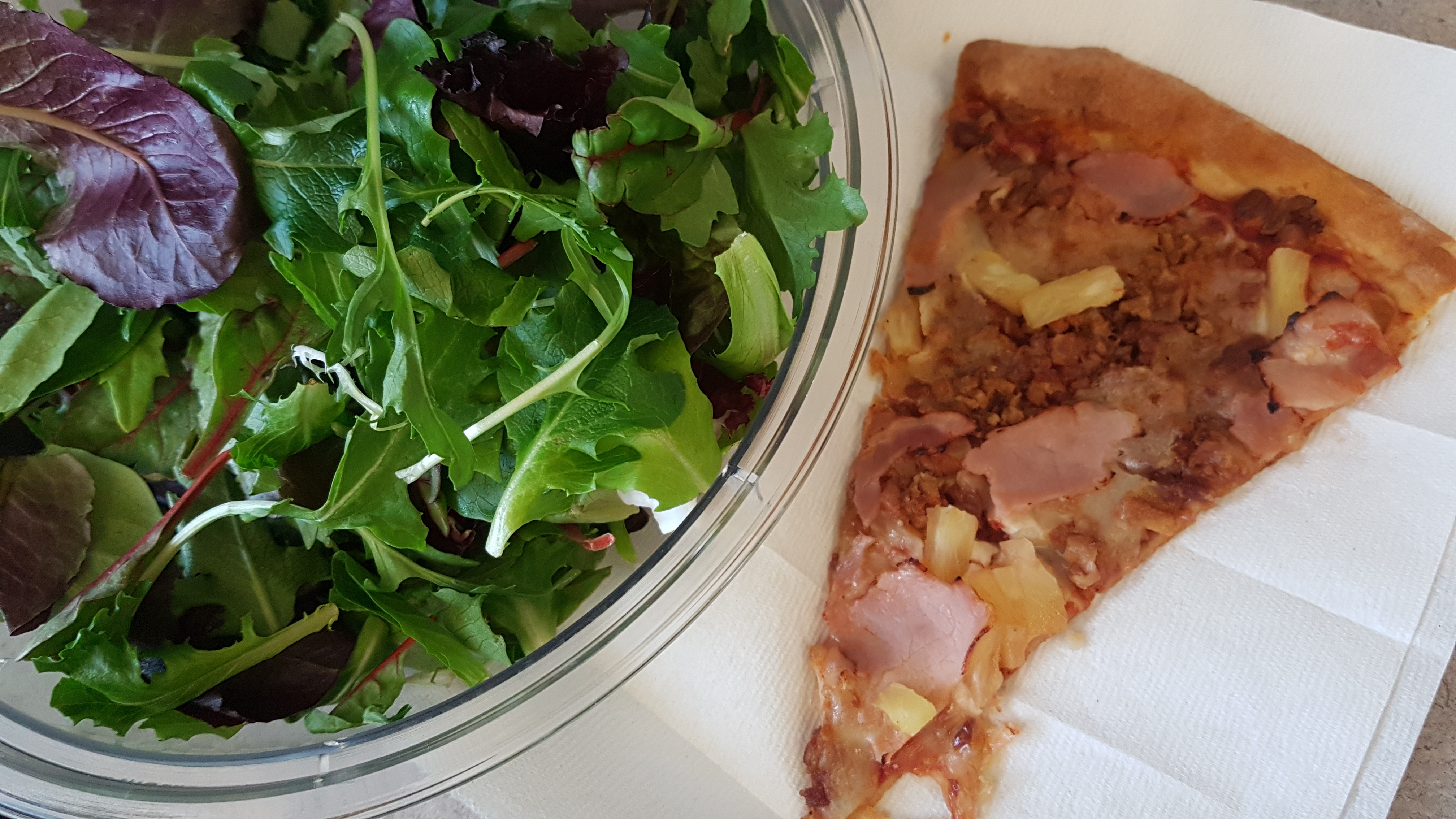 Snack – More pineapple and honeydew! A honeydew is a large fruit, turns out… and I had 2 pineapples cut up. So. 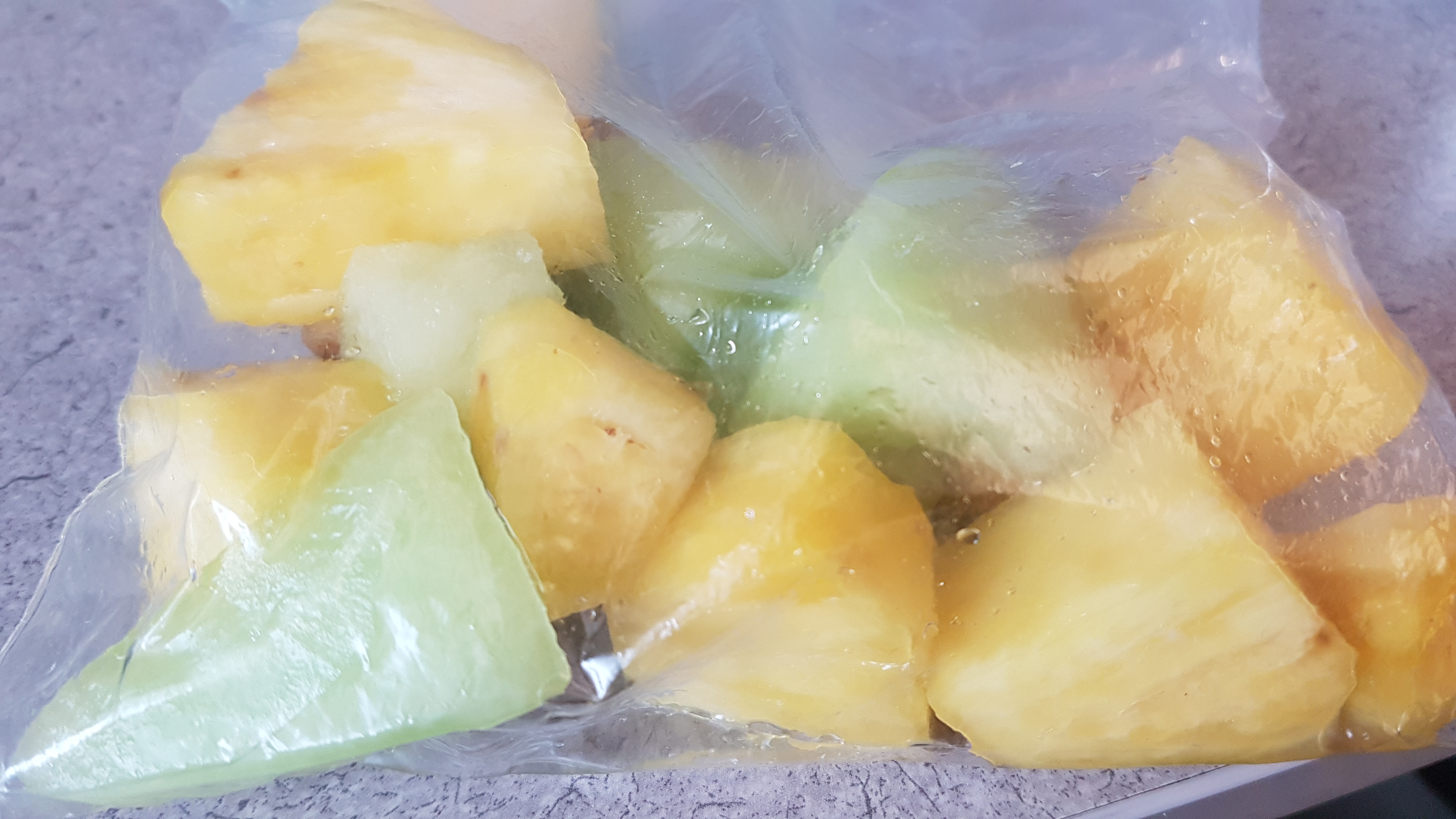 Dinner – I did not have a plan here, but there was a lot of cabbage, and pinto beans that had to be used ASAP. So I was like, hybrid stir fry slash beans and rice? Why not! 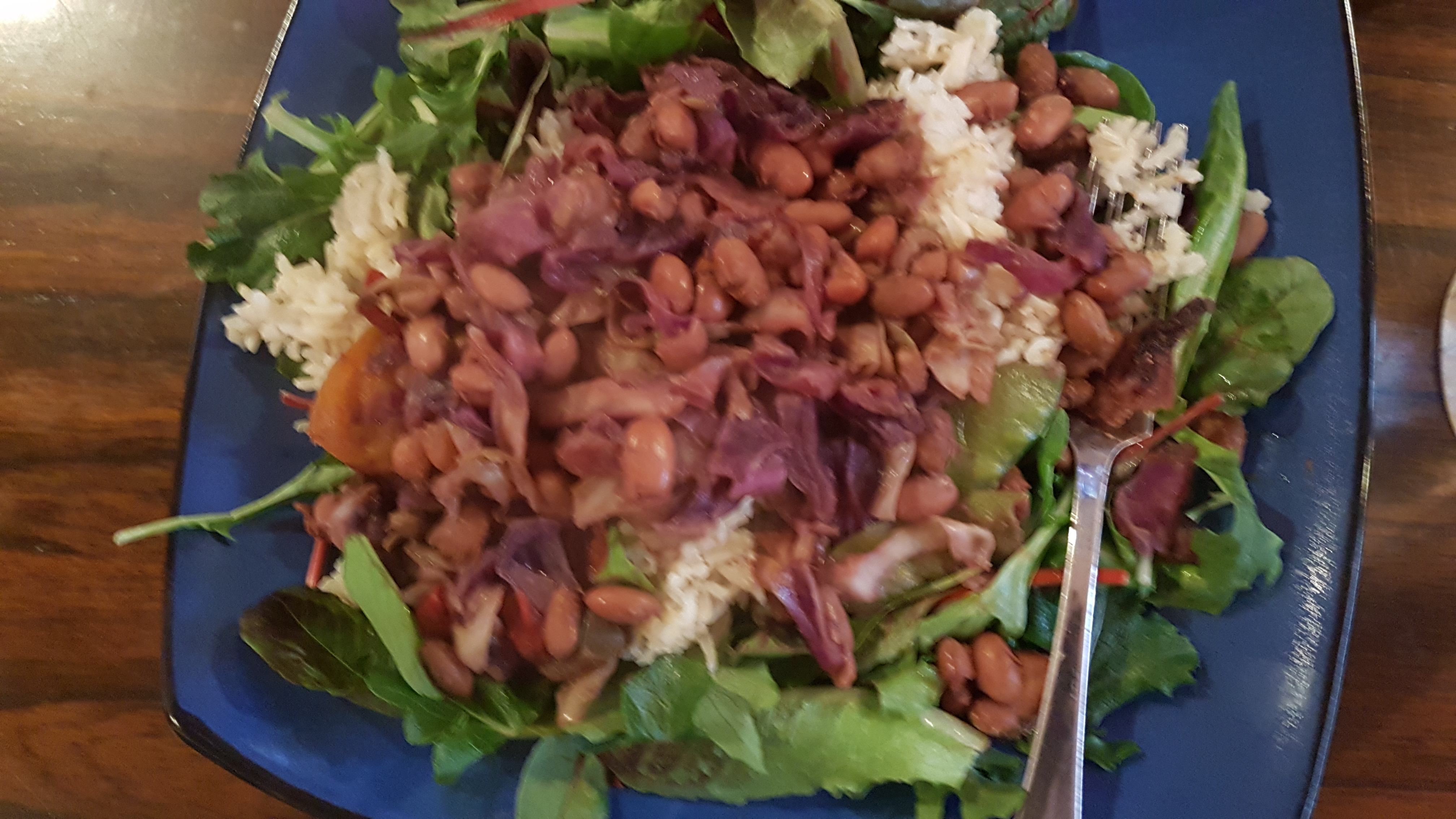 Breakfast – I love Hummusapien’s blog (if I lived in OH still I’d want to live in Columbus and be her friend) and got inspiration from her green smoothie. It included: “pineapple, banana, hemp seeds, kale, ginger, turmeric, black pepper, orange juice, and almond milk.”

So I actually had all those things, and blended them up (minus the black pepper because yuck), and boy. What an… interesting texture. Hemp seeds will no longer go in my smoothies. Now I know.

Lunch – Leftover split pea soup! This was thick and hearty and I could only eat like 2/3 of it and was totally full. Also I ran out of flax seed bread so I used a whole grain bun.

Snack – Crunchy oats & honey granola bar. I know, I know, this one is basically a candy bar because of how much sugar is in there, but desperate times, people.

Dinner – I had a multi-course dinner, because I marinated some veggies and put them in the oven to roast, but got hungry before they were done. So I started with an appetizer of cucumbers and turmeric hummus. 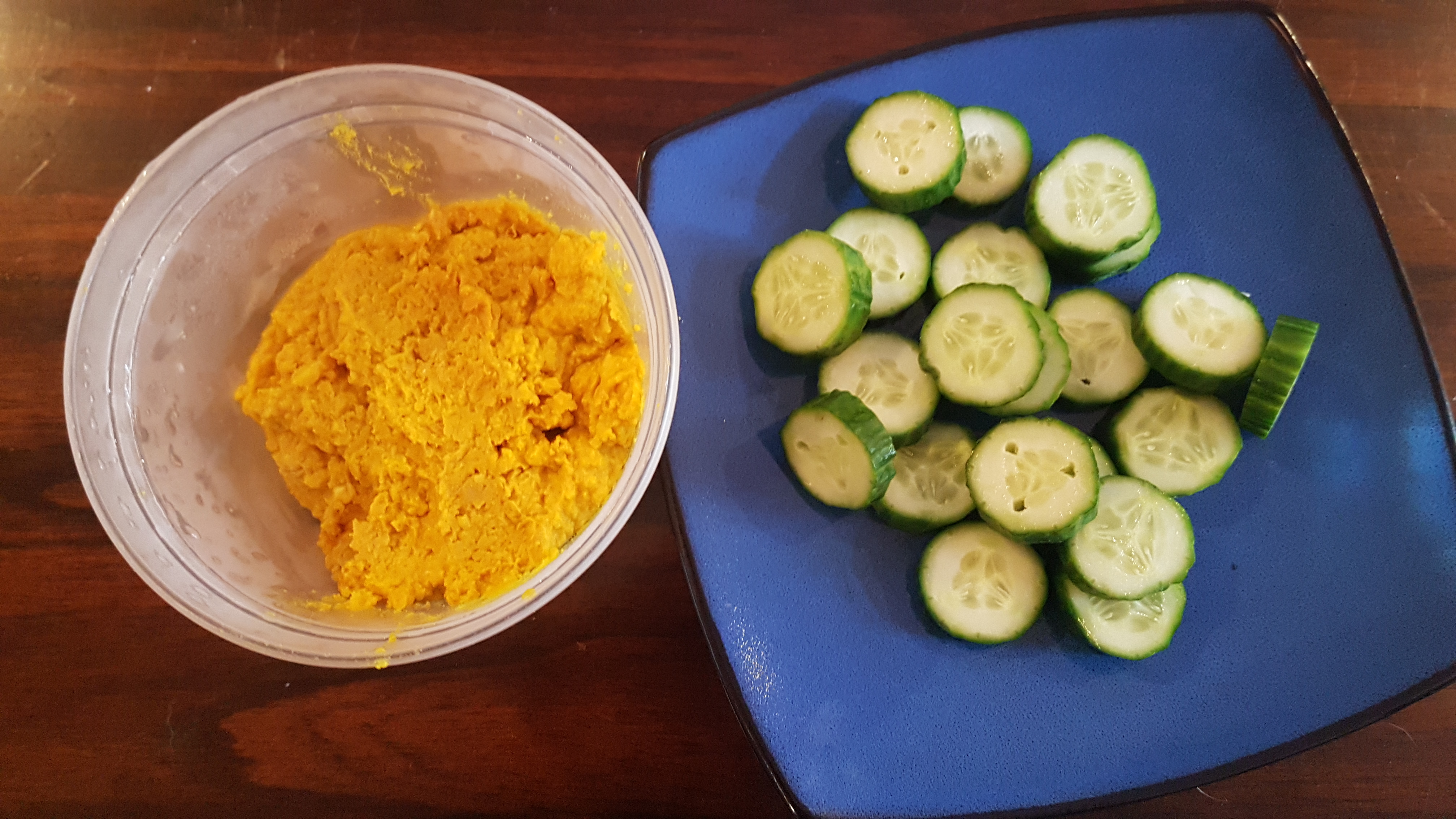 And then I had a salad with some hemp hearts and the rest of the marinade, which became salad dressing. In case you’re wondering:
1 tbsp apple cider vinegar + 1 tsp ginger paste + 1 tbsp honey + 1/2 tbsp olive oil.

And finally once they were done I enjoyed my roasted Brussels sprouts and carrots over rice.

And then I went out with some friends to Clouds Brewery in Durham! Clouds is amazing, if you’ve never been and enjoy trying different types of beer you need to go. They have a wall of taps, and you get a bracelet that you swipe on the screen to pour. Yes, you pour your own beers! And it charges you by the type and by the ounce, so you just turn your bracelet back in and it adds up your tab. Gotta love modern technology.

Friday is a holiday, woo hoo!

Breakfast – I knew I was going to lunch with friends, so I just had a small fruit and nut energy bar.

Lunch – We went to a place called Na’Mean, which is a Korean sandwich place in Durham. It is indeed slang for “know what I mean”. 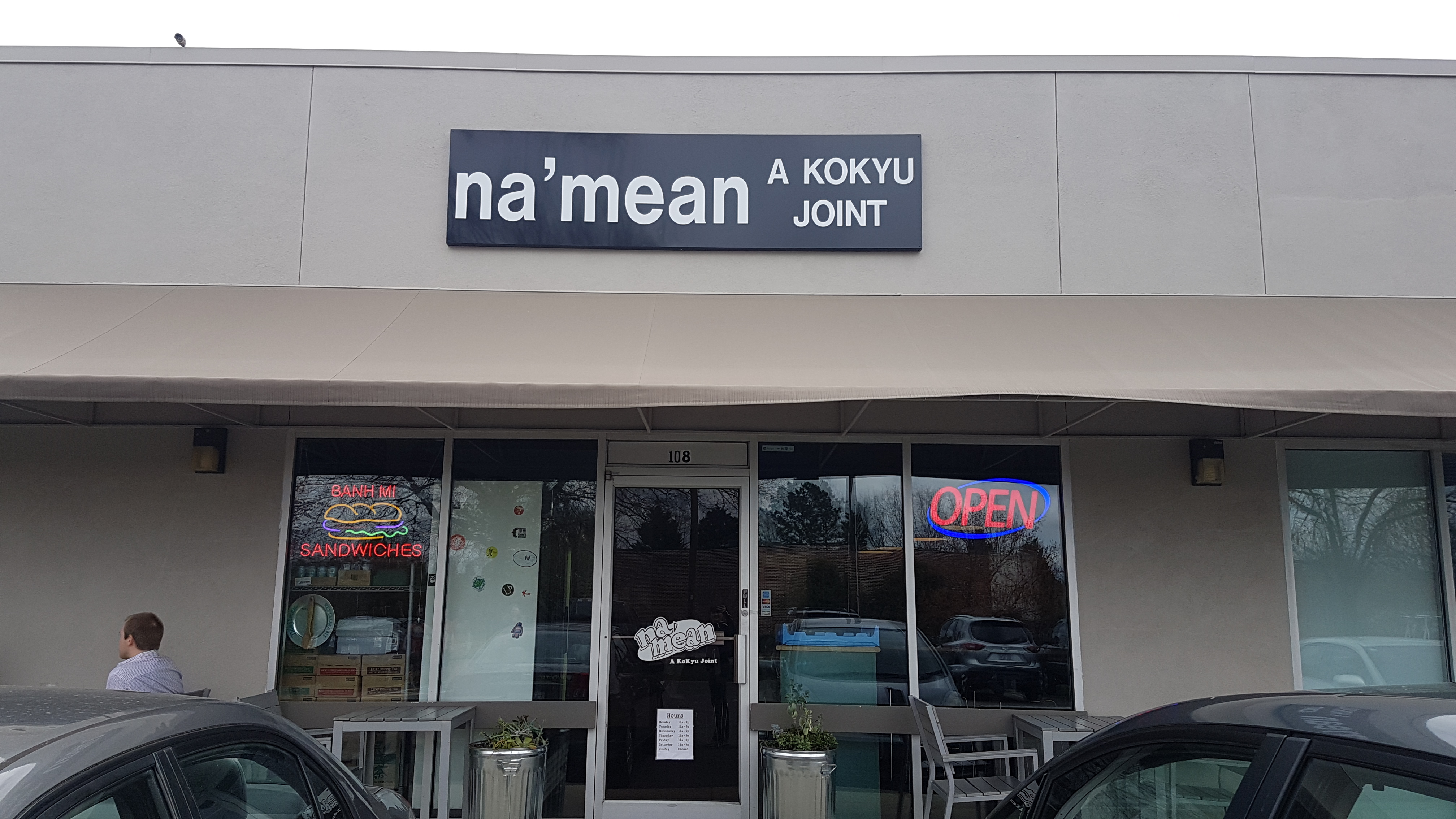 I got the Pork Belly Banh, which is a slice of crispy/soft pork belly on a banh roll with house pickled veggies, jalapenos, special sauce, pickles, and fresh cilantro. It was awesome! And the seaweed salad on the side made me swoon. I adore seaweed salad. 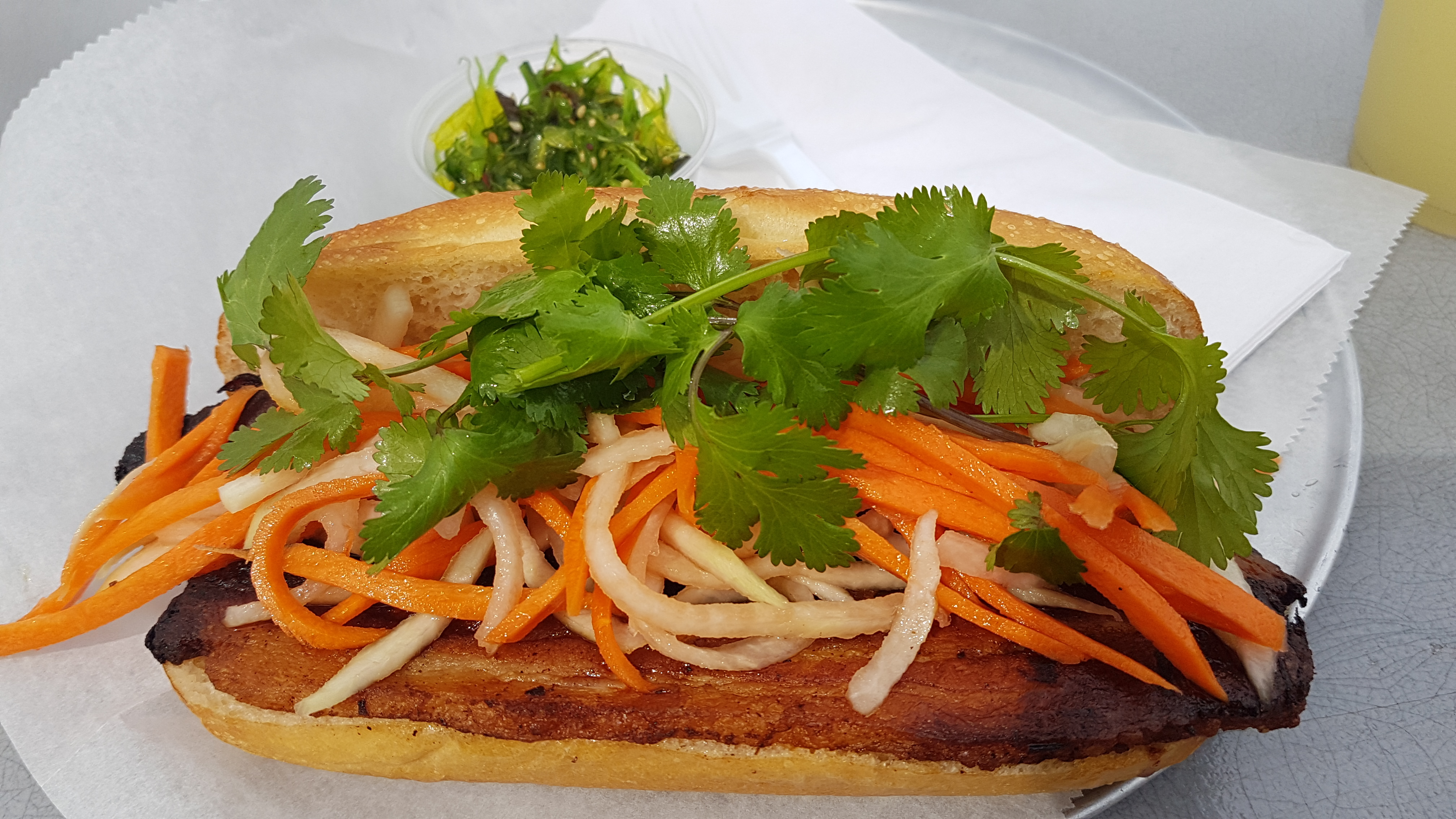 The place was right near an Asian grocery too… I know I promised no more groceries but… c’mon guys! I’m the Budget Epicurean! I had to go at least look around. And then buy some brown rice because we are out. And also the ingredients to make seaweed salad at home!

Dinner – Seaweed salad noodle bowl and steamed bok choi. I hadn’t had bok choi in a long time, so I picked up a small bag for $1, and the noodles were on sale: $1.99 for 3 pounds of rice noodles! 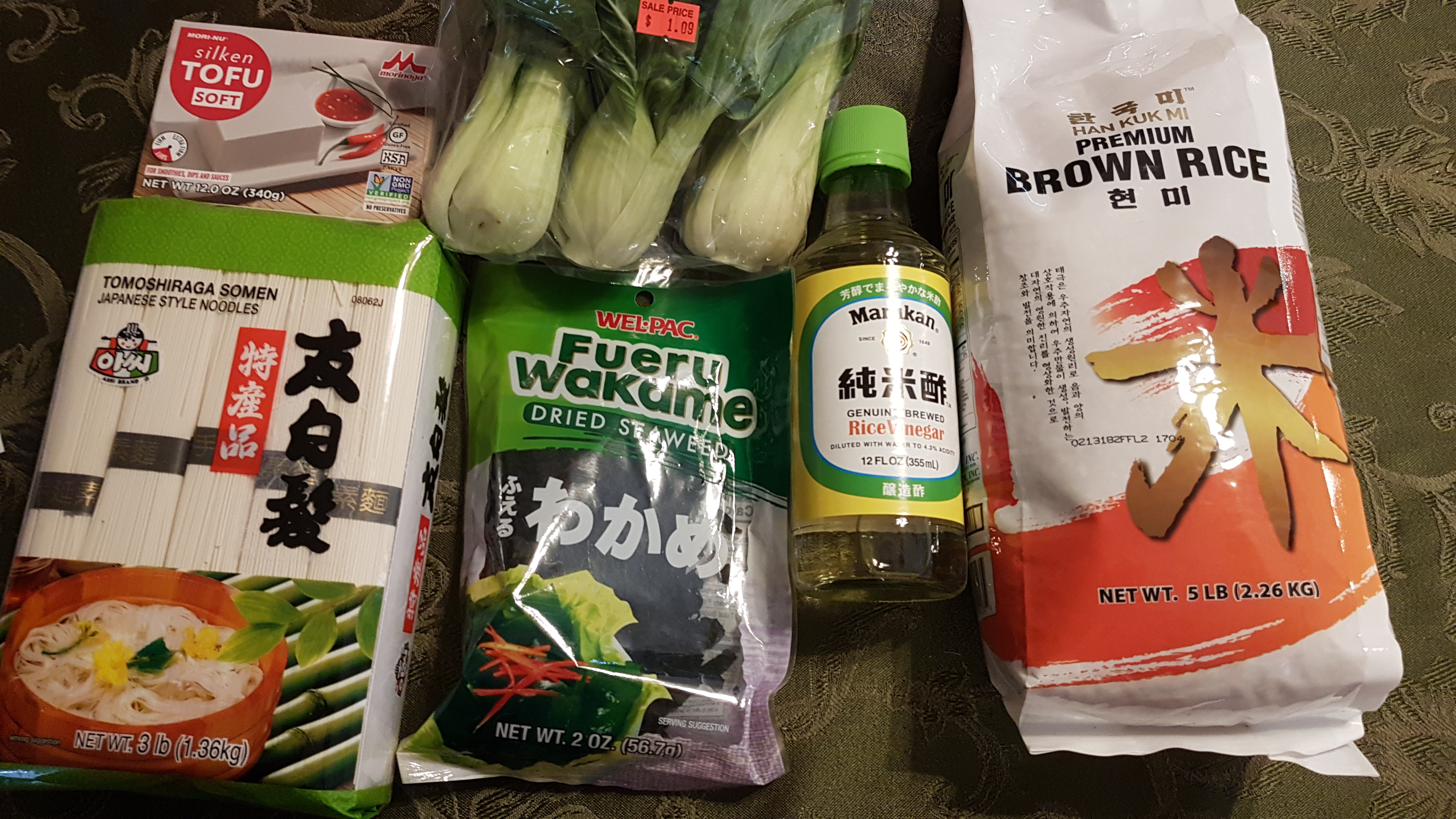 I have never cooked with seaweed until now. It’s really easy! Just soak to rehydrate, and then eat it. I added some edamame, and made a sauce from this recipe to pour over it all. Nomnomnom.

This weekend will be chill because the boy just had a stressful week flying for work and dealing with the cold in CT. We are considering hitting up a new brewery we heard about called Carolina Brewing Company. Rumor has it you get free beer on the tour… and/or maybe having a spontaneous game night with friends.

If we get really motivated perhaps I will even get the raised bed  garden set up, and some berry bushes. I’ve got it all planned out, we just need to go get the actual supplies: dirt, vermiculite, seeds, & plants. We shall see how we are feeling. I also need to meal plan, and prep some things for next week.

Remember how I said I wanted a low grocery bill this week?… yeah…

I had this whole game plan mapped out, and set up a calculator to count down from $75 so I knew how much was left of what I wanted to buy. I diligently compared ads and sales, and checked my cabinets and freezer before making any plans. 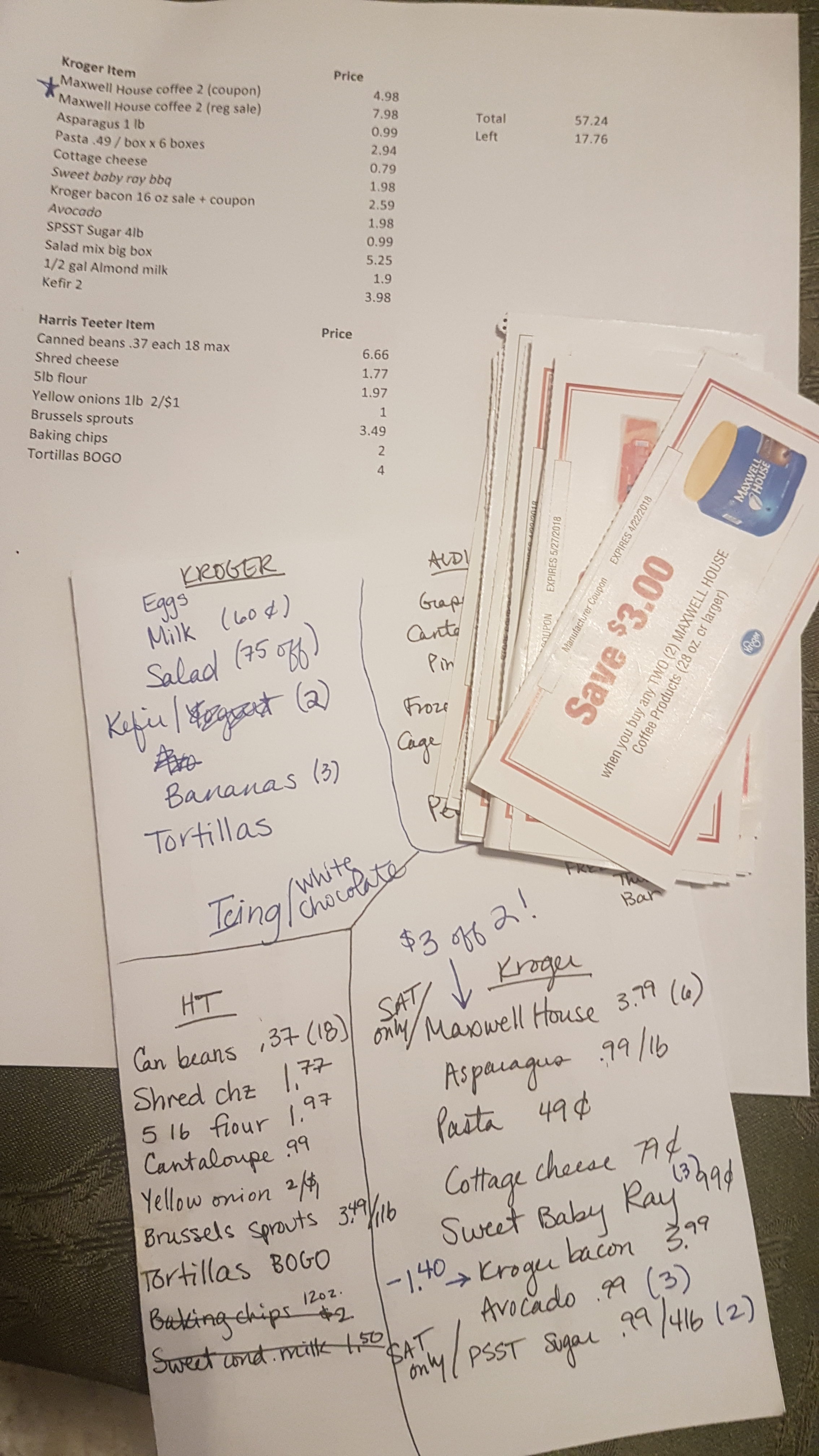 I thought I totally crushed it at Kroger, even with a few things I picked up here and there. My calculator told me even with all the planned purchases I had $17 left over for “splurges”. There was a great sale on coffee, and I had a $3 off coupon! Well… what I didn’t realize is I accidentally grabbed 4 cans of the wrong size… and the sale and coupon didn’t apply to them 🙁

I also picked up some organic chicken breasts and a small brisket roast to treat the boy. He was gone out of town all week on a work trip to CT. And let me tell you, Connecticut in March is not the most fun. IT WAS SO GOOD. I forgot how mind-blowing brisket is… But, I remain committed to the 80% vegetarian thing, going to keep trying. 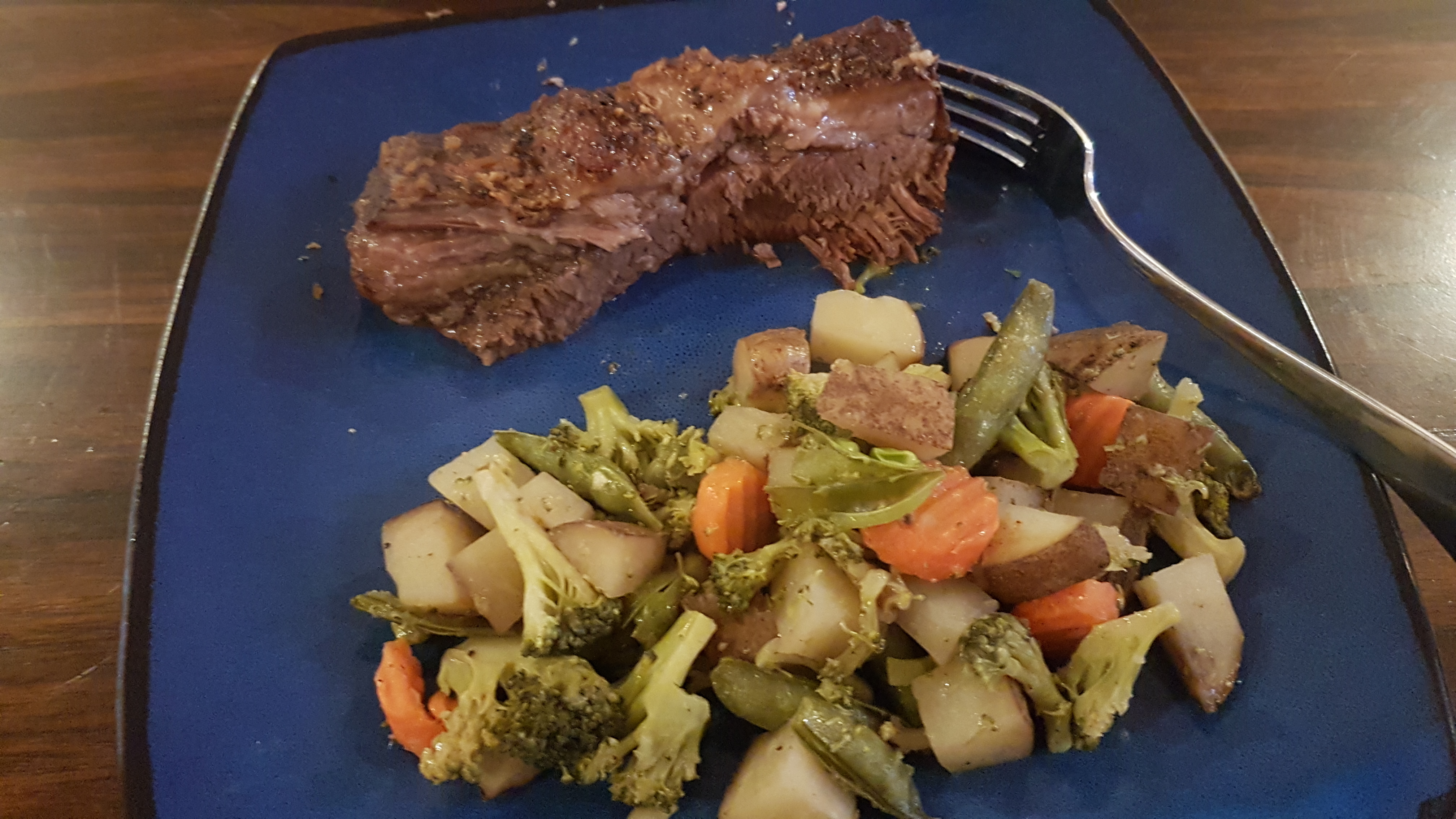 And then dried chickpeas were on sale for 0.99/lb! I cannot pass that up, since I use them so much in my homemade hummus and various salads. It is (almost) always cheaper per pound to buy dried, and I don’t mind the prep of soaking them overnight. I usually just toss some sort of bean in water overnight on a Friday or Saturday, then use my slow cooker all day Saturday or Sunday. Easy peasy, I have cheap protein ready for all week.

To be fair, the Moscato was a hostess gift for the person who planned the baby shower I went to, and the diapers and wipes were a gift for the couple, obvs. Also in good news, the cake pops were a HUGE hit! Who knew. 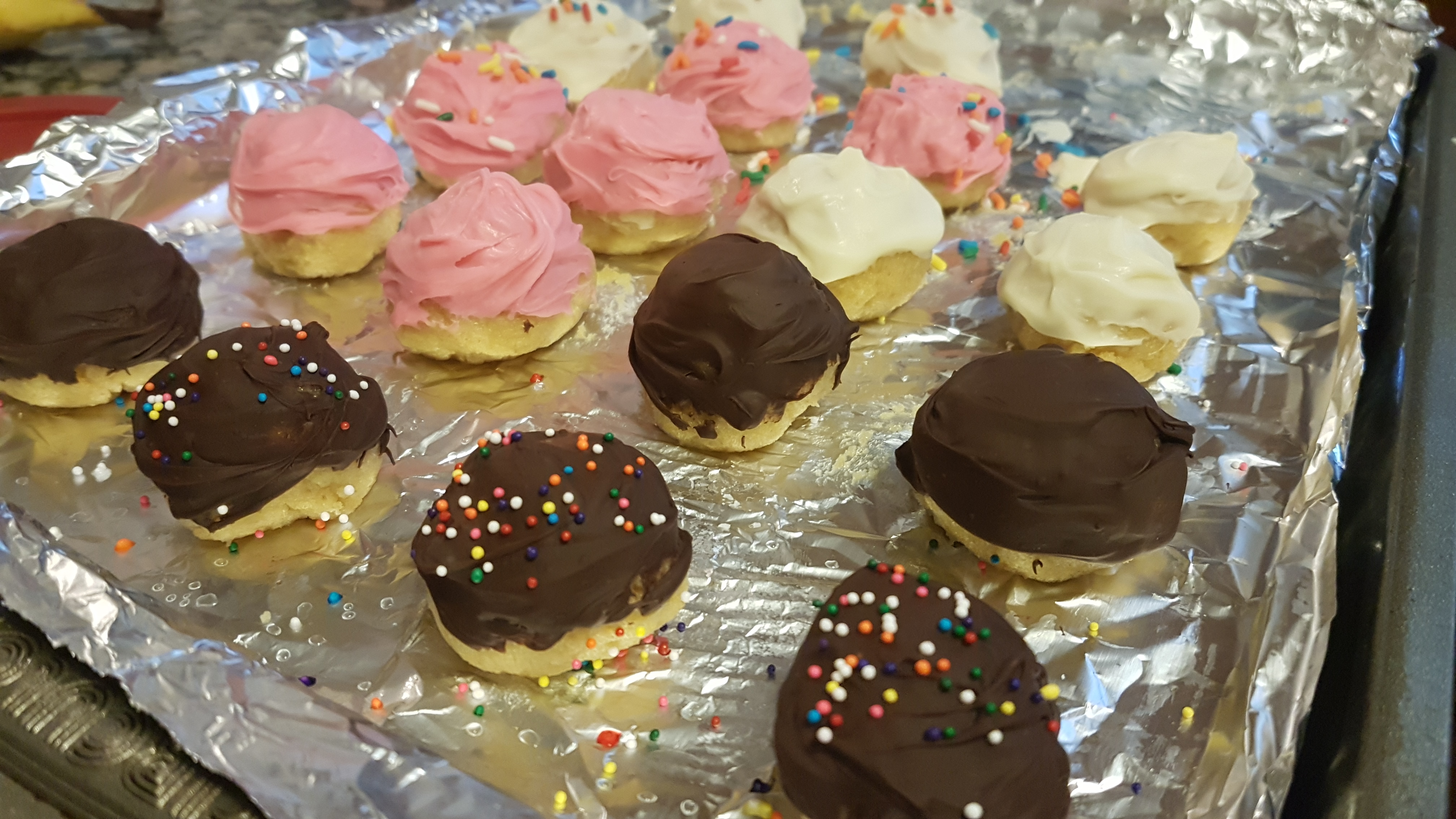 When I have a very specific list, it might be better to send in the boy. He hates grocery shopping, and will whip in and out of the store in the time it takes me to just look around the produce section.

That’s not a bad idea actually…grocery shopping to me is like a game, an adventure to find the best deals. I almost always wind up with some purchases I didn’t plan on. Of course, they are also almost always justifiable (crazy mark downs, actually the best sale price I’ve seen all year, etc.) but still… unplanned for $ spent.

Anywho, the point is, I definitely went over my desired goal of $75, and my stretch goal of $100. Again. Meaning March was wayyyy over the $400 total I’m supposed to spend. Sigh. No more food shopping until April, that’s for sure. I’m determined to do better next month. Maybe the boy really will become the default shopper.

I definitely learned the importance of cleaning out the refrigerator now and then! There were tons of little odds and ends and leftovers that I ate this week. Good thing the boy left for a while, it was mostly the soups and veggie options! 🙂 But clearing out your refrigerator and rearranging every week or every other week is a great habit to start. It reminds you of what leftovers are around and what other ingredients you have to work with for the next coming week.