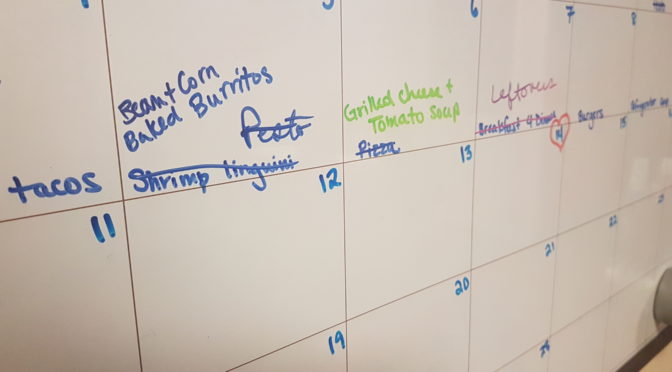 So remember that sweet deal on a waffle maker I got last weekend? Well, this past weekend I decided to go big, and made a huge batch of sweet potato waffles! The recipe made 14 big, fluffy waffles, which we happily ate 4 of and then I packaged the rest into Ziplocks for the week’s breakfasts. 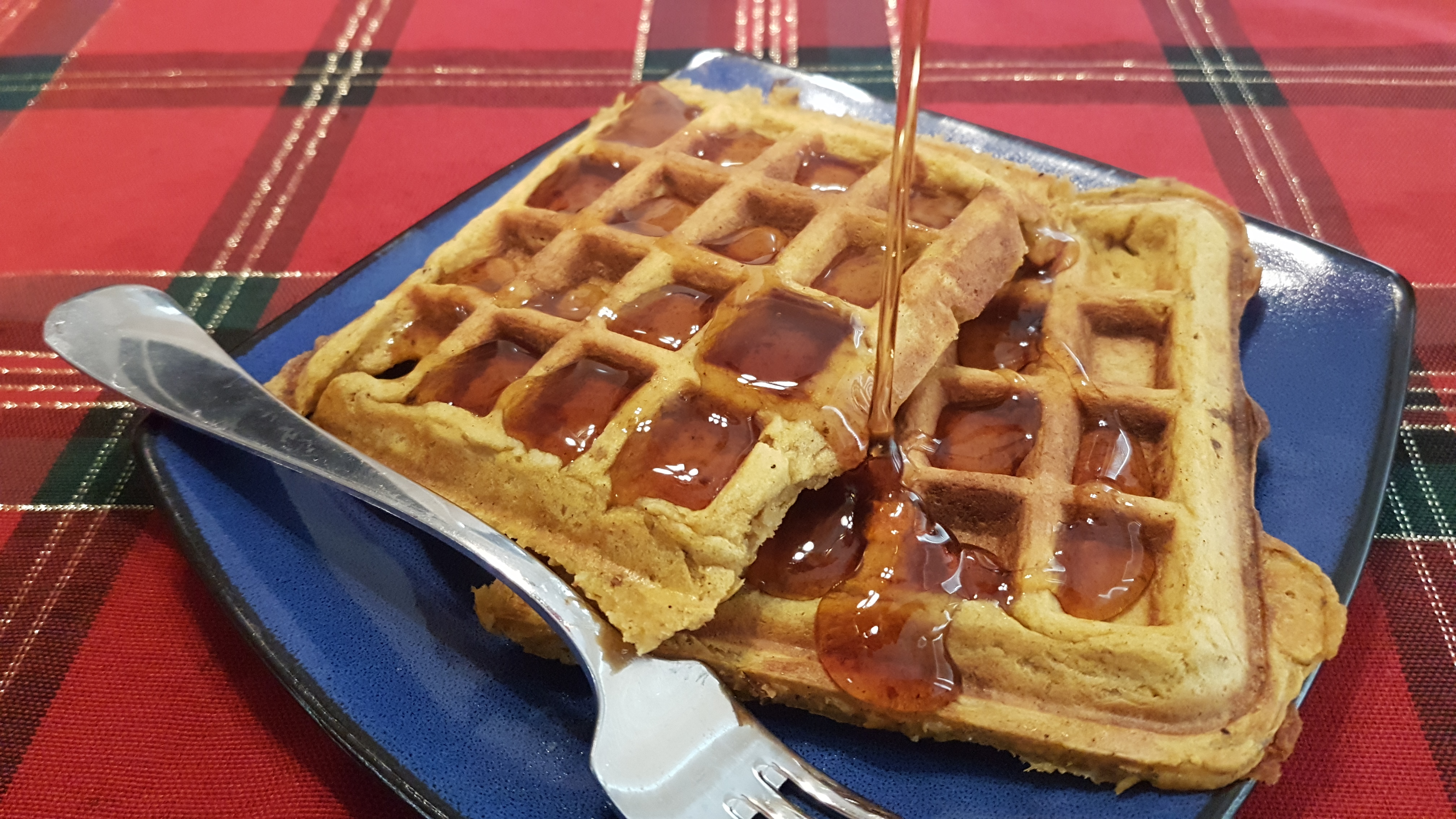 For lunch, we decided to explore a bit, and ended up at a pizza place in Chapel Hill called Magone. I got a “small” bacon ranch pizza, and this thing was ‘UGE! And delicious. And filling. The boy couldn’t even manage more than 3 slices of his Hawaiian. I ate 2 slices, and took the rest home, so there was a ton of pizza left over. 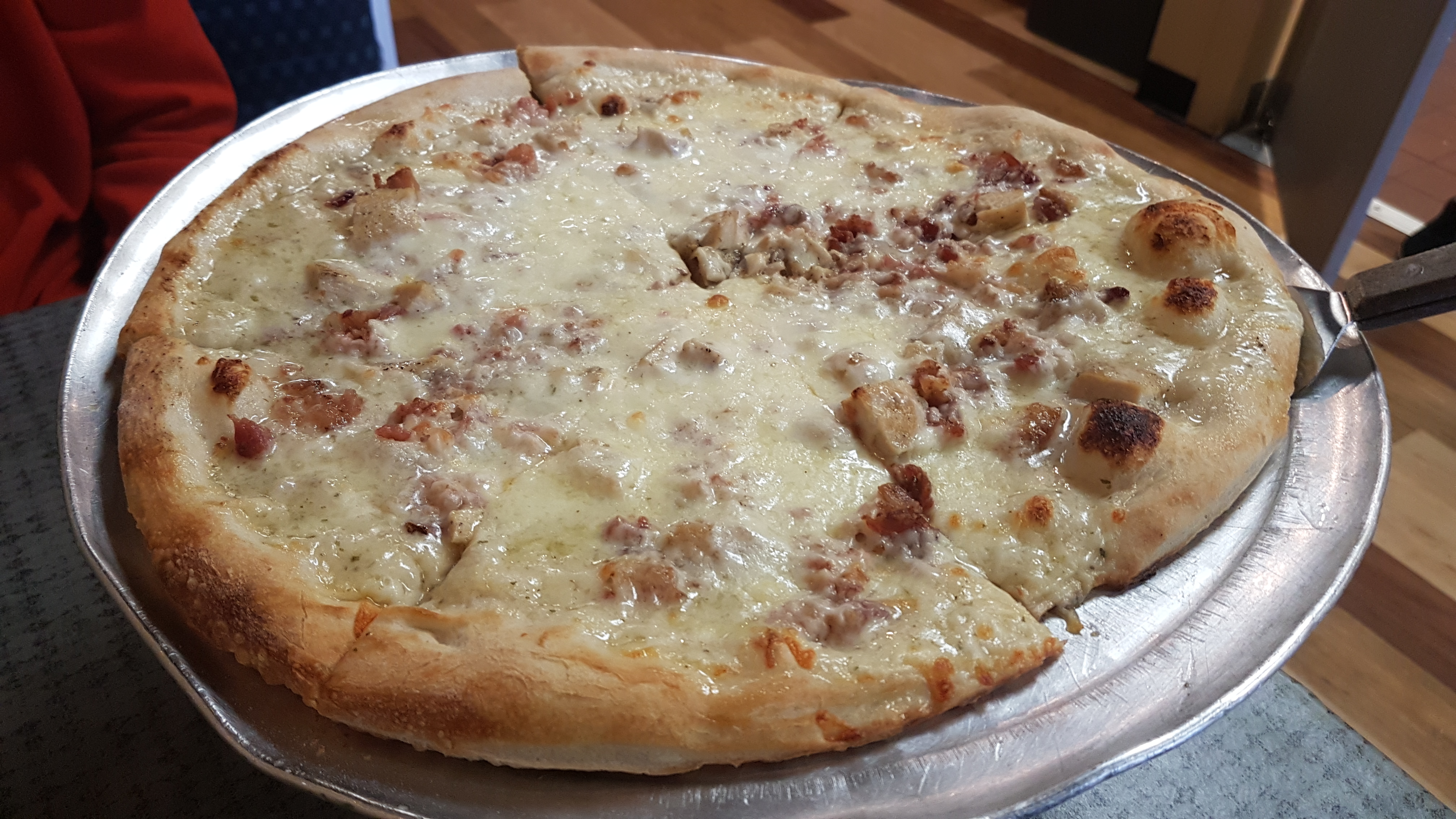 Breakfast – Sweet potato waffles! I’d tried reheating in the microwave, and it made them kinda soft and mushy. So I heated them in the toaster, and that came out perfect! New fave breakfast for sure. 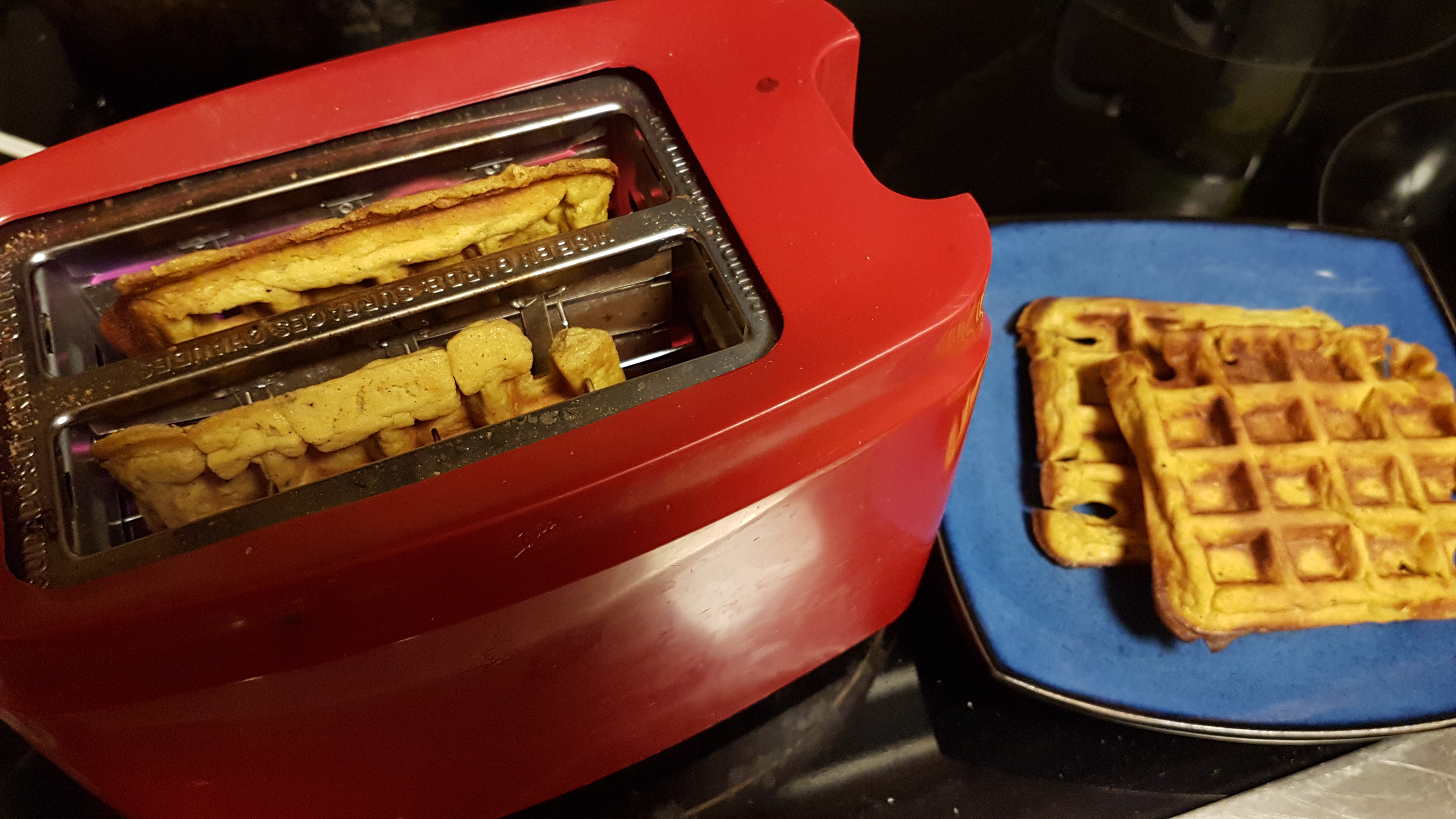 Lunch – Veggie chili; I made a big ol batch in the Crock Pot with dry beans I’d soaked overnight. We had plenty for dinner, and I packed up the leftovers into several containers. 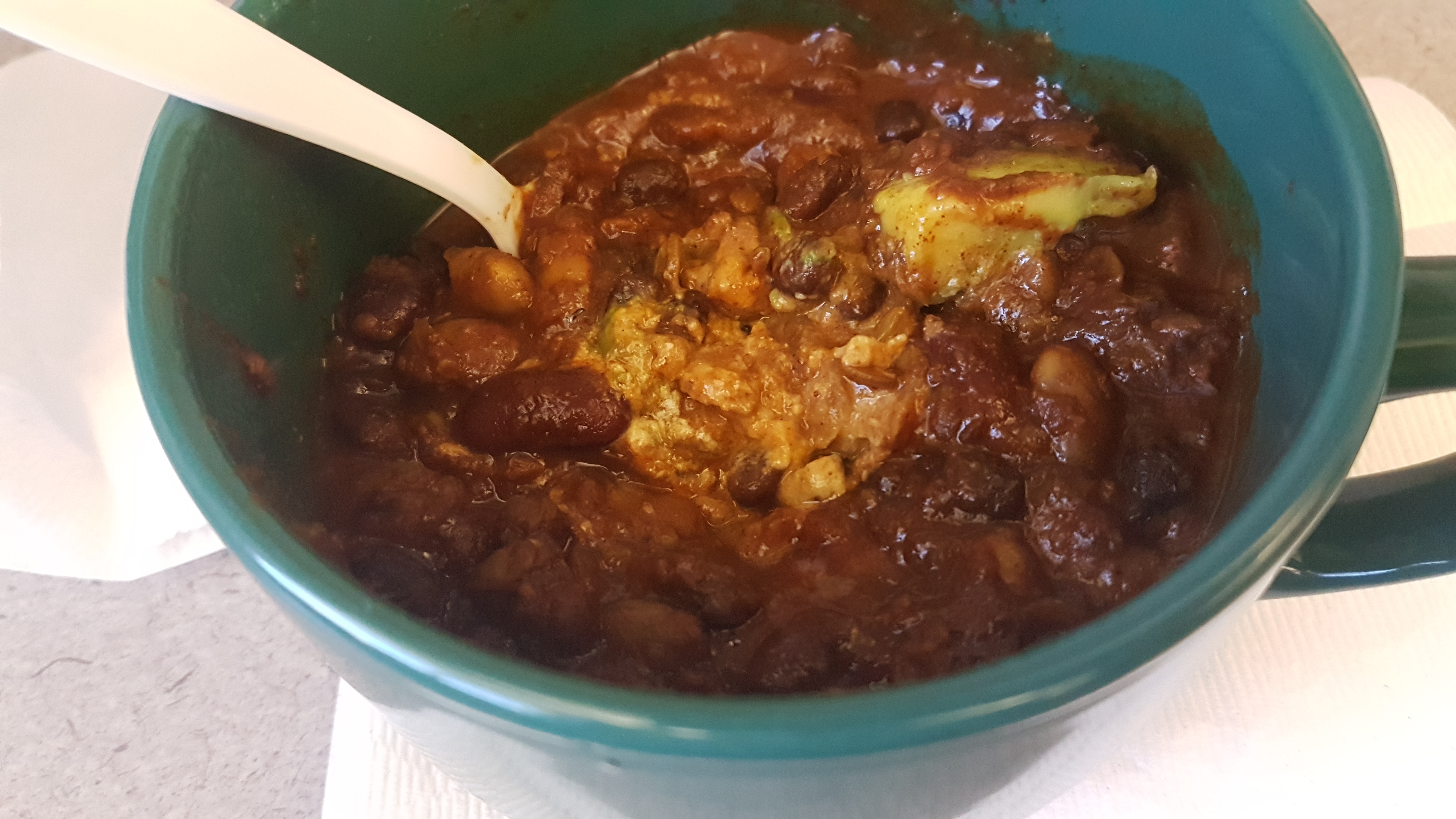 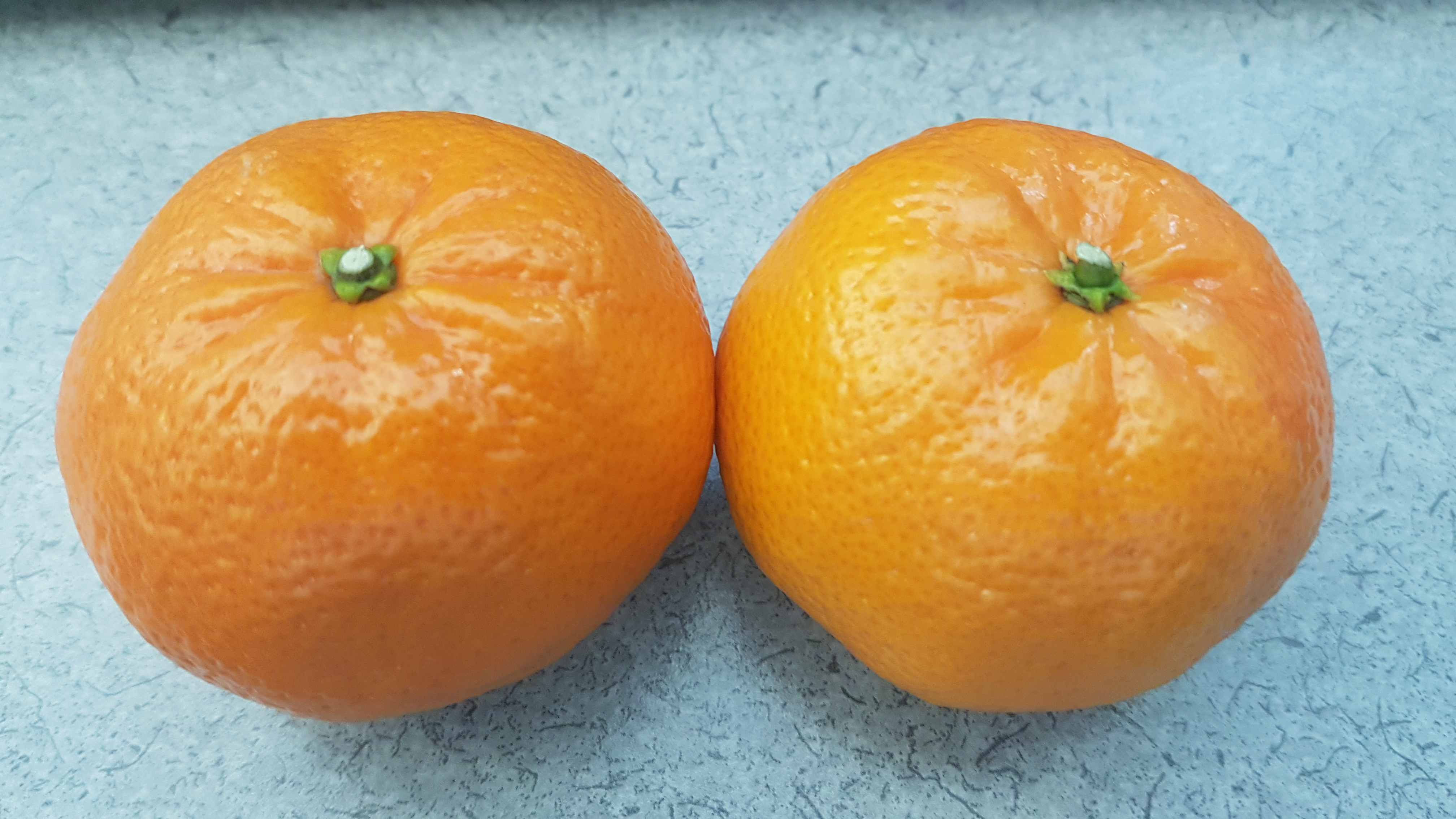 Dinner –Black bean & corn California burritoes, with some purple cabbage for color and baked in the oven for crunch. 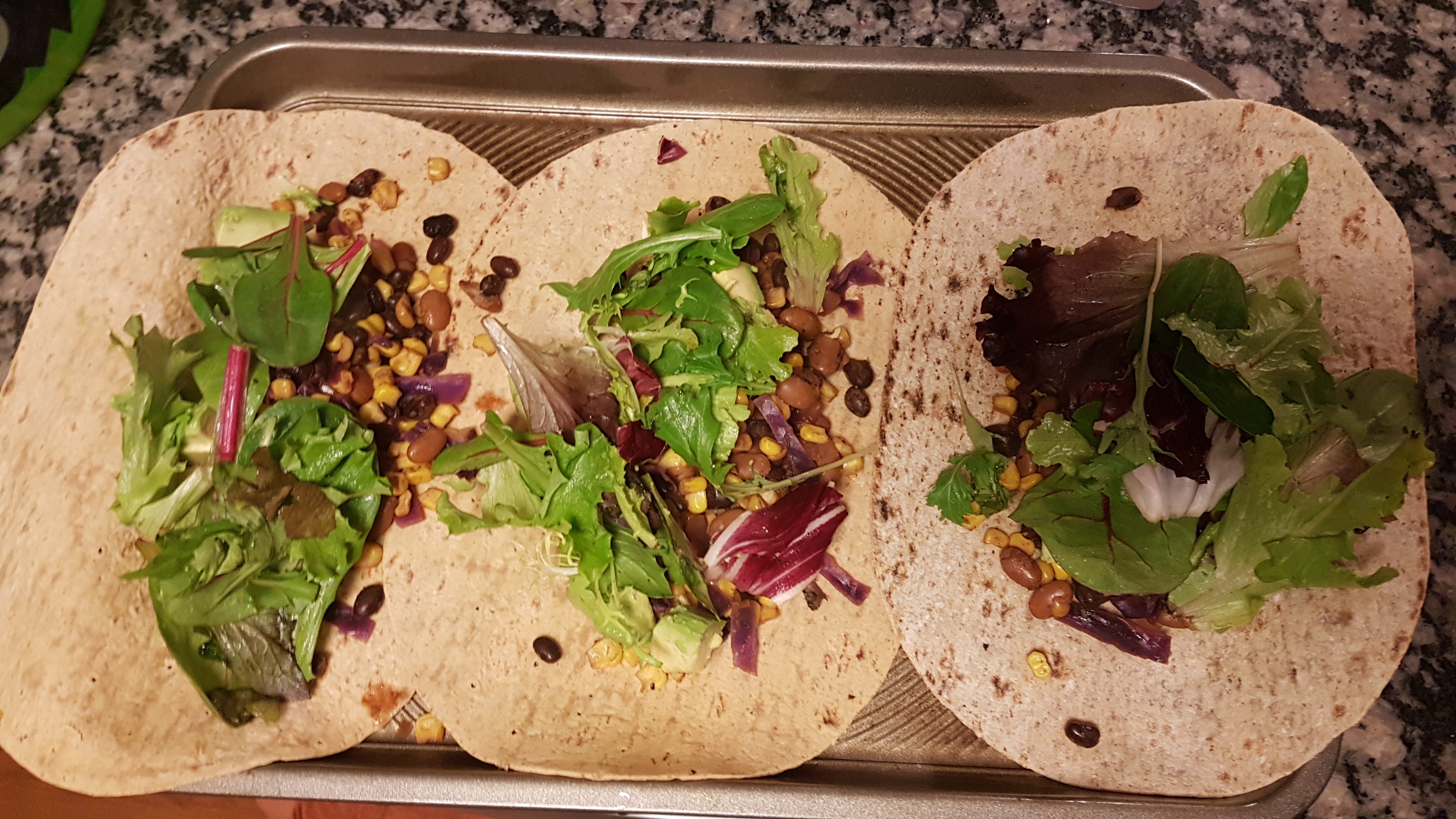 I thought I did a pretty good job wrapping, though one ripped a bit, but I’m not nearly as expert as Cheesy Finance 🙂 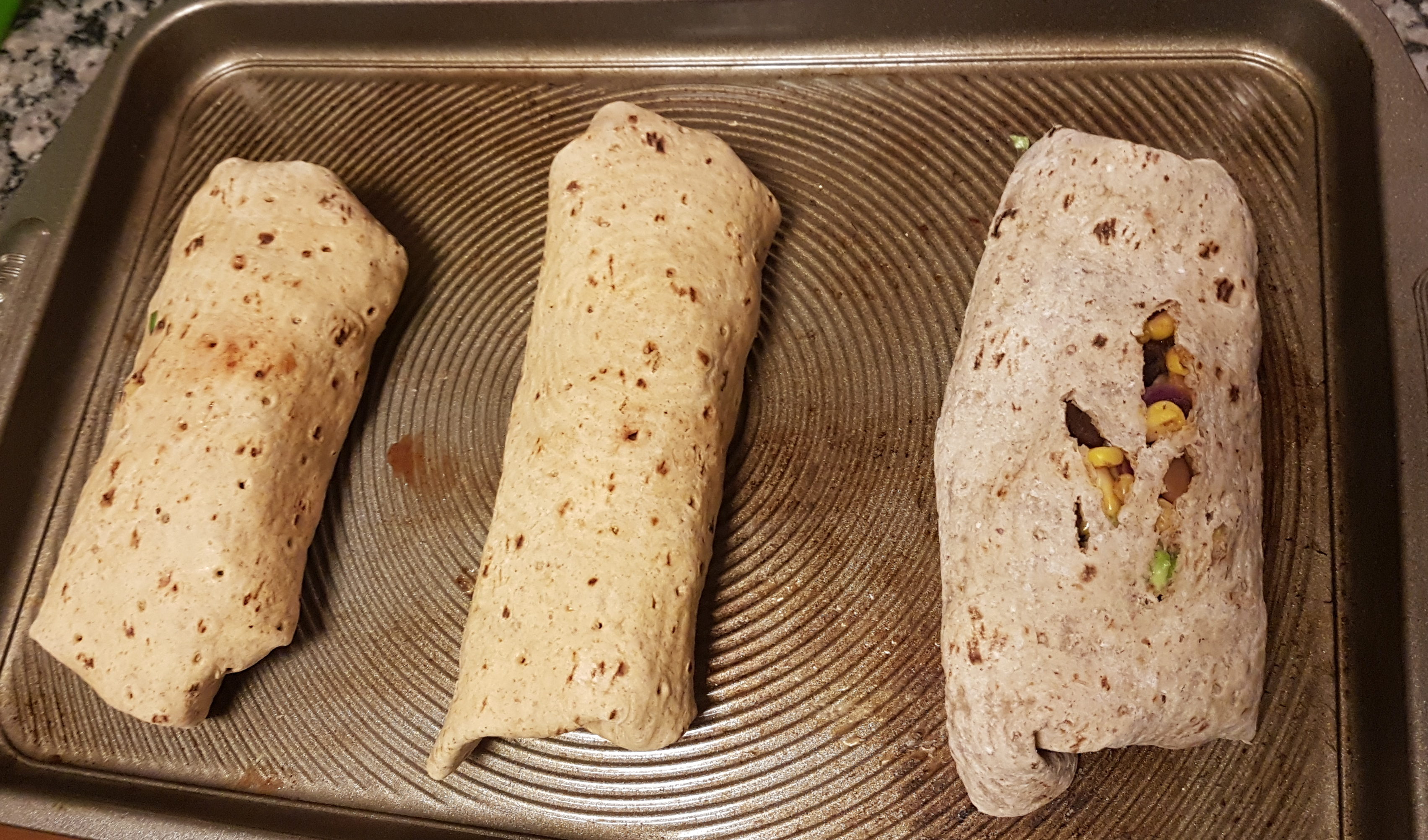 All day Monday I had a dull ache in my abdomen, thinking it was just hunger or a stomach ache. It turned into roaring cramps by the end of the day, and I was unprepared. On a suggestion from a friend, I wanted to use a heating pad, but we don’t have one. So google said, make one from putting rice in a sock! 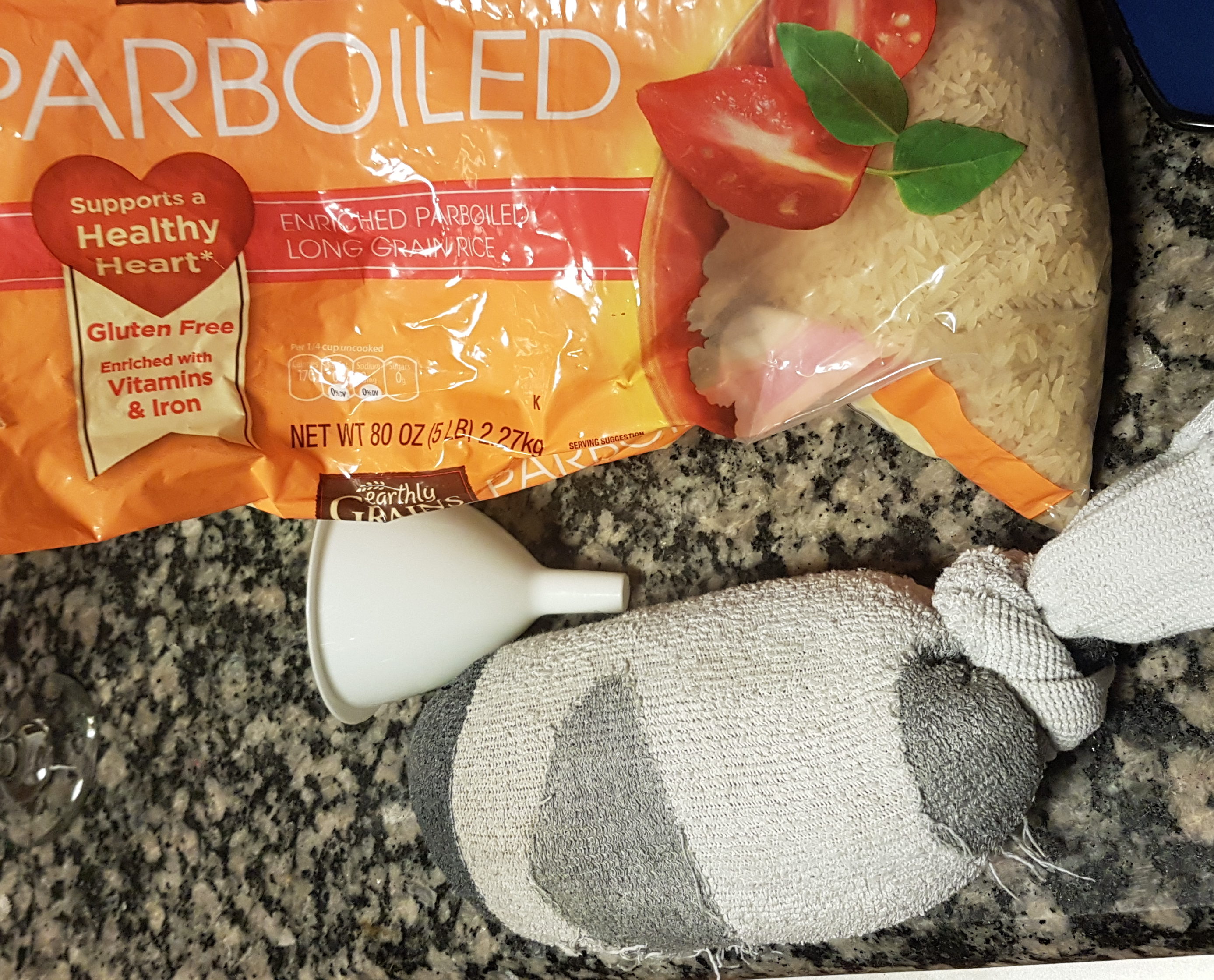 I’m here to say that it actually does work. I used a funnel, and filled up hubby’s sock with rice. Microwaved for 1 minute at a time, 2 or 3 times, it holds heat for quite a while. However, microwaved sock rice smells very weird. And hubby refuses to eat it after I’m done with it… so that’s a waste of 2 cups of rice! Haha (Would you eat sock rice?)

Breakfast – I slept poorly and my body was still confused, so I didn’t know what to do about food. You know how some days, every thing you think of your stomach is like “Nah, I don’t want that”. I almost made toast, almost made eggs, almost had waffles. I made some sauteed greens because for some reason it sounded good, but that wasn’t enough. So I added it as a topping on the leftover pizza. 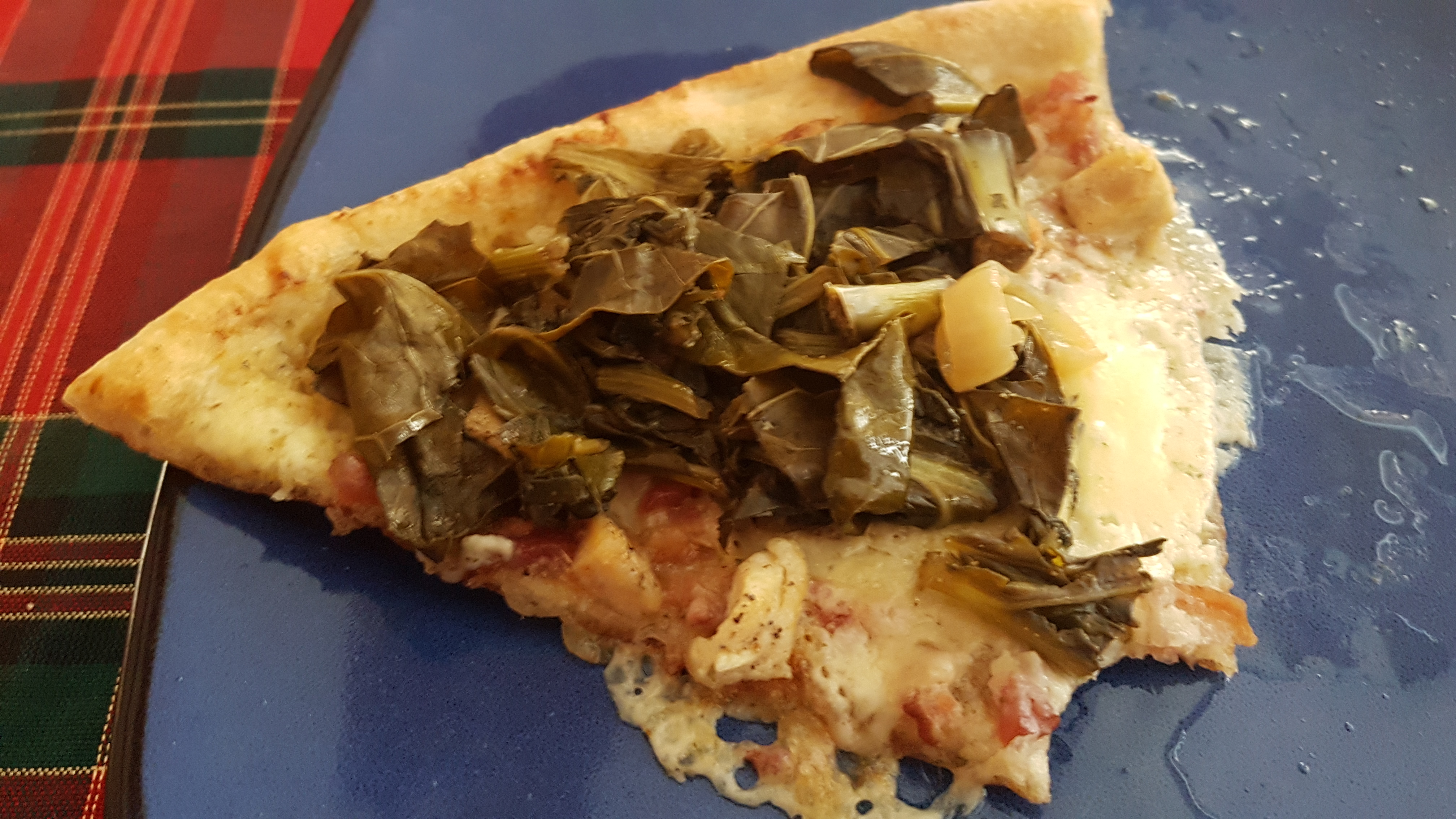 Lunch –Can of chicken noodle soup. Nothing exciting, just needed to have some calories and still wasn’t hungry. 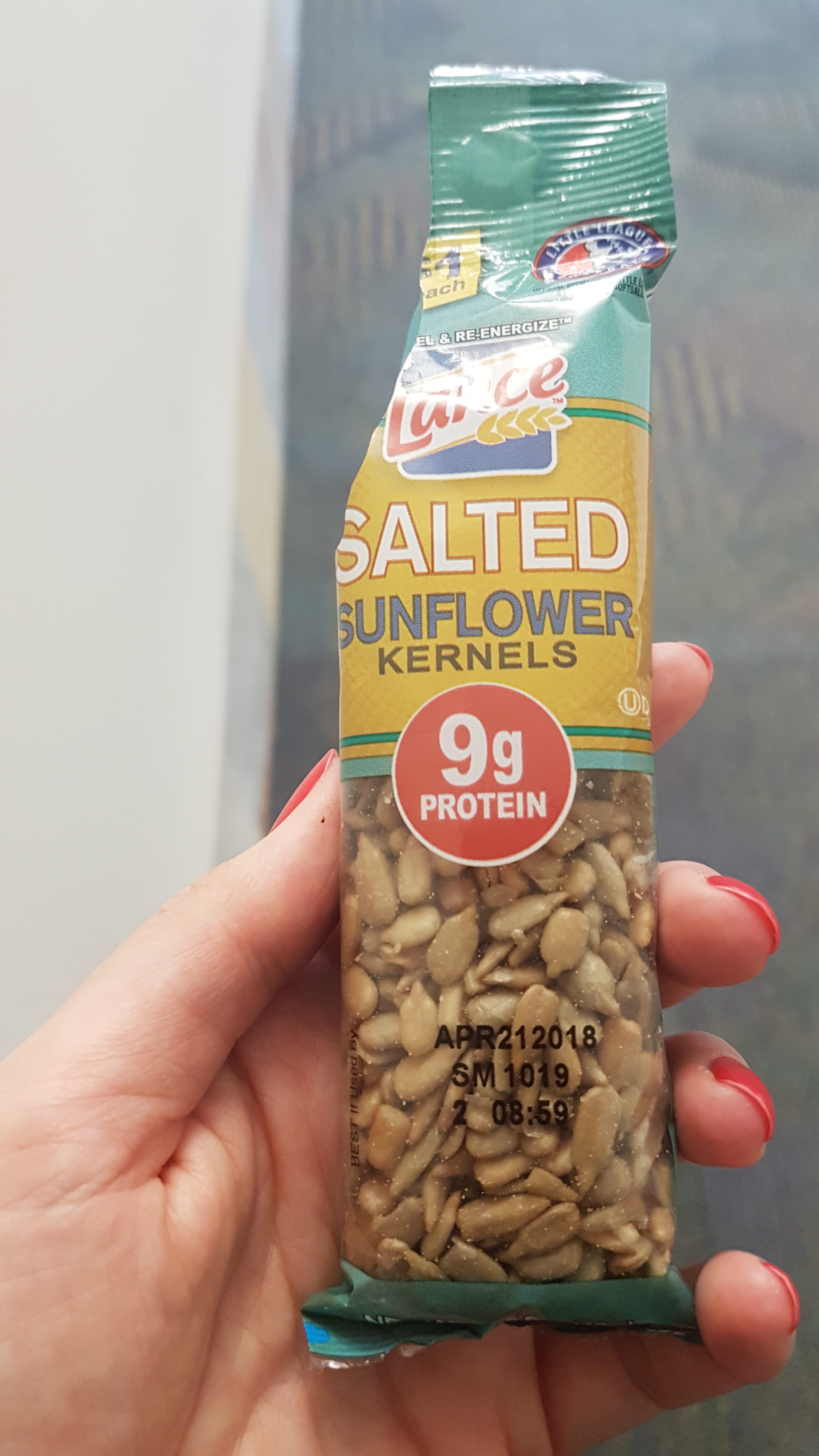 Dinner –Tomato soup & grilled cheese with leftover tomato juice from the chili and some freezer pesto. Pesto is one of my favorite secrets to delicious and layered flavors in a simple tomato soup. 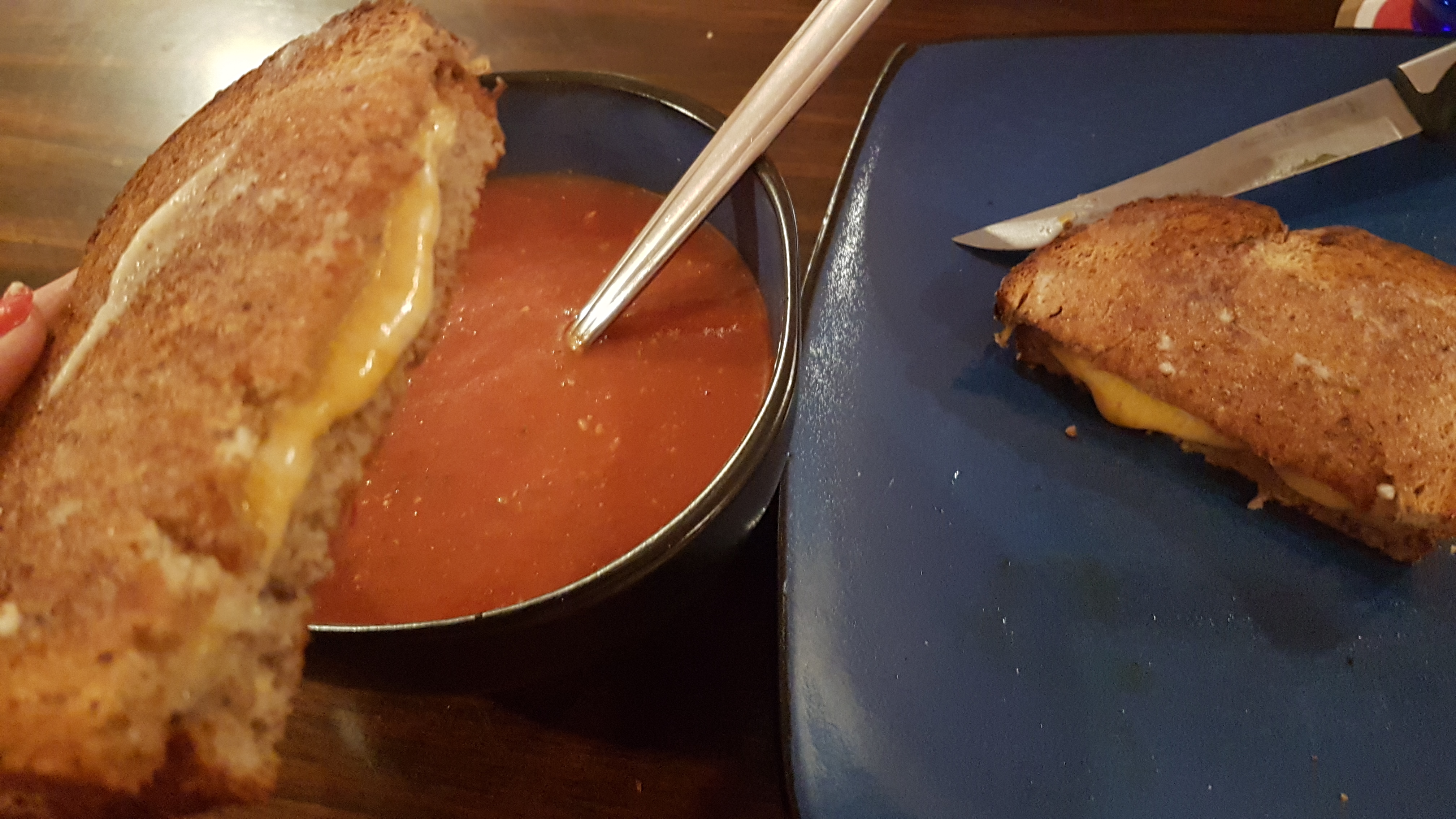 Breakfast –Tropical smoothie; and this finally used up the rest of the frozen fruit mix I don’t like! 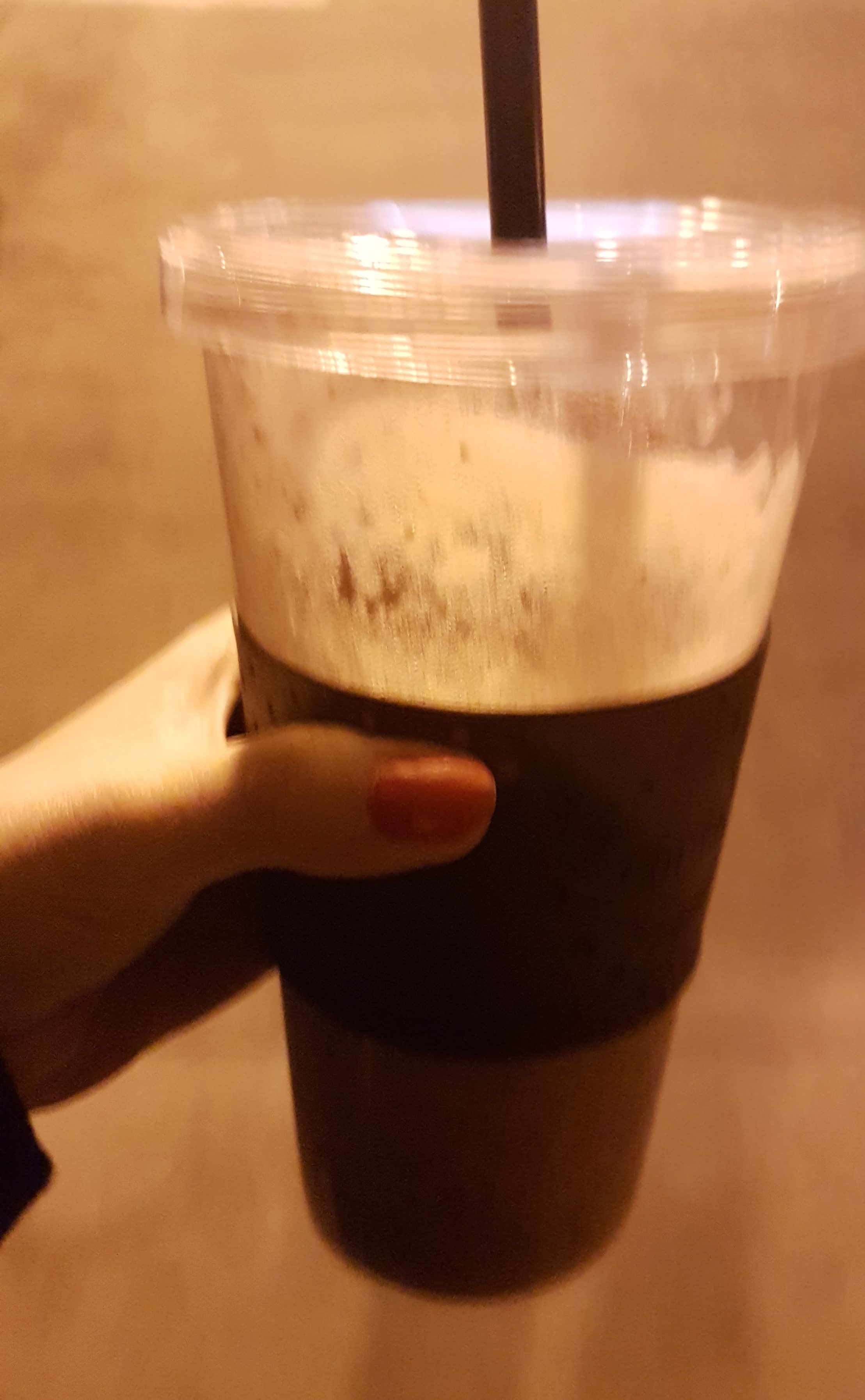 Lunch –Chili! With some mixed steamed vegetables on the side. 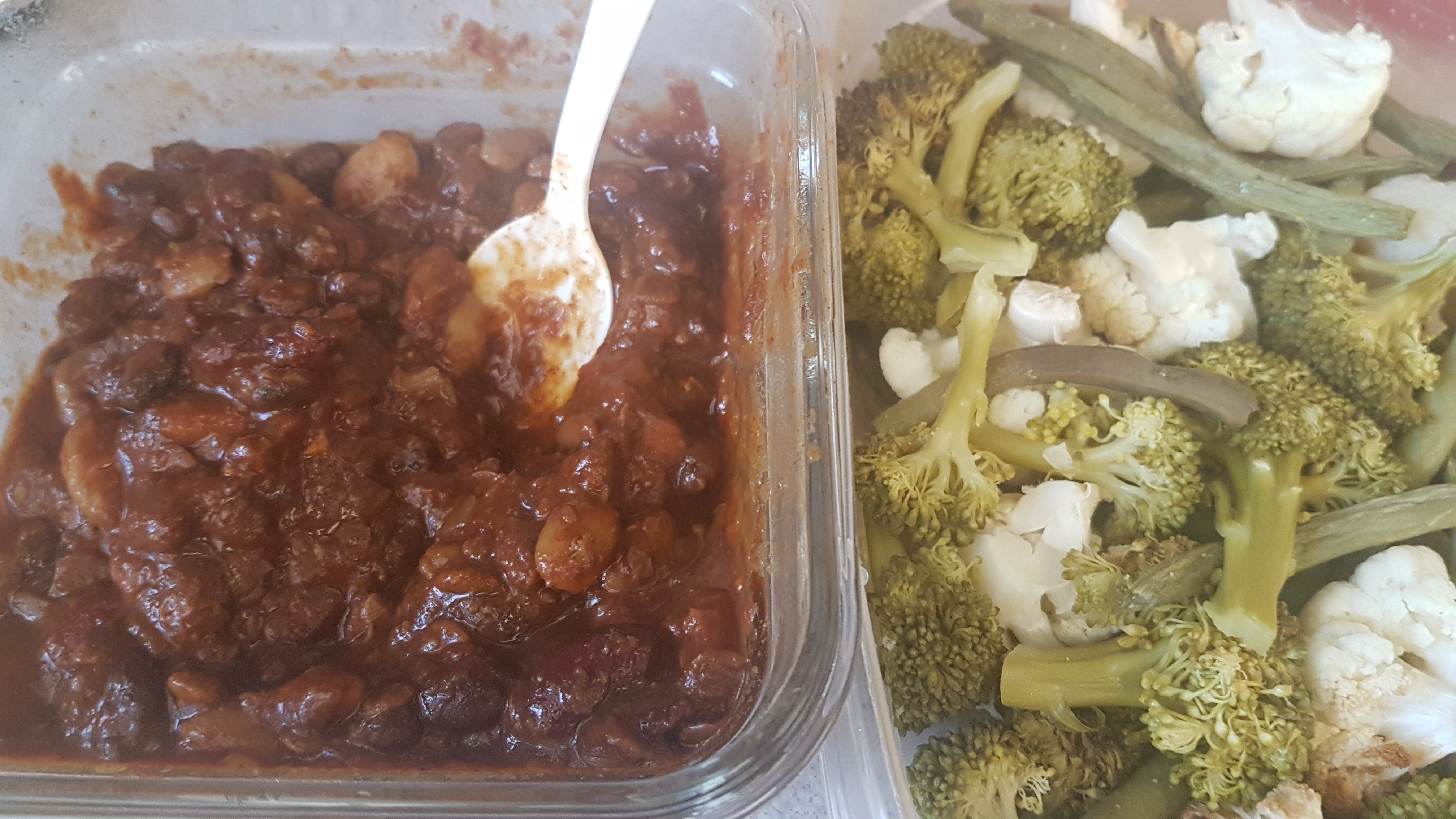 Dinner –I met up with a new friend after work at Starpoint Brewery/ Beer Study in Durham, and had a Chocolate Stout that was seriously amazing. It tasted sort of like a chilled hot cocoa, but with beer in it. It was worth every penny of the $8 for a 16 oz glass. When I finally got home, I didn’t feel like cooking, so I had more leftover pizza; at least I added some greens on top. 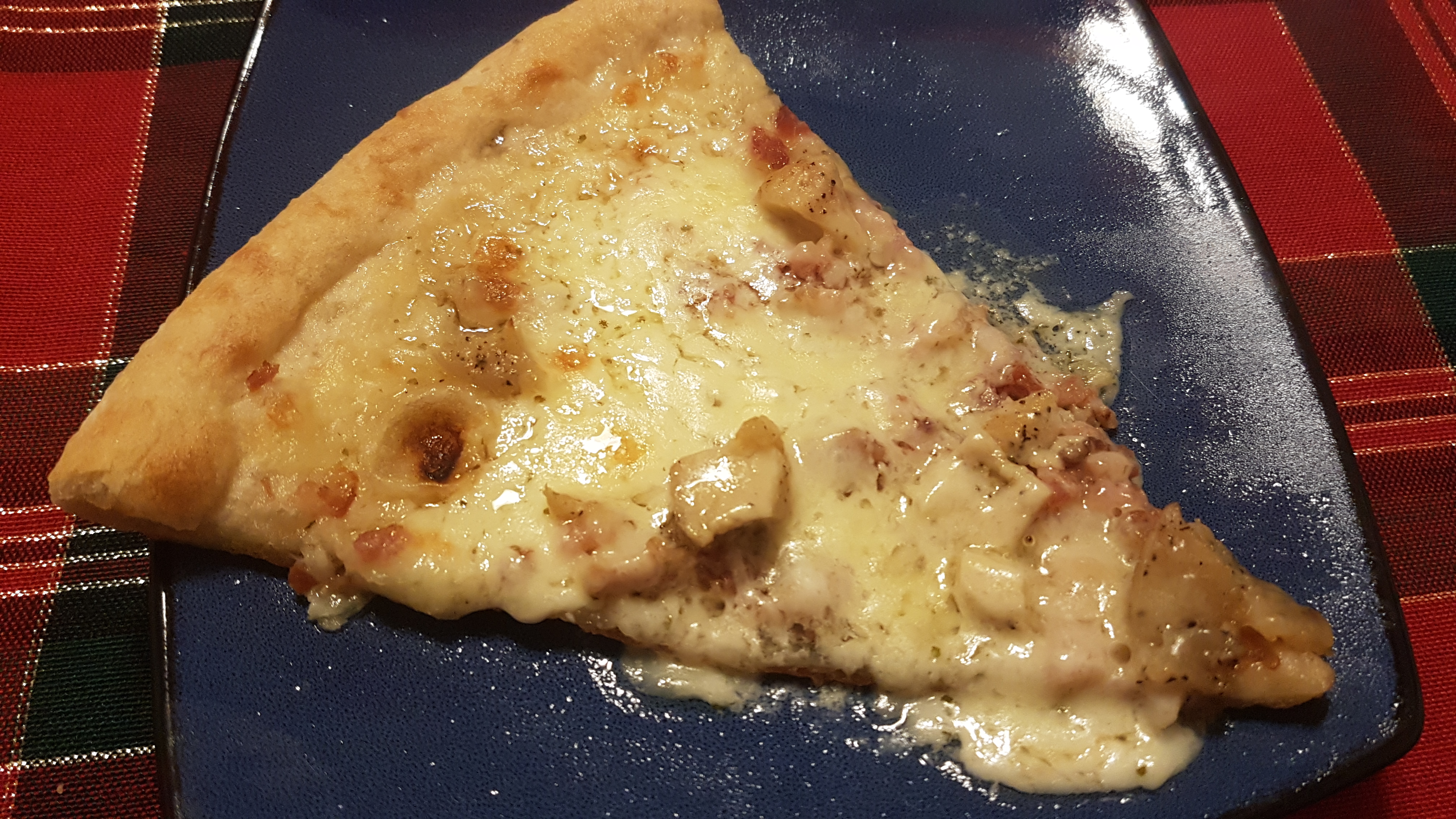 Snack –Pineapple & cucumber. Cucumber isn’t the best alone, I should have made some hummus to dip it in. They were also close to going bad, so the other container I decided to quick pickle for later. 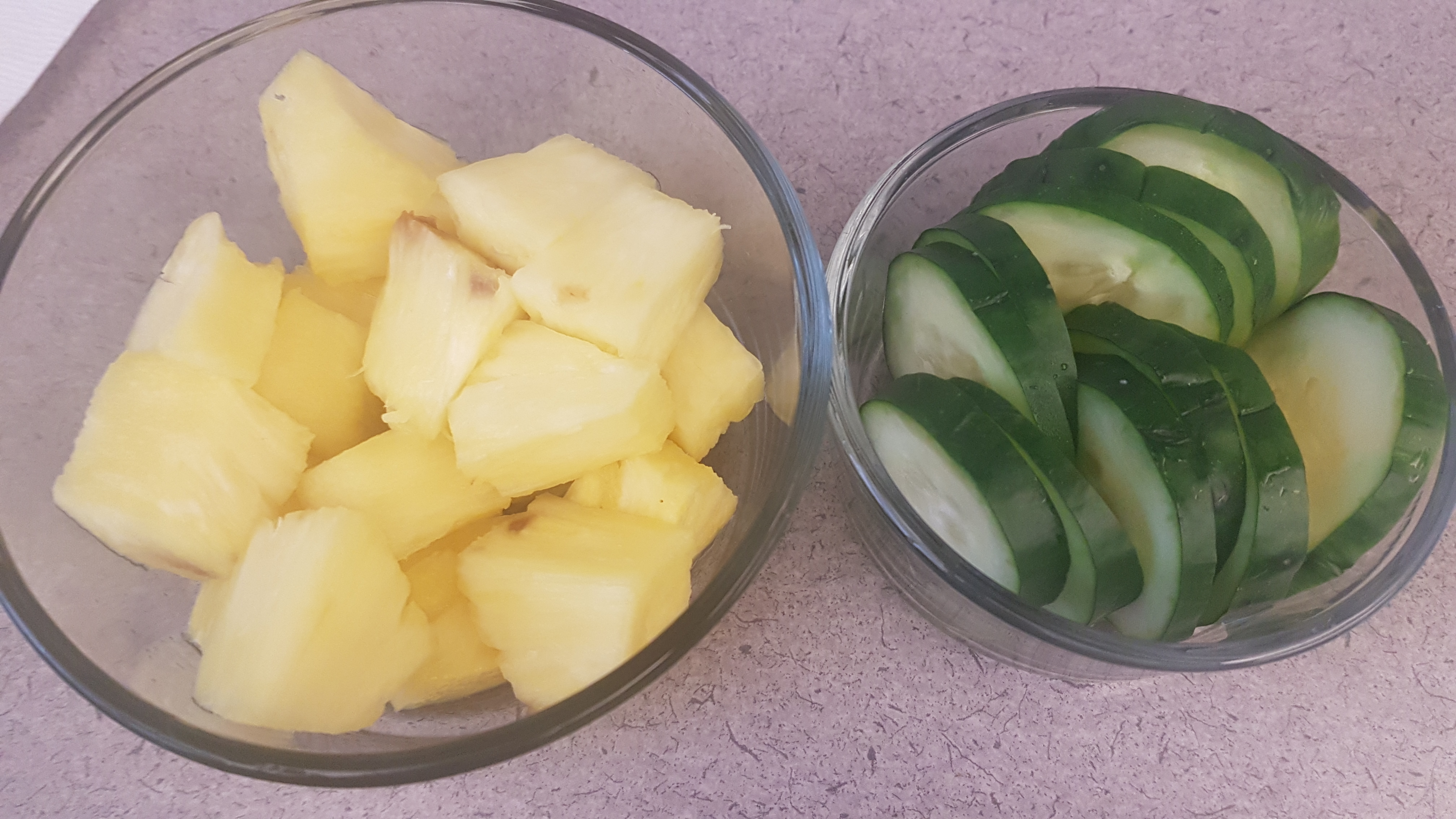 Breakfast –Tofu scramble with greens. I used up the last container of tofu, and the rest of the sauteed greens I’d made. I also added some cayenne and nutritional yeast for a cheesy flavor. But honestly, it was pretty not great. Word to the wise: scrambled tofu tastes 0% like eggs. I won’t be making this again. 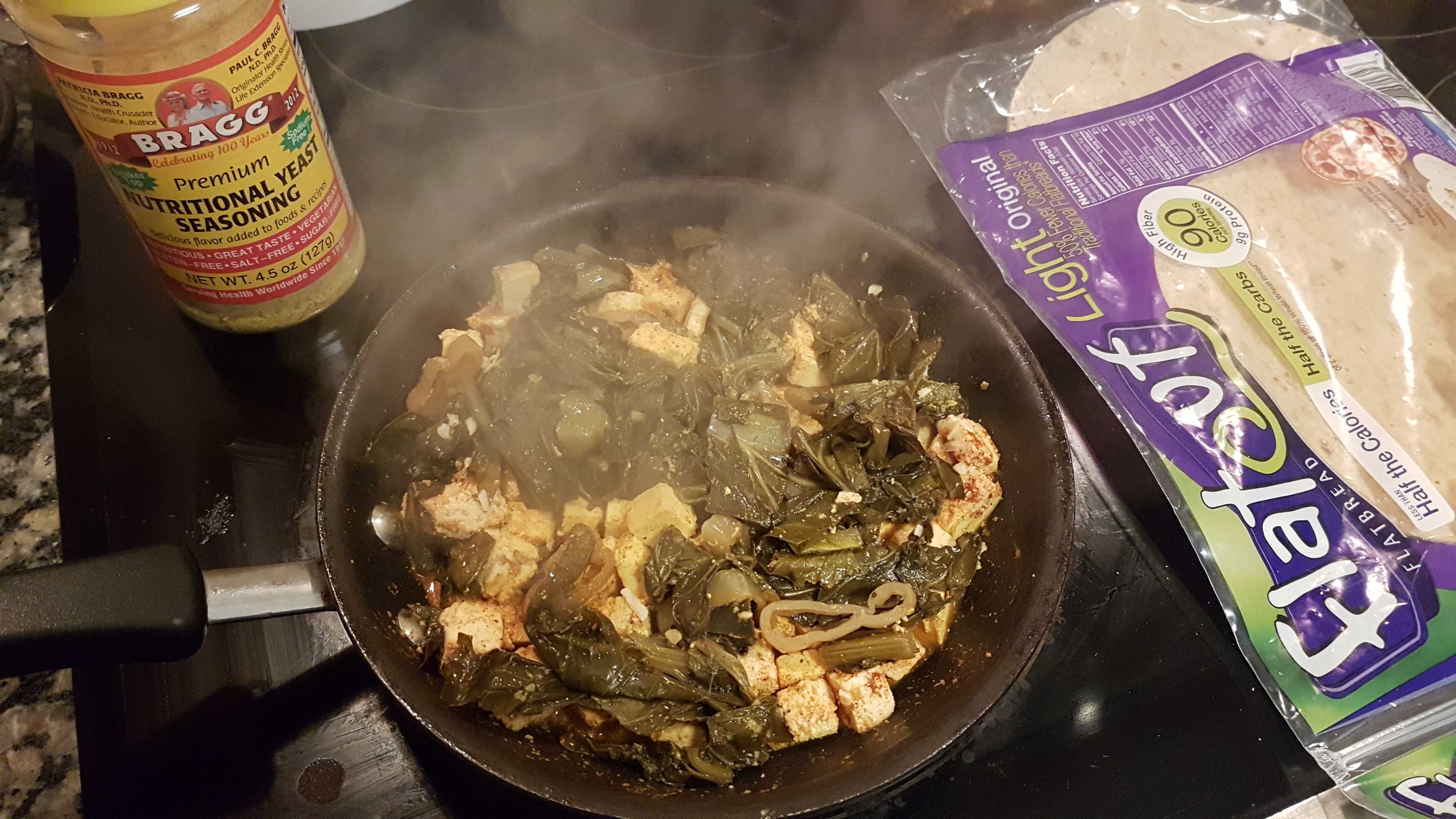 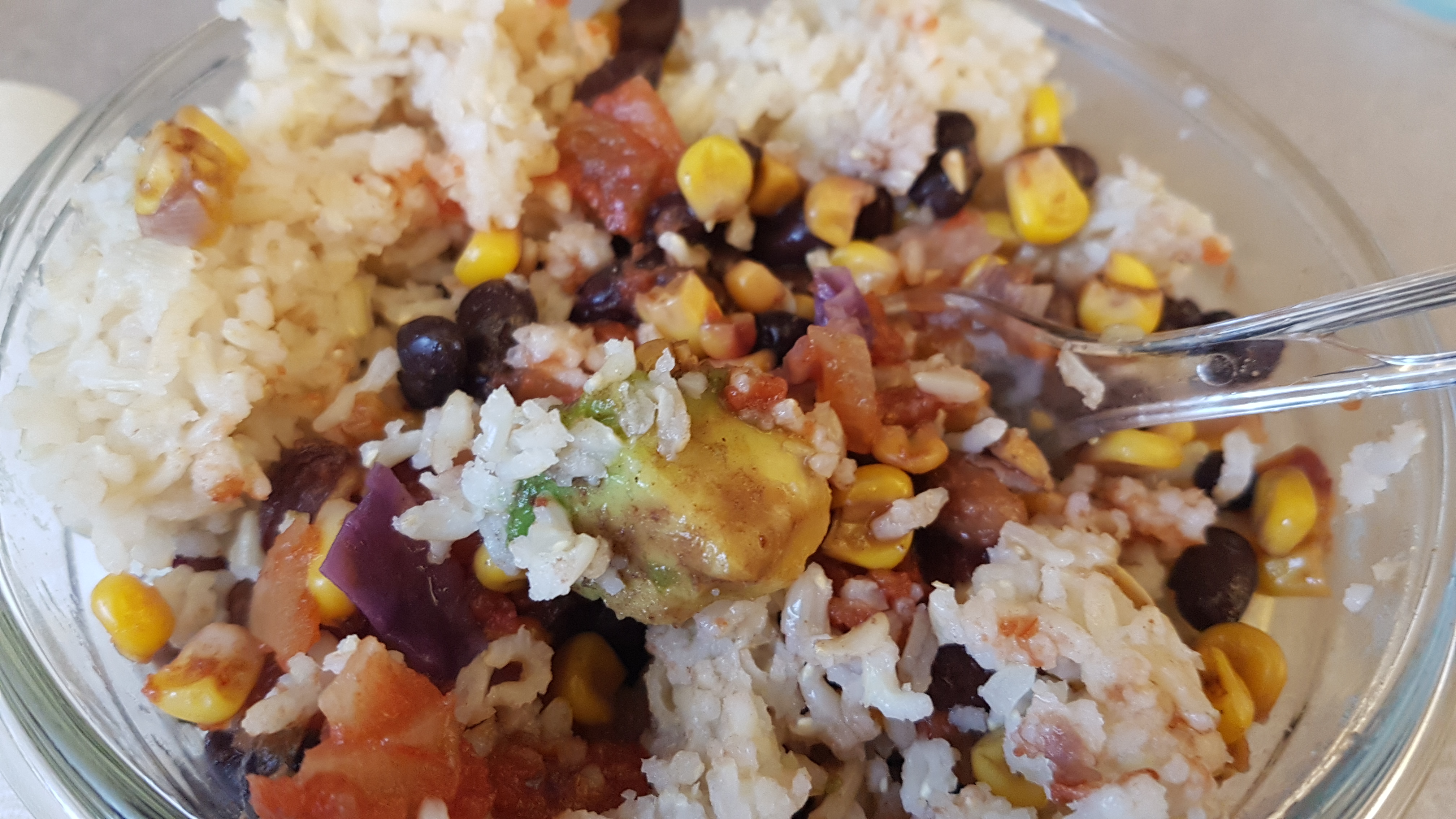 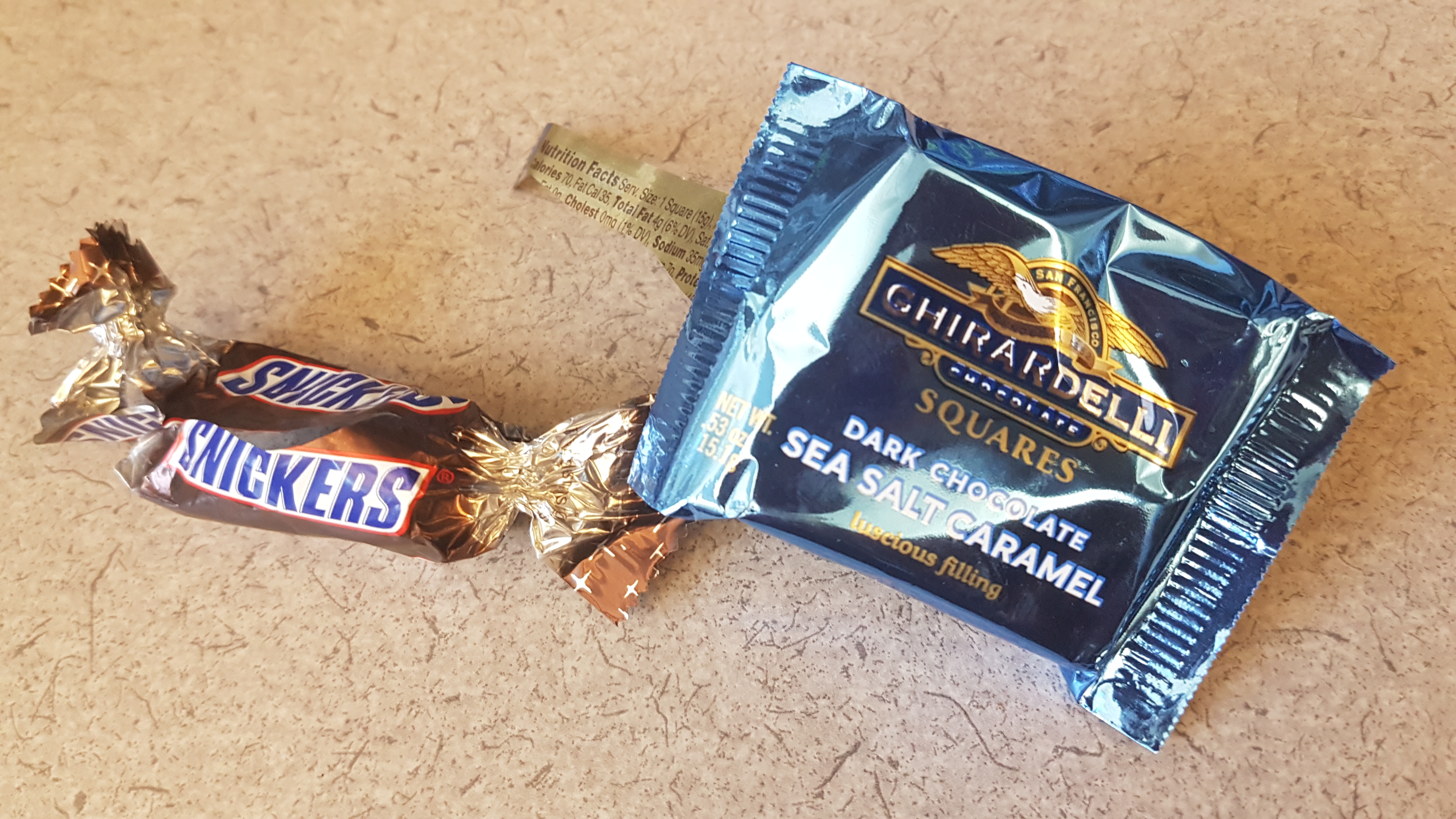 Dinner –Burgers: bison and lentil. I had some bison meat in the freezer that I bought on sale a while ago, and made burgers from that to make the boy happy. 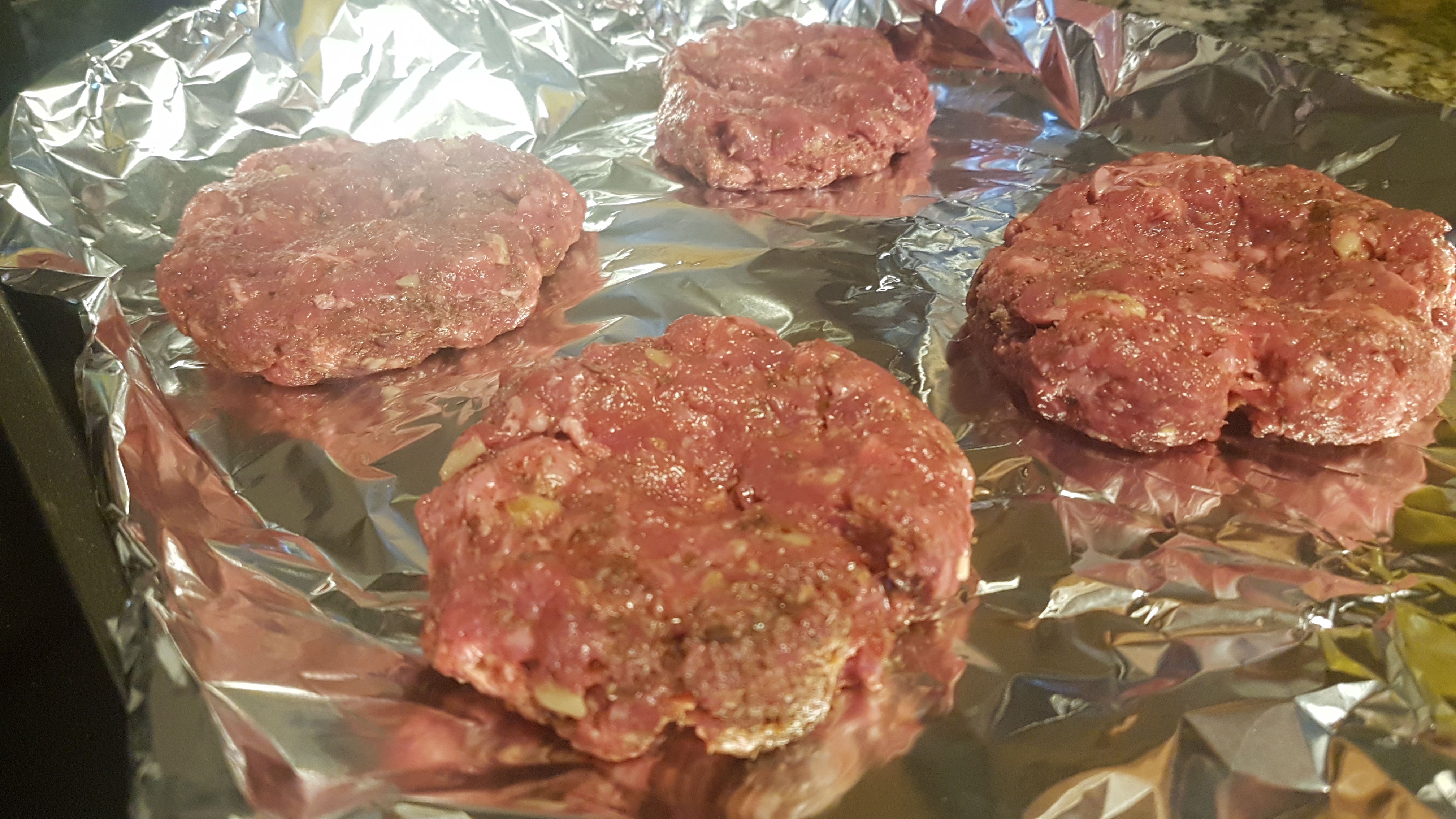 Then I also tried a new recipe for lentil veggie burgers. I’m trying to find the perfect recipe to balance taste and texture and health. I used the ends of a loaf of bread in this instead of bread crumbs, rather than throw them out. 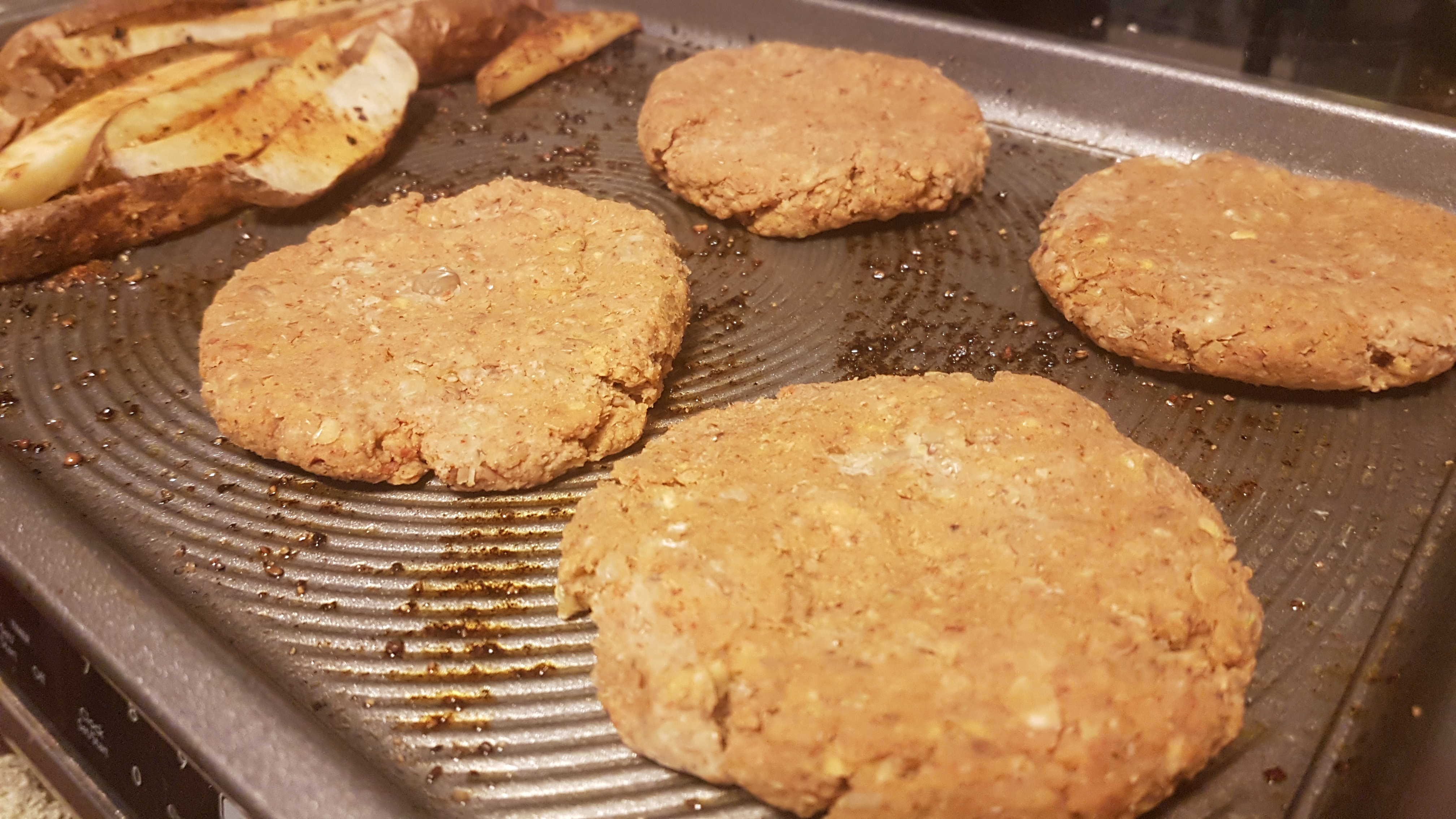 These were good, but a bit too dry. Maybe I need to tone down the amount of bread, or add more liquid to the mix before baking. 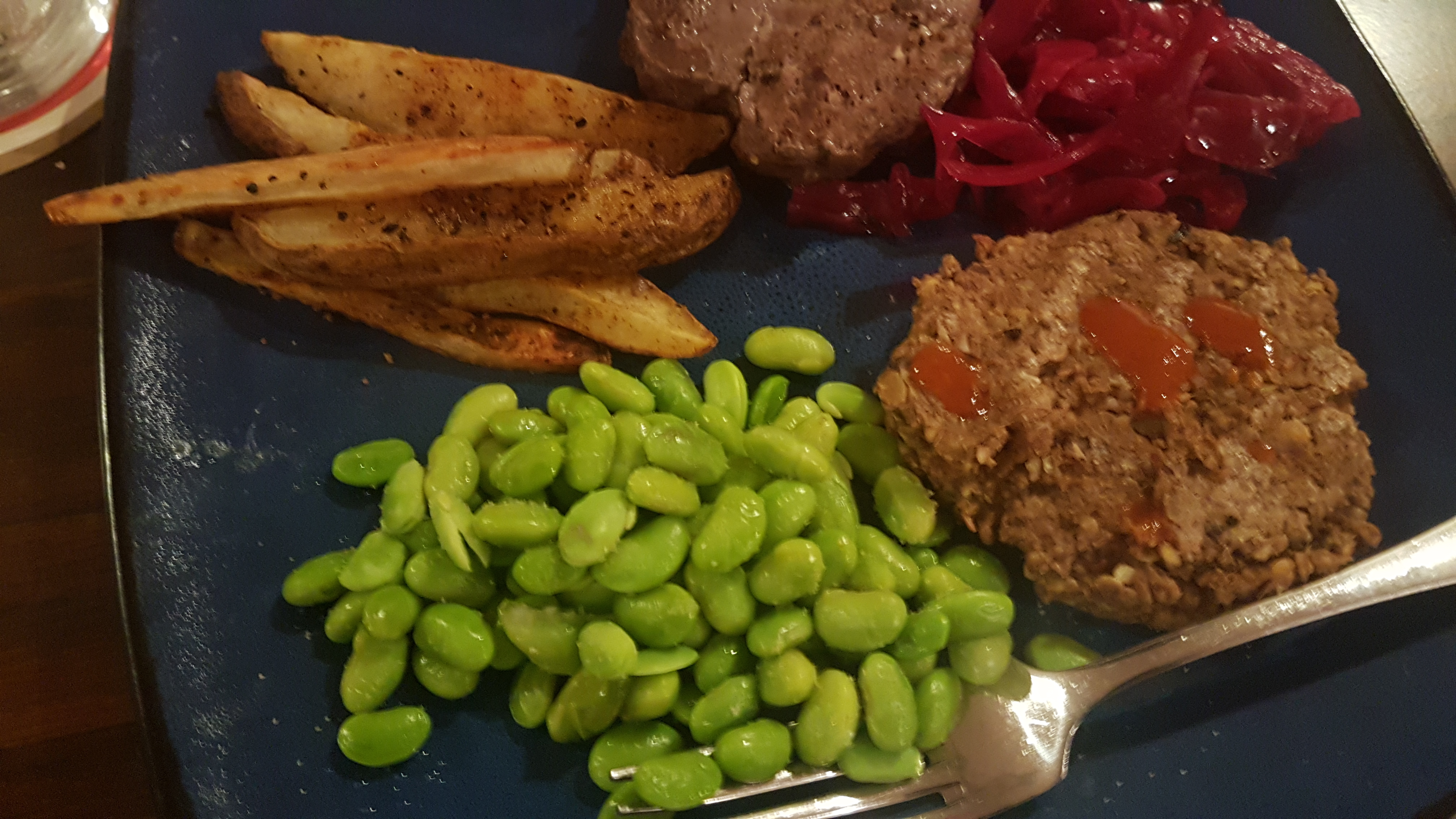 Breakfast – the last of the sweet potato wafffles w blueberry sauce. I’m loving this quick sauce option: I microwave 1/2 cup of frozen blueberries with 1 packet of splenda and some lime juice, then mush the berries with a fork. It’s so simple and sweet and perfect. 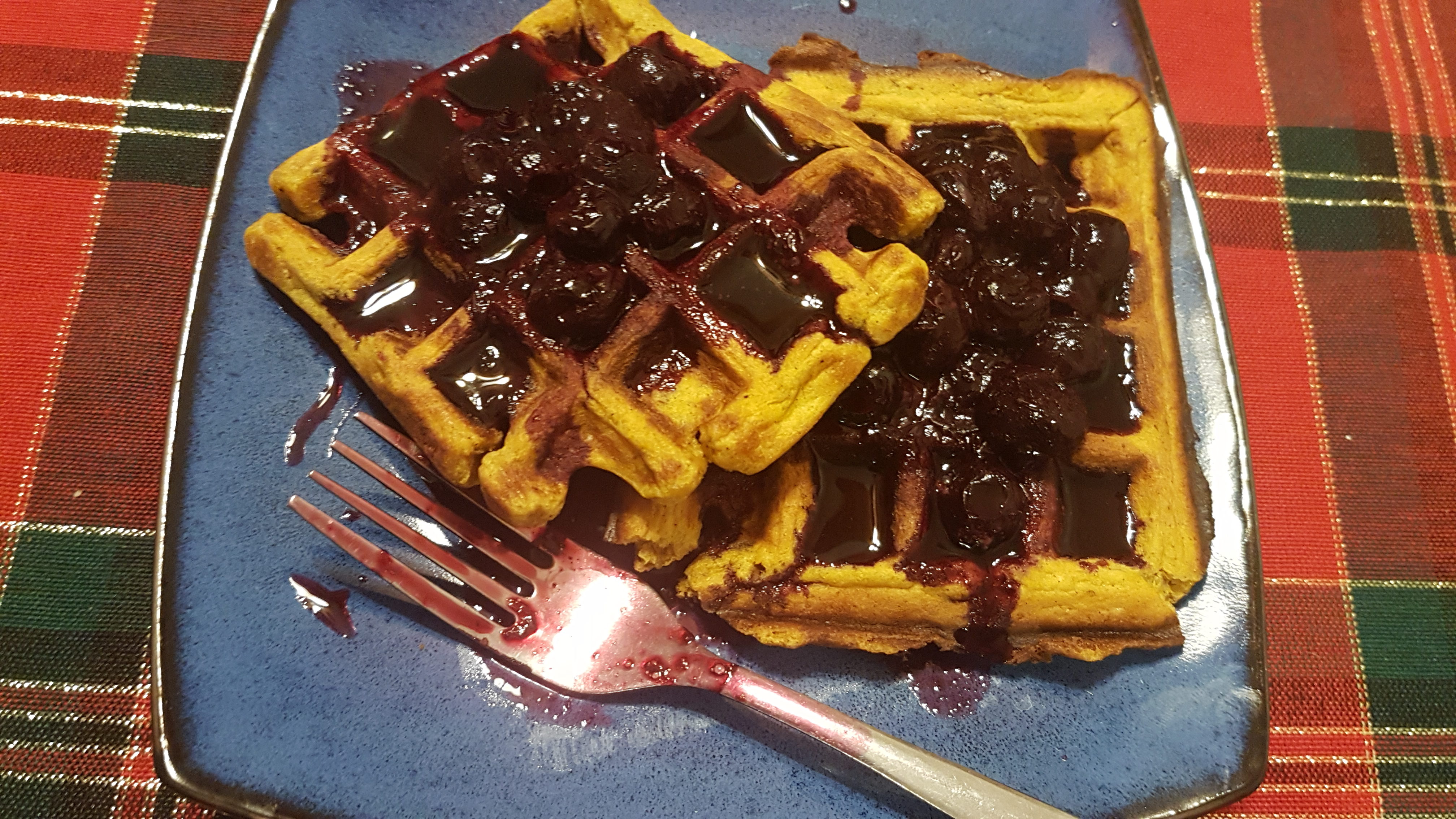 Snack – I had a busy morning, and knew lunch would be later than normal, so I had half a protein bar around 11 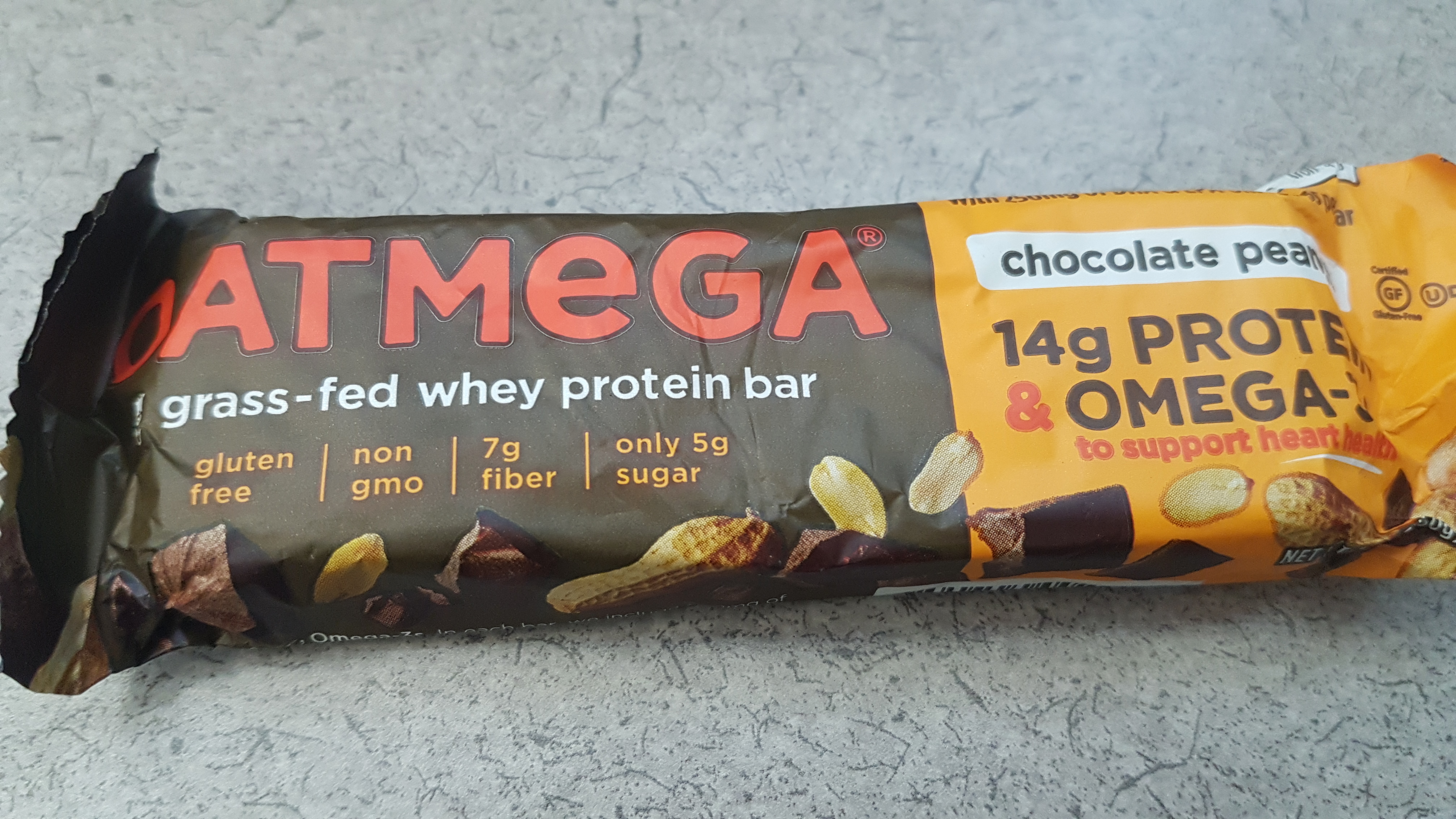 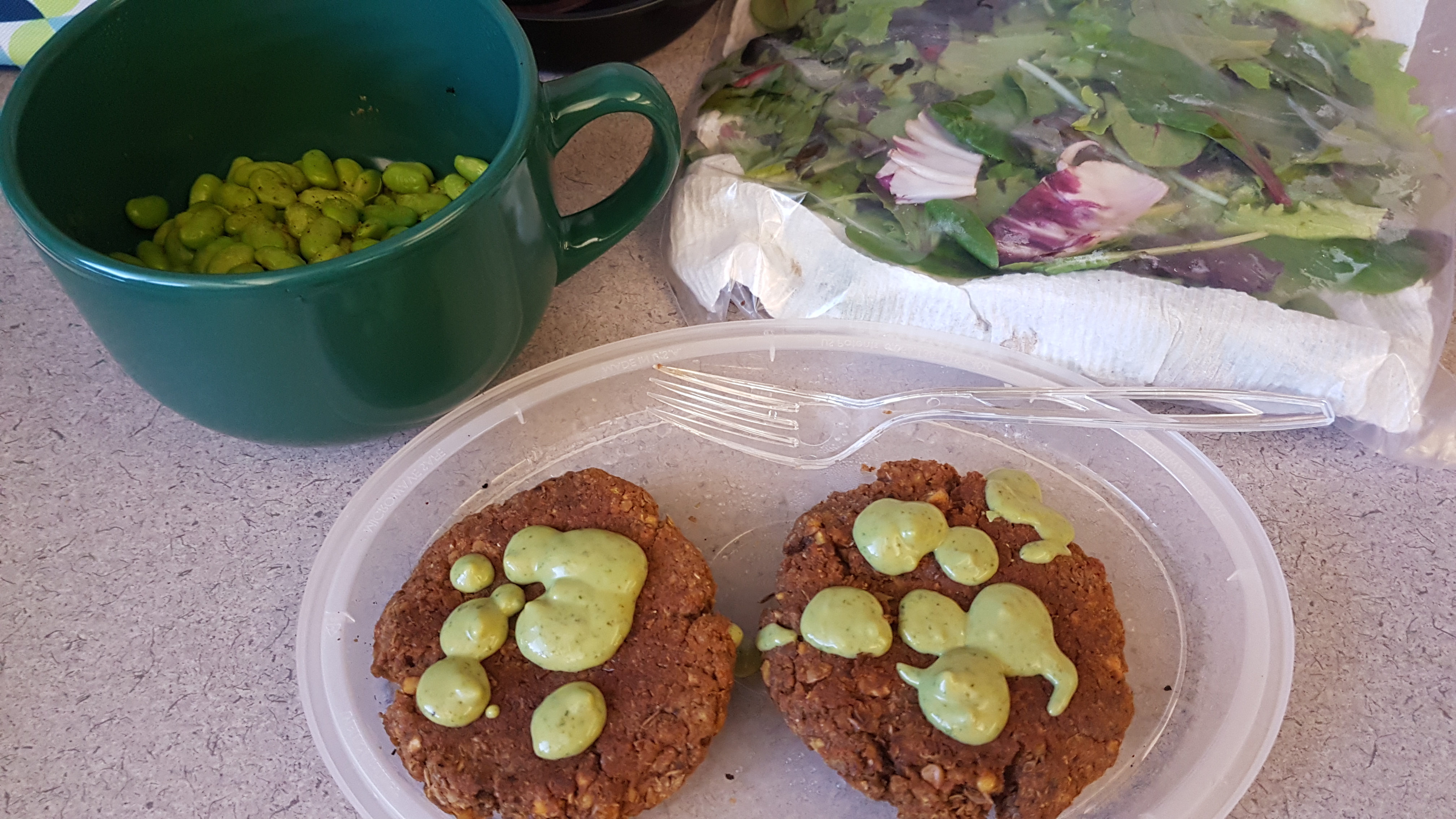 Snack 2 – We had a meeting at which they gave out muffins. I can’t say no to a moist and tasty lemon poppyseed muffin! But now I know I shouldn’t take any drug tests for a few days. 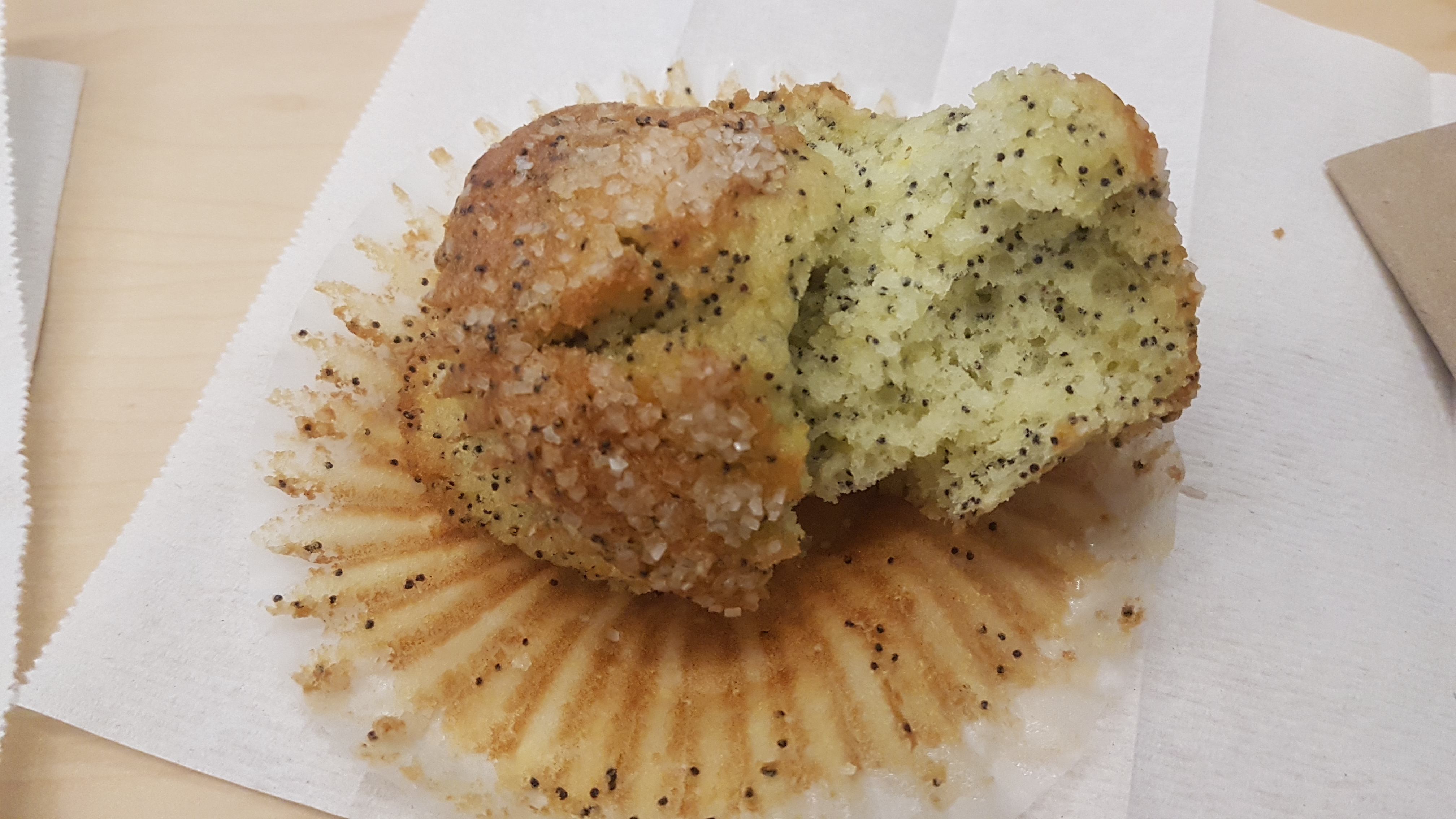 Dinner – My stomach was confused again, so I was hungry but nothing sounded good. Eventually around 6:30 pm I had a bowl of homemade yogurt with the remaining blueberry sauce from waffles and some tropical granola. 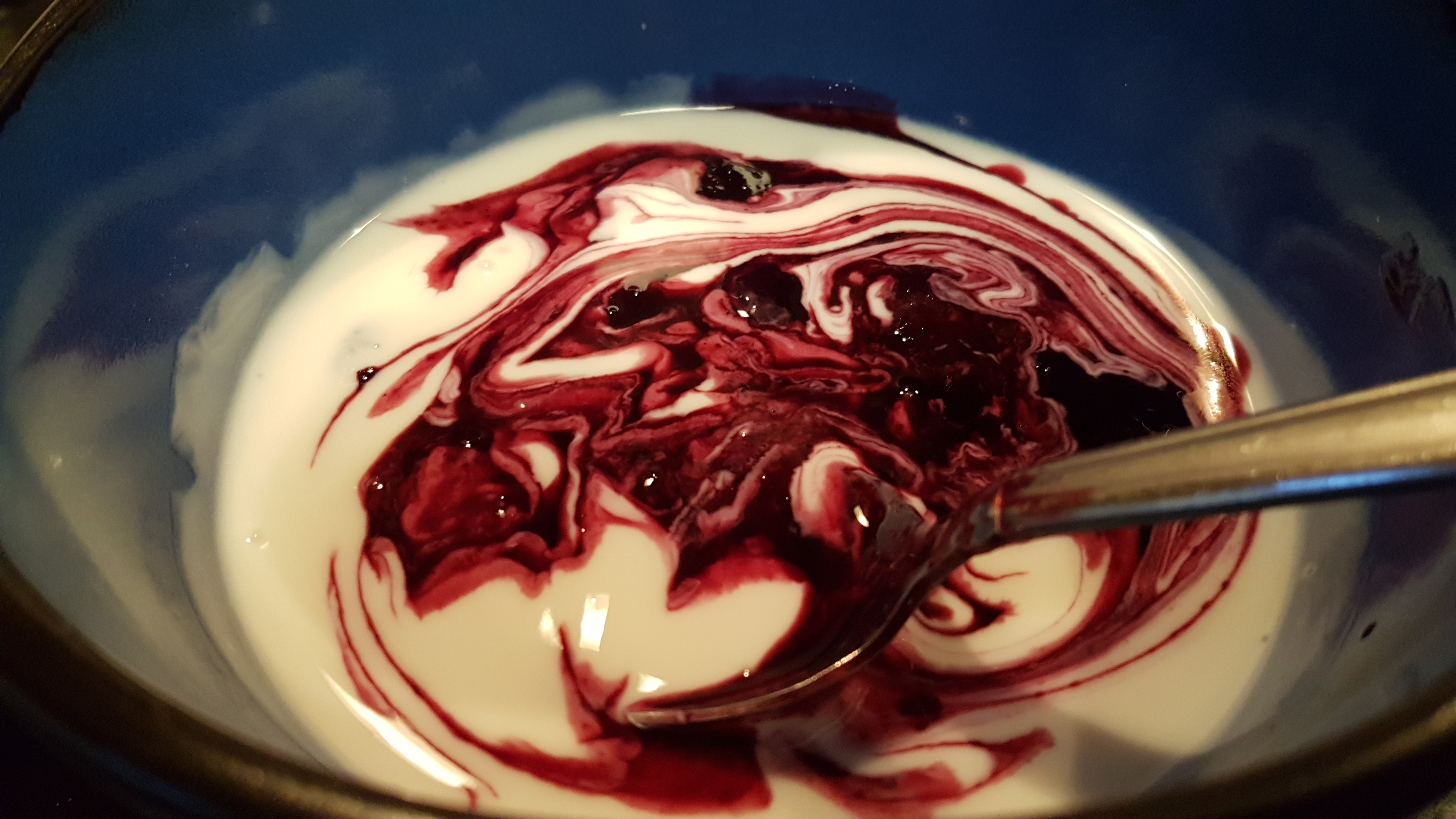 Then I was informed by Twitter that it was National Pizza Day, so naturally I can’t not celebrate a food related holiday. I was going to try this taco pizza recipe I read in a magazine later this week, but now it seemed like a good time to try it out. 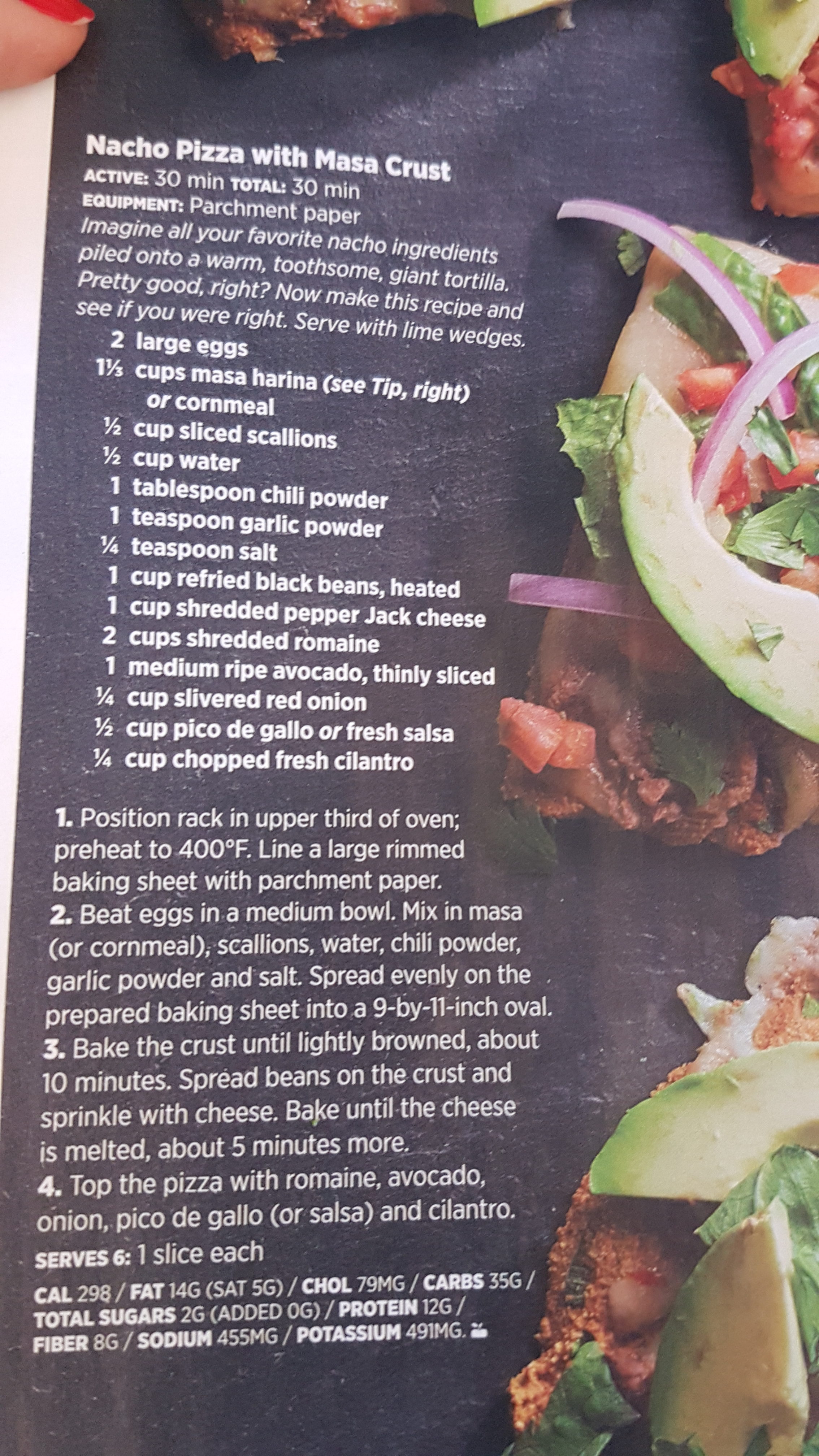 And it turned out pretty good. I liked the corn crust, but I need to cook it longer or roll it thinner next time, it was still soft and chewy in the middle and stuck to the foil a bit. The cauliflower, onion, and pepper toppings I used were tasty, and it used up the last bit of pasta sauce from the vegan meatballs last week. So that was a win. 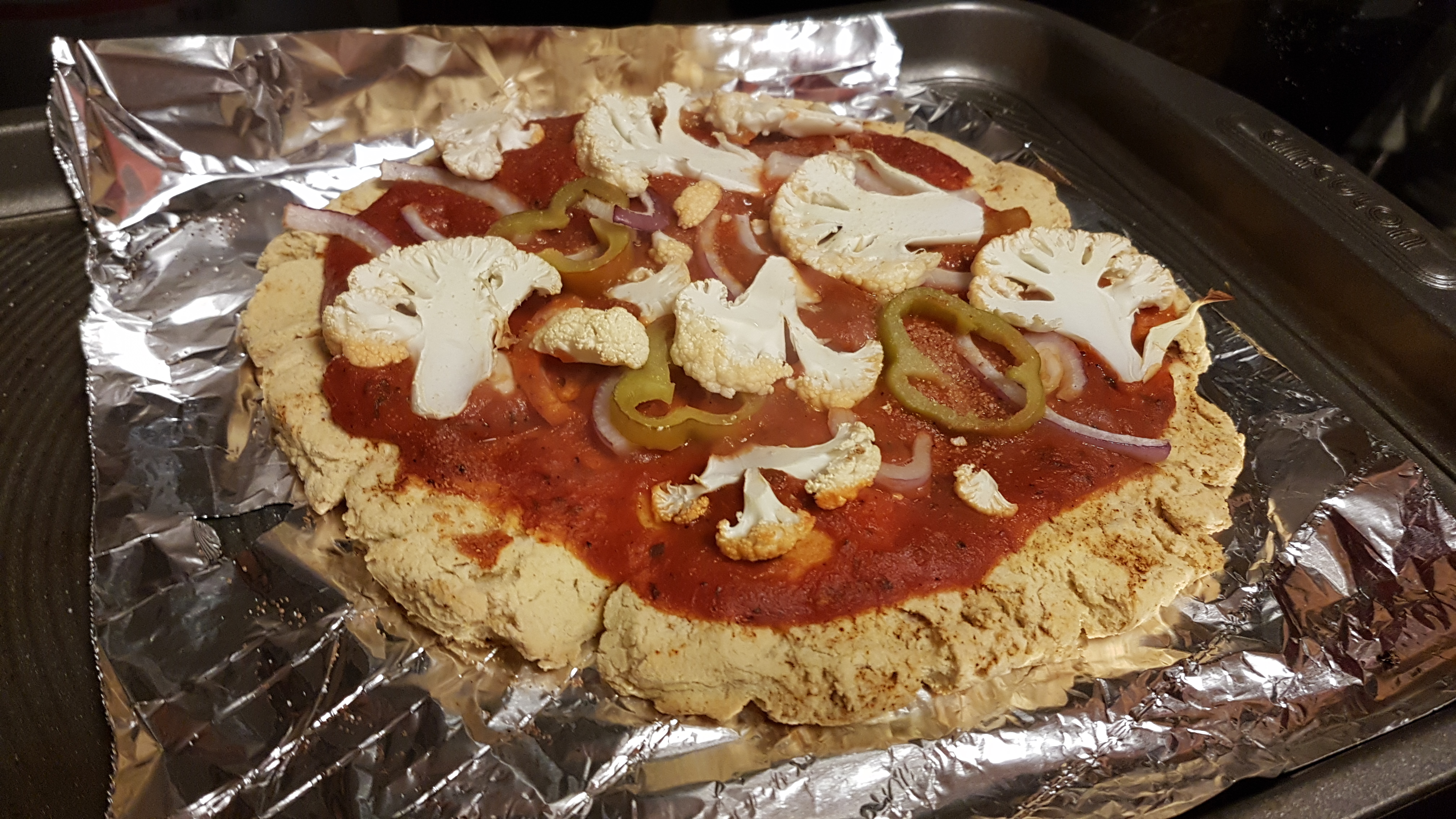 This weekend is predicted to be rainy both days, which is kind of a bummer. It means it’s perfect “start spring cleaning” weather, but also that I bet there’s a 98% chance we will lack motivation to do so. I do need to return a library book, and maybe will browse and pick up some new ones while there. We also need to “adult up” and get our tax paperwork together… #adultingishardthoughyaknow 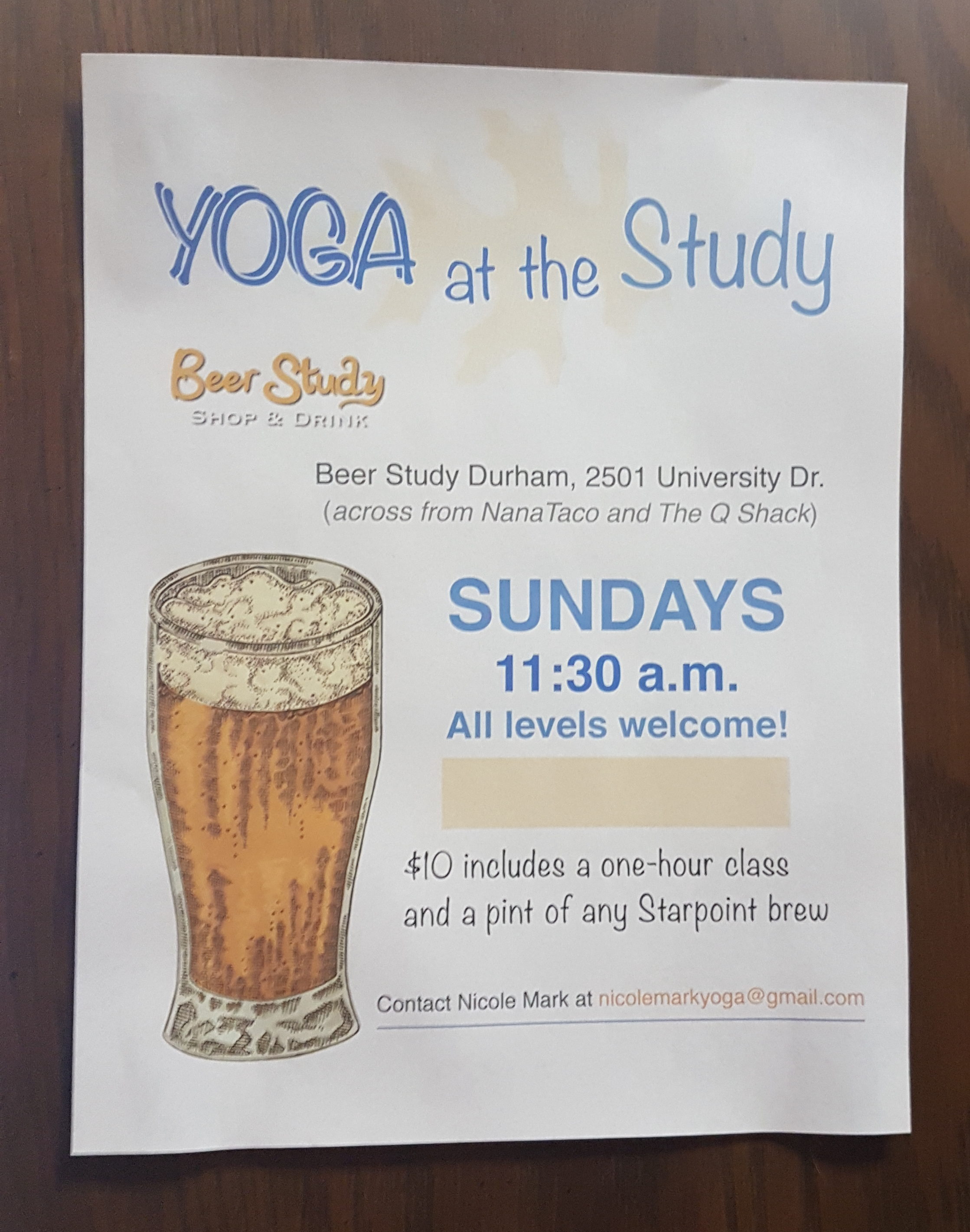 Oh, but I might have a friend who is interested in attending Beer and Yoga on Sunday with me! Two of my favorite things. We shall see.

I was very pleased that we got through this week without spending any more money at the grocery store! And not going out to eat either, besides one beer. Last week I was a bit of a spendy pants…

The only groceries this week were obtained while Erin from ReachingForFI was in town, and we needed some wine for our hangout and chat time 🙂 And then avocados were on sale 2/$1, so naturally we both had to get a least a half dozen! She had a hilarious way of carrying her bounty home too.

This week, I’m trying to learn from my previous mistake of not taking a list, and going grocery shopping while hungry. This week I have a plan, read the ads, scoped out my current stash of coupons, and am making a meal plan after checking the freezer and pantry first. In other words, I’m taking my own advice 😉

Well, I’d say there were a few lessons this week. For one, using up leftover odds and ends isn’t nearly as hard as some people think it is, if you’re willing to be creative and eat potentially strange food combinations. There are also so many different way to re-purpose bits of this and that into different recipes.

For another, you need to plan to change your mind occasionally. I had taken the pesto out of the freezer with the intent of making pasta with pesto, which was actually my second choice when shrimp linguine began to not sound great. Then I didn’t feel like pesto pasta, so I decided it would be better used by adding it to the tomato soup. I think we changed up the meal plan every single night this week.

And finally, cooking is an experiment! Don’t be afraid to try new and different recipes. The absolute worst that can happen is it is inedible and you throw it out. People waste about 40% of their food, but if you can find new recipes your family will love, it may cut down on waste over time. Several things I tried this week didn’t work out, but that’s okay. We will keep trying and keep learning!