This week was action-packed at the start, and then slowed down as the week wore on. Ready for some rest this weekend! Speaking of weekends, the last one was quite productive. I finally got the kitchen wall constructed just the way I wanted it! I think it looks great, and I’m loving having a whiteboard to meal plan and keep track of what’s going on each week now. 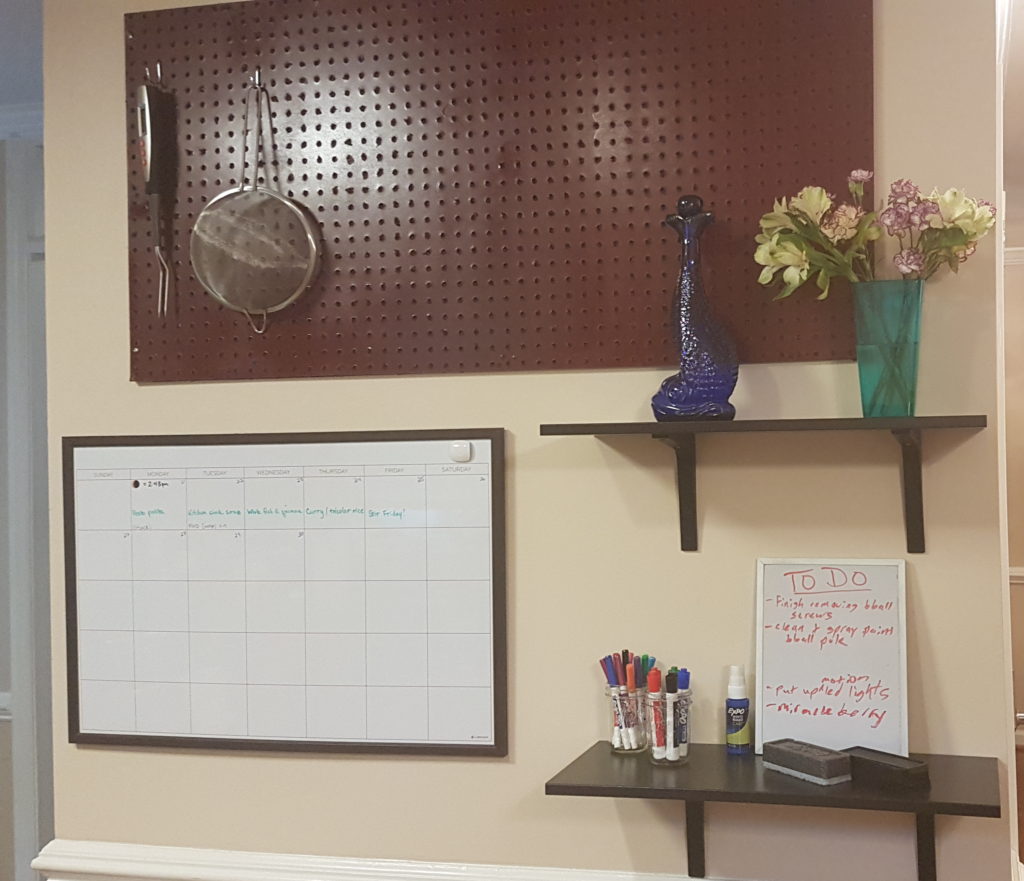 Breakfast – strawberry cherry smoothie: I’m learning that I’m really bad at remembering to take photos of smoothies. Maybe it’s just too early, or I drink them too fast before I remember…

Lunch – AWESOME SOLAR ECLIPSE POTLUCK! We had a huge salad bar (because the sun makes things grow) and a Sun-dae bar! 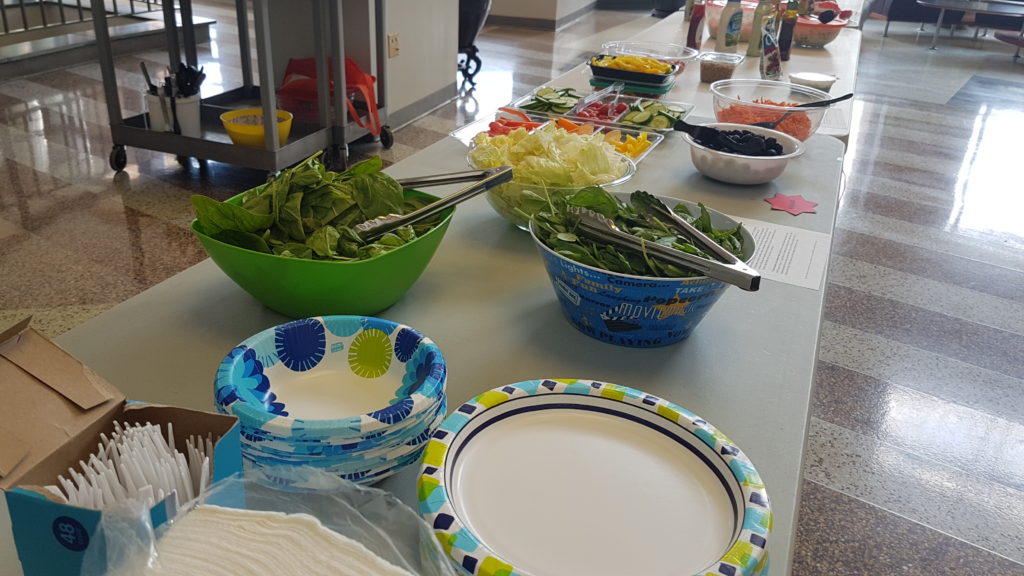 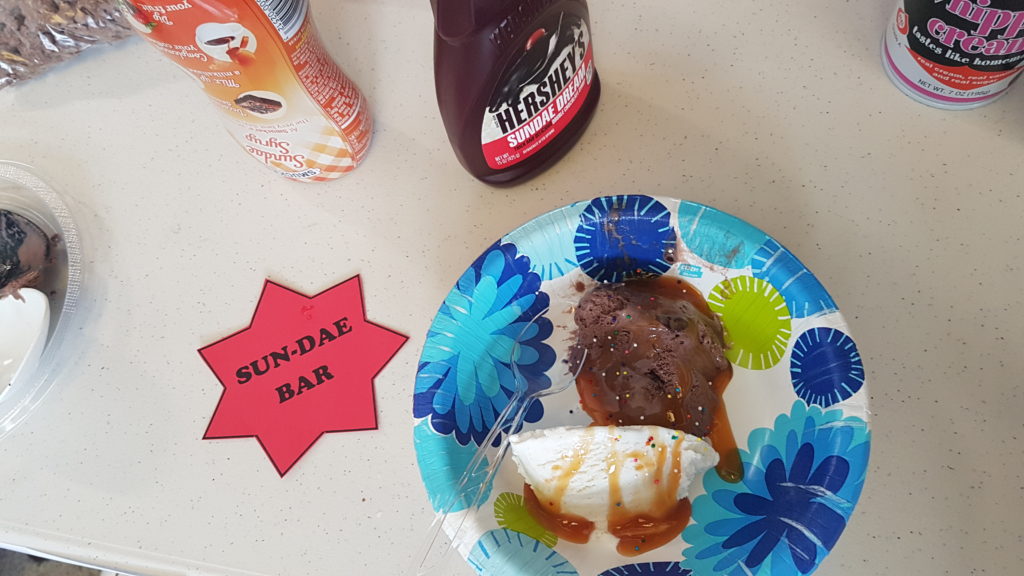 Dinner – pesto pasta, and playing with hubby’s new toy. He finally, after almost a year of waiting, got a Switch, and was really excited about it. We got to play with a close friend that moved to Iowa and we haven’t seen since our wedding! That was really nice. I may yet come around to liking console games.

Breakfast – granola bar; this recipe is AMAZING, and makes like a zillion (or 18…) so a batch lasts quite a while in the fridge. You’ll see these a lot. No regrets.

Lunch – well, I got pretty sick in the a.m., it was a weird nausea/upset stomach feeling, so I ended up going home and sleeping through lunch  🙁

Dinner – my stomach finally started to feel ok around 4:30, so by 5:30 I managed to eat a can of Progresso chicken & dumplings and a small roast beef sandwich to dunk in it. 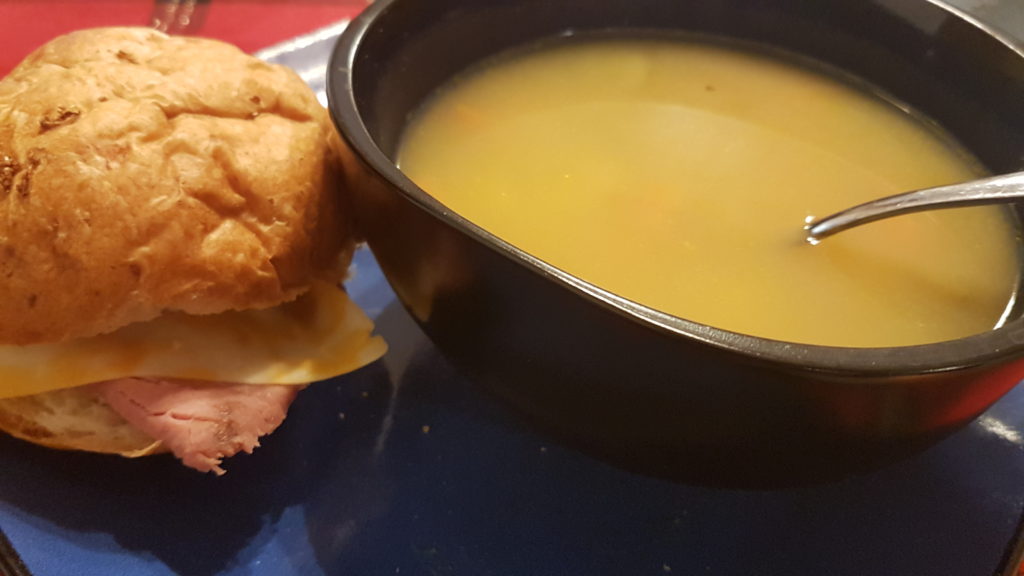 I’m so thankful it was a short stomach bug, because I really had doubts I’d be able to make it to the Bull City Food Swap. But, make it I did! It was a smaller gathering, but since it was at Fullsteam Brewery, one of the bartenders was there and he had some GOOD stuff! Thus, less competition.

So it worked out great, I got a pound of his homemade breakfast sausage, and a few ounces of chicken of the woods mushrooms from his property. I’ve never had it, so I’m pretty excited! Also picked up some homemade ricotta and sausage ravioli, a “spiced beer sauce”, and some family recipe brownies. A good night, in my opinion. 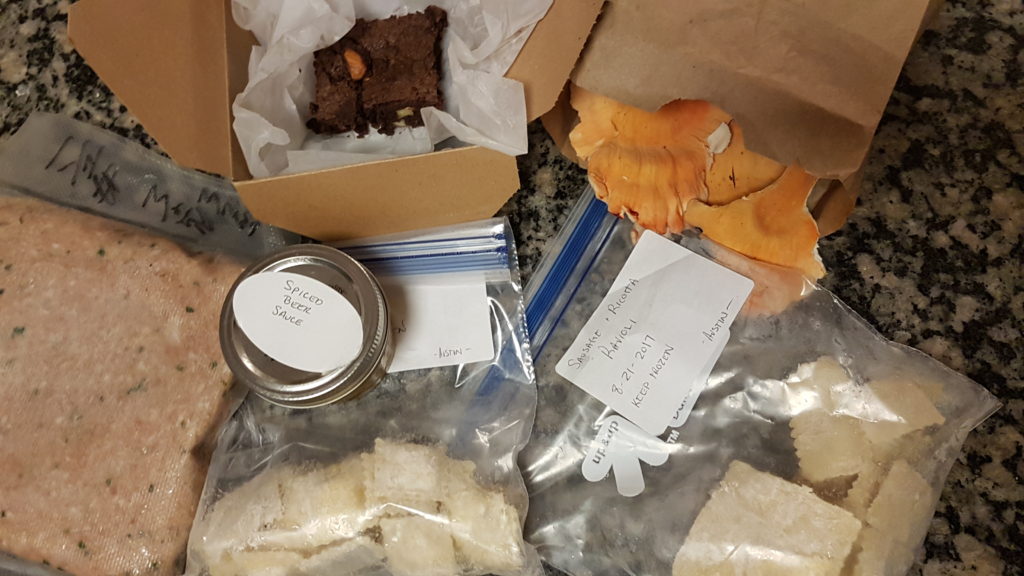 Breakfast – yogurt with homemade granola, grapes. I made a big batch of tropical granola for the food swap, and since there were so few people I only traded about half. Which is fine with me, because I didn’t know homemade granola was so easy, and delicious! 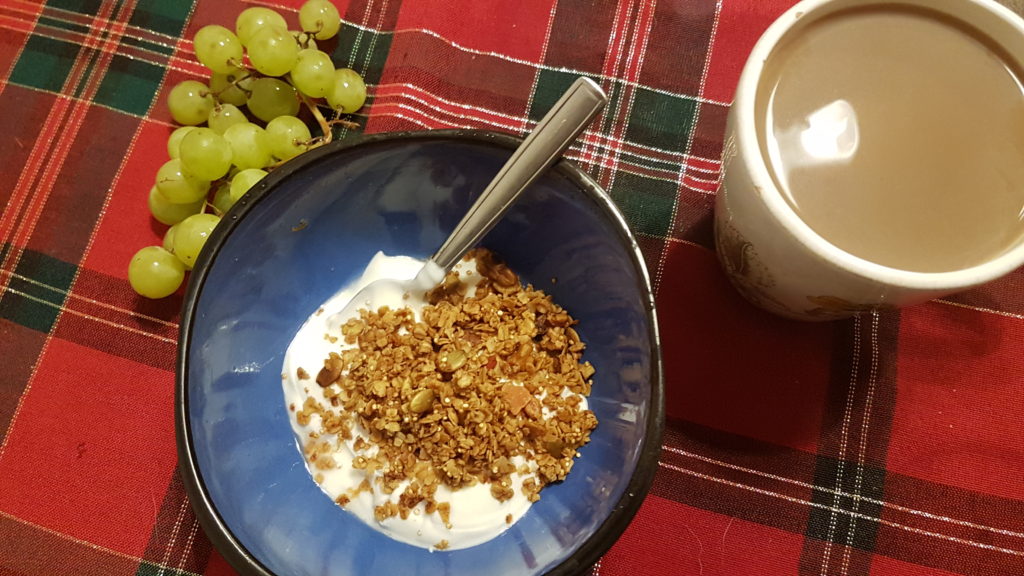 Lunch – leftover stuffed cabbage casserole. Another thing that makes a CRAP-TON and becomes leftovers for days. I’m fine with it because I think it’s delicious, and it costs like $0.20 per serving.

Dinner – salmon & quinoa salad. This is a recipe from my sister in law that I have taken as my own, because I absolutely ADORE how delicious all the parts are as a whole. I could eat this like all the time. It is so fresh and light but yet so filling. 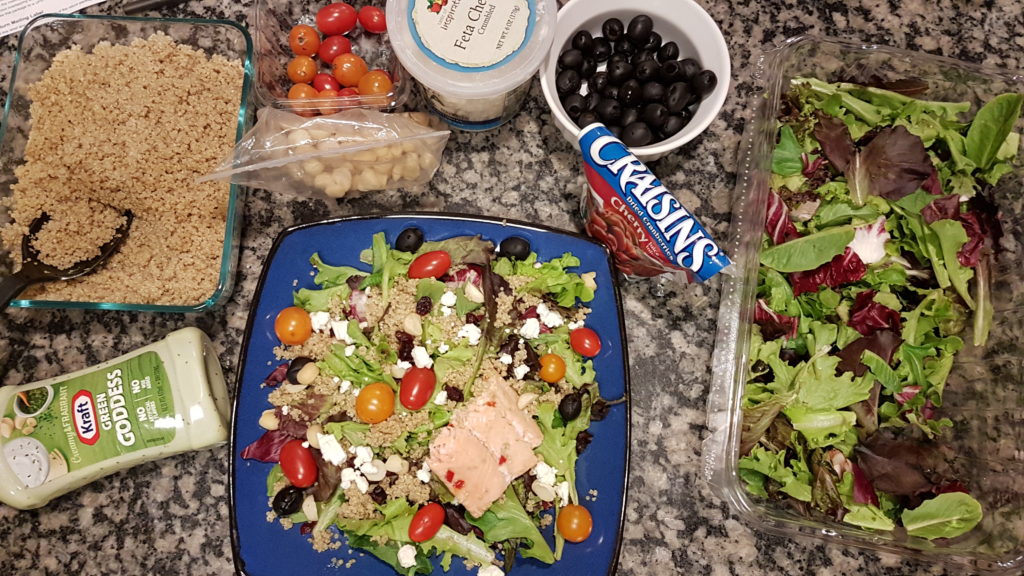 Snack – salad & tea. Since the potluck was a salad bar, we had oodles of leftover salad mixes. So I figured why not get some extra greens in 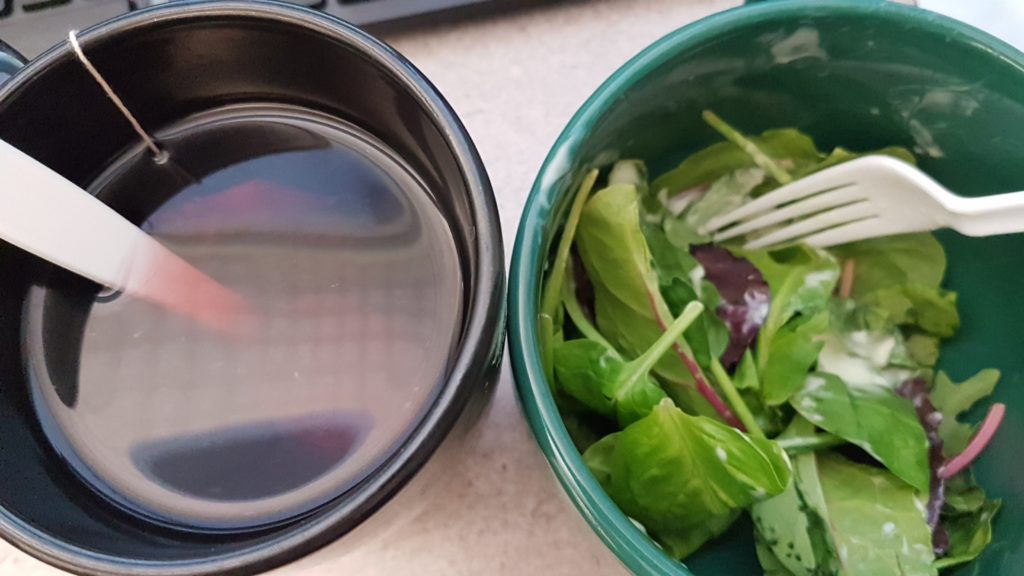 Lunch – salmon salad again, and still had some salmon left! 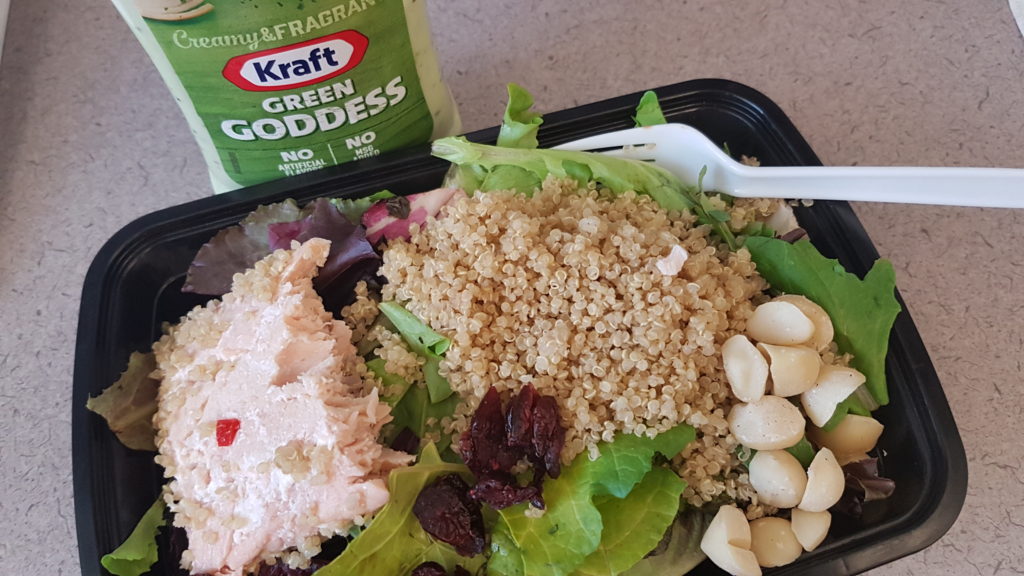 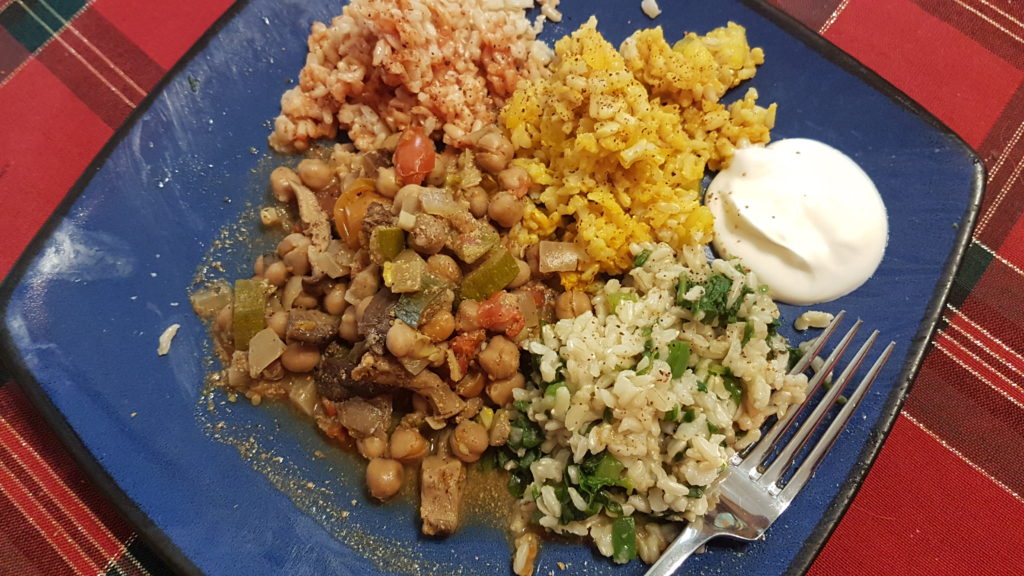 Snack – HOT FUDGE BROWNIE SUNDAE. 5 minutes of pure, sugary bliss. I got the brownies from the food swap (and they were a family recipe that was GD amazing), added some chocolate cherry ice cream, caramel sauce and hot fudge. Lord have mercy… 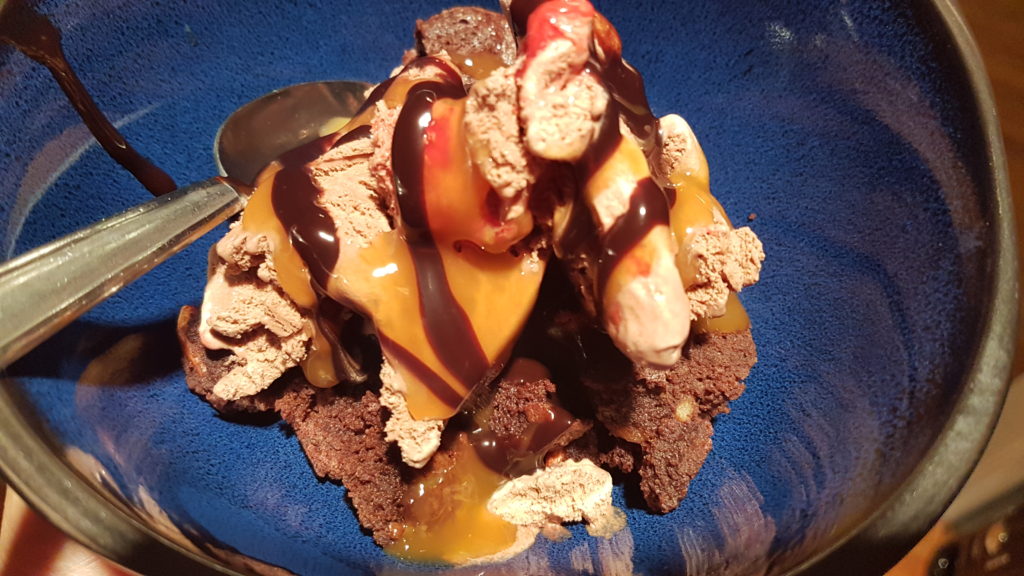 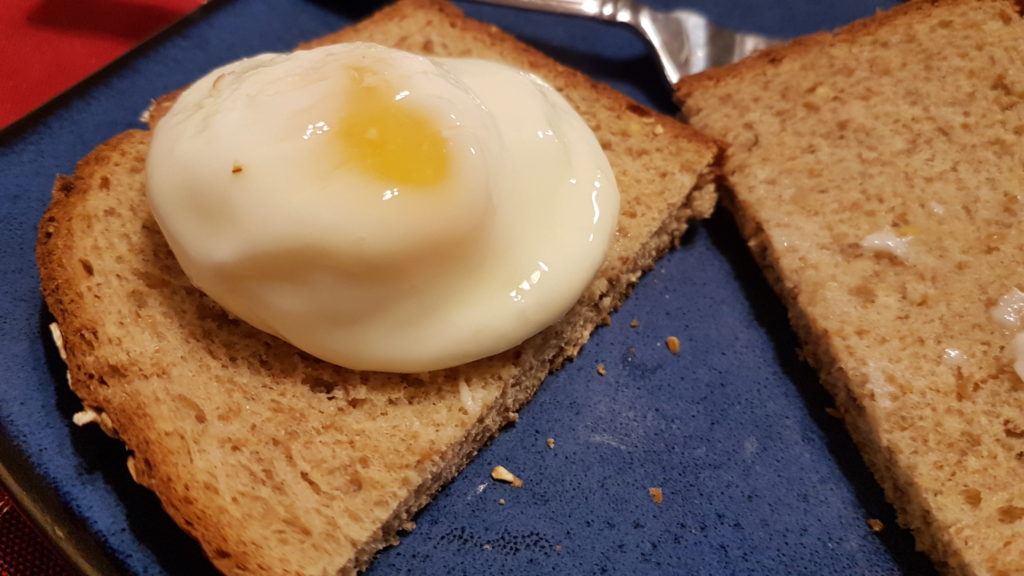 Lunch – salmon salad; you may notice I had a lot of this! I made 2 huge filets for dinner, and it ended up being enough to break into 3 smaller meals for me. I only eat about 2-3 oz at a time. 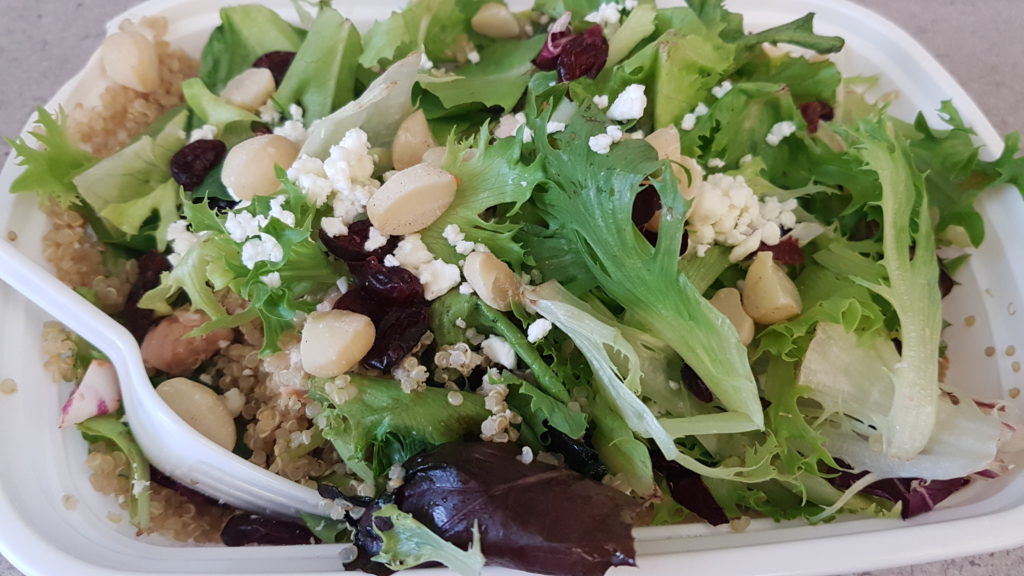 Dinner – world’s most delicious steaks, onions/mushrooms/peppers and leftover rice. I seared the steaks in butter, and slow cooked sliced up peppers, onion, and oyster & chicken of the woods mushrooms in white wine and soy sauce and garlic. 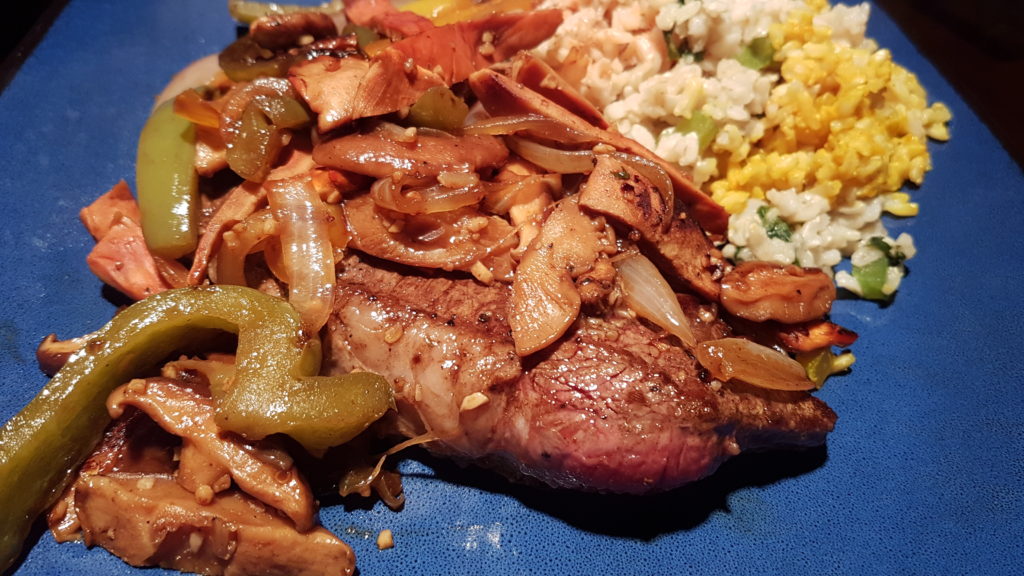 Plans include Saturday morning yoga and the Durham Farmers Market, perhaps followed by some hiking and or kayaking (if I can convince the hubby to brave the humidity!). Sunday will hopefully be a day of just resting. Reading, video games, movies…

My goal is to keep this number under $100 all the time, and eventually get down to $75/week for food.

Whooo, pretty much nailed it! This included a big pork roast because I’d kept some leftover giant rolls from the potluck and wanted to make BBQ pulled pork, a big beef roast that was on sale (which I turned into 2 outstanding steaks plus another pound of stew meat for the freezer), but the bulk of it was like 10 pounds of frozen fruit, for more smoothies. 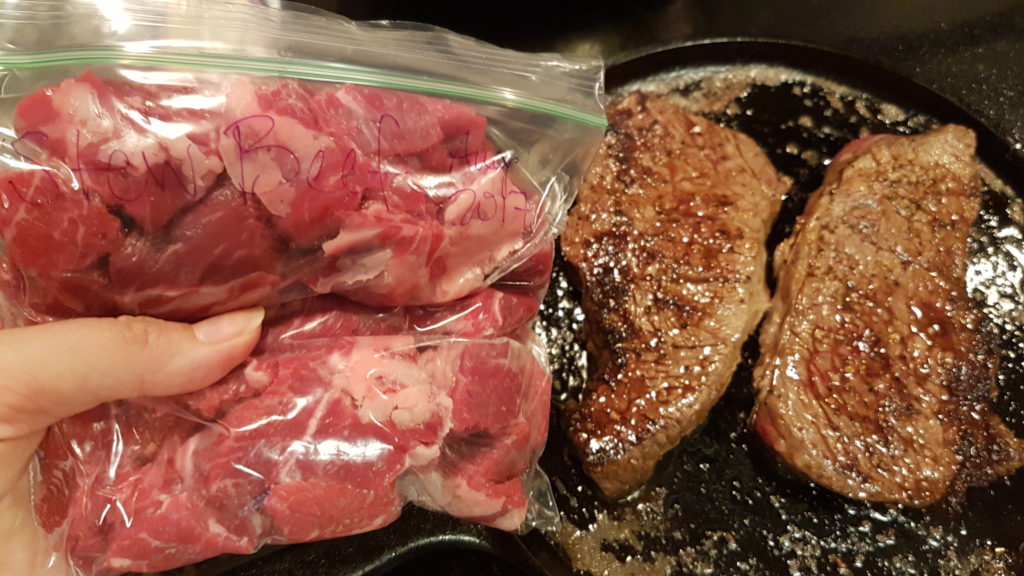 We have almost zero fruit left in the freezer, and Kroger was running a good sale, so now we’re restocked on strawberries, blueberries, mango, and peaches! Yay. Maybe I will actually remember to take some pictures of upcoming smoothies… not that they make terribly exciting photos anyways  🙂  If you have any favorite recipes to share in the comments, I’m all ears!

Once again I learned the importance of being flexible with your meal planning! I think a big reason why people are intimidated by meal planning and cooking is because we are not taught how to improvise to avoid food waste. It is a skill that takes time and experimentation, and a willingness to be wrong sometimes. 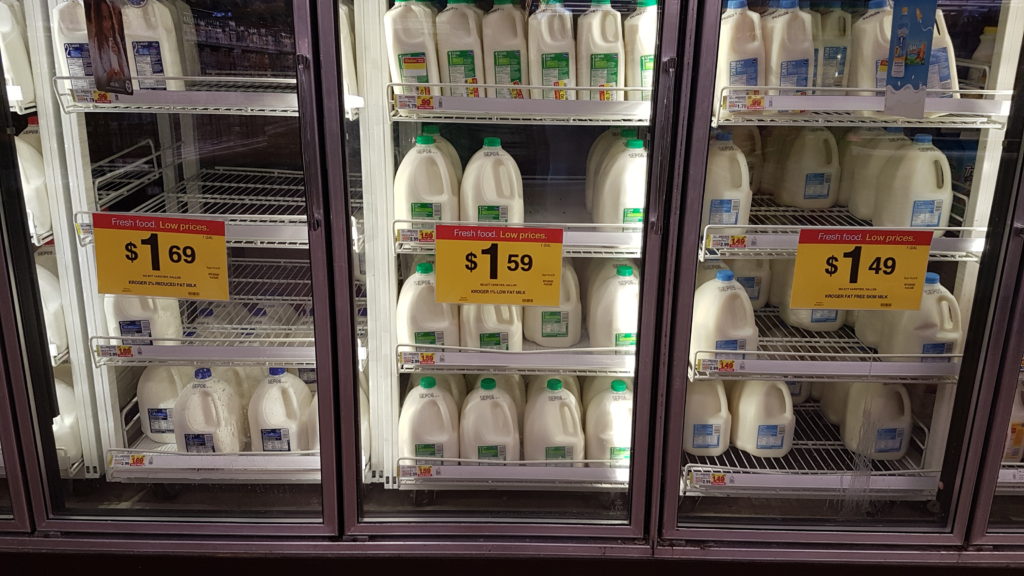 I also found this interesting experiment at the grocery store. If you can’t tell, the 2% milk was 1.69, the 1% milk was ten cents cheaper, and the skim milk was cheapest at $1.49. And yet, the 2% milk was still the one that had been almost bought out.

I think it’s interesting that the store is trying to influence shopper decisions to make “healthier” choices (skim milk vs whole milk as a health thing is a whole big discussion for another time and place) by using economics. Assuming the stores actually DO want consumers to be healthier (a shaky assumption) this could be a good way to gently nudge people in the right direction.