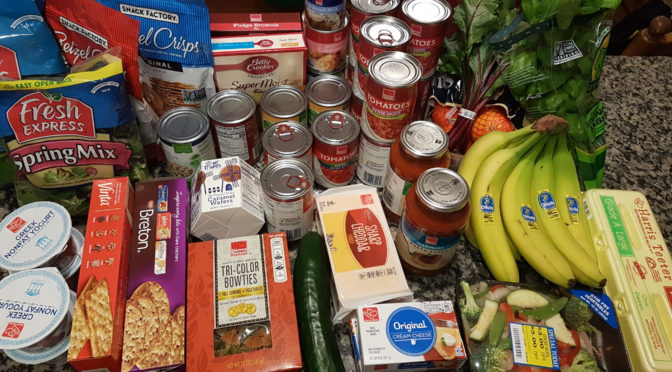 Well, we picked a great weekend for a dinner party! Harris Teeter was having a 10% off all wine sale, and I also got a coupon for $20 off an order of $100 or more. Without the booze for the party, I would not have hit that $100. Yes, I know, it is justifying spending I didn’t necessarily have to make. But between the sale and the coupon, the alcohol was basically half price! 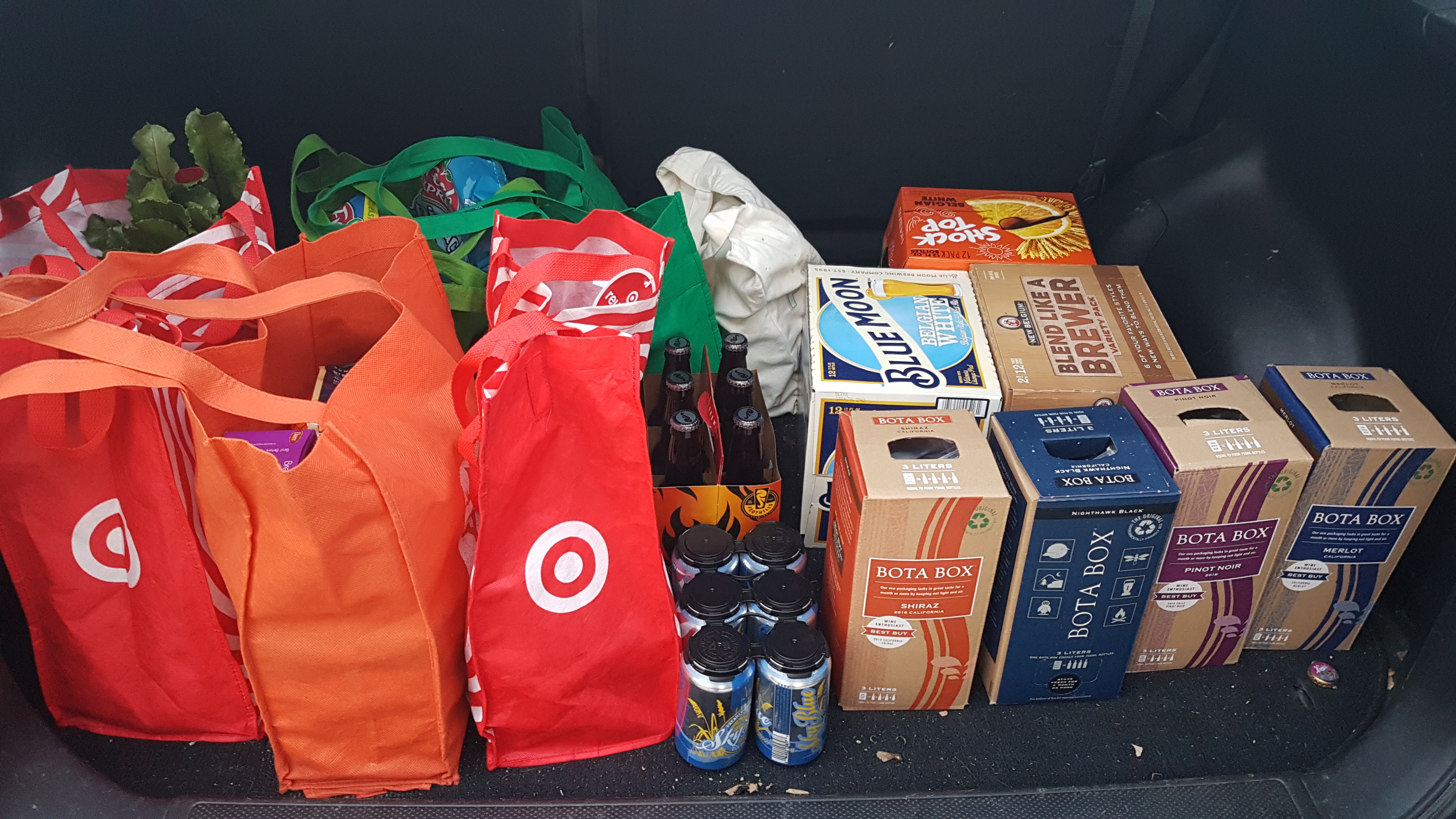 The party was on March 3rd, so I had a “3” theme. I made three dips: buffalo chicken, beet hummus, and vegan spinach artichoke dip, along with a nice antipasto platter. I had homemade pickles, bacon jam, olives, nuts, figs, dates, and prunes. 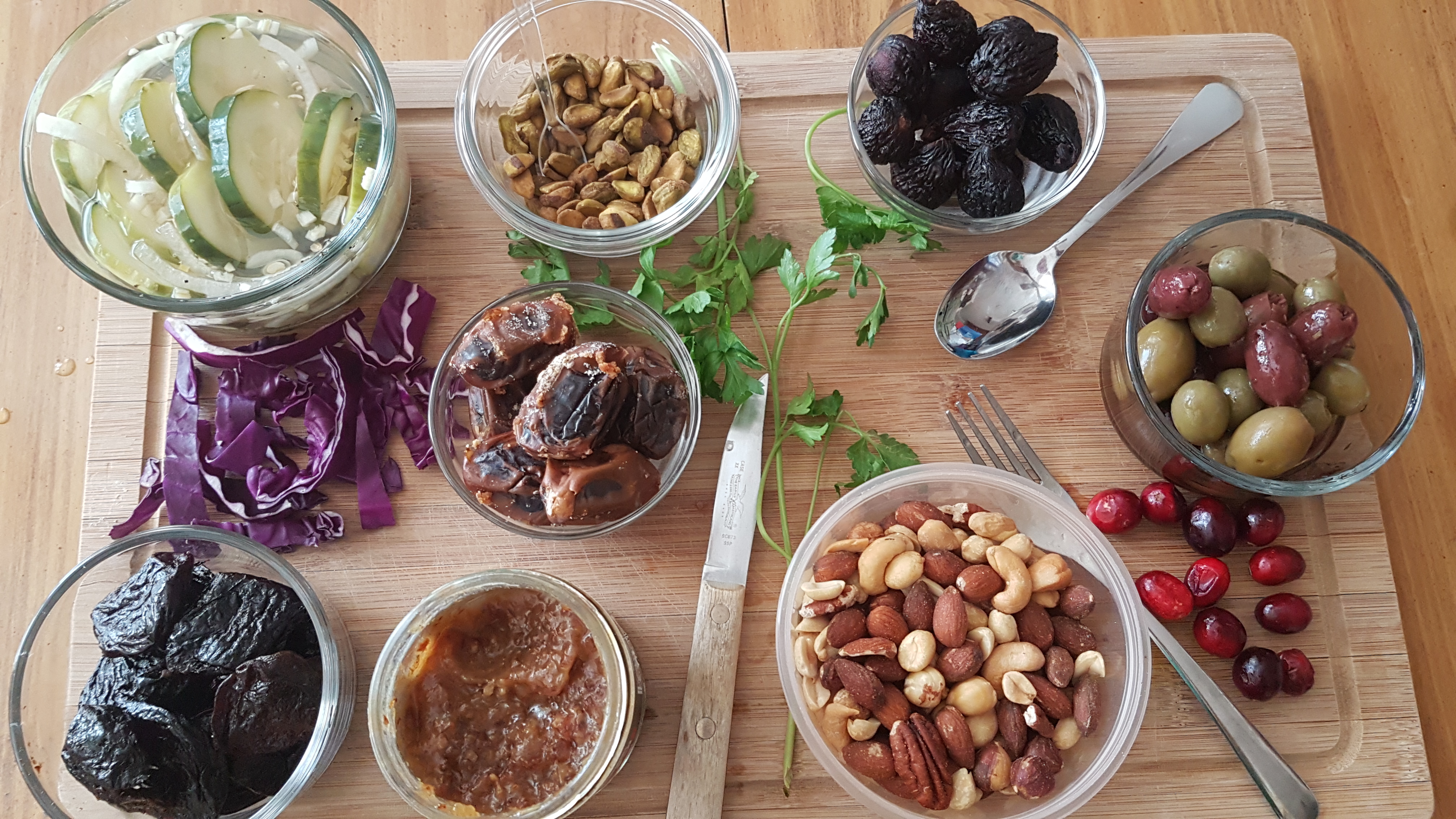 Then I had three different types of pasta (one of which was tri-color) and three sauces: marinara, pesto, and alfredo. That way people could mix and match with whatever they wanted; alfredo plus pesto was a popular combo. 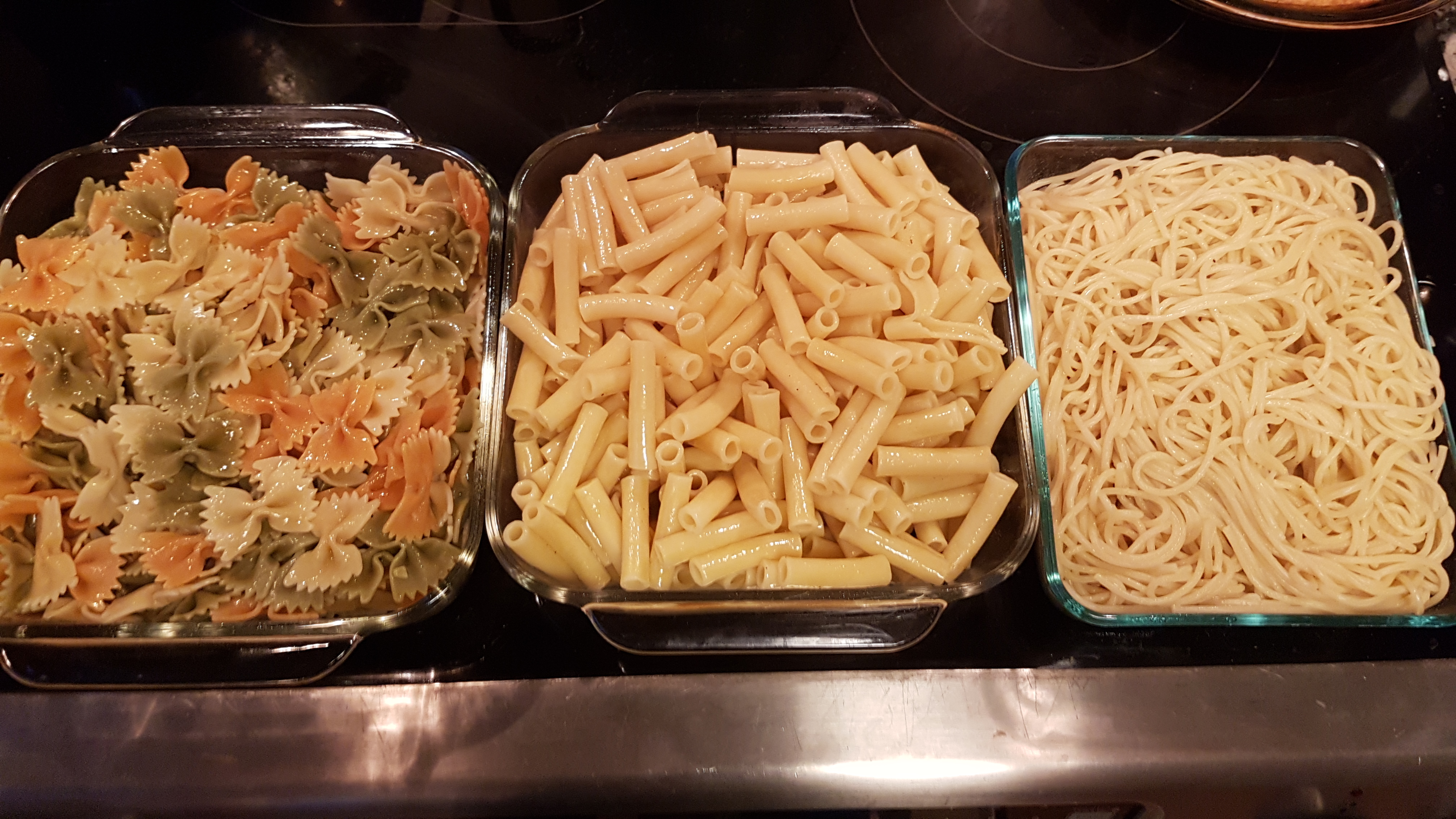 And for dessert, triple chocolate brownies with chunks of dark chocolate, cocoa powder, and chocolate sauce drizzle, and a Tres Leches cake! It was totally awesome and delicious. We had a great time chatting, and playing games late into the night. 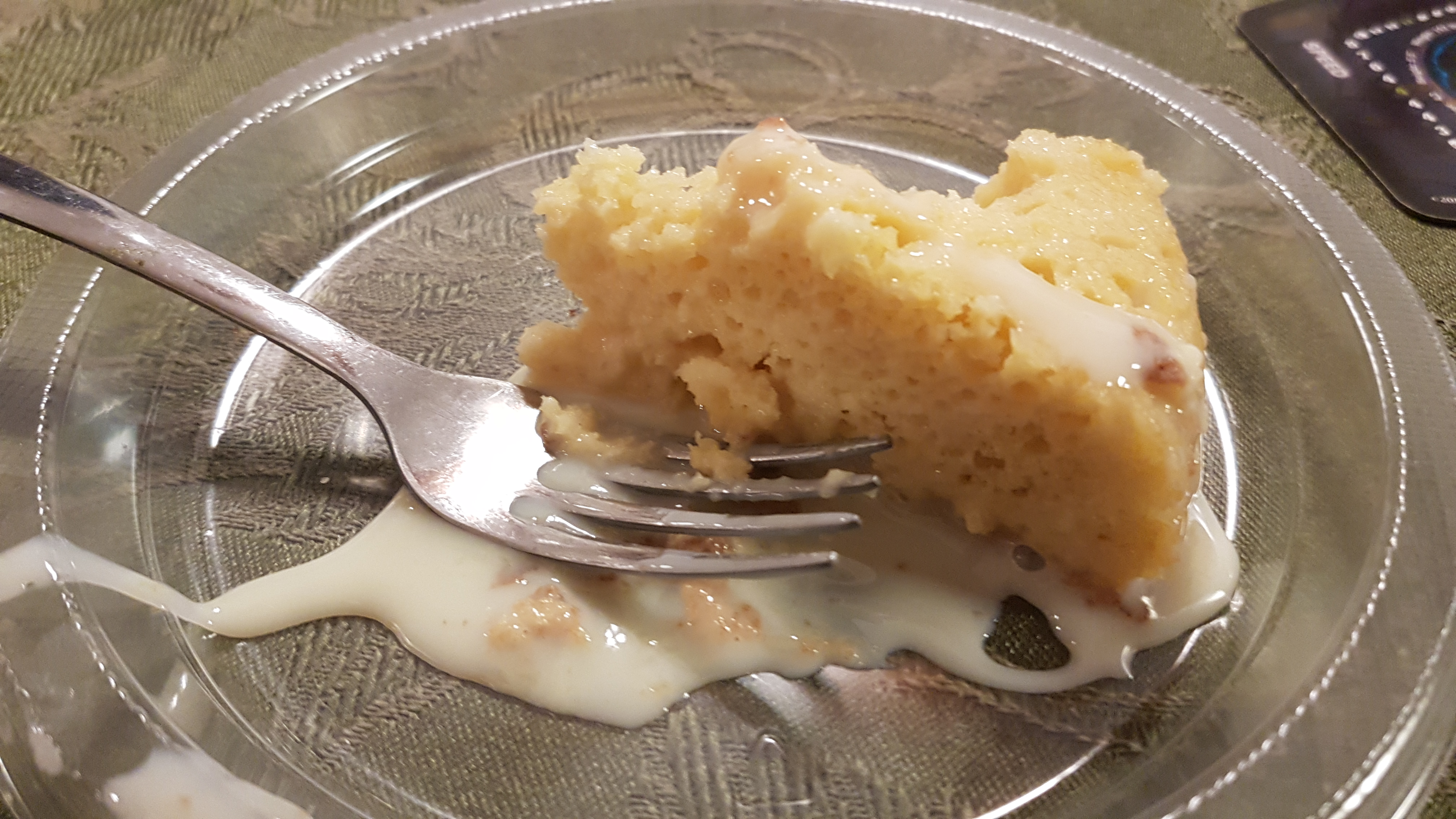 I paid for it on Sunday though! Good thing it’s supposed to be a day of rest, because I didn’t leave bed all day.

Breakfast – Oatmeal with golden raisins & craisins. I don’t know if this is a different type of oatmeal, but the individual oats keep their shape and don’t stick together well. Even after multiple rounds of microwaving. I like my oatmeal to be more mashed-together like, so I was pretty unhappy with it. But I ate it anyways. I’ll have to try it as overnight oats and see if that goes better. 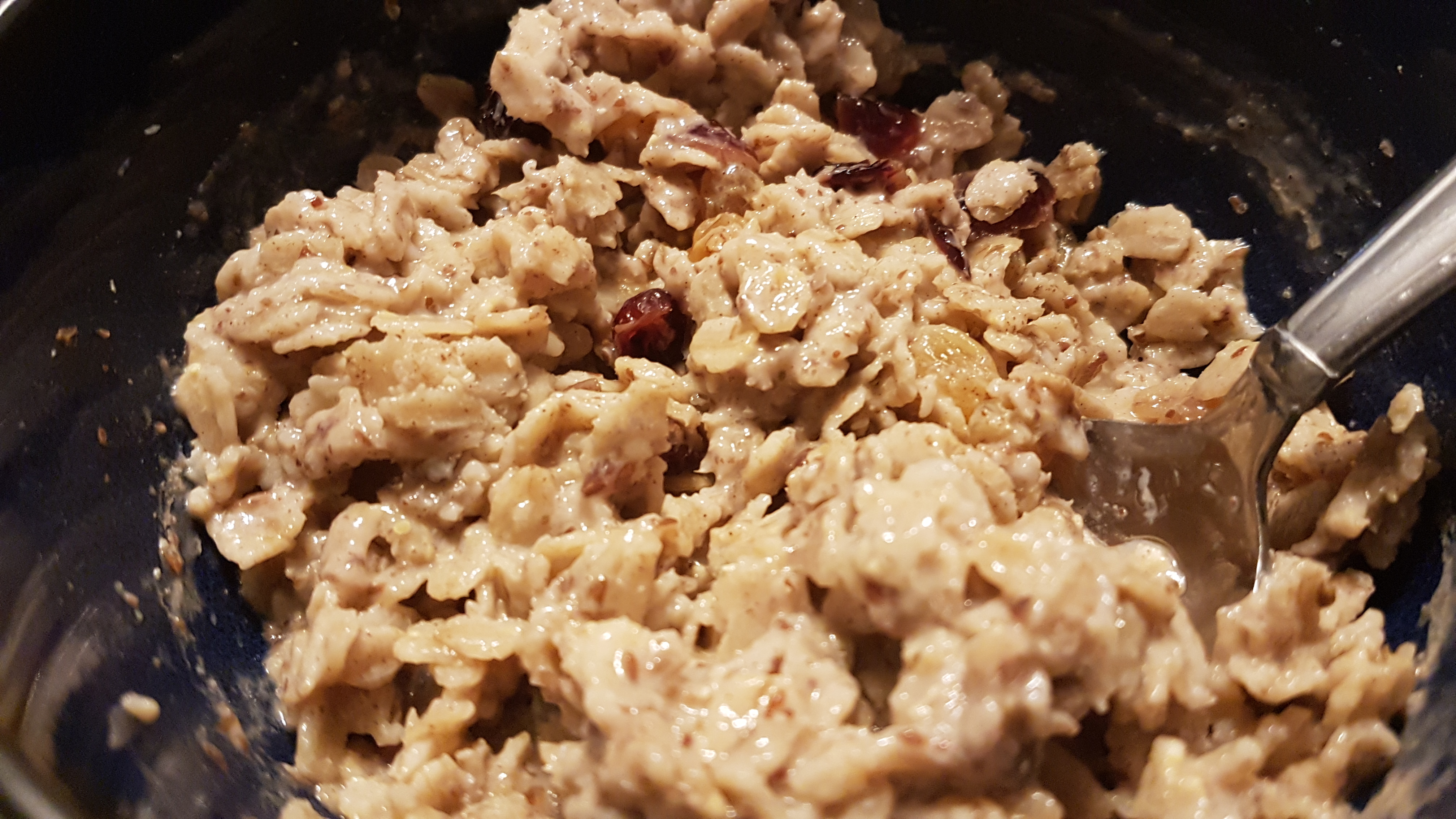 Lunch – Leftover pasta, made new by adding some veggies and shrimp from the freezer, with a lemon garlic sauce. 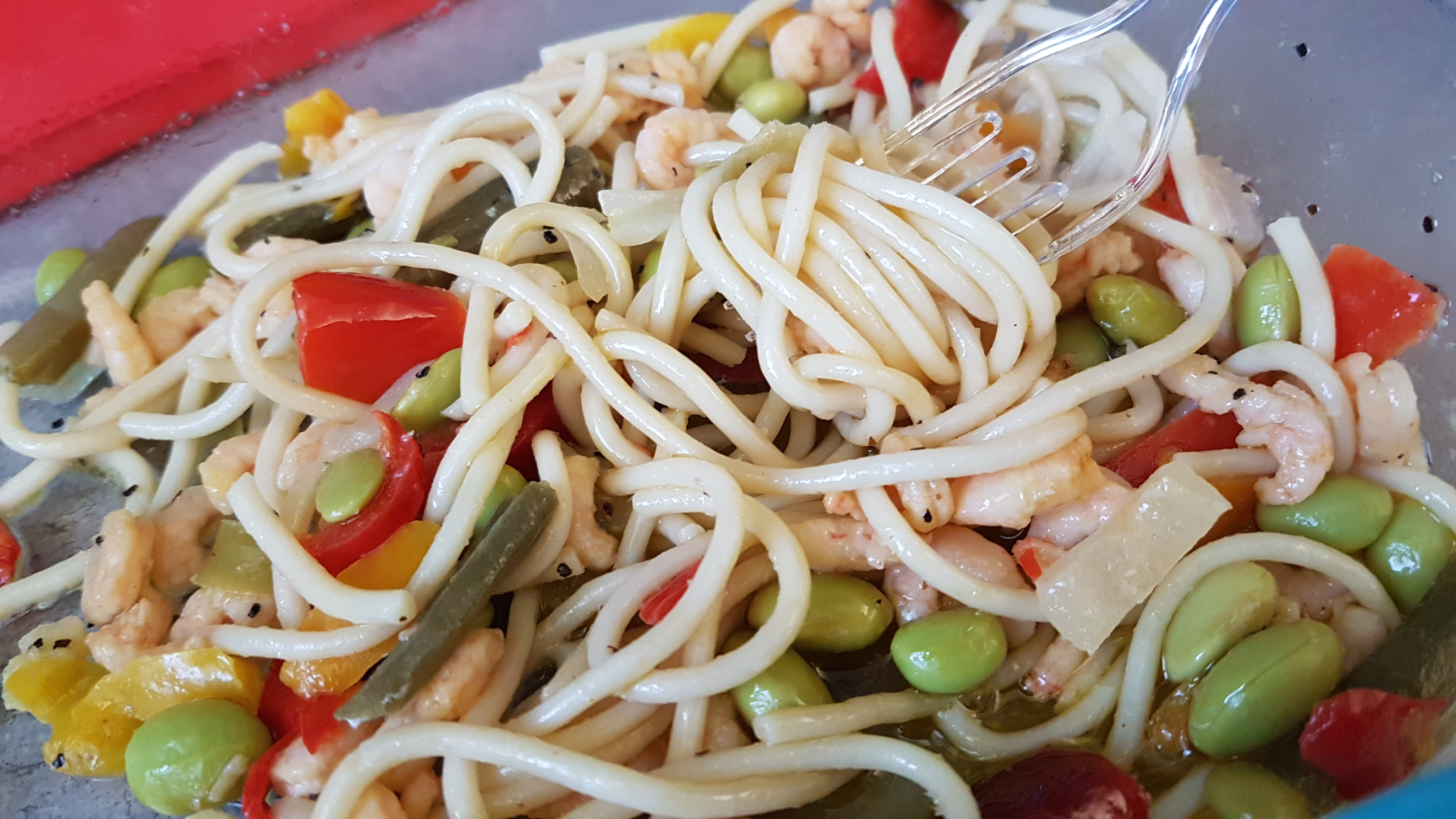 Dinner – Spinach Artichoke Melts + Tomato Soup. I had a ton of spinach artichoke dip left from the weekend, and read that one way to use it is to put it into a grilled cheese… well, hell yeah! 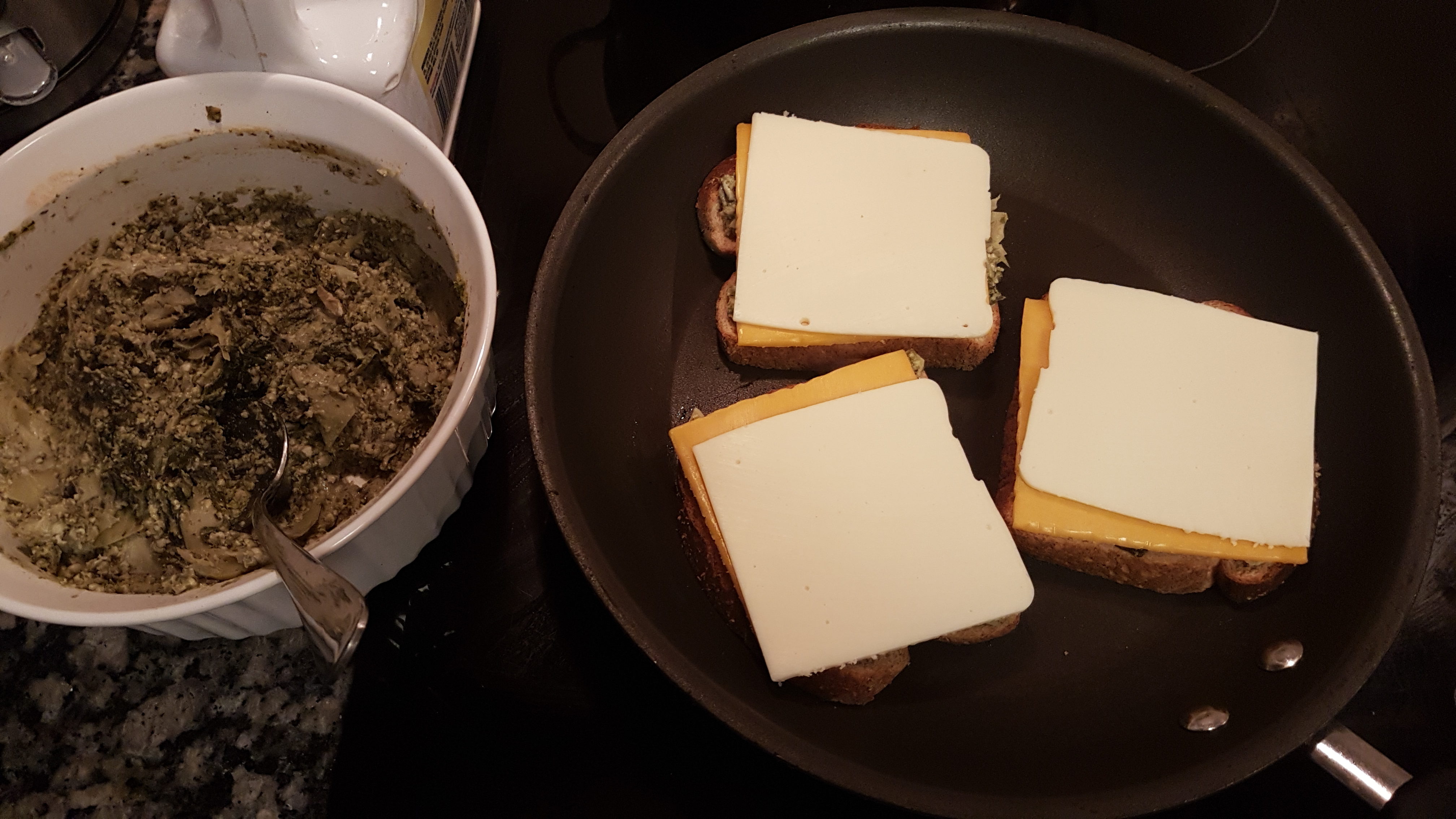 It turns out whoever wrote that is a flipping genius, and these sammies were hands down AHmazing. Not sure I can have a “plain” grilled cheese ever again… 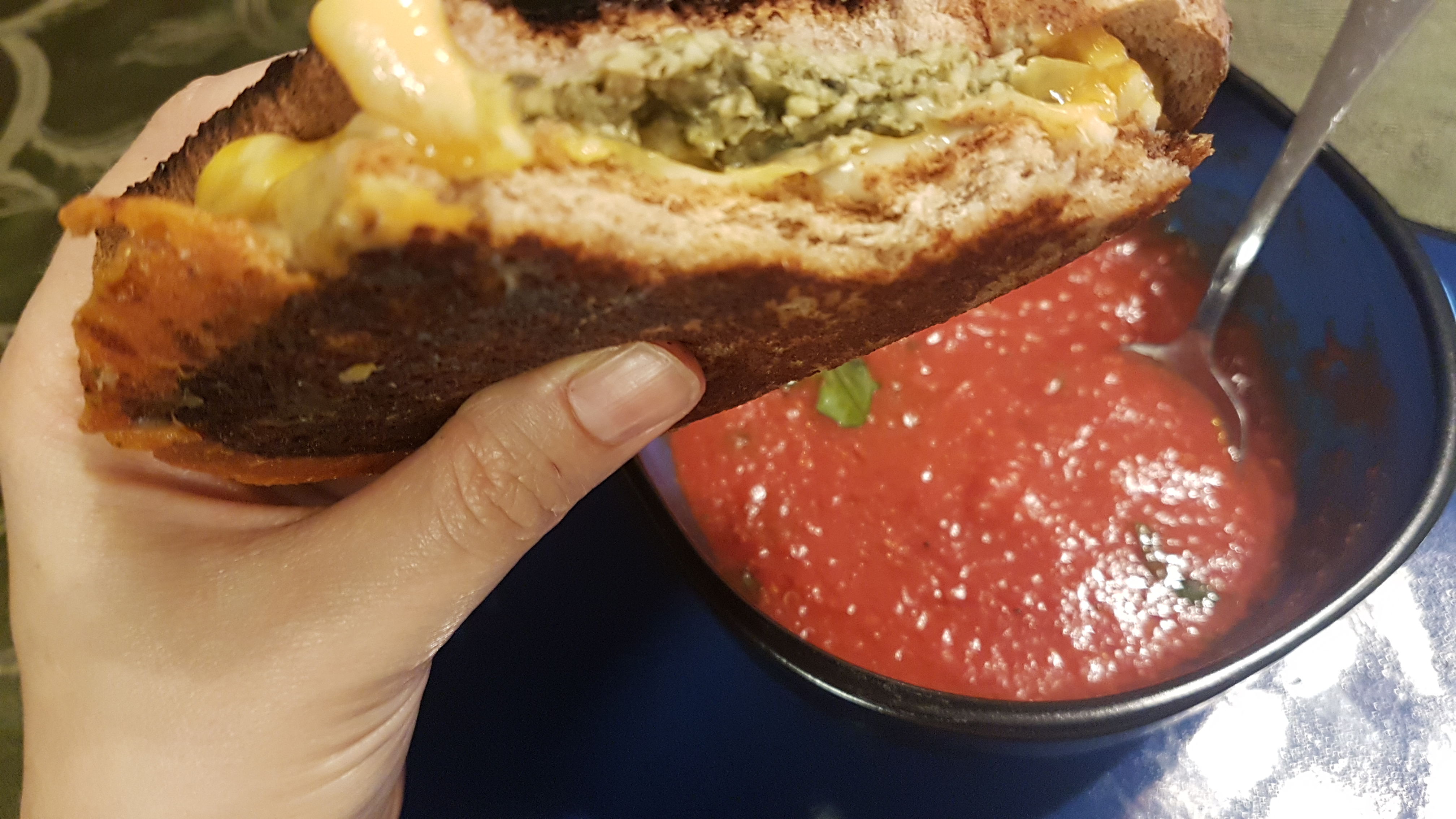 Snack – a chocolate peanut butter granola bar in the car on the way home. Good thing I put one in the pocket of every coat… 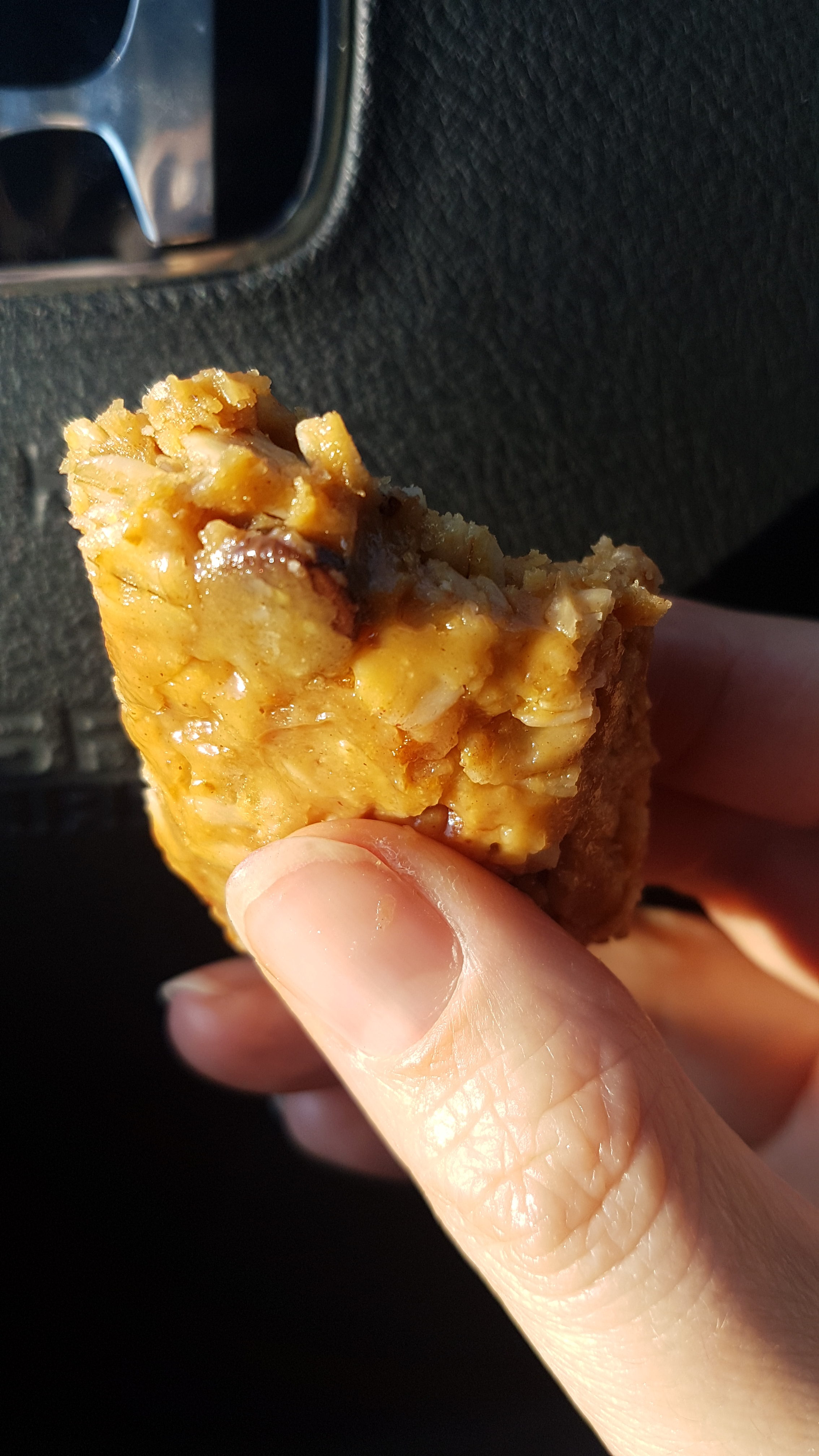 *Soaked beans overnight in the crock pot for tomorrow’s chili

Breakfast – Uh, so, I’m usually pretty behind the times with food trends. I’ve heard of “sweet potato toast” for years, where you thinly slice a sweet potato and just toast it like in a toaster. So I decided to try that. One of the slices ended up kind of charred on the end, and the other was evidently so thick that even putting it through the toaster four times, it was still crunchy… so I microwaved it for 2 minutes and that did the trick. 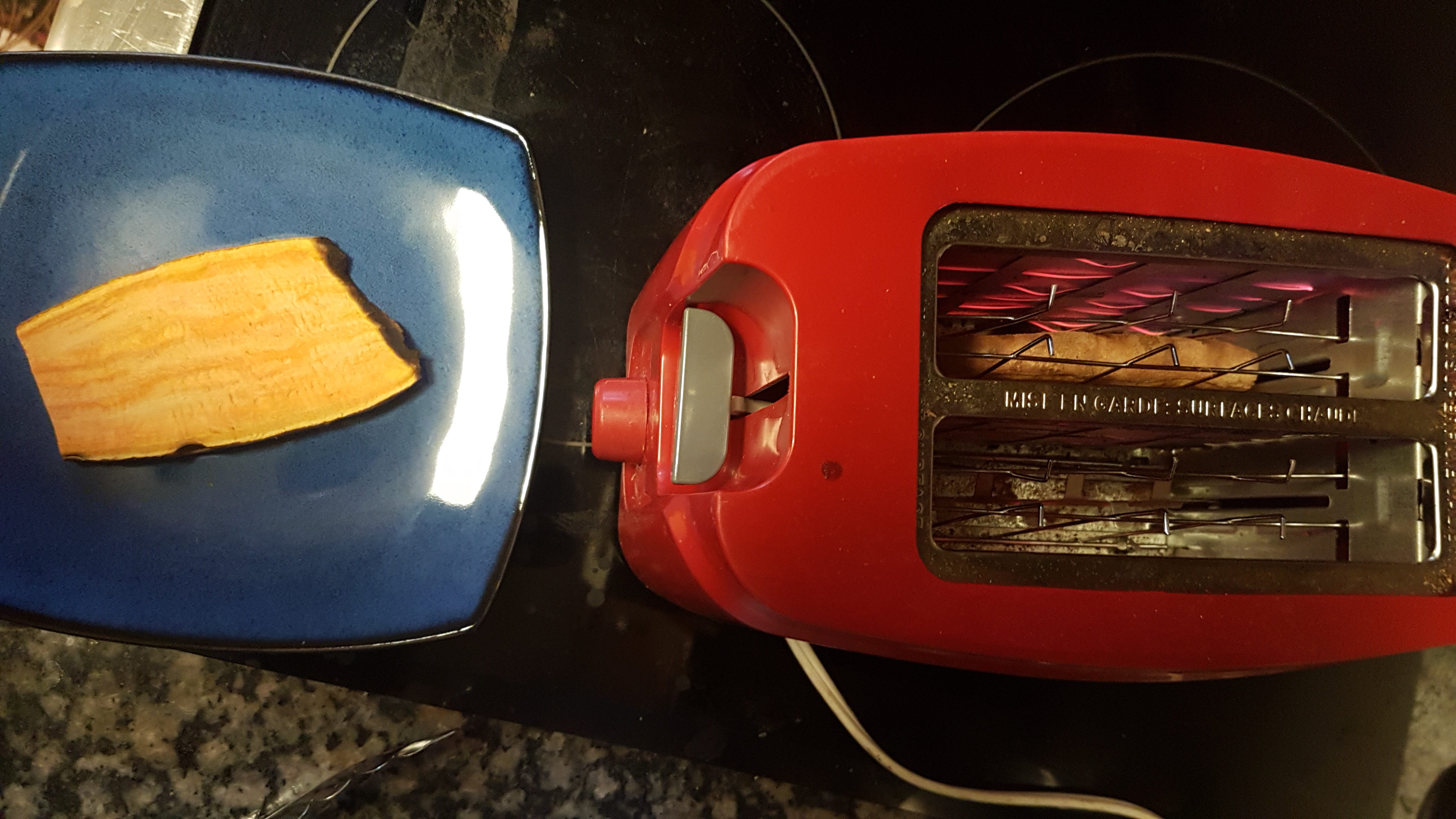 Once softened, it was pretty dang tasty. I spread a smashed avocado with lemon on one for the bougie-est toast ever, and then I had some more cooked white beans, so I figured, what the hell why not. DUDE. Why did no one ever tell me that white beans and sweet potato is a DELICIOUS combo?? With a squirt of lemon, sprinkle of salt, I was in heaven. New favorite. 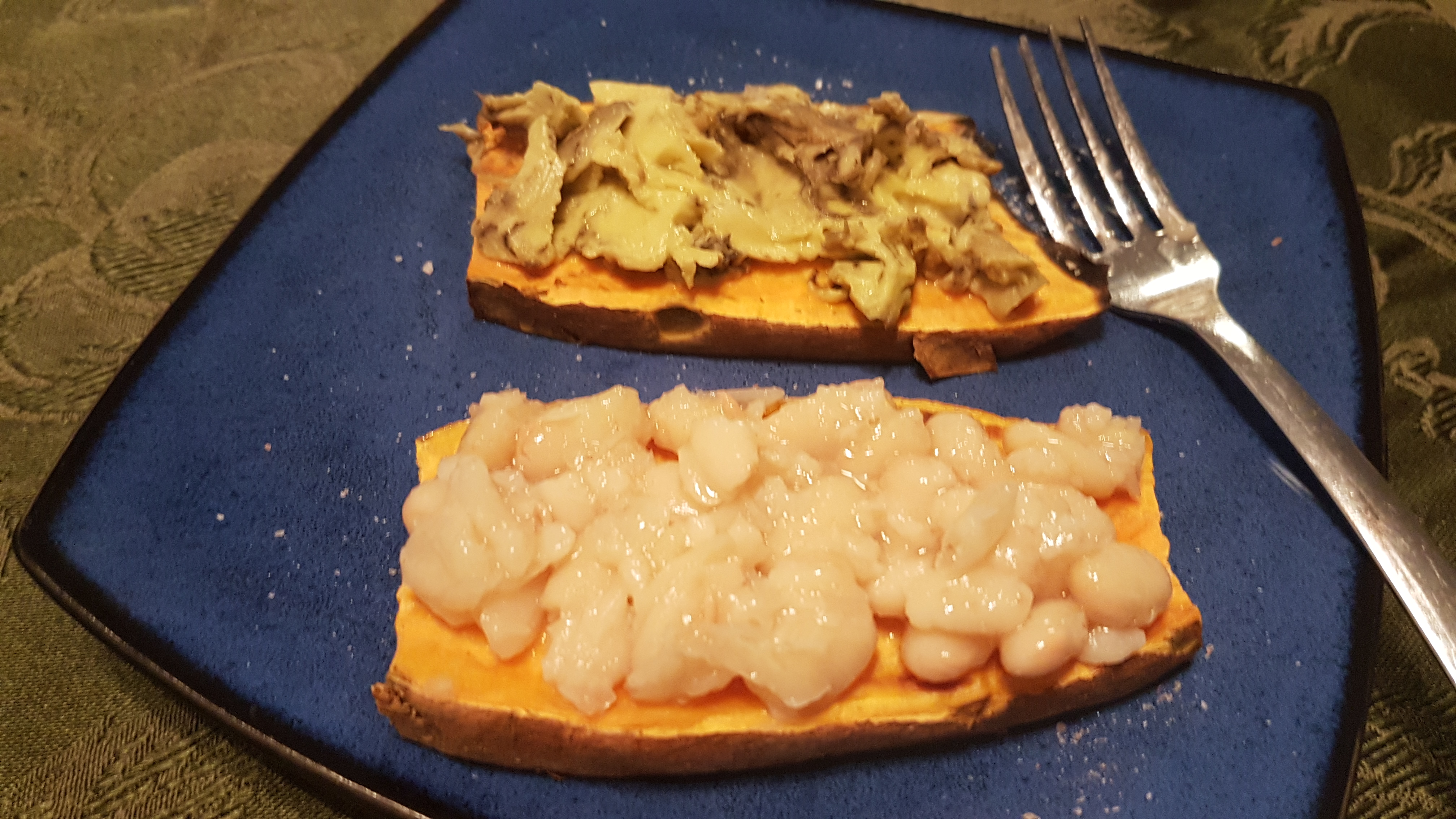 Lunch – I had bits of random veggies all over the fridge, and a batch of cooked rice, so naturally I whipped up a super quick stir fry. The boy was funny, he goes “awww I got all excited because it smelled really good, but then I look and it’s just vegetables”  😛 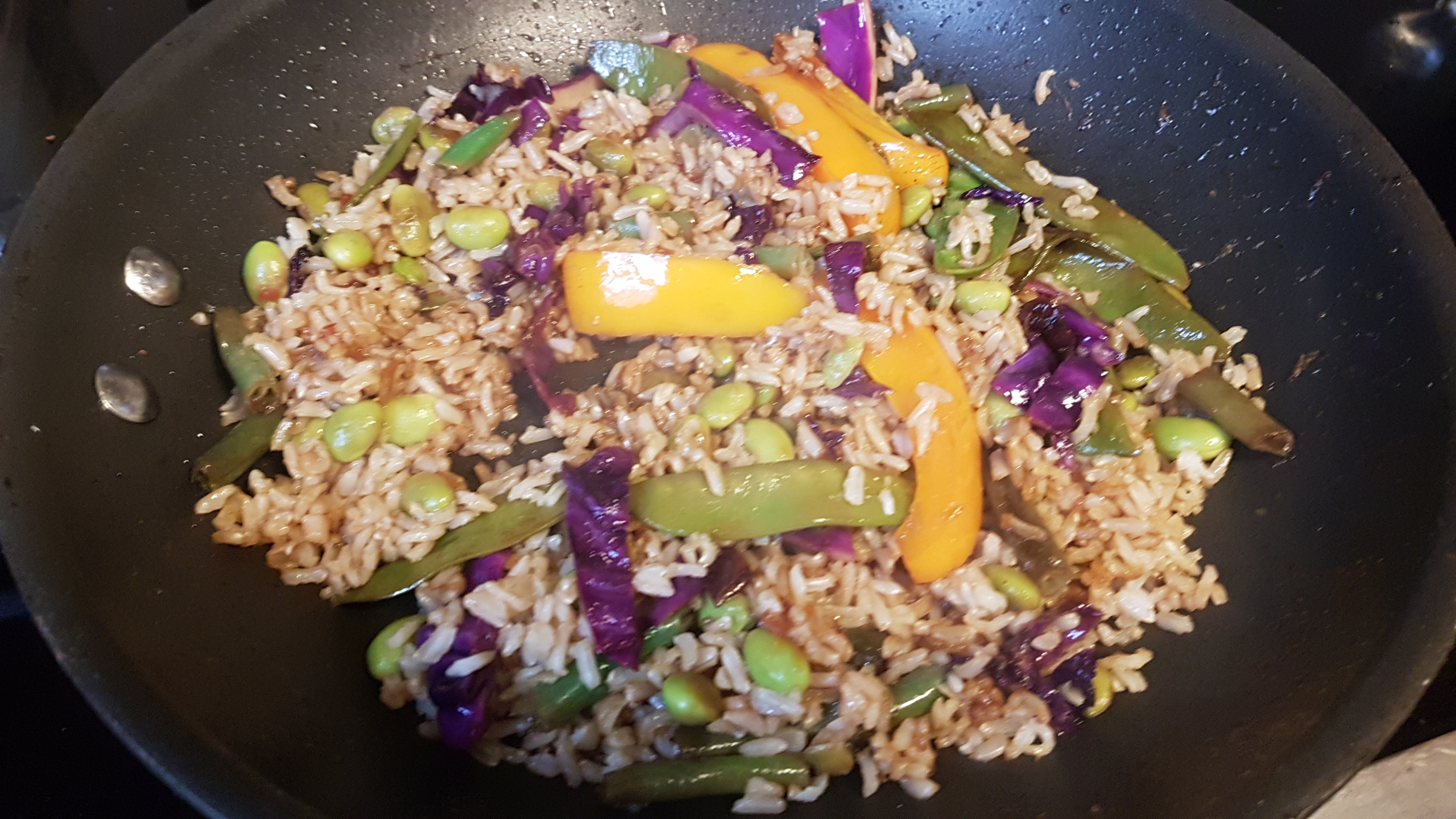 Dinner – Slow Cooker 5 Bean Chili. We stirred in a few spoonfuls of spinach artichoke dip too, just for funzies, and it was pretty ok. Not a thing I’d be sad about not having, but it used up more dip, so, win. 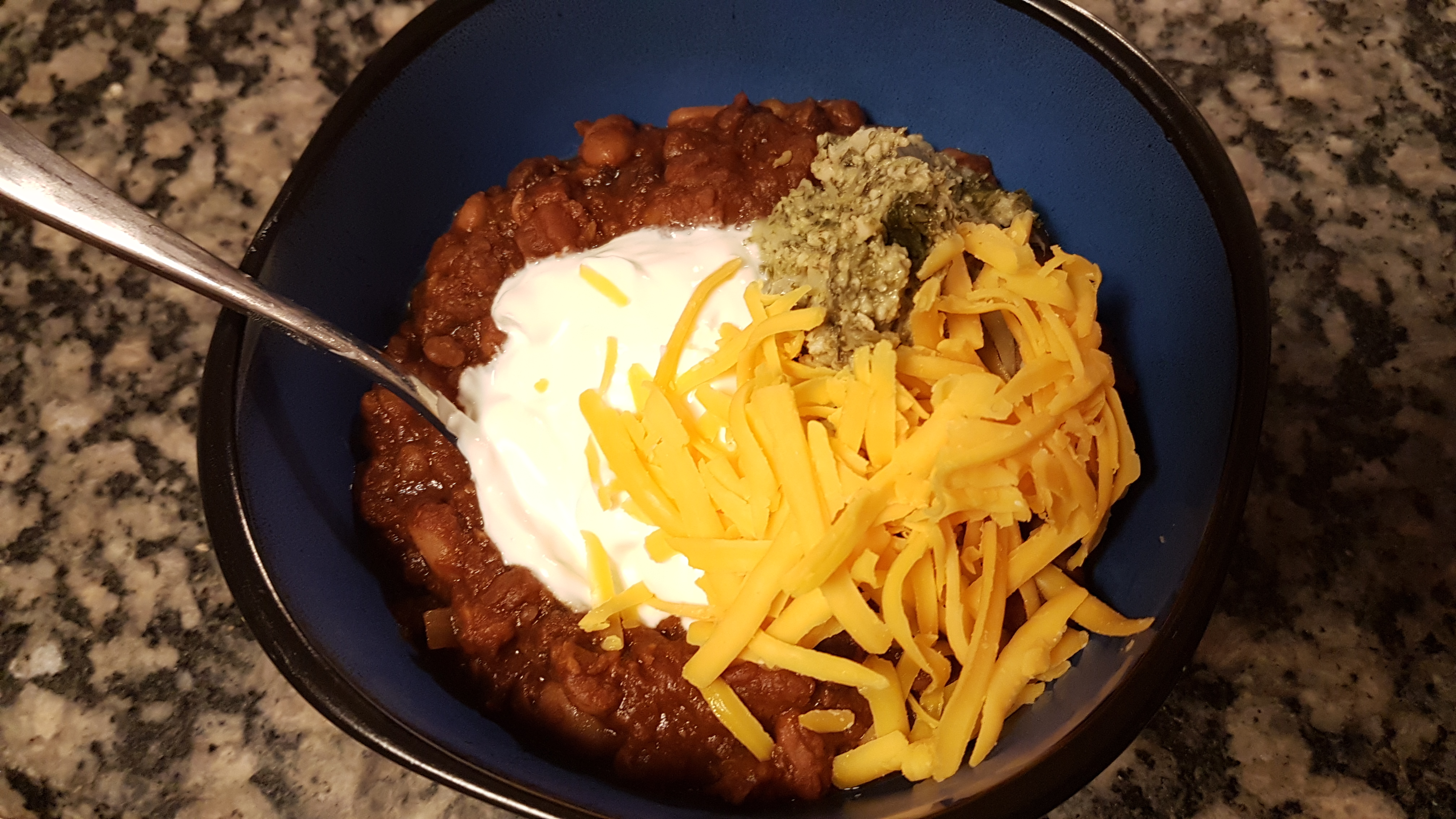 Breakfast – Pineapple Kiwi Green Smoothie! with a pear tossed in because it was bordering on spoiled. 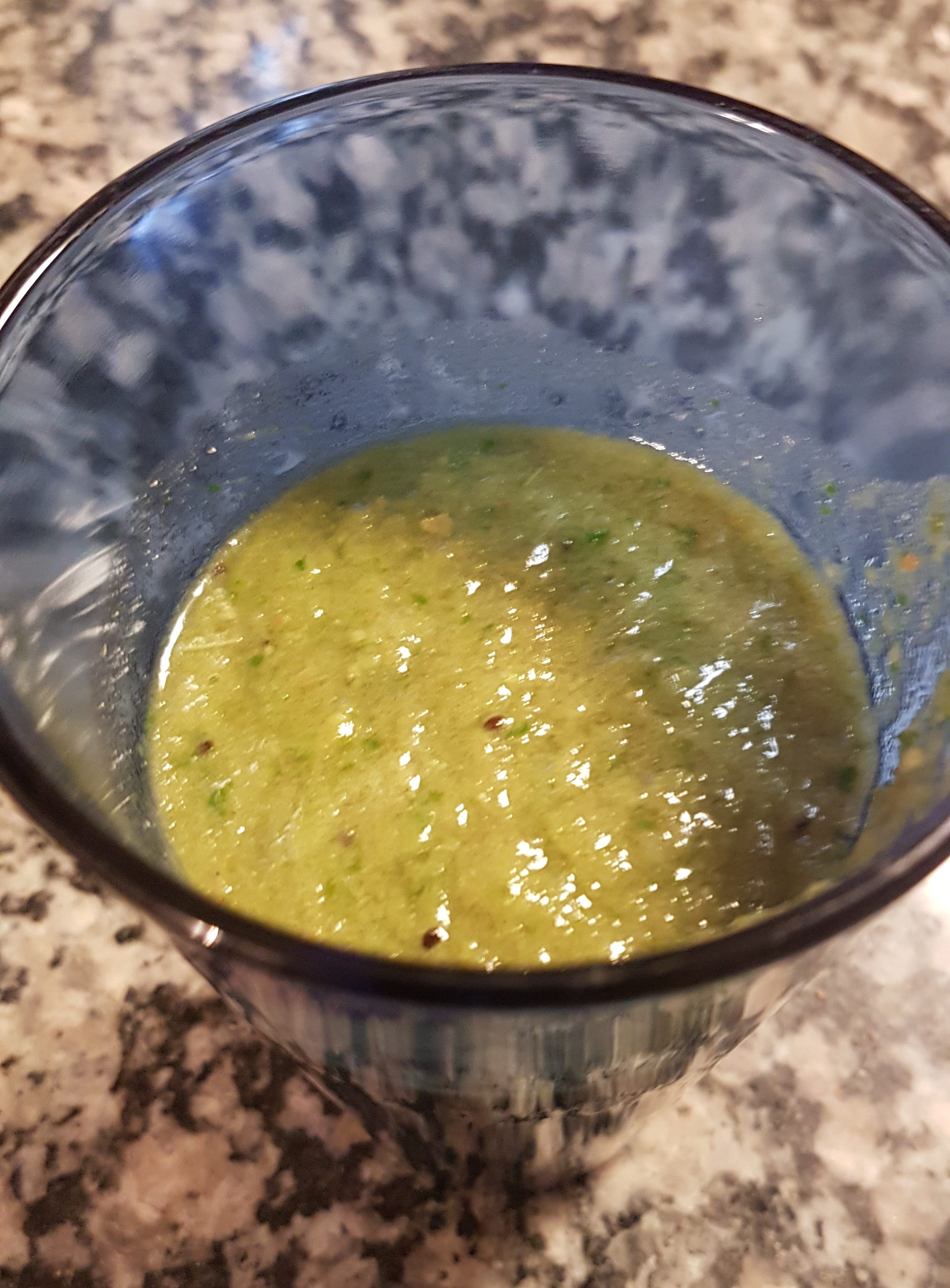 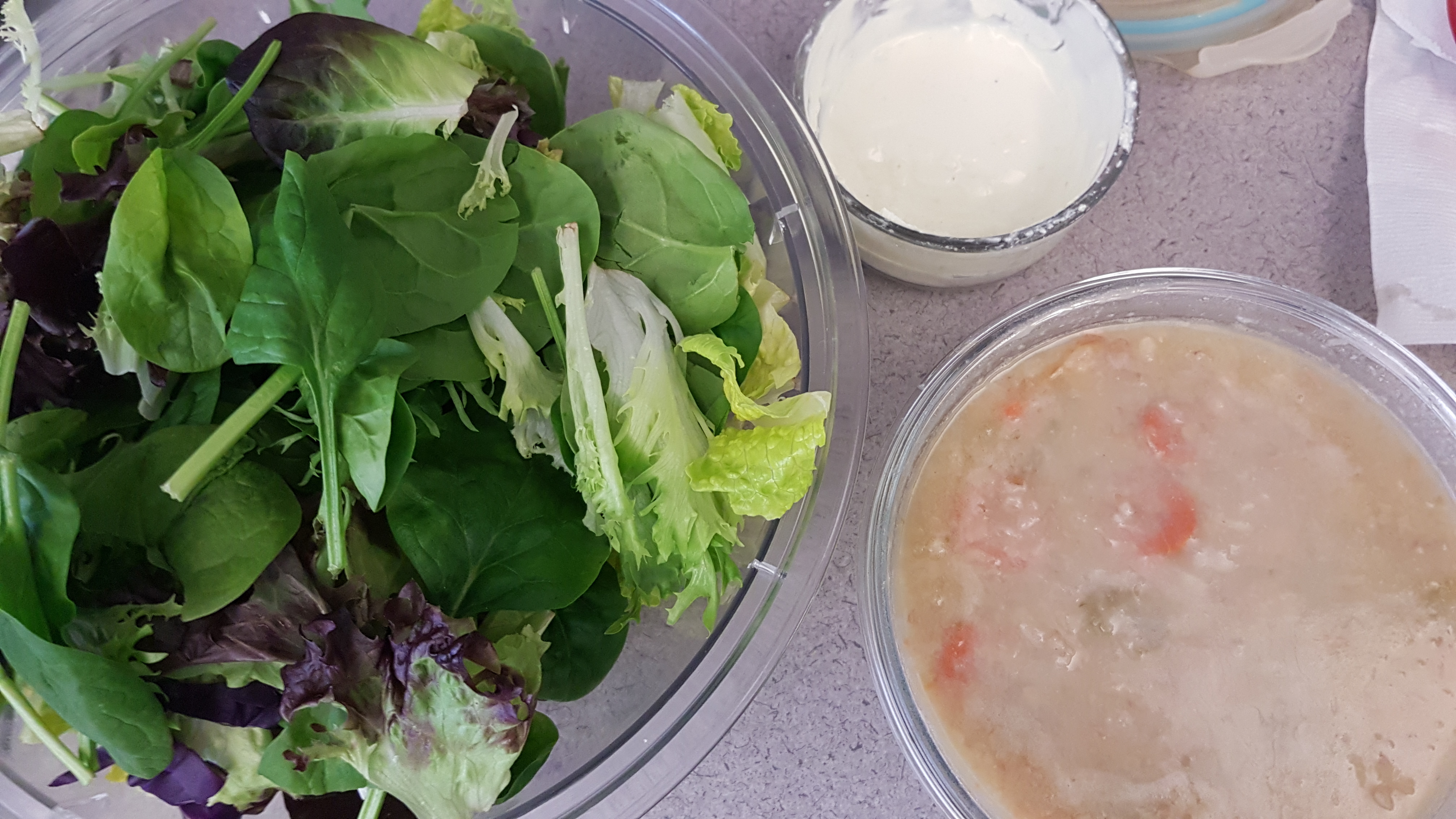 Dinner – Bowtie pasta with meatballs, of course. We had a LOT of pasta in the fridge… 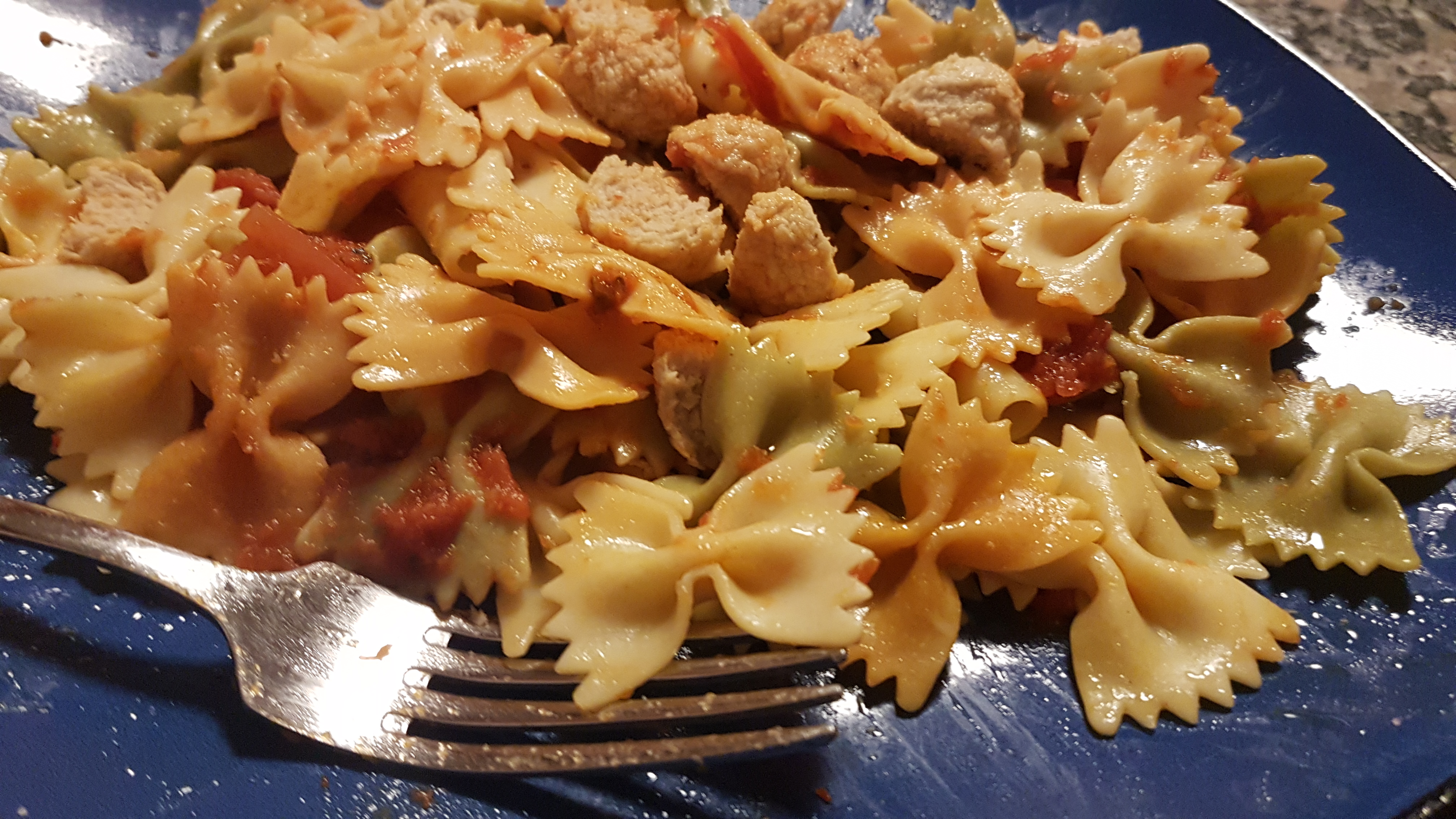 Lunch – Pasta with meatballs, a salad, with roasted sweet and hot Brussels sprouts 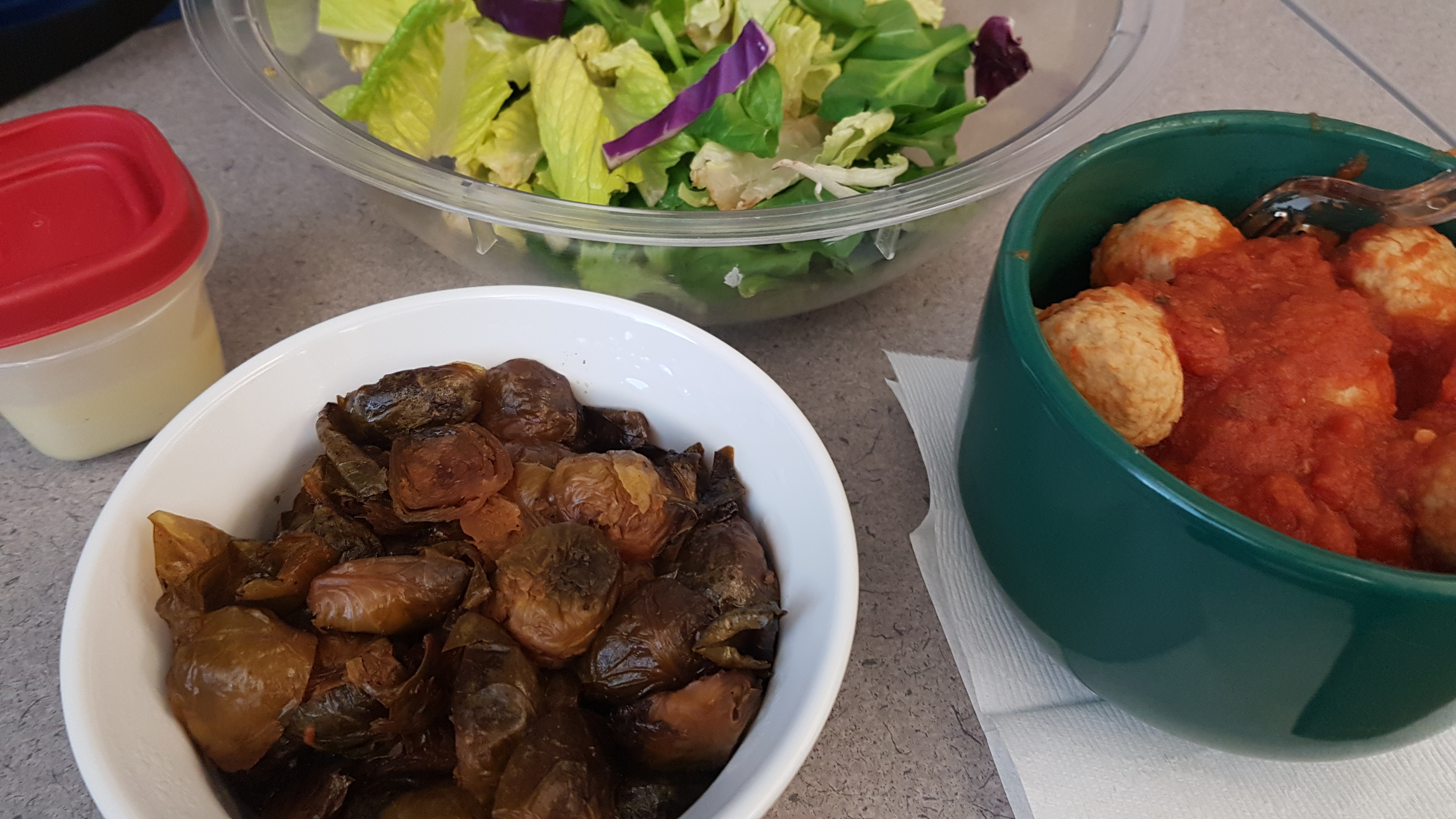 Dinner – Roasted beet & sweet potato veggie burgers. I used cooked brown rice and breadcrumbs as the binders, and tossed in the little bit of cooked white beans left along with the roasted beets and sweet potato. These were softer than the last batch but I liked the flavor better. Still working on the exact right blend. 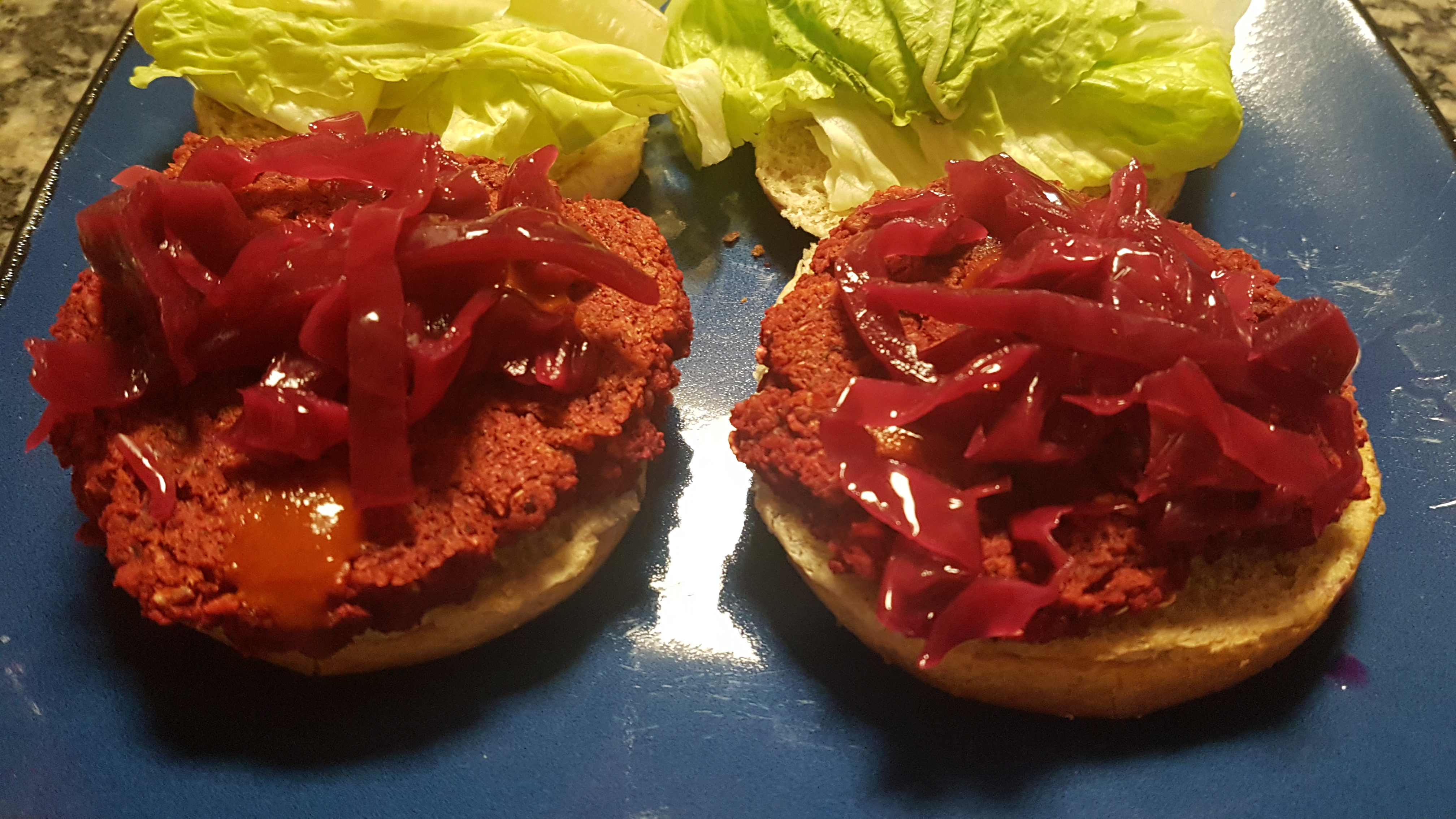 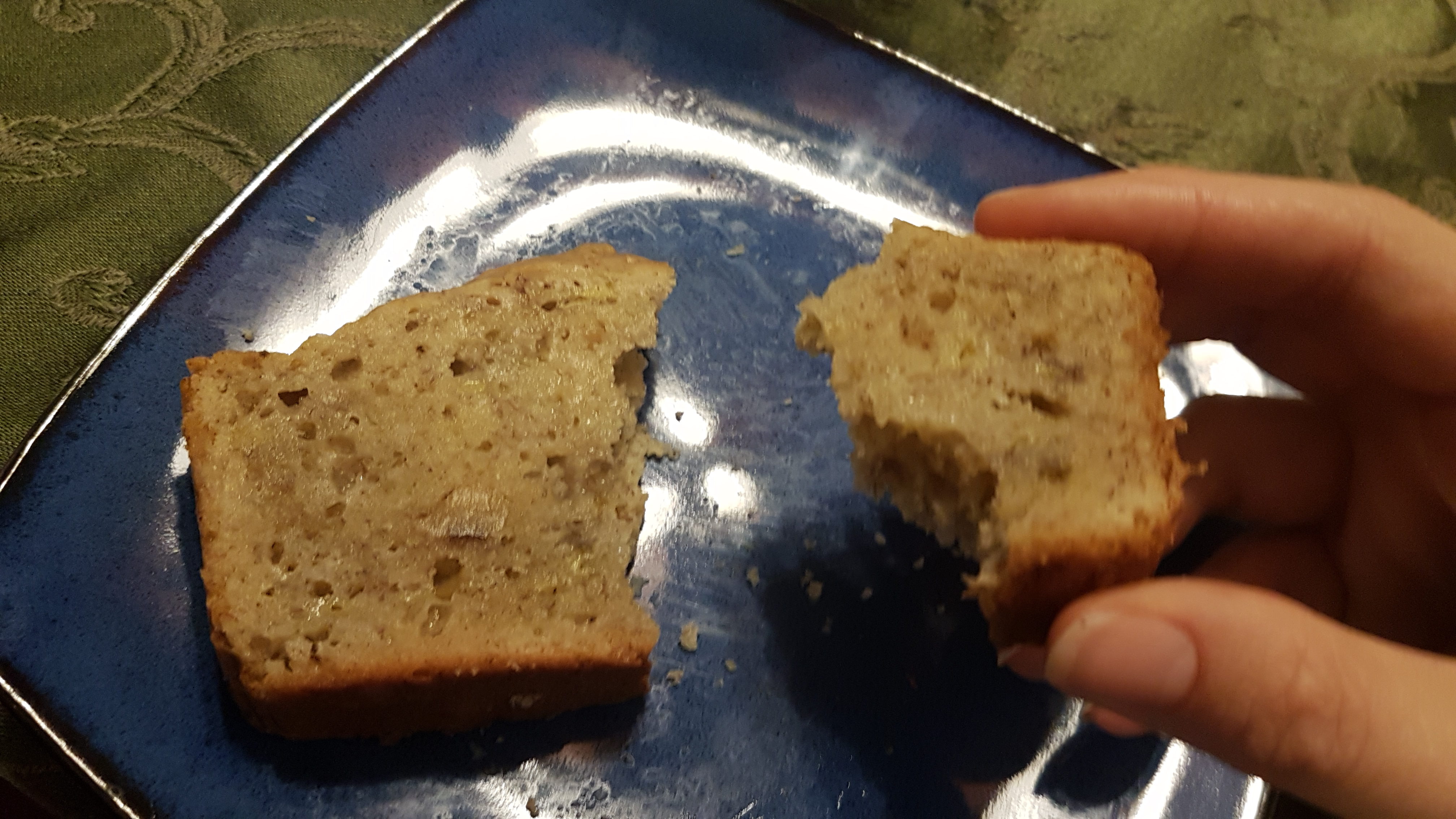 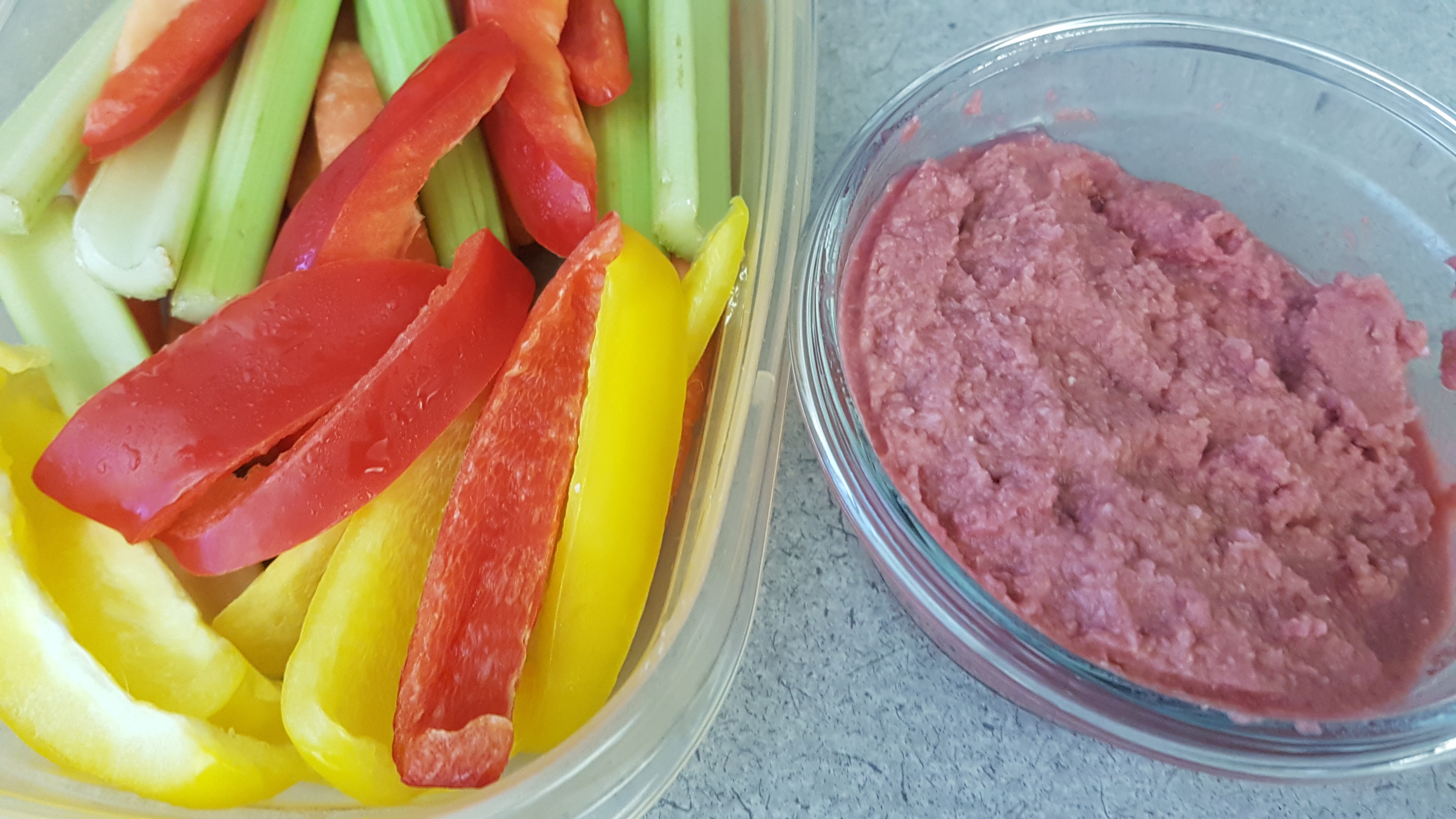 Dinner – Pizzas! Pork and pineapple for the boy and a veggie for me using the last of the artichoke dip and some peppers and olives 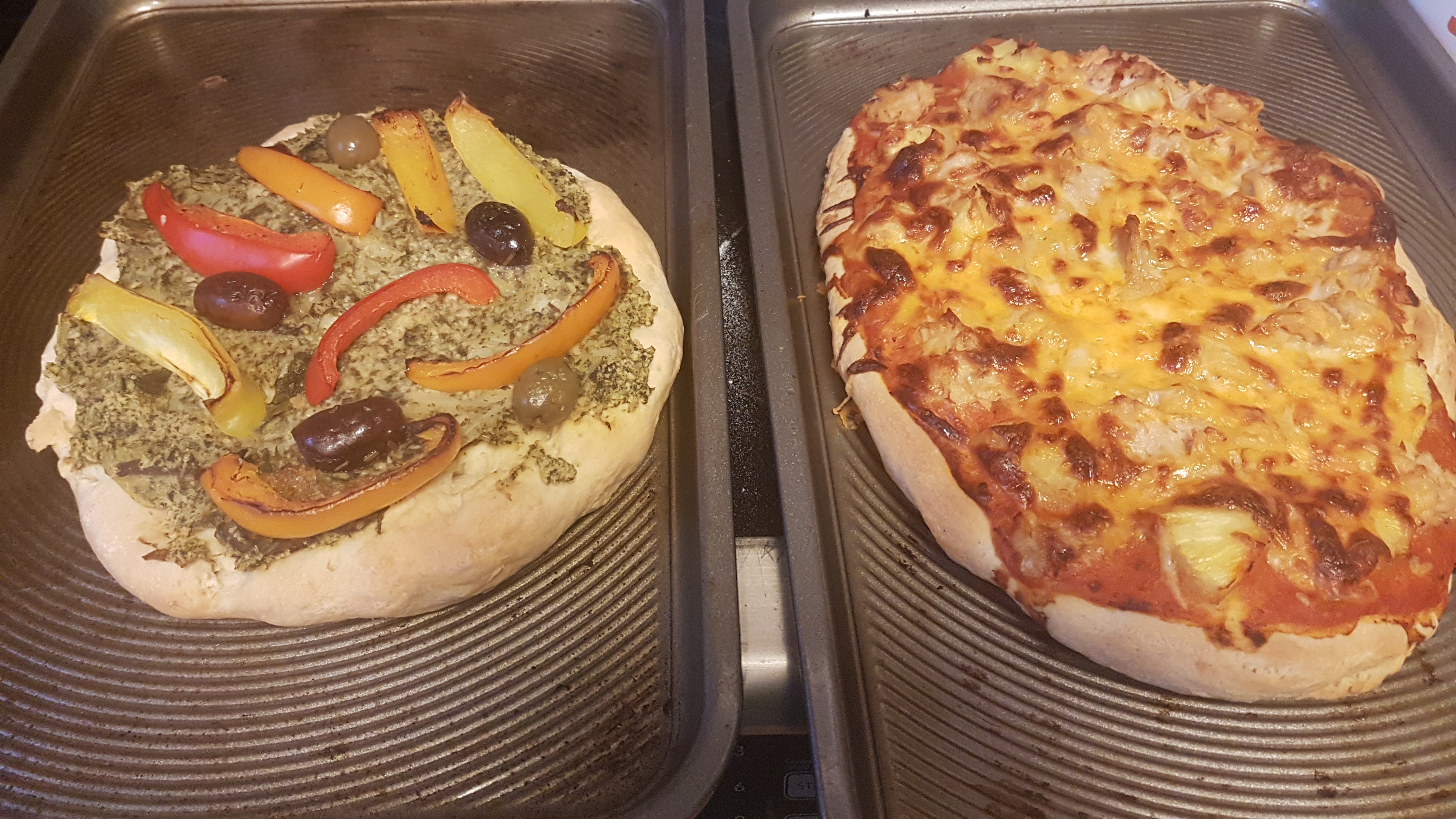 Saturday is a lazy day for me, but the poor boy has to work the weekend. A big project launched this week, and he is ”on call” for fixing all the things. So I’ll be cleaning the house, lots of grocery shopping, and prepping for Sunday.

Sunday I’m having a tea party!! If you know me on Twitter you’re probably already aware, I am simply bursting with excitement! I adore parties, and tea, and tiny sweet and savory snacks. I’m super pumped to have a half dozen lovely ladies over in our Sunday best to sip oodles of tea, use terrible fake British accents, and talk about life. Hopefully it will be an absolute blast and become a regular thing.

And guys, I realized, I have a serious tea problem… I’ve always loved tea and everyone knows it, so between being unable to stop myself around new flavors and gifts from family and friends, I have amassed a formidable collection. The newest addition, of which I am most proud, is this gorgeous porcelain cup and saucer: 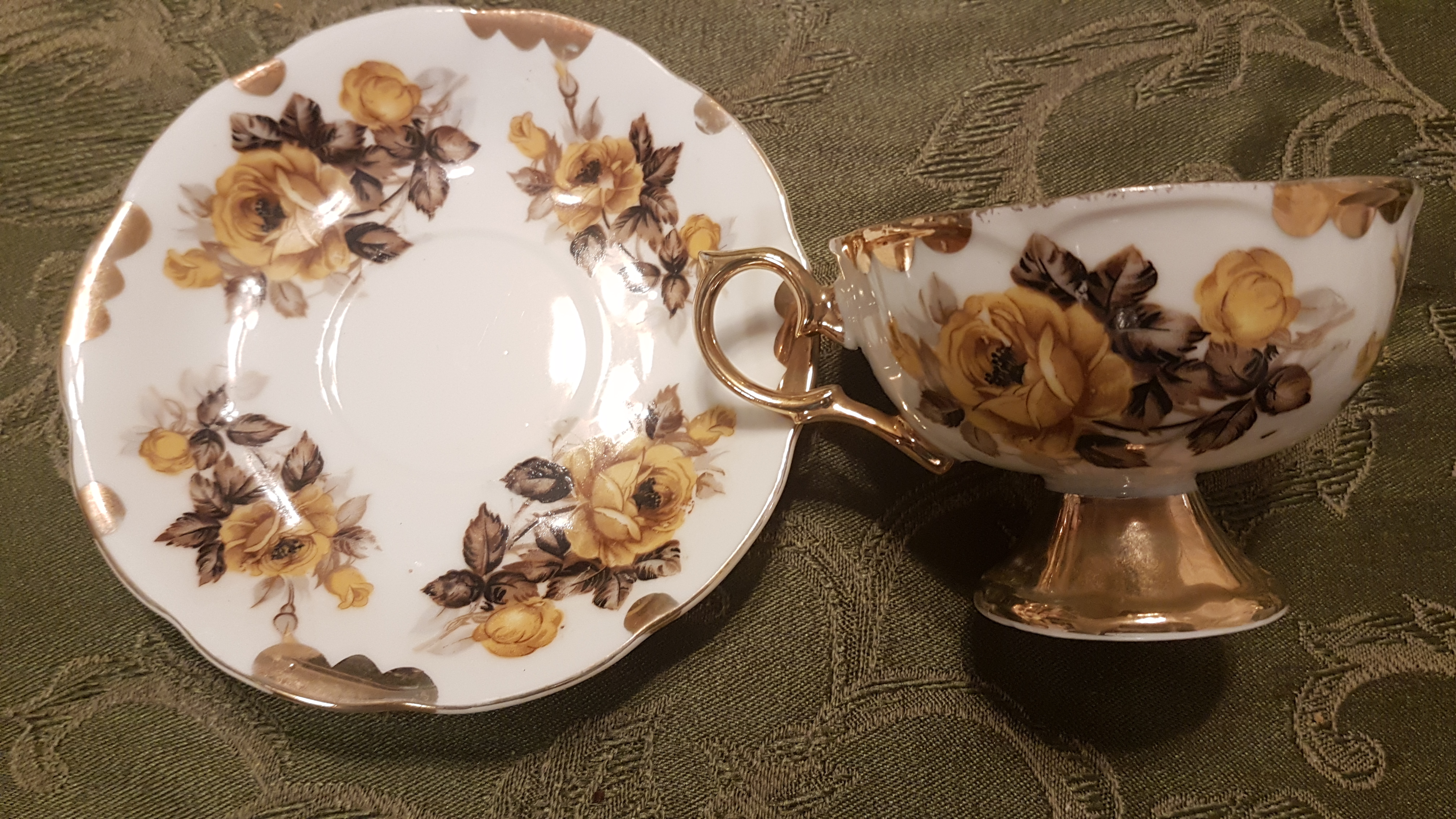 I was at the thrift store, and sifting through the housewares section (honestly, in search of a tiered serving tray for this party, which I sadly did not find). The cup jumped out at me with its’ royal pattern and those big yellow roses just immediately made me think of Beauty and the Beast. I had to have it.

I carried the cup around the store another 2 aisles, hoping to find a saucer that looked at least okay with it, but it was coming home with me regardless.

And then, when I was about ready to give up and leave with my few gems, I saw on a lower shelf THE MATCHING SAUCER! It was clearly meant to be. The universe wanted me to have this set. And for only $1.48 total, how could I say no?!? 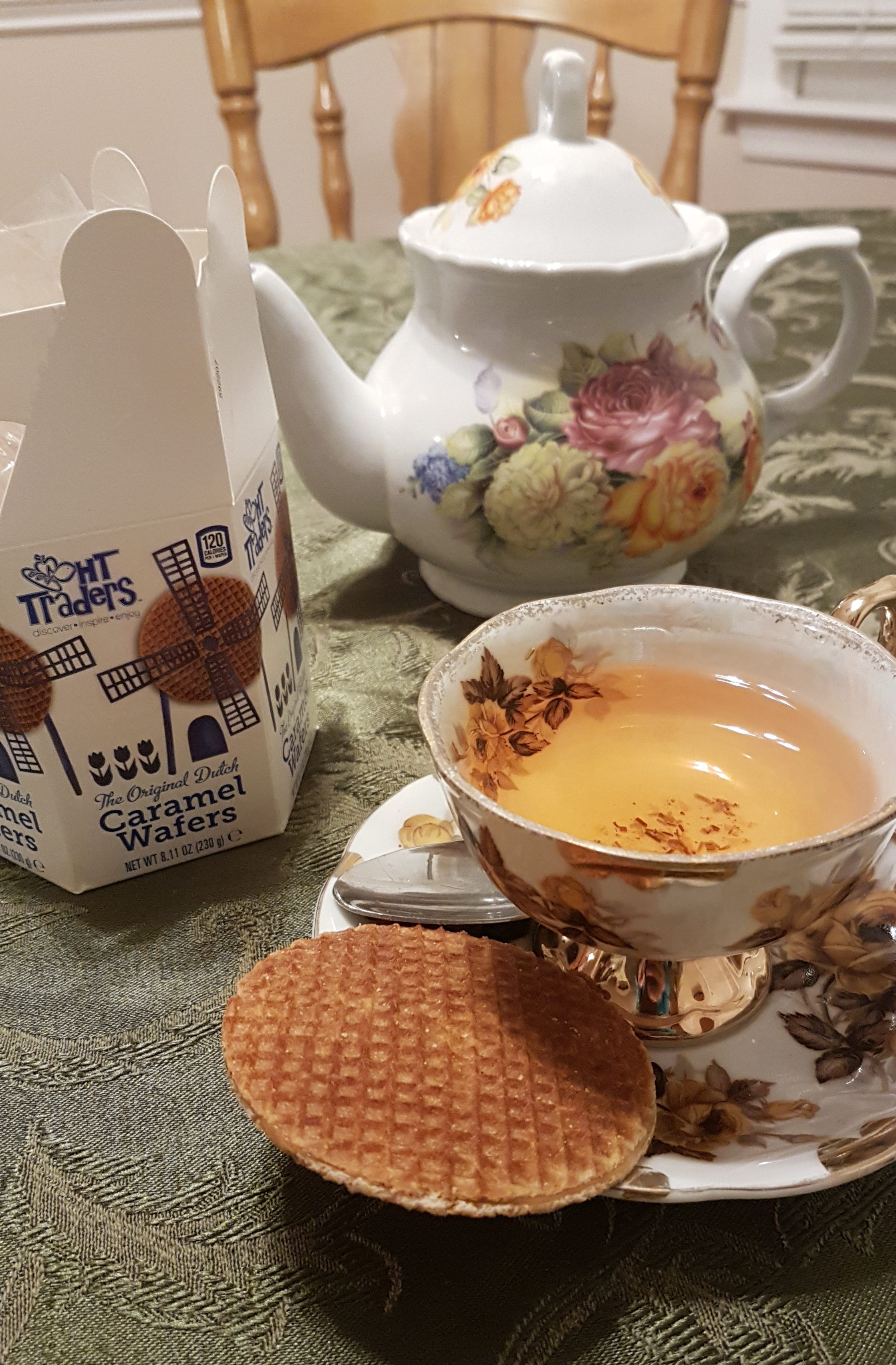 Man I’m excited about this week, pretty much nailed it! Even with the impulse purchases and tons of produce we came in at our $75 goal. I’ve also decided that alcohol gets its own category now, so the booze we got for our dinner party was not included here.

I did totally give in to temptation at the store when I saw a whole shelf full of Stroopwaffles! I held a box in my hand, then put it back, almost walked away… picked it back up… and then put it in the cart. At least I checked the “per unit” prices, and though the bag full of tiny waffles was close, the not-individually-packaged box of 8 was the best deal, so that is the one I chose. 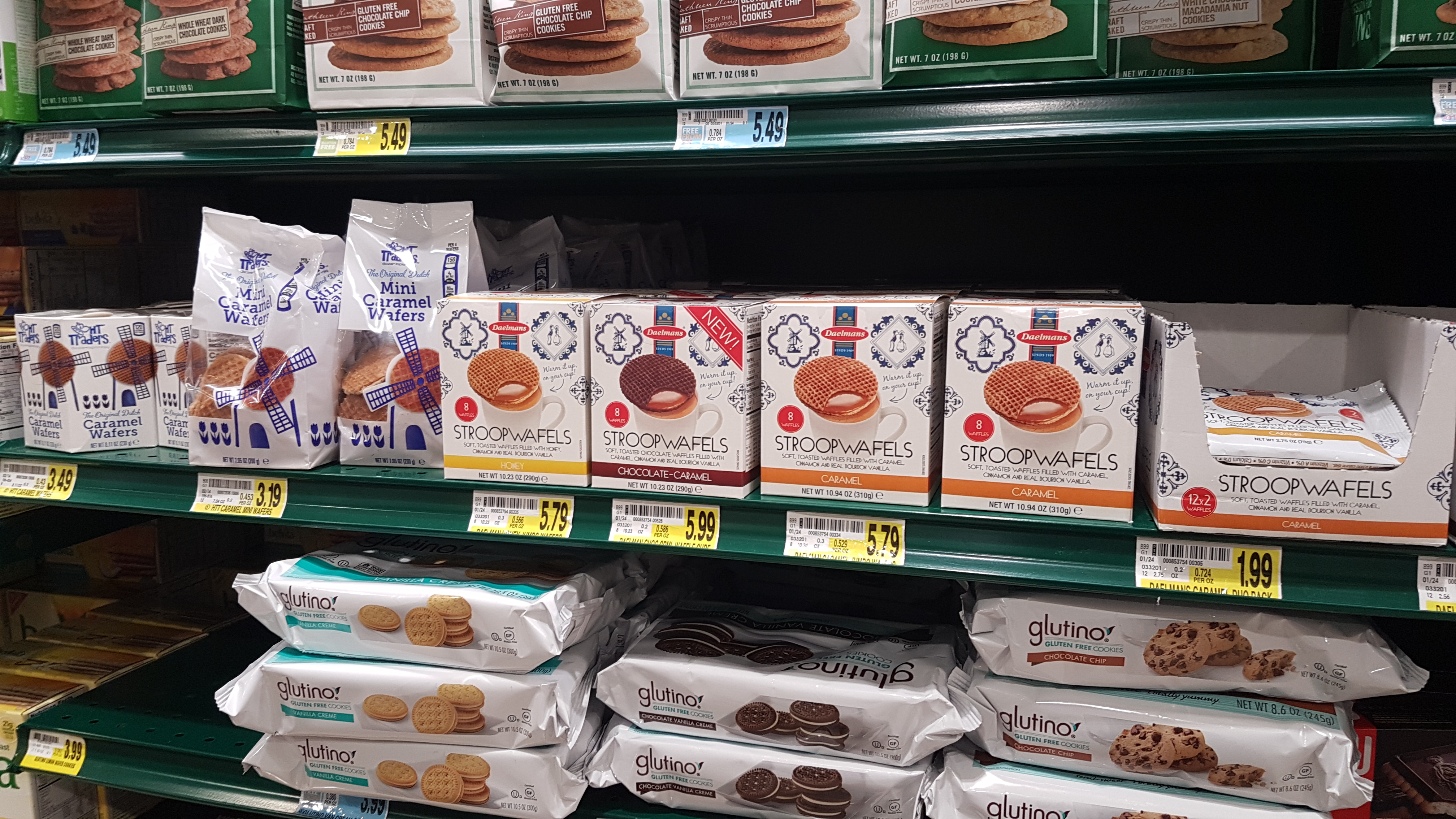 Part of me wants to add breakfasts into the meal plan. But then the other part of me knows it is currently the least predictable part of my day. Some mornings a smoothie sounds amazing, other mornings toast is the only acceptable answer. And more and more frequently lately nothing at all sounds good, so I just open the fridge and force something in my face because I can’t in good conscience not eat breakfast at all… c’est la vie, we all go through seasons of eating.